“No Contest (bicycles)” is among Noah Purifoy’s most iconic assemblage art pieces.

Palm Springs’ recently reinstalled statue of Marilyn Monroe is drawing crowds and shining a spotlight on the city’s vibrant art scene. From the controversial, 26-foot-tall Forever Marilyn—now an Instagram selfie shrine in front of the Palm Springs Art Museum—to a trove of upscale galleries in the Design District, the city is truly a paean to the eclectic community’s trademark mix of creativity, sophistication, and, yes, even, eccentricity. And beyond this urban art lovers’ oasis, the desert is strewn with radical, offbeat art installations that give a whole new meaning to plein air art. Once you’ve scratched your Seven Year Itch, hop into your car to check out these 5 places that add color to the surrounding stark landscape. The best part? All of them are free.

Arriving in Bombay Beach, it’s hard to imagine that this postapocalyptic-looking ruin on the eastern edge of the Salton Sea was a ring-a-ding-ding water-sports resort popular with Frank Sinatra and Company in the swinging ’60s. It then sank into desuetude, its dusty streets lined with rusted cars, dilapidated trailer homes, and ruined buildings adorned with graffiti. Today, the forlorn former paradise at 226 feet below sea level is luring tourists back with its surreal eye-popping installations reflecting the zombie community’s renaissance as a funky art mecca. 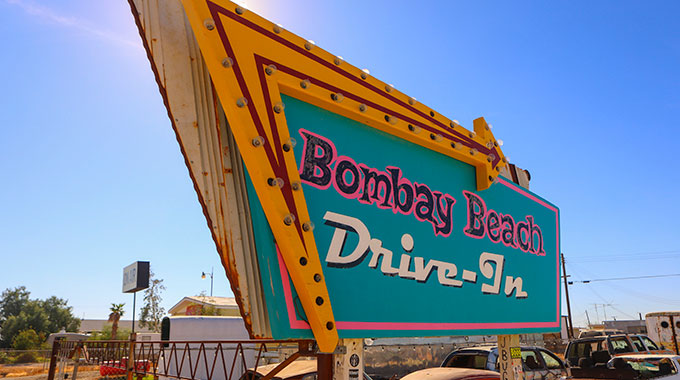 The atomic-age Bombay Beach Drive-In is populated by rusted-out cars.

The displays are thanks to the Bombay Beach Biennale, a 3-day spring arts festival established in 2015 by hotelier Stefan Ashkenazy, filmmaker Tao Ruspoli, and arts patron Lily Johnson White, who invited artists to move in and treat their lots as a canvas for free expression. Many installations were once part of Burning Man or Coachella, such as Randy Polumbo’s Lodestar—a 50-foot-tall sculpture made from an upended World War II–era Lockheed Lodestar fuselage adorned with LED lights and glass flowers. A Beechcraft King Air has morphed into the wacky 40-foot-long flying Da Vinci Fish sculpture. Artist Kenny Scharf has festooned his little art house with a vibrant bricolage of plastic toys. And the Bombay Beach Drive-In is filled with rusted-out cars parked as if waiting for a movie to start.

Salvation Mountain is topped by a cross and adorned with religious messages.

From Bombay Beach, head south to Niland and turn east for Salvation Mountain—a man-made mound of hay bales, old tires, and junk covered with adobe and colored as if by Crayola with various messages on a “God is Love” theme. Rising 50 feet at the entrance to Slab City (an RV and squatter community occupying the abandoned Fort Dunlap World War II Marine training base), this desert oddity is the lifework of Leonard Knight (1931–2014), a religious fanatic who began building the hill in 1984 after his hot air balloon to spread “the word of God” failed to launch. Knight’s undulating and quixotic folk art mound is topped by a giant cross.

The shrine is exuberantly adorned with Bible verses, spiritual messages, and decorative naïve waterfalls, birds, trees, and flowers. You can stroll the painted “yellow-brick road” to the summit. Twenty-eight years in the making, Salvation Mountain has evolved into a sprawling complex that includes “art vehicles” and sculptures, a Navajo-style adobe hogan, and The Museum—a warren of domed rooms resembling a faux forest à la David Hockney meets Lord of the Rings.

The nonprofit Salvation Mountain organization cares for the site, which is open from sunrise to sunset. 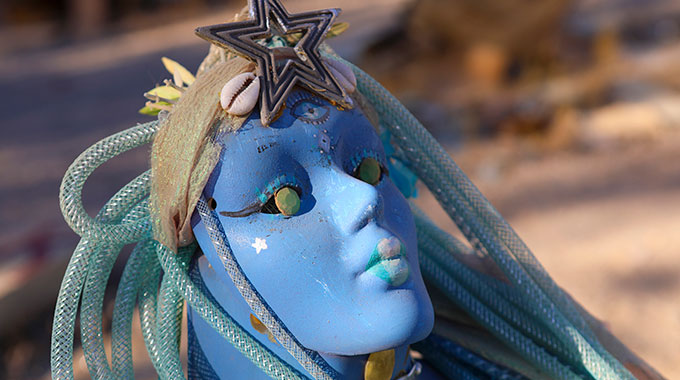 East Jesus offers a visual feast of surreal artworks, such as this marine-like Medusa.

A single 1.3-mile road connects Salvation Mountain to East Jesus Art Garden, an eye-popping journey that leads through Slab City—a not-for-the-fainthearted refuge for counterculture artists, survivalists, wandering misfits, and the dispossessed. The visitor-friendly East Jesus desert art community is of a piece. Its founder, Charlie Russell, arrived in 2007 to work on Salvation Mountain, fell in love with what he called “The Last Free Place,” and settled here. Two art vehicles he built for Burning Man became the nucleus of the sculptural outdoor labyrinth that is East Jesus today. Unlike Salvation Mountain, this site has no religious connotation: The name is a colloquialism for “middle of nowhere.”

East Jesus echoes Slab City’s literal off-the-grid ethos. Each art installation is a radical self-expression made from salvaged and repurposed material, including by itinerant artists-in-residence. Many originated as temporary installations for art festivals and gallery shows by experimental artists such as Mirabelle Jones and Royce Carlson, whose Albino is a giant mutant lizard-whale created from recycled plastic bags. The mixed-media art assemblage also includes Flip Cassidy’s wall of junk TVs titled The Television Will Not Be Revolutionized (with each TV screen displaying a cynical comment) and Joe Holliday’s woolly mammoth made from discarded tires. The Art Garden is open from dawn to dusk. 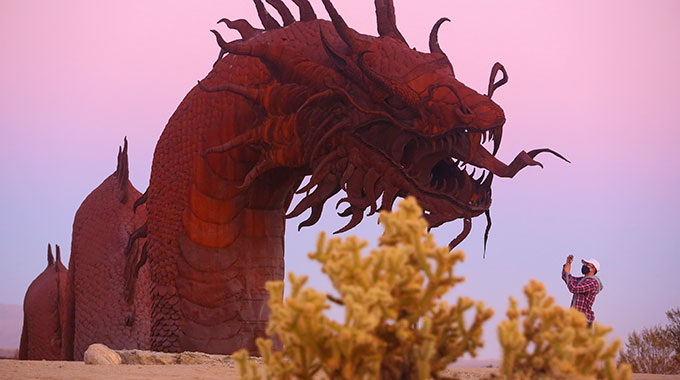 Double takes are normal while driving along Borrego Springs Road, where velociraptors leap from the brush, a T. Rex rears overhead, and a fearsome, 350-foot-long sea serpent appears to slither across the road. Bookending Borrego Springs in the north and in the south, the 130 or so life-size—or larger-than-life—steel-welded installations of Galleta Meadows are the fanciful creations of Mexican-born artist Ricardo Breceda. 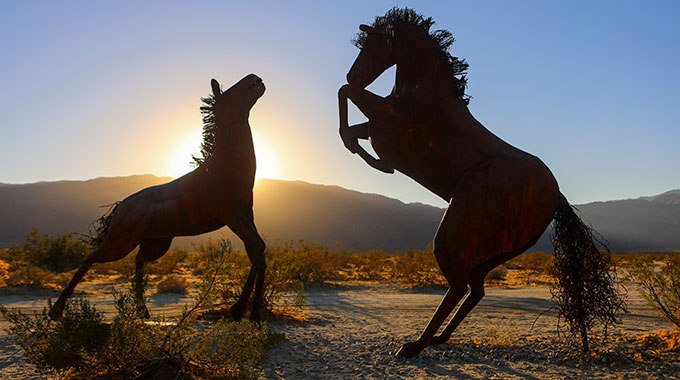 Dennis Avery, the now-deceased owner of Galleta Meadows Estate, commissioned the freestanding “Sky Art” sculptures in 2008. He and Breceda shared a passion for prehistoric beasts that once roamed hereabouts. Thus, rising from the desert flats are mastodons, saber-toothed tigers, and elephant-like gomphotheres, alongside mythical creatures and such creepy whimsies as a giant scorpion poised to strike at a grasshopper. Standing beneath the menacing dinosaurs can cause tingling primeval sensations of unease, especially at dusk, when their claws and teeth are silhouetted in frightful relief. Breceda recently added quirky human figures, such as a gold panner with a mule, and a Spanish padre bearing a cross.

The figures, now cared for by the Under the Sun Foundation, are all accessible by car along dirt roads or sandy tracks. Download a map from the foundation website.

The awry and pleasingly grotesque Joshua trees rising from the hard-packed high desert sand of the Mojave Desert could be mistaken for some of the weird and wacky formations studding the alfresco Noah Purifoy Desert Art Museum of Assemblage Sculpture.

Set amid 10 acres of tameless landscape, this sculpture garden displays the surreal found-object installations of African American artist, designer, activist, and social worker Noah Purifoy (1917–2004). A founding member of Los Angeles’ Watts Towers Art Center, Purifoy gained national recognition with 66 Signs of Neon, made of charred debris from the 1965 Watts riots. In 1989, he moved to Joshua Tree, where over the next 15 years he created more than 100 large-scale “junk art” sculptures.  Made from everyday desert detritus—rubber tires, bicycle wheels, commodes—Purifoy’s radical neo-Dadaist pieces are as haunting as the harsh desert landscape, and as searing as summer’s blast-furnace heat. For example, a segregation-era water station, White/Colored, features a metal drinking fountain sitting adjacent to a toilet bowl under a “Colored” sign.

The museum is open daily from sunup until sundown. Docent-guided tours are offered. Or pick up a brochure for a self-guided tour at the welcome kiosk.