The living roof at the Academy of Sciences at Golden Gate Park in San Francisco.

There shouldn’t be a park here. That’s what Frederick Law Olmsted, the legendary designer behind New York’s Central Park, told San Francisco bigwigs in 1865, when they first approached him about creating an equally grand park in their city. The frontier metropolis, he said, was too windy and sandy to support even a tree.

And yet, here it is. Born 150 years ago, Golden Gate Park is a delightful surprise, 1,017 green acres in the heart of one of the densest cities in the United States. It’s a welcome reprieve from the urban jungle, a place where San Franciscans can toss a Frisbee, row a boat, and joyously decompress.

“The best urban park in America,” says Phil Ginsburg, general manager of the San Francisco Recreation and Parks Department. Ginsburg’s position might make him seem biased, but trust me—he’s right. The park has been my family’s beloved backyard for nearly 20 years. It is beyond compare.

“They planted trees to block the wind,” explains Ginsburg, discovering that “by mixing barley with sand, they could get things to grow.” In two years, the duo planted 22,000 hardy saplings. Today, the park is verdant with redwoods and rhododendrons, conifers and camellias.

On the map, Golden Gate Park is deceptively simple. Two linked rectangles stretch from the middle of the city to the Pacific. But it holds a parade of wonders: 10 lakes, two windmills, and a bison herd.

And for me? Golden Gate Park has sculpted my life. My wife and I chose our house because it lies next to the park, and the park helped us raise three dogs and one son. It has been our jogging path and our family Christmas photo backdrop. (One year, we dressed our then 4-year-old in a jaunty fisherman’s outfit and sat him outside the Angler’s Lodge.) Above all, the park is our congratulations when we’re feeling good, and our solace when we’re feeling bad.

After years of exploring those 1,017 acres, I’ve come to understand that, like all great urban parks, this one channels its city’s soul. Like San Francisco, Golden Gate Park is radiant but sometimes moody, welcoming to everyone—art lovers, bison lovers, and Lindy Hoppers—and rich in ways that no one could have dreamed of back in 1870.

Don’t believe me? Here’s a list of 11 things to do and see at Golden Gate Park. 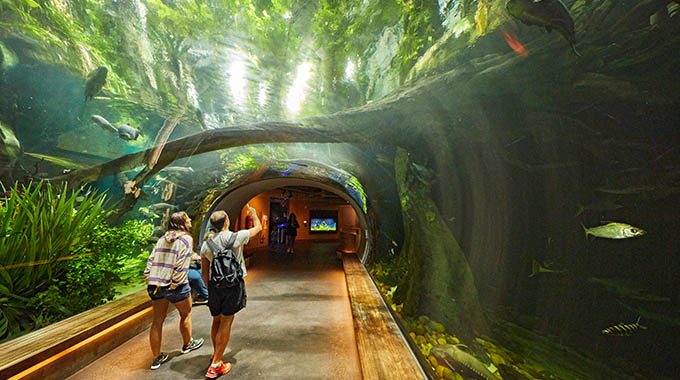 Visitors look up at the four-story rain forest at the California Academy of Sciences. | James Bueti

The living roof at the California Academy of Sciences wows you from the get-go: a vivid green landscape with undulating hills, which—you’ll note on closer inspection—are covered with native plants that draw butterflies, bees, and other local pollinators. In fact, every part of the California Academy of Sciences rewards this kind of focused attention.

While ascending the walkway in the four-story rain forest, for instance, sharp-eyed visitors might see some of the exhibit’s well-camouflaged inhabitants, such as the spiny flower mantis, blue morpho butterflies, and lime-green Amazonian tree boa. Meanwhile, if you gaze intently into the luminous, starfish-filled Philippine coral reef exhibit, you might notice underwater formations shaped like feathers and leaves, cattails and cacti.

But make no mistake: The focus here isn’t just on dazzle. The academy’s Institute for Biodiversity Science and Sustainability also gathers data, sponsoring research expeditions worldwide. To get an in-depth look at the museum and its work—and a peek into the impressive behind-the-scenes collection—pony up for the VIP tour.

Locals and travelers alike gape outside the Bison Paddock. Here, a herd of regal ruminants graze in their own little prairie, sometimes moving majestically toward passersby before slowly sidling off again. John McLaren imported the first pair in 1891, when the species seemed doomed to extinction. Now, with bison thriving nationwide, this small herd serves as a welcome reminder that environmental crises can have happy endings.

3. The Conservatory of Flowers 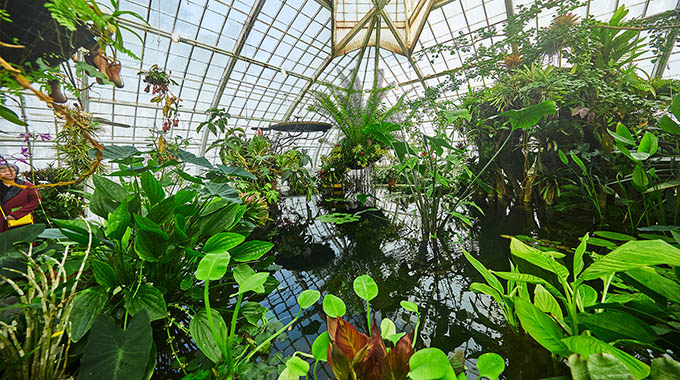 The Conservatory of Flowers houses some 2,000 species of plants.

A stately, ornate tribute to the Victorian passion for growing tropical plants in non-tropical climes, the Conservatory of Flowers, a palatial white greenhouse is the oldest surviving building in Golden Gate Park, and perhaps the most beautiful.

Opened in 1879, the Conservatory of Flowers is one of the last all-wood conservatories left in the United States; its 16,800 panes of glass let sunshine stream in to nurture some 2,000 species of plants, ranging from giant water lilies to delicate polka-dotted orchids, from the cascading tassel ferns to the bright coral, extravagantly named Flame Thrower lipstick plant.

Step outside and you’ll see flower beds planted in rigorously regimented 19th-century fashion but glittering with one bit of 21st-century bling—French artist Jean-Michel Othoniel’s La Rose des Vents, a golden sculpture that gleams as it swivels in the wind.

Jade-green casting ponds sit beside this lodge, home of the Golden Gate Angling and Casting Club. 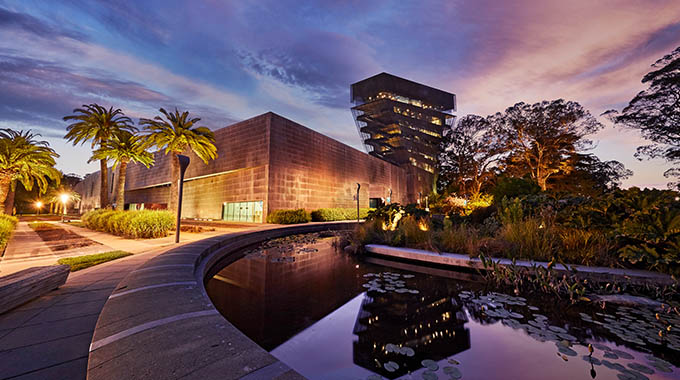 Sprawling and angular, with a looming periscope tower, the de Young Museum looks a little like a spacecraft just in from Planet Art. The 21st-century museum is sheathed in perforated copper that’s a rich brown today but will eventually oxidize, giving the whole building a blue-green patina that echoes the surrounding foliage. It’s an apt metaphor for the evolving institution, which traces its roots to the 1890s.

The de Young is especially strong in American art, counting works such as Albert Bierstadt’s California Spring among its holdings, but Africa and Oceania are well represented too. Short-term exhibits explore everything from contemporary tattoos to African American art during the civil rights era.

Explore the park’s paved trails on wheels. Cycling is especially lovely on Sundays, when some of the main roads are closed to cars. 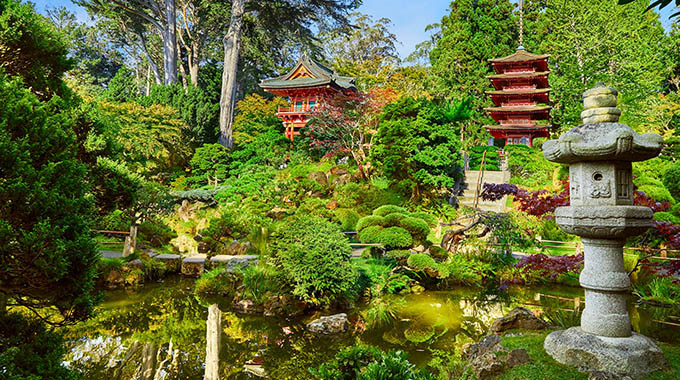 The Japanese Tea Garden, begun in 1894, is one of the oldest in the country.

Walk through the pagoda-style gate of the Japanese Tea Garden and you enter a wonderland where footpaths meander beneath Japanese maples, a high bridge arcs over the koi pond, and, come spring, cherry trees explode in a brilliant shower of blossoms. Sip a cup of sencha in the teahouse and savor the landscape that has beguiled visitors since it opened as part of the 1894 California Midwinter International Exposition.

The garden’s grace is largely the product of one immigrant family, the Hagiwaras: Makoto designed the garden and tended it until his death in 1925; later, his daughter and son-in-law took over. During World War II, the family was forced to abandon their beloved garden when they were sent to an internment camp. Today, a simple but moving monument—created by the late, great San Francisco artist Ruth Asawa—honors the people who provided the city with this profoundly lovely refuge.

It's the oldest public lawn bowling club in the United States, and has impeccably manicured grounds. 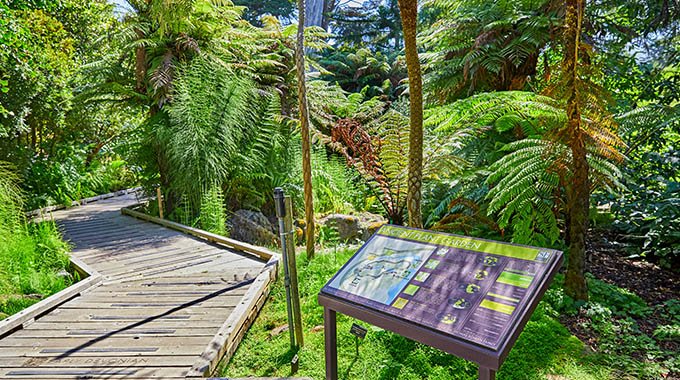 No part of the park proclaims its transformation from sandy wildland to Northern California Eden more eloquently than the San Francisco Botanical Garden, which shelters 9,000 different plants from six continents. The park creators entertained the idea of a botanical garden in the 1870s, but that vision wasn’t realized until 1940.

Today, you could easily spend your whole visit here. Start at the California Native Plant Garden, sweet with sage, then stroll into the grove of coast redwoods nearby. From there, head to the Mesoamerican Cloud Forest, where tree daisies grow 20 to 40 feet high. Continue to areas devoted to the plants of South Africa, Australia, and New Zealand. Looking for a choice picnic spot? The sweeping Great Meadow can’t be beat. 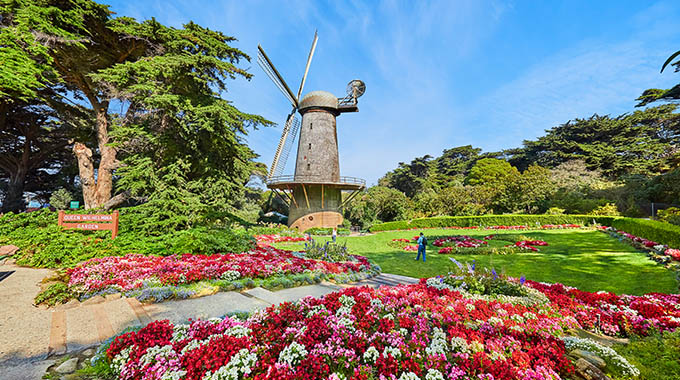 The Dutch Windmill, one of two in Golden Gate Park, once pumped water throughout the park.

When you reach the park’s west end, you might feel like you’ve stepped into a forgotten children’s book. Above you stand two sentries, which in their heyday pumped thousands of gallons of water through the park. The Dutch Windmill dates to 1902; in spring, tulips bloom at its base. Nearby, the Murphy Windmill shines with a 64-ton copper dome, shipped here from the Netherlands. 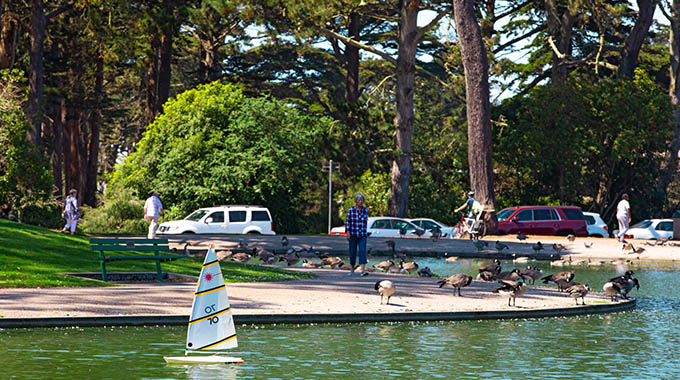 On most weekends, scale-model sailboats and powerboats take to the waters of Spreckels Lake—home of the San Francisco Model Yacht Club—for a series of regattas.Rent a rowboat or pedal boat to navigate Stow Lake, which wraps prettily around the island of Strawberry Hill. Then hit the boathouse for a sandwich and soda.