Experience the nostalgia of outdoor cinema at these throwbacks to another era.

Now that the pandemic has changed how Americans spend their leisure time, one physical-distancing outcome is renewed interest in drive-in movies. With many traditional theaters closed, these outdoor venues allow movie fans to catch a flick on the big screen without having to rub elbows with or squeeze by other patrons.

Drive-ins have waned in popularity since their 1950s and ’60s heyday, when more than 4,000 drive-ins dotted the American landscape. Today, only about 300 remain, many of them family owned or independently operated, according to www.driveinmovie.com.

Frank Huttinger is chairman and CEO of DeAnza Land and Leisure, a drive-in theater company with four locations, including three in Southern California (Mission Tiki Drive-In in Montclair, South Bay Drive-In in San Diego, and Van Buren Drive-In in Riverside). These theaters have multiple screens and can hold between 800 and 1,800 cars, but are currently operating at half capacity due to COVID-19.

Huttinger says his theaters have seen an influx of first-time customers since the onset of the pandemic. In the early weeks, some people—particularly drive-in newbies—had to be turned away because they didn’t know to arrive early or because shows were sold out. He calls the burst in popularity an “anomaly” and a “phenomenon,” but duly notes that his theaters have always enjoyed a stable of regulars. “People tell me: ‘I didn’t know there were any drive-ins left,’” Huttinger says. “But we didn’t go away; they did.”

The movie lineup, however, is not typical for this time of year. Due to shuttered studios and delays in summer blockbuster release dates, drive-ins instead have featured recent releases that were still attracting audiences, such as Knives Out and Onward, nostalgic favorites like Grease, and independent releases that were fast-tracked to digital around the time safer-at-home orders went into effect. At Mission Tiki, The Invisible Man ran for 16 weeks. Suspense, adventure, and horror flicks have been especially popular among newcomers, and some venues are planning Halloween horrorfests to attract younger crowds.

Drive-ins offer double features, cheaper general admission tickets than traditional movie theaters, and often free entry for children under 5. Patrons use their vehicle’s FM radio for audio, and some seasoned customers bring their own portable radios or boom boxes. Families are attracted by the inexpensive concessions and the option to bring their own food. “The babysitting component is definitely there,” Huttinger acknowledges.

So, while drive-ins have added some safety rules during the pandemic—like increasing the distance between cars and selling mostly prepackaged food (freshly popped popcorn is still available) at the snack bar—they still provide a way to enjoy a magical night out at the movies.

Drive-in do’s and don’ts during COVID-19

Arrive early. Show up at least an hour before start time to get a good spot and settle in. Expect a line at the entrance, and bring something for the kids to do while waiting for the movie to begin.

Keep your distance. At the snack bar, stay 6 feet away from other people. Also, most theaters don’t allow guests to set up chairs outside the vehicle, so be prepared to sit inside for the movie’s duration.

Bring a face covering. Wear it when leaving your car to visit the snack stand or restroom.

Time your restroom visits. Restrooms may have limited capacity during COVID-19, so the line may be longer or slower than usual. If you don’t mind missing part of the movie, go while the film is rolling.

Mind your manners. Just like you’d turn off your phone at a traditional movie theater, turn off all of your car’s lights, from the dome lights to the headlights. Don’t leave the engine running, either—if you’re watching a movie at night, you might need to bring blankets or extra layers of clothing. If you have a larger or raised car, choose a spot at the back.

Mind your car. Most drive-ins still use FM radio to deliver sound, but you can preserve your car’s battery by bringing a portable radio or boom box (check ahead to make sure they’re allowed). If your battery dies and you don’t have jumper cables handy, you can call AAA Mobile Battery Service, which can help to jump-start your car or replace your battery.

Check out these half dozen venues around Southern California. Additional theaters can be found at driveinmovies.com. 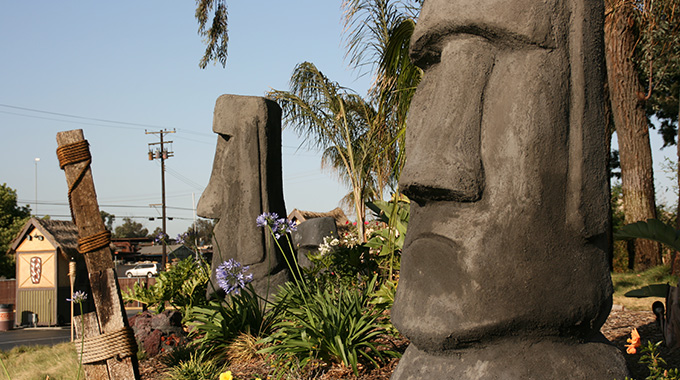 This theater has operated continually since 1956 (although it was refurbished in 2006). Originally named for Mission Boulevard in Montclair, this tiki-themed theater has ticket booths that look like tiki huts and Easter Island–like garden statues. Be sure to arrive at least an hour early at this popular drive-in.

This 1958 venue has been refurbished a few times over the years, most recently in 2013 when it became fully digital. By night, South Bay is a drive-in movie theater; by day (on Wednesday, Saturday, and Sunday), it’s a swap meet.

This theater opened in 1964 on a former orange ranch. A 2007 remodel reflected this theme and includes a mural depicting 1930s Riverside on the original screen tower.

Founded in 1948, the Rubidoux Drive-In once included a petting zoo and a miniature railroad. Those are no longer there, but the theater still pays homage to its original postwar look with an art deco motif on the screen tower.

This drive-in is part of West Wind, the world’s largest drive-in theater chain, with locations in California, Arizona, and Nevada. It shows first-run movies and hosts Tuesday family nights.

Fee: $10 general admission for a double feature. Cash only.

Arrive early because this popular drive-in gets packed on weekends. It can also get chilly, thanks to a breeze coming in from Los Osos Valley, so bring extra layers or a blanket.