Searching for Bigfoot in Northern California

In the verdant, wild landscape of the Klamath Mountains, the legend of Bigfoot is alive and well.

It’s only 59 seconds of 16-millimeter film, but those 954 frames are among history’s most-studied images. In 1967, Roger Patterson and Bob Gimlin, two rodeo cowboys from Washington State, rode packhorses into the Bluff Creek drainage about 50 miles north of Willow Creek, in Northern California. While there, they filmed a shaggy giant as it walked along a sandbar across the creek from where the men were positioned on horseback. Some say the film depicts a person in an ape suit. Others contend that it’s footage of Bigfoot. No question which theory is more intriguing.

I wanted to meet this ambassador from an era when the world was wild and huge hairy humanoid creatures were plentiful. Seemingly every locale has its resident numen, a spirit or a quality that represents the essence of the place—a mystery that hovers over the loveliest landscapes. Or strides through them—on very large feet.

In some places, this mythic creature is called Sasquatch; in the Himalayas, he goes by Yeti or the Abominable Snowman. But Bigfoot? He’s American. Although Bigfoot reportedly has been spotted in 49 states, California boasts the most sightings, and the world’s Bigfoot capital is the town of Willow Creek, near Six Rivers National Forest. Is Bigfoot real? Or the centerpiece of a giant hoax? I wanted to find out, so I packed my bags for Northern California. 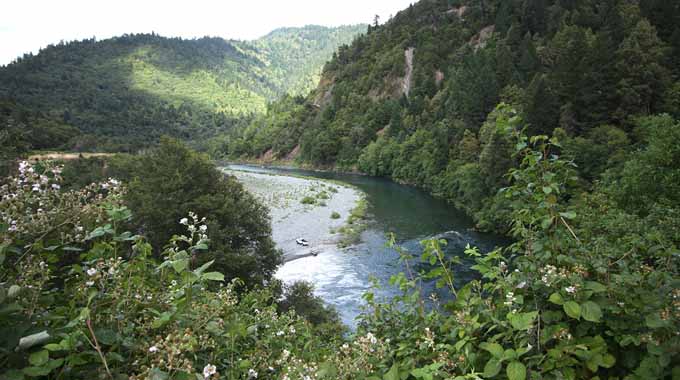 Is Bigfoot a fact or fake?

On the drive from Eureka northeast on State Highway 299, the Trinity Scenic Highway, I ascended into the Klamath Mountains, then dropped into the dense conifers and steepled peaks that surround Willow Creek. On its surface, the town seemed a pleasant little crossroads, with a four-block, tree-lined main drag. But the bucolic atmosphere didn’t fool me. Hints of Bigfoot were everywhere. Bigfoot Motel. Bigfoot Steakhouse. And, at the intersection of State Highways 299 and 96, the swarthy specter of the big guy himself.

It was a “near life-size” redwood sculpture carved by artist Jim McClarin. A sign referring to Bigfoot as Oh Mah—the name used by the local Native people, the Hoopa—explained that the statue is based on eyewitness descriptions, and added this: “Oh Mah reports published over 100 years ago are essentially the same as those being made today.”

In the Willow Creek visitors center, I asked a helpful gal named Rose what she tells people who ask where they can see the real Oh Mah.

“He’ll see you before you see him,” she replied. “But you might smell him. He’s got an odor stronger than a skunk, people tell me.” I asked Rose if there had been recent sightings.

“Oh, yes, lots. My niece saw him in her backyard.”

“No, she didn’t want people to think she’s crazy.”

The nearby Willow Creek China Flat Museum touts its “Bigfoot Exhibit” with a larger-than-life Bigfoot out front (not to be outdone by its wimpy neighbor at the visitors center), a statue carved from charred redwood that depicts the creature as 25 feet tall and extremely hirsute. Inside, the exhibit tells the Bigfoot story through newspaper clippings, movie posters, videos, and plaster casts of his footprints. An 1886 report describes a 7-foot-tall creature seen near the Klamath River, and a timeline indicates that 1850s gold prospectors reported sightings of “hairy giants.” There’s a skull constructed by a Washington State University researcher based on jaw and tooth fossils of a huge apelike creature called gigantopithecus, thought to be extinct for 300,000 years. Some think Bigfoot could be a gigantopithecus holdover.

A large photo in a corner of the room caught my eye. Bigfoot is striding gracefully along a sandbar, short arms swinging, face turned directly toward the camera. There was something unusual about it. Something ... real.

The photo is a still (frame 352, to be precise) from the 1967 footage shot by Patterson and Gimlin. In 2005, the International Center of Hominology put up a $100,000 reward for anyone who could debunk the film. The reward remains unclaimed.

Exhibit signage reads: “This creature, covered with black, shiny hair, appeared to be a female walking upright like a human instead of bent over like an ape. She left prints in the sandbar of Bluff Creek, copies of the casts made by Patterson and Gimlin that day are displayed here.”

Bigfoot is a she?! Why not? Bigfoot in the film clearly has breasts. Besides, there’s obviously no single Bigfoot; sightings have reported males, females, and juveniles. 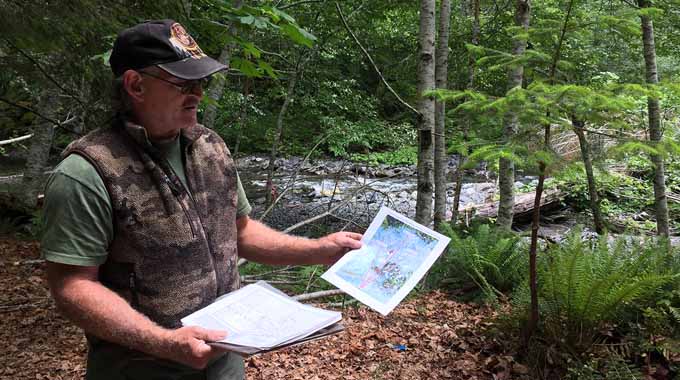 Robert Leiterman, a retired state park ranger, displays maps he and Rowdy Kelley made of the site beside Bluff Creek where Roger Patterson and Bob Gimlin shot footage of a possible Bigfoot in 1967. | Photo by Robert Earle Howells

When I met up with Kelley and Leiterman, we drove north on the Bigfoot Scenic Byway to the confluence of the Trinity and Klamath rivers, where we continued northeast into Six Rivers National Forest. Near the tiny town of Orleans, a turn north put us on a narrow winding road, and we climbed gingerly into Bigfoot’s backyard.

It was easy to understand why Bigfoot frequents these parts: This is magnificent country, with soaring Jeffrey pines, clear-flowing streams, and placid lakes. The understory is alive with dogwood and rhododendron blossoms.

A few more winding roads, a dead-end, a mile’s downhill hike, and we arrived at the hallowed Patterson-Gimlin film site—an area just above a fast-flowing and crystal-clear stretch of Bluff Creek, shaded by maples and Douglas firs.

Why was it so important to establish the exact location of the filming? “For one,” said Leiterman, the former park ranger, “if you can’t prove the location, it’s hard to accept the film as legitimate. It also helps us estimate the size of the animal.” That is, knowing the size of trees and landmarks helped researchers gauge Patty’s stature. Most researchers say she’s a dainty 6-footer.

“It’s the Garden of Eden down here,” said Leiterman. “The sword ferns, the greenery. It’s always cool, even when it’s 110 up above.” The hard work the men had done in authenticating the site was long over—the laying out of 30-foot grids, each tree and stump carefully compared against the film and a high-perspective photo. They’d already proven that this was the site, but they whipped out their “treasure map” and delighted in pointing out key landmarks—stumps called Smiley Face and Big Stump, trees called Bent Maple and Laurel and Hardy—all the while showing me how map, film, and location matched up.

The men had placed several motion-sensitive cameras around the site, and they needed to check footage and batteries. All manner of creatures showed up on the footage we reviewed: black bears, mountain lions, foxes, and, to everyone’s delight, rare Humboldt martens—cute as can be and a highly threatened species. But no Bigfoot.

After our map tour and camera checks, we picnicked beside the creek, close to the spot where Bigfoot Patty stood in frame 352 and stared for a moment directly at Patterson’s camera. Leiterman and Kelley have never seen Bigfoot in person, nor through their trail cameras. They remain open to Bigfoot’s existence, however, and indifferent to any scorn for their obsession. “We have thick skin,” said Leiterman.

As we snacked, Leiterman gestured across the log-strewn forest floor and alluded to an overlooked aspect of the Patterson-Gimlin film debate. “Watch Patty walk in that film,” he said. “She never looks down. Imagine a guy in a suit doing that here. Imagine anyone doing it. You’d have to look down.”

That’s hardly proof of Bigfoot’s existence. But what would be? And does it matter? To me, it’s like debating whether wonder and mystery and dreams exist. If we limit our attention only to what can be touched, quantified, and proven, we’ve lost a bit of the magic that makes life—and our travels—so endlessly fascinating.

As we started our hike back up from Bluff Creek, we noticed a scurrying of varied thrushes rising from the forest understory back down where we’d spent the afternoon. Something had stirred them up. A presence in the forest. Unheard. Unseen.

GETTING THERE: United Airlines has nonstop flights from LAX to Arcata/Eureka. Willow Creek is about 44 miles east of Arcata via State Highway 299.

The Patterson-Gimlin film site is about 25 miles from the nearest town, Orleans, via rough and narrow roads. Directions are on the Bluff Creek Project website, bluffcreekproject.blogspot.com. Its advice: Travel in groups in high-clearance vehicles.

WHERE TO STAY: China Creek Cottages offers furnished cabins in the woods near Willow Creek. Rates start at about $89. 530-629-3355; chinacreekcottages.com.

Tish Tang Campground is about 9 miles north of Willow Creek on the Trinity River. 707-672-6018; hoopaforestry.com/campground.html.

Klamath River Lodge, in the Bluff Creek area, features cabins at the Klamath River, about 4 miles south of Orleans. Rates start at about $140. 707-834-8935; klamathriverlodge.com.

Aikens Creek West and E-Ne-Nuck campgrounds have 10 sites each and are located 9 miles south of Orleans. 877-444-6777; tinyurl.com/sixriverscamping.

MORE INFO: The Eureka-Humboldt Visitors Bureau has a wealth of information. 707-443-5097; visitredwoods.com/bigfoot.

FUN FACTS: Bigfoot footprints average 15.6 inches long. He (or she) has five toes. His shoe size would be about a 22. Adult bigfoots are generally 7 feet, 3 inches tall, and weigh about 650 pounds.