The coastal California villages of Half Moon Bay, Cambria, and Avila Beach offer breathtaking views and other seaside charms.

Half Moon Bay: Get back in touch with nature 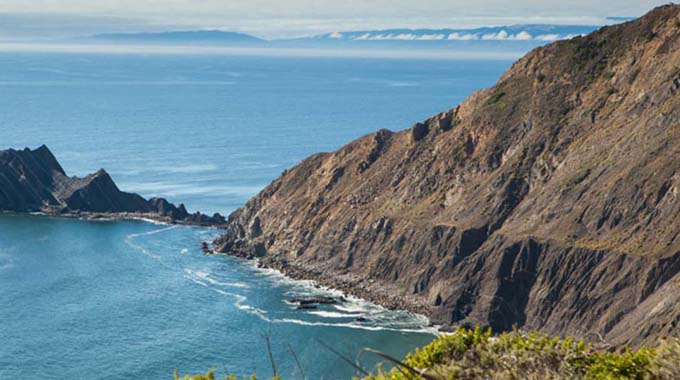 Hikers on the Devil's Slide Trail near Half Moon Bay can enjoy astonishing views like this one. | Photo by Chuck Place

Many people know Half Moon Bay for Mavericks, the famous big-wave surfing break just north of town, or for the charmingly odd downtown area anchored by Main Street, where a chicken coop and feed shop share a block with an upscale Italian restaurant and a fancy apothecary. It also boasts unimpeded ocean views while driving Pacific Coast Highway; the James V. Fitzgerald Marine Reserve, a nature preserve just north of the bay with forested bluffs and some of the state’s best tide pools; and a beachside walking trail perfect for long weekend runs. —Robin Jones

Hike the Devil’s Slide Trail, a twisting two-lane road carved into the side of Montara Mountain with panoramic views of the Pacific Ocean. It’s part of the California Coastal Trail, a partially finished 1,200-mile network envisioned to extend from Oregon to Mexico. It’s about 7 miles north of Half Moon Bay. Parking can be scarce; hikers are encouraged to take SamTrans (samtrans.com), which has a stop in front of the trailhead. Dogs on leashes are welcome.

In Half Moon Bay, the pizza oven at It’s Italia turns out delicious pies with unusual topping combinations, such as pears and Parma prosciutto; or artichoke hearts, shiitake mushrooms, and Italian sausage. 650-726-4444.

At the AAA Four Diamond The Ritz-Carlton, Half Moon Bay, perched on towering bluffs just south of downtown, guests can enjoy fire pits on the oceanfront patio and wine, beer, and cocktails in the cozy bar before retiring to spacious, well-appointed rooms. Rates start at $869. 650-712-7000; ritzcarlton.com/hmb. 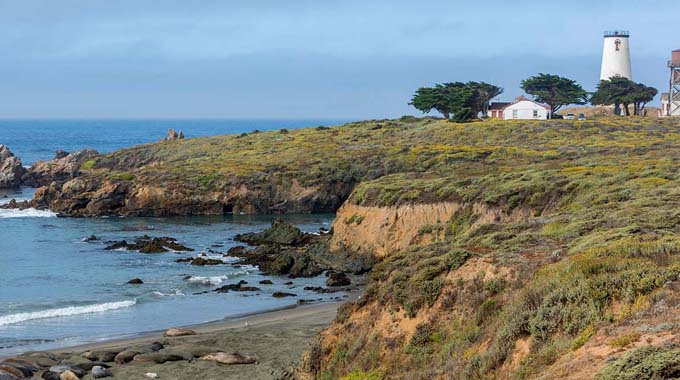 The historic Piedras Blancas Light Station, which is 16 miles north of Cambria, offers tours. | Courtesy of the Bureau of Land Management

Cambria makes an ideal base for exploring such Central Coast sites as Hearst Castle and the Piedras Blancas Light Station. But don’t overlook the area’s beautiful stretch of coast, with narrow beaches made for strolling hand-in-hand with your honey. —Howard Cole

Galleries, specialty gift stores, and independent ice cream shops abound. If you are an avid knitter, check out the yarn store Ball and Skein and More. 805-927-3280.

Support local artists at Ephraim Pottery West Gallery, housed in a Victorian building on Main Street. Glazed artworks include bowls, tiles, and vases, many with nature-inspired motifs, such as a jackrabbit that looks as if it’s going to pounce from a vase straight into your living room. 805-924-1275.

Visit Piedras Blancas Light Station, built by the United States Army Corps of Engineers and first illuminated in 1875. You aren’t allowed to climb the circular stairway to the top, “for safety reasons,” noted Ryan Cooper of the Bureau of Land Management, which runs the facility for the U.S. Department of the Interior. Adult admission, $10. 805-927-7361.

Tour Covell Ranch, about a mile inland and up the hill from Main Street, in a four-wheel-drive. Or go horseback riding. Two-hour tours and trail rides start at $100 per person. 805-975-7332.

Set in a red brick building, Linn’s of Cambria is hopping at breakfast and lunch. Try the omelets, such as the Moonstone Beach with shrimp and Dungeness crab or the Central Coast Veggie. Olallieberry jam, which I enjoyed on my toast, is a favorite. Chicken pot pie is another. Breakfast, from $8. 805-927-0371. 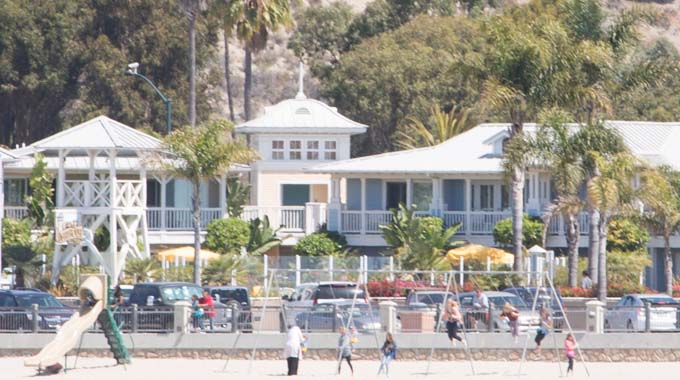 Avila Lighthouse Suites (in the background) is located on Front Street, which runs along Avila Beach's oceanfront. | Stephanie Hagar

Hearing the ocean’s cadence is just one of the daily pleasures of life in this picture-perfect hamlet of Avila Beach ensconced in Central Coast wine country. You can also walk along the beachfront promenade, browse boutiques, and nosh at eateries set in colorful clapboard buildings buzzing with patrons. —Rachel B. Levin

Peloton Cellars is one of several wineries with tasting rooms in town, meaning you can sample local wines without leaving the beachfront. 805-627-1080.

Nature lovers can rent bikes for a spin on the scenic Bob Jones City-to-Sea Trail, which follows San Luis Obispo Creek to the ocean. visitavilabeach.com.

Dine on fresh-caught seafood at the Olde Port Inn at the end of Harford Pier—you can peer down into the water from your glass-top table. 805-595-2515.

Some rooms at the nautical-themed Avila Lighthouse Suites have ocean views; all have either a balcony or a patio. Rates start at $169. 805-627-1900; avilalighthousesuites.com.

Experience the mineral waters at the Sycamore Mineral Springs Resort and Spa, where all rooms include private patio hot tubs. Rates start at $149. 805-595-7302; sycamoresprings.com.

Pick up your free California Coast and Valley map and free TourBook guides and get TripTik Travel Planners at your local AAA branch or online.