Growing up, I loved going to the movies. In those magical movie palaces, my imagination would take flight as I ventured to glamorous faraway places and time-traveled through different eras. So when I moved to Los Angeles, the undisputed epicenter of America’s film industry, some 20 years ago, I looked for a museum of cinema history. I found a couple of small museums with seemingly random collections, but none that systematically gathered and presented material to tell the multifacted and fascinating story of this major art form.

My search ends this year with the opening of the Academy Museum of Motion Pictures on September 30. The museum couldn’t be more anticipated. “The founders of the academy envisioned a movie museum in Los Angeles more than 90 years ago, and now it’s finally happening,” museum director Bill Kramer said at a press conference last year, before COVID hit and delayed the opening. “We’re building a museum that will fully reflect the wide variety of stories connected to cinema and motion pictures—stories from many points of view.” 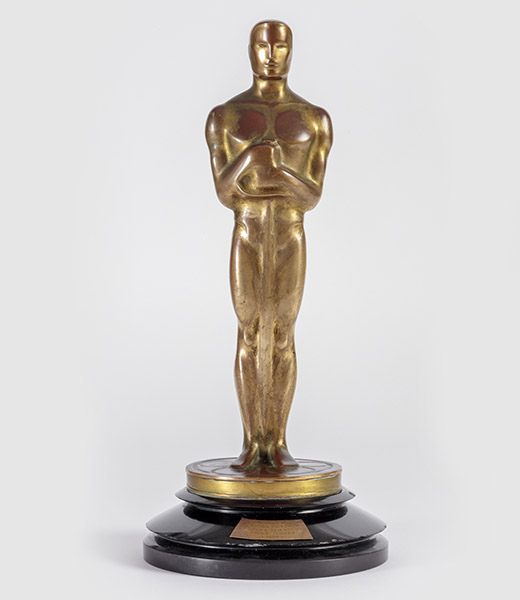 A project of the Academy of Motion Picture Arts and Sciences, the organization that hands out the Oscars each year, the museum debuts amid historic change in the film industry. For starters, COVID has forced countless theaters to close their doors over the past 18 months. Meanwhile, streaming services have exploded, prompting more people to watch first-run movies at home.

In addition, the film industry is reckoning with a lack of diversity among academy members and award recipients. In response, the academy has recently expanded its ranks to become more racially and ethnically diverse. Museum directors are working to address related issues by introducing programming that serves the museum’s mission to be inclusive. 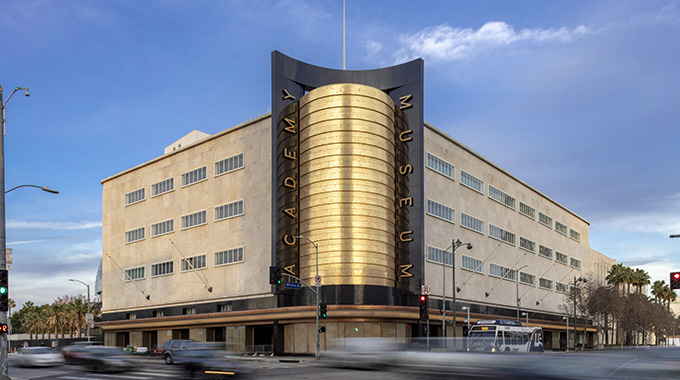 The main complex, the Saban Building, was once a May Company department store. | Photo by Josh White; JWPictures/AcademyMuseum Foundation

Located at Wilshire Boulevard and Fairfax Avenue, the museum is made up of two connected buildings. The main complex, the Saban Building, is a 1939 Streamline Moderne classic that was once a May Company department store. The original facade, with its gold-tiled cylindrical corner, was saved, but the interior floors have been completely renovated.

Two pedestrian bridges link the main building to a futuristic, glass-paneled sphere designed by Pritzker Prize–winning architect Renzo Piano. The sphere building has a terrace with a panoramic view of the Hollywood Hills, and a 1,000-seat theater that will be used for screenings, talks, and performances. Altogether, the two buildings encompass 300,000 square feet, with more than 50,000 square feet of exhibition space. 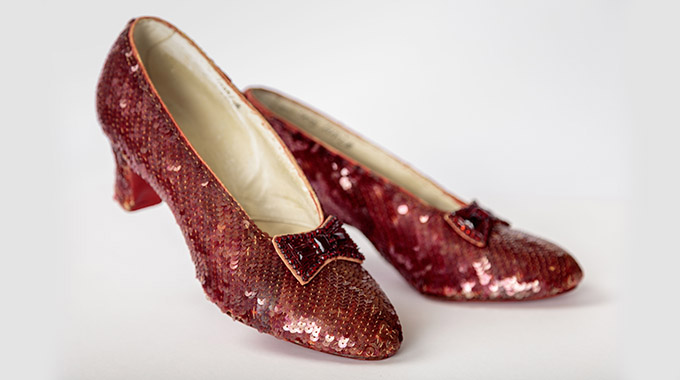 On display is one of the original pairs of ruby slippers from “The Wizard of Oz” (1939). | Photo by Josh White; JWPictures/Academy Museum Foundation

I recently toured the complex with exhibition curators Jenny He and Jessica Niebel. We started with the public spaces on the ground floor of the Saban Building, which includes a museum store, a restaurant and café, and an introduction to the museum’s core exhibit, “Stories of Cinema.” Six suspended double-sided panels show film stills and clips from the earliest days of moving pictures (the work of the Lumière brothers in 1895) to present day. 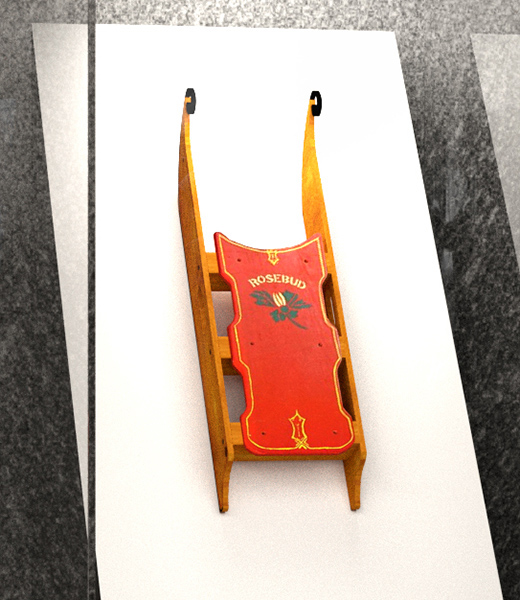 One of three Rosebud sleds made for Orson Welles’ 1941 film, “Citizen Kane.” | Photo courtesy Academy Museum Foundation/Image by WHY Architecture

“Stories of Cinema” continues on the second and third floors with displays that highlight specific aspects of noted films. The section on Orson Welles’ masterpiece, Citizen Kane (1941), for example, features the Rosebud sled and the lenses owned and used by cinematographer Gregg Toland. Toland is celebrated for his innovative approaches, particularly the use of deep focus to show the foreground and background in equal sharpness.

Another vignette spotlights editor Thelma Schoonmaker, who worked on many of Martin Scorsese’s films, including Raging Bull (1980), for which she won the Academy Award for best editing. Also displayed here is an editing flatbed—a hefty table topped with plates used back when editing was done by hand on a machine. 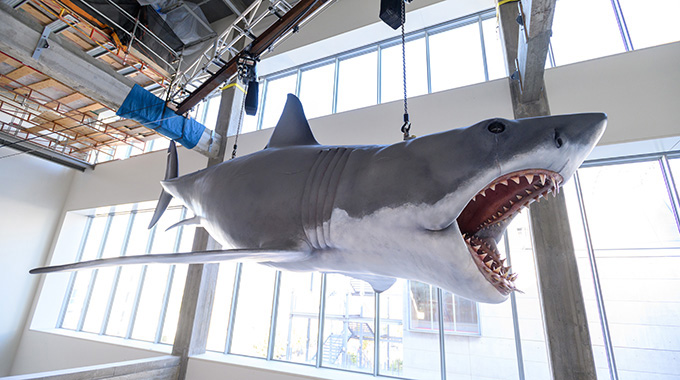 My personal connection to Hollywood’s Golden Age drew me to one particular display. The English name my mother gave me is from Gone With the Wind (1939), which she managed to see during her childhood in China (although she didn’t know Scarlett O’Hara was spelled with not one, but two t’s). For many women of that era, Scarlett was a symbol of female resourcefulness and tenacity. Today, the movie is widely recognized as problematic for its romanticization of the Old South and its tacit approval of slavery.

The display on Hattie McDaniel, who played Mammy in the film, addresses how the “Golden Age” treated Black actors as second-class citizens. The actress wasn’t allowed to attend the film’s premiere in Atlanta because it was in a whites-only theater. At the Academy Awards ceremony in L.A., held at the Cocoanut Grove nightclub, she had to sit off to the side at a segregated table. Nevertheless, she did win the award for best supporting actress, besting costar Olivia de Havilland and becoming the first Black actor to win an Oscar. 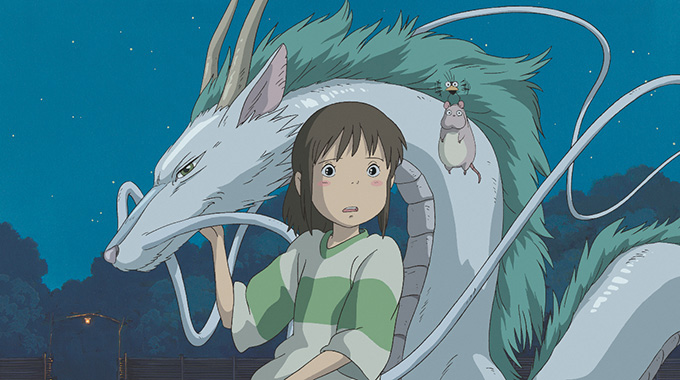 A film still from “Spirited Away.” | Courtesy Hayao Miyazaki/Studio Ghibli

The museum’s fourth floor will host rotating exhibits, and first up is an exhibition on Japanese animator Hayao Miyazaki. On display are original drawings, production cels, posters, and objects on loan from his Studio Ghibli, which has produced such children’s classics as Kiki’s Delivery Service (1989), Princess Mononoke (1997), and Spirited Away (2001).

Miyazaki is noted for his richly imagined worlds and compelling stories, many of them featuring girls in leading roles. As I walked through a tunnel with friendly little spirits lining the wall, I felt as though I were entering an enchanted forest. “The idea is to evoke the sense of curiosity and the spirit of adventure of children,” said curator Niebel. “To leave the real world behind and dive into this different world.”

I did just that. As I walked through the exhibit, I was reminded that Chihiro, the lead character in Spirited Away, is one of my favorite film heroines. The spunky girl is forced by the spirits to work in a bathhouse in order to save her parents, who had been turned into pigs.

I was also reminded that great movies like this one, at their core, tell stories that we all can identify with. The Academy Museum will now be the place where we can rediscover that over and over again.

General admission, $25. Tickets are available only through online reservations at academymuseum.org or via the museum’s app. Visitors can access the museum’s public spaces without a ticket.

Scarlet Cheng writes regularly about culture, film, and art for such publications as the Los Angeles Times and The Art Newspaper.