HONORABLE MENTION: “Merced Sentinel Reflection” by Dennis Kneff, a 72-year member from Simi Valley, California. Camera: Nikon D850. “During a four-day February visit to Yosemite Valley, I stayed at the Yosemite Valley Lodge. I spent a dull, cloudy day hiking and biking in search of interesting photography subjects. My reward came when the sky opened up to the west and the setting sun lit up the clouds. I took this photo from a trail along the Merced River, near the lodge.”

Things got weird shortly after the seventh Westways Photo Contest opened for business in late February. The novel coronavirus didn’t affect our entries too much: Most of the eligibility period dated to the time before heightened travel restrictions. While the future remains uncertain, we are confident that photography will continue to be an essential part of travel. Capturing fleeting moments in time allows us to savor and share precious vacation memories—pandemic or no pandemic. This year’s field of winners ranges from irresistibly cute close-ups to pulled-back panoramas. We thank everyone who entered and congratulate those whose work appears below. 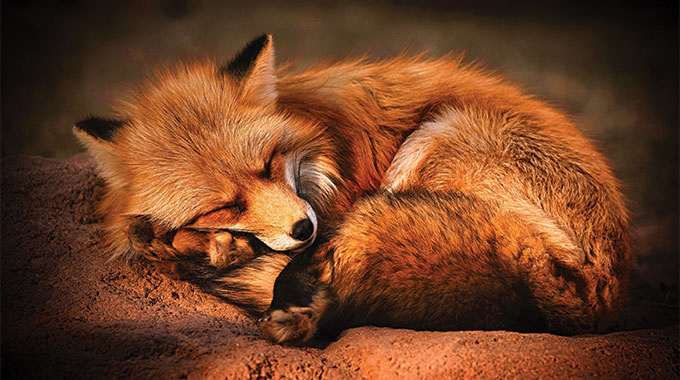 “Prior to the pandemic, my wife and I did a grand tour of northern Arizona, putting more than 2,000 miles on our car. Our Flagstaff hotel was a good jumping-off point for many sightseeing locations, including Red Rock and Slide Rock state parks, both near Sedona; Sunset Crater Volcano, Wupatki, Walnut Canyon, Montezuma Castle, and Tuzigoot national monuments; and the Grand Canyon and Petrified Forest national parks.

While hiking near Williams [about 40 miles west of Flagstaff], we stumbled upon this fox that had no fear of being photographed. We were hurrying because it was approaching sunset, and my wife almost didn’t want to stop. So it was fortuitous that I made time for this photo.”

“My wife and I are photography enthusiasts, so we plan our vacations with that in mind. Eastern Washington’s unique topography makes it popular with photographers, especially when the fields are green in late spring and early summer. Known as the Palouse, this area primarily grows grains such as wheat and barley. Several photo tours visit the region, but we traveled independently to ensure that we could photograph everything on our list.

We stayed in Colfax, which is centrally located, and explored other agricultural communities in Pullman, Steptoe, and St. John.

I shot the PNW Steptoe Seed Plant (a.k.a. the Whitman County Growers grain elevator) from the 3,612-foot Steptoe Butte, which is located in Steptoe Butte State Park about 12 miles away.”

“During our annual trip to the Sonny Bono Salton Sea National Wildlife Refuge in late January, my wife and I spent the better part of the day searching for burrowing owls, with no success. As we exited along a deserted dirt road, we came across this family of owls hiding in a hole behind an irrigation canal, all facing the same direction and enjoying the last vestiges of sunlight.

To capture a good picture, we drove about a mile down the road and crossed a small bridge. I readied my gear before slowly approaching and positioning myself about 200 feet from them. Using the truck door to support my camera, I photographed for about a half hour with a 200–400mm lens.”

“On the way home from a road trip in Oregon, I passed through Humboldt Lagoons State Park and witnessed the sun illuminating the marsh as it began to set behind the trees. I immediately pulled off the road and composed my shot. It turned out to be one of my favorite images taken during this trip. I look for opportunities to shoot into the sun because of the way it backlights a scene.” 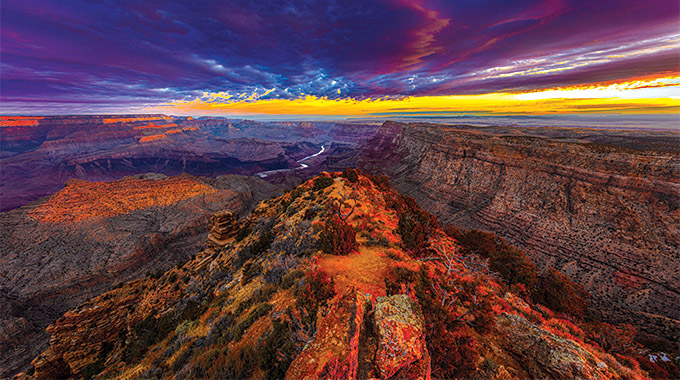 “My son Chase and I decided it would be cool to do a road trip through Grand Canyon National Park. On the last day, we went to the easternmost location. We arrived at 3 a.m. and shot the night sky until the light from dawn appeared. As the sun rose, the landscape went from a monochromatic black and gray to this amazing array of the richest colors I’ve ever seen in one landscape—purple, blue, red, orange, yellow. It was an incredible thing to experience. So glad I was there to capture it for all time.” 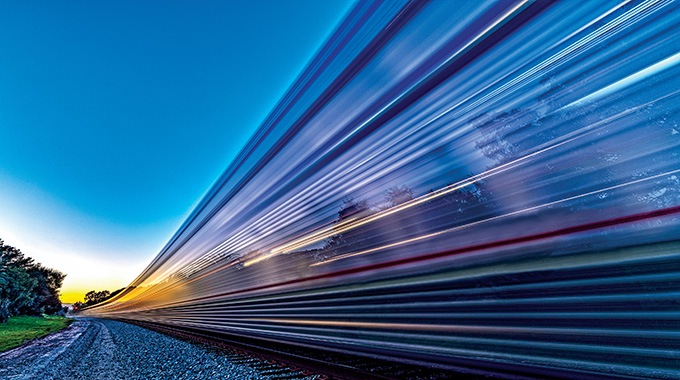 “About 4 miles northwest of the Santa Barbara train station, the Pacific Surfliner speeds north out of the city into the sunset. I used a long exposure (10 seconds at f/11) to give this shot a ghost-like appearance and to convey the sense of speed. This type of photo requires lots of practice and careful planning since timing and exposure are crucial—you get only one shot.” 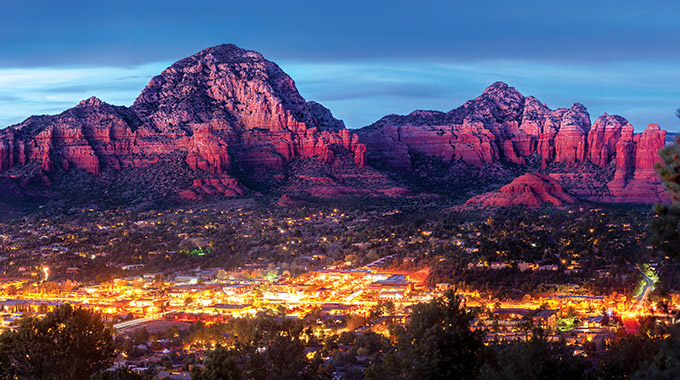 “I had driven up Airport Road in Sedona, Arizona, to the overlook in an effort to catch what was looking to be a fine sunset. As I made my way through the crowd, it quickly became clear to me that the sun was setting too far to the left of my vantage point to get a meaningful photograph. Fortunately, just after sunset, Sedona’s lights provided the perfect long-exposure shot of the city. It was a spectacular spot from which to view the stunning red rock background and the bustling town below.” 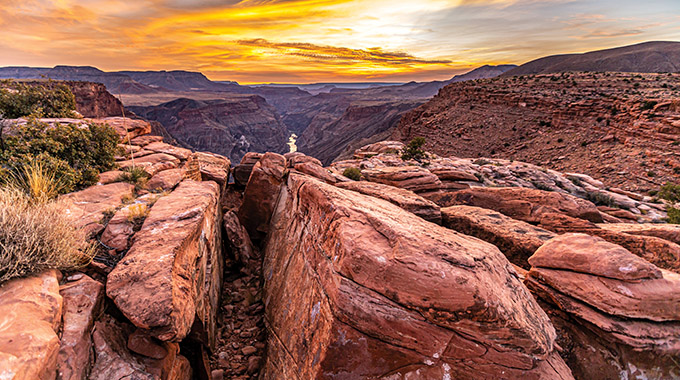 “This shot occurred during a group camping trip to the North Rim of the Grand Canyon. We were extremely lucky to have excellent weather, with clouds that became golden at sunset. My friends and I had tried to get to this place six years ago, but our car broke down 1 mile from the entrance and we never made it. It has been on my bucket list ever since. Someone said early miners found no gold in the Grand Canyon, but we found a sky of gold!”

“Growing up landlocked in Dallas, I’ve always been mesmerized by Hawai‘i. I have been visiting regularly for the past 20 years. If I don’t go for more than two years at a stretch, I begin to get very restless. While not an exact count, I’d say I’ve spent a total of two years there over the course of around 15 trips. It’s never enough. The island chain’s epic and primordial mountains, colors, and aromas are simultaneously energizing and silencing. The ever-changing weather offers hundreds of daily opportunities to see the place over and over, as if for the very first time.”

“I took this photo on a trip to the Salton Sea. At Wonderstone Wash [a bit south of Desert Shores on the sea’s west side], the water was so still and the contrast of the bird against the distant mountains was so peaceful. I tried to capture birds passing in the distance. I love the cool tone and softness of the scene.”

“I rode my motorcycle 260 miles to Babes Ride Out, a women’s motorcycle event in Santa Margarita [in San Luis Obispo County]. I went up a day early to see the Bruce Munro: Field of Light at Sensorio installation in Paso Robles. The experience of witnessing 58,000 solar-powered lights glowing, changing colors, and swaying in the breeze as the sun set was magical and one of the prettiest things I have ever seen.” 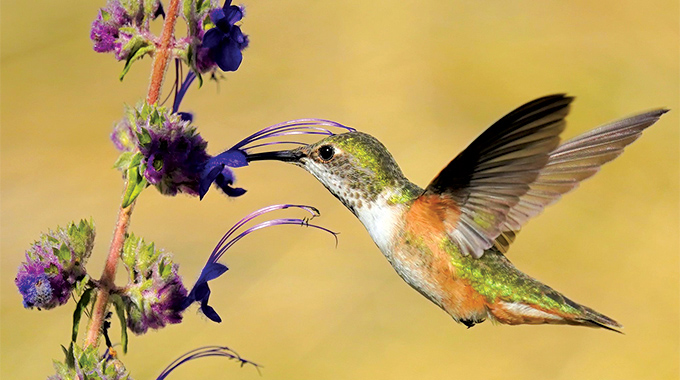 “Thompson Creek Trail in Claremont is one of many hidden gems in California. This area is particularly beautiful when the lavender and other flowering plants are in bloom. Although the flora and nearby hiking trails are worth the visit, it is the wildlife, especially the hummingbirds, that keep me coming back. For me, this picture symbolizes the coexistence of all life as the flower caresses the hummingbird: an embrace between a bearer of nourishment and its pollinator.”

A Bee’s Life by Chris Burt

“My family, including my wife, Lisa, and daughter Madison, vacations in San Clemente every summer. The beauty of the sunflowers that grow every year across from the San Clemente Art Association always amazes me. I shot this photo during one of my early-morning walks. Nature and flowers always get my attention because they always present themselves in their true form; you just have to be ready to capture it.” 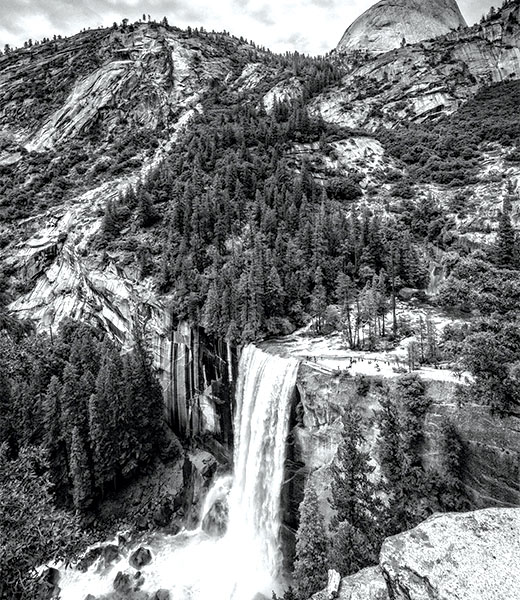 “When I was growing up, I always went to Yosemite National Park with my family. We camped, cooked our own food, and hiked. We stopped going once I turned 10, and that saddened me. But then my girlfriend and I went there in June 2019, the year with endless water. It was pure magic!”

See the photos that almost won.

First prize is round-trip coach air travel for two to O‘ahu on Alaska Airlines; four nights’ stay for two in a deluxe ocean-view room at Hilton Waikiki Beach; a Turtle Bay Magnum Experience tour for two from Paradise Helicopters; a private Island Photo Tour for two from Blue Hawaii Photo Tours; two tickets for the winner’s choice of a Hawaii Forest and Trail tour; an electric bike experience for two from Pedego Kailua; a five-day car rental on O‘ahu from Hertz; a courtesy week pass from The Parking Spot; dinner for two at Merriman’s Honolulu; a $100 Best Western Travel Card®; and a $50 gas card from Aloha Petroleum.

Second prize is round-trip coach air travel for two to Seattle on Alaska Airlines; three nights for two at The Edgewater Hotel with a breakfast and a dinner for two at Six Seven Restaurant; a custom guided Seattle electric bike tour for two from Pedego Seattle; two passes to the Seattle Art Museum and Asian Art Museum with lunch at Taste; a one-week airport parking pass; and a hotel gift card.

Third prize is three nights for two at the Hideaway Santa Barbara; two tickets for a Lobero LIVE concert at the Lobero Theatre; two tickets for an Ensemble Theatre Company performance; dinner for two at Jane; a two-hour Coastal or Sunset Cruise for two aboard the Double Dolphin; a wine and charcuterie tasting for two from Sanford Winery and Vineyards; lunch or dinner for two at Lucky Penny; two passes to the Santa Barbara Museum of Art; a one-week airport parking pass; and a hotel gift card.

Fifth prize is two nights for two at the Kona Kai Resort and Spa in San Diego with one dinner for two at Vessel; a custom guided La Jolla electric bike tour for two from Pedego La Jolla; zoo admission and Inside Look tour for two at the San Diego Zoo; a $100 VIP badge and walking tour of Liberty Public Market; a one-year individual membership at the Museum of Photographic Arts in San Diego; a one-week airport parking pass; and a hotel gift card.

Honorable-mention winners each receive a one-year Automobile Club of Southern California membership with Classic benefits; a $50 Hyatt gift card; a one-year individual membership at the Museum of Photographic Arts in San Diego; and an Ultimate Movie Pack from Regal. Honorable mentions are presented in no particular order.