10 cool things to do in and around Phoenix

Even before spring officially arrives, Phoenix and its surrounding communities come to life. Clear skies and 70-degree temperatures melt the snow atop the Superstition Mountains a little each day. Brittlebush and lupine bring bright strokes of yellow and purple to cactus-studded landscapes. And hope springs eternal for the players and fans of the 15 Major League Baseball (MLB) teams that converge upon the Valley of the Sun for spring training from mid-February through March. Whether you want to catch the action at the ballfields or just need a fun, sunny escape, here are 10 top things to do and see on a late-winter or early-spring visit to the Phoenix area.

1. Explore the terrain at the Desert Botanical Garden 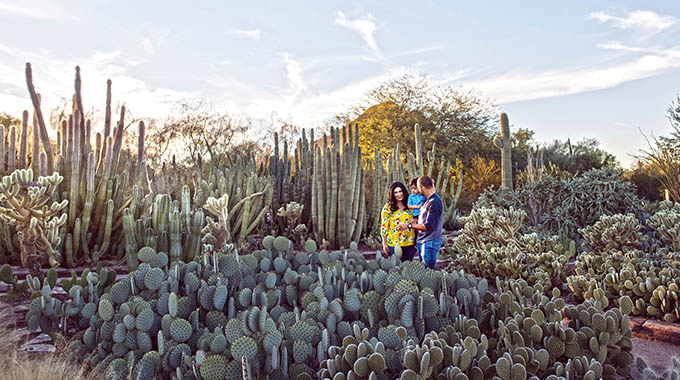 About 9 miles east of downtown, the Desert Botanical Garden in Papago Park reveals a fascinating array of desert plants, from towering saguaros and cardons to organ pipe cacti and chollas. These and many others are grouped thematically along short, gentle walking paths, perfect for leisurely spring strolls beneath the park’s buttes. Admission: Adults, $24.95; children 3–17, $12.95; children under 3, free. 480-941-1225.

2. Discover the past at the Heard Museum 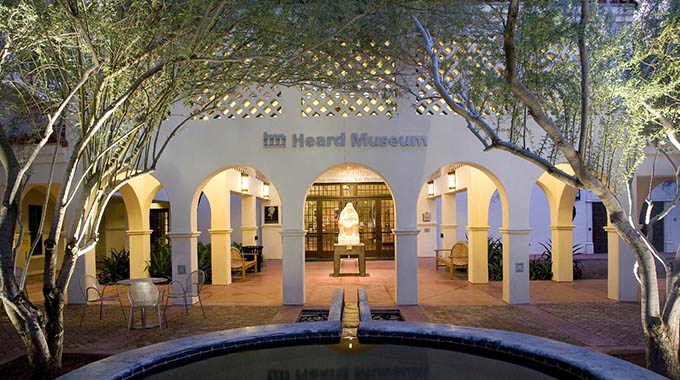 The Heard Museum is renowned all over the world for its collection of American Indian art. | Photo courtesy Heard Museum

For an excellent introduction to the area’s human past, head to the Heard Museum in downtown Phoenix. You’ll discover the history and culture of the region’s indigenous peoples, as well as see how today’s Native American artists and artisans are interpreting ancestral traditions in contemporary works. These include Indigenous Evolution, a clay and glass “art fence” created in 2004 by Tony Jojola (Isleta) and Rosemary Loneworld (Santa Clara Tewa), which greets visitors near the entrance to one of the museum’s signature exhibits. The work, which includes a row of slightly askew poles in bright shades of turquoise, sandstone, and sunflower, replicates the types of fences the area’s Native peoples made from organic materials such as saguaro cacti, ocotillo, or adobe. Admission: general, $18; 65 and older, $15; children 6-17, $7.50; free for children 5 years and younger, American Indians, and on the first Fridays of most months (excluding March) from 6 to 10 p.m. 602-252-8840. 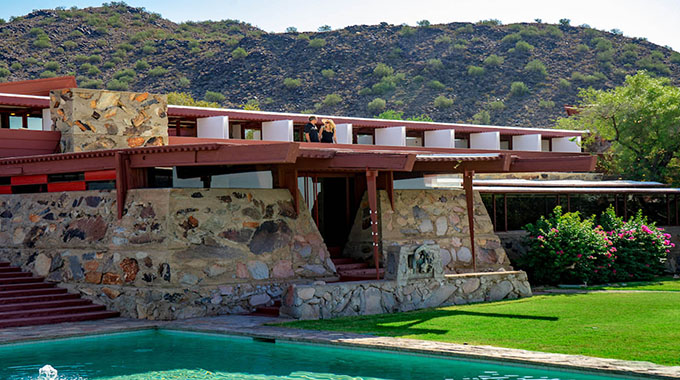 Frank Lloyd Wright was in his 60s and had already revolutionized American architecture when he established Taliesin West, the winter home of his architectural school, in the Scottsdale foothills in 1937. The grounds became his architectural laboratory, with his apprentices building structures and landscapes he designed. Today, these spaces stand as a testament to some of his most profound architectural principles, which you can explore on guided tours, which range from $25 to $70.

Wright’s connection to Central Arizona dates to the late 1920s, when he consulted on the AAA Four Diamond Arizona Biltmore hotel, designed by one of his students, Albert Chase McArthur. Completed in 1929, the hotel’s original structure was built of sandstone blocks crafted on-site in a manner similar to that of Wright’s textile-block homes of the 1920s. The Biltmore Blocks are among the highlights of the guided history tours the hotel offers to the public. Rates from $237 per night. 800-950-0086.

Wright’s influence is apparent at another AAA Four Diamond hotel in downtown Scottsdale, Hotel Valley Ho, whose architect, Edward Varney, also studied under Wright. The Valley Ho became a go-to spot for Hollywood elites when it opened in 1956, and a major renovation completed in 2005 restored the midcentury-modern shine to its rooms, restaurant, and cocktail lounge. Rates from $229 per night. 480-376-2600.

Wright’s touch is also on display at the Grady Gammage Memorial Auditorium on the Arizona State University campus in Tempe. Built after Wright’s death in 1959, the auditorium is based on his plans finalized by a trusted aide. The circular building features a “floating” tier of seats, sublime acoustics, and a pinkish exterior covered in locally quarried rose quartz. The 3,000-seat venue hosts touring Broadway productions and other performances. Tours are available by appointment. 480-965-6912.

4. Hike among saguaros and sandstone 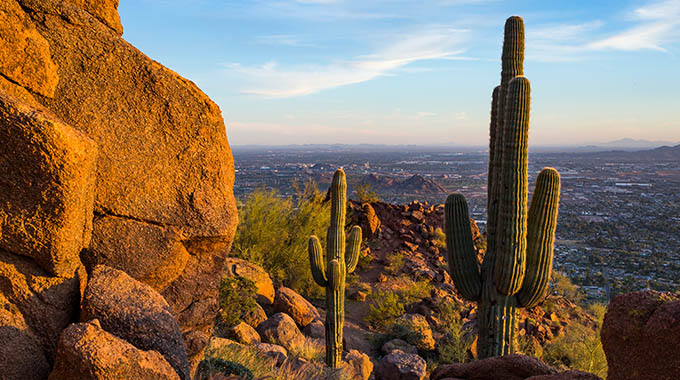 Reliably pleasant weather also makes pre-spring an ideal time to explore the area’s natural surroundings. But the desert’s rocky, cactus-lined trails require precautions that you might not think about. For example, locals recommend adding a big-toothed comb to your first-aid kit to remove stray “jumping” cholla spines that might attach to your skin.

Camelback Mountain, just a few miles north of downtown Phoenix, is one of the region’s most alluring hiking destinations. But its steep, rugged trails are also a leading source of helicopter rescues. Whether you ascend via the 1.2-mile Echo Canyon Trail or the 1.5-mile Cholla Trail, wear sturdy shoes and sunscreen, bring plenty of water, and follow all other trail safety precautions.

In the West Valley, White Tank Mountain Regional Park offers 30 miles of mostly mixed-use trails for hikers, horseback riders, and mountain bikers. The park’s easy, pedestrian-only Waterfall Trail (2 miles round-trip) is one of the region’s most fascinating because it leads past petroglyphs dating to the Hohokam era, which ended around the 15th century. For the first half-mile, the trail has a concrete surface that is wheelchair-accessible and barrier-free. 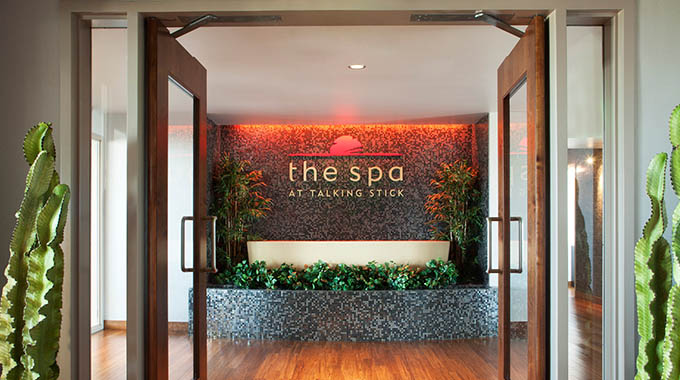 Even if you don’t stay at one of the region’s luxury resorts, you can get a healthy dose of pampering in their spas. For example, The Phoenician, Scottsdale (thephoenician.com/spa), which reopened its wellness facility in a new three-story building in March 2018, gives day visitors to its spa access to its hot tubs, saunas, steam rooms, and rooftop pool.

Services at the Well and Being Spa at the Fairmont Scottsdale Princess (fairmont.com/scottsdale/spa) include acupuncture and acupressure, in addition to body and skin-care treatments. Spa guests can also dine on health-conscious dishes in a climate-controlled atrium or beside the rooftop pool.

The AAA Four Diamond Talking Stick Resort (talkingstickresort.com/spa), in the Salt River Pima-Maricopa Indian Community (SRPMIC), next to Scottsdale, literally elevates spa services to a higher level, offering a range of treatments and amenities on the 14th floor of its 15-story casino hotel.

6. Bring your ‘A game’ to Phoenix golf courses 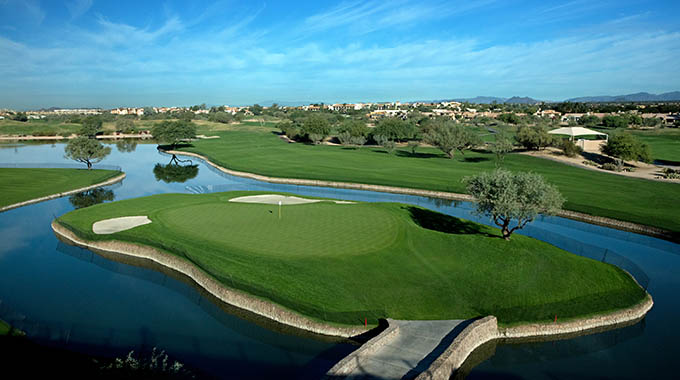 The valley’s reputation as a golf mecca speaks for itself. Its most revered courses, including Troon North, We-Ko-Pa, and the Stadium Course at TPC Scottsdale, which is home of the Phoenix Open, regularly appear on various golf publications’ “Top 100” lists.

Other finely manicured options are available throughout the valley, and you’ll find the best values on greens fees at Phoenix’s city-owned Papago Golf Course (602-275-8428) in Papago Park. Designed by Billy Bell, best known for San Diego’s Torrey Pines Golf Course, its length (7,333 yards from the championship tees) compares favorably to its famous local neighbors, including the Stadium Course (7,261 yards). 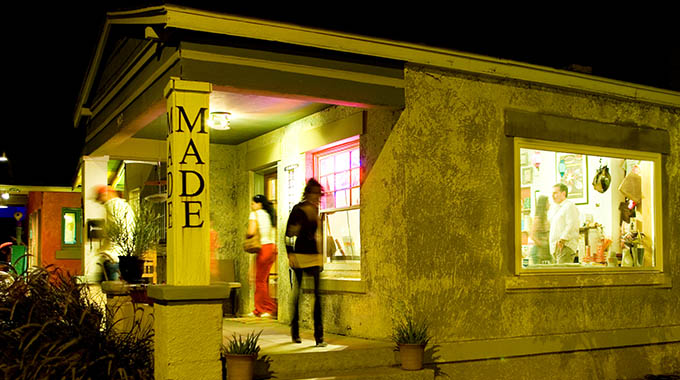 Made Gallery, in the Roosevelt Row Arts District in downtown Phoenix, has art and hand-crafted items for sale. | Photo by Jill Richards / Courtesy Visit Phoenix

The region’s most famous shopping district, Old Scottsdale, caters to most budgets and tastes with everything from fine arts and jewelry to T-shirts and trinkets. It’s also home to Scottsdale Fashion Square, where the Who’s Who of luxury retailers includes Jimmy Choo, Gucci, Nordstrom, and Neiman Marcus.

In downtown Phoenix, the Roosevelt Row Arts District is the place to go for edgy contemporary art and locally produced crafts.

8. Get on the fast track with desert mountain biking 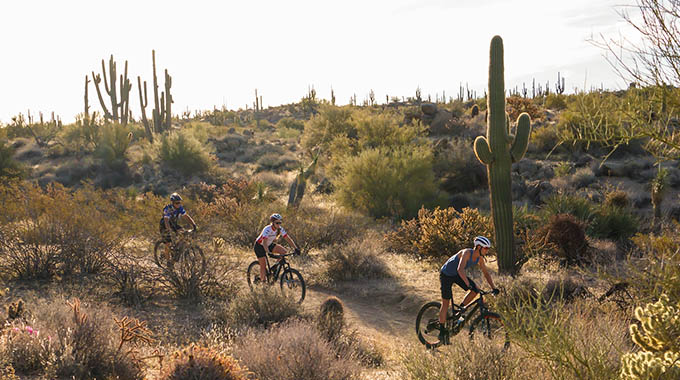 About 30 miles east of Phoenix, Usery Mountain Regional Park gives mountain bikers an easy introduction to the terrain on the 3-mile Blevins Trail. It loops past tall saguaros, stout barrel cacti, wildflowers, and trees, and its slight elevation offers sweeping views back across the valley. Advanced bike riders can test their skills on intermediate- to expert-level side trails or along the Pass Mountain Trail, a 7.5-mile round-trip offering thrilling technical challenges.

If you’re not traveling with your gear, consider renting from an outfitter, such as REI Co-Op Adventure Centers (formerly Arizona Outback Adventures) in Scottsdale, which delivers bikes and helmets to select trailheads. Rentals, $35-$95. 866-455-1601. 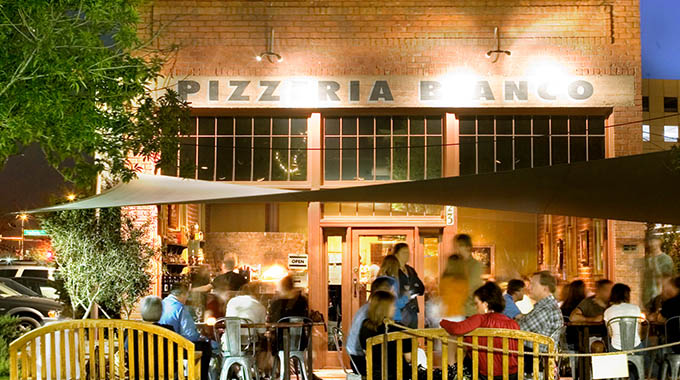 Downtown Scottsdale restaurants run the gamut from fine dining to casual. Near the middle of the spectrum is the Old Town Tortilla Factory, which offers Southwestern cuisine in a quaint adobe building with a spacious patio.

Nationally known chefs are prominent throughout the region. The Fairmont Scottsdale Princess, for example, is home to Bourbon Steak by Michael Mina and Richard Sandoval’s La Hacienda (fairmont.com/scottsdale/dining).

Just steps away is Pizzeria Bianco, a local landmark established by another James Beard Award winner, Chris Bianco. In the late 1980s, Bianco, a transplant from the Bronx, introduced artisanal pizza to the Phoenix area. Years later, the trend has become so popular regionwide that Phoenix was named best pizza city in the U.S. by Travel and Leisure readers in 2017.

On the 15th floor of Talking Stick Resort, Orange Sky brings indigenous touches to steak, seafood, and chops in its stylish rooftop restaurant and lounge.

10. Get a taste of spring training 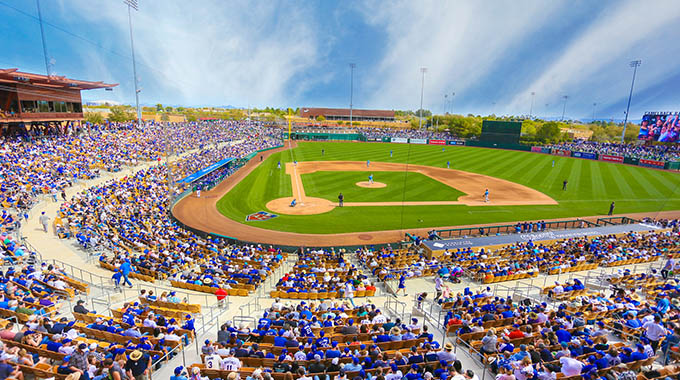 Did we mention baseball? With 10 stadiums across the valley, spring training offers a premier opportunity to soak in multiple ballpark flavors, literally and otherwise. At Glendale’s Camelback Ranch (mlb.com/camelback-ranch), which the Los Angeles Dodgers share with the Chicago White Sox, spectators can sample both teams’ signature frankfurters: Dodger Dogs and Chicago Dogs.

The Los Angeles Angels’ spring home at Tempe Diablo Stadium is only about 5 miles from the lively college-town ambience of downtown Tempe, home to Arizona State University and a beach park along Tempe Town Lake.

Young kids love the splash pad at the Peoria Sports Complex (peoriasportscomplex.com), which the San Diego Padres share with the Seattle Mariners. Grown-ups gravitate toward the Craft Beer Courtyard, which offers popular microbrews from Southern California, the Pacific Northwest, and central Arizona.

Salt River Fields at Talking Stick, which the hometown Arizona Diamondbacks share with the Colorado Rockies, offers not-to-miss game-day experiences. Set in the SRPMIC, it was the first MLB spring-training facility built on Native American land. The LEED Gold–certified facility’s design includes indigenous-inspired architectural features, such as a hogan that provides increasing shade as each day game progresses. The facility is also adjacent to Talking Stick Resort’s casino hotel and its nearby entertainment district. Attractions at the latter include an iFly Indoor Skydiving center and a Topgolf location, plus a kart-racing track and virtual reality games at Octane Raceway. Together, these amenities make it easy to turn an afternoon at the ballpark into a full day—or more—of fun.