Alabama’s 7 natural wonders: How many have you seen?

A fisherman casts his bait among a sea of Cahaba lilies. | Photo courtesy Alabama Tourism Department and Ken Gables

To visit the only surviving member of the classic Seven Wonders of the Ancient World, you’d have to fly to Egypt to see the Great Pyramid of Giza. But Alabamans have plenty of wonderful sites right in their state, starting with these seven natural wonders. 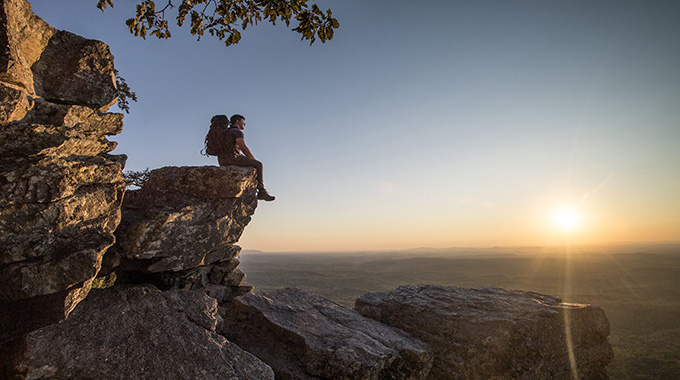 Alabama’s highest point sits above the clouds surrounded by approximately 300,000 acres of Talladega National Forest. “We refer to Cheaha State Park as an ‘island in the sky,’” says Superintendent Renee Raney. “At 2,407 feet above sea level, we often find ourselves surrounded by a sea of clouds.” But the altitude is far from the park’s only attraction. Waterfalls, tunnels of mountain laurels, and 300-plus avian species lure nature lovers to the rolling foothills of the Appalachian Mountains. Athletic types come for old-school mountain biking paths and access to the 271-mile Pinhoti Trail. This year brings a new interpretive center as well as renovations to the park’s cabins, chalets, hotel, and Vista Cliffside Restaurant, which is one of the best spots to catch a spectacular sunset over miles of mist. 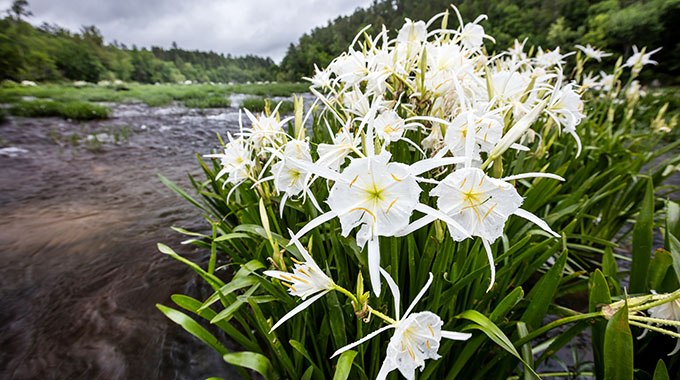 This beautiful flower can only be found in Alabama, Georgia, and some parts of South and North Carolina. | Photo courtesy Alabama Tourism Department and Art Meripol

Of the 69 rare and endangered species that call the Cahaba River National Wildlife Refuge home, none puts on a show quite like the imperiled Cahaba Lily. May through June, the refuge’s riverbanks break out in brilliant white starbursts. The aquatic spiderlilies only grow wedged into rocky shoals with fast-moving water and plenty of sunshine. And this Alabama spot is home to the largest-known stand of these idiosyncratic flowers, not to mention 13 other species of flora and fauna found nowhere else on the planet. The rustic refuge may be short on facilities, but there are plenty of spots along River Trace, a dirt road just off County Road 24, to drop a canoe into the Cahaba River for the best viewing. Locals bring camp chairs and coolers. Everyone brings a camera.

“You can’t really tell where the canyon wall stops and the night sky starts. They look like stars,” says Beverley Franklin, caretaker of a spot unique in North America for its epic colony of “glow worms.” Orfelia fultoni, known locally as dismalites, emit a bright blue glow and propagate twice a year in Franklin County’s Dismals Canyon. The best views of this otherworldly phenomenon, available on guided night tours, happen between April and June. “It’s magical,” Franklin says. And there’s more to explore in daylight hours. The 1.5-mile canyon floor boasts a primeval swamp lifted skyward during the Paleozoic era about 541 million to 252 million years ago, dozens of sandstone-sheltered grottos, waterfalls, land bridges, and a natural arboretum, which is home to 27 native species within 100 feet of each other. Another famous resident? A 370-year-old Canadian hemlock thought to have hitchhiked here via glacier during the Ice Age. The canyon is operated commercially by a privately run nature conservancy. Visit in a day trip or reserve one of two well-appointed cabins for an overnight stay. 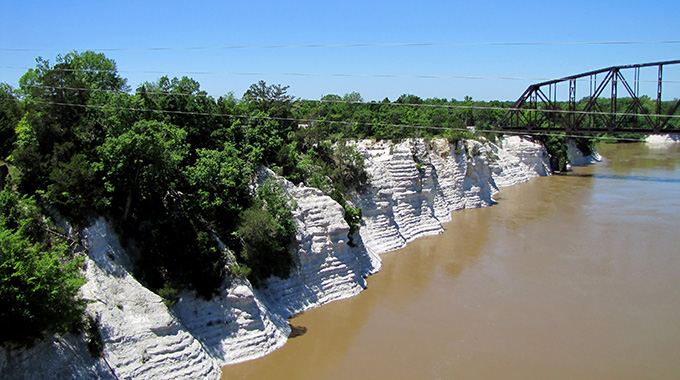 The White Cliffs of Epes are located on the Tombigbee River. | Photo courtesy Alabama Tourism Department and Joe Watts

On the state’s western edge, an alabaster memento of central Alabama’s former underwater life rises 50 feet above the Tombigbee River. The White Cliffs of Epes, formed around the same time as their famous Dover cousins, are made up of microscopic algae shells that drifted to the seafloor around 80 million years ago to become a massive chalk formation that spans three states. “To give you an idea of the size of these shells, a sugar-cube-sized piece of the chalk contains between 4 and 10 billion [shells],” says James Lamb, curator and director of Paleontology at the Black Belt Museum. The striking, 2-mile stretch in Epes offers visitors gorgeous photo ops and a scenic backdrop for boating. Find the best viewpoint on the bluff side of the Highway 11 bridge or post up on one of the river’s many popular sandbars along the opposite bank. The cliffs are not open to hikers, but the Fort Tombecbe archaeological site gives visitors a view from the bluff top. 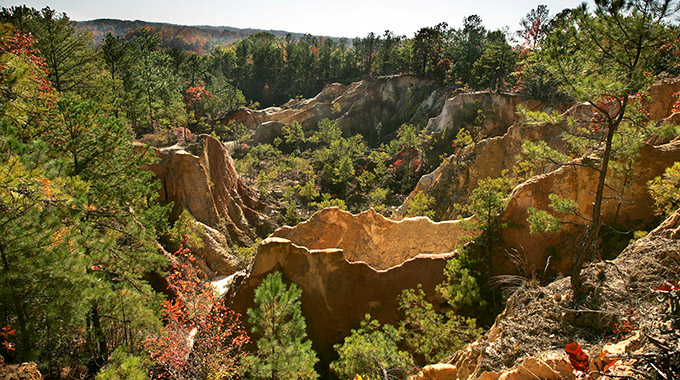 Just east of downtown Wetumpka lies the site of more drama than an entire season of The Real Housewives. Picture a massive meteor blasting to Earth with 175,000 times the energy of a nuclear bomb. The impact snuffed out life within a 40-mile radius and–because the area was underwater at the time–unleashed a towering tsunami. About 85 million years later, life inside the 5-mile-wide Wetumpka Crater has settled down a bit, but its rocky rim jutting through the pines still hints at past chaos. A self-guided driving tour leads visitors through seven educational stops that explain the crater’s most notable formations, like the iconic Bald Knob, a ridge of ancient metamorphic rock protruding 587 feet. Plan to spend about an hour. 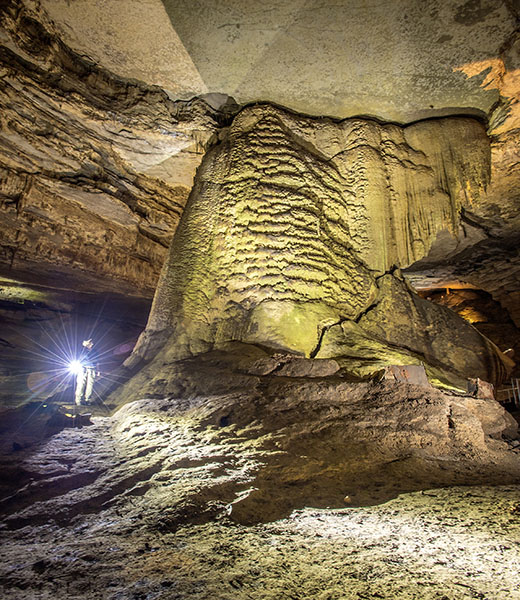 From the moment you pass through the gaping maw of Cathedral Caverns, you’re smack in the middle of a subterranean limestone wonderland. Meander through a forest of stalagmites, a darling of Hollywood productions like Disney’s Tom and Huck. “Usually, you’ll see one or two in any cave. In our forest, you have to walk around them, there are so many,” says Cathedral Caverns State Park Naturalist Randall Blackwood. There is a frozen limestone “waterfall” and Goliath, a stalagmite whose 243-foot girth ranks it among the planet’s largest. (Even the cave entrance, at 126 feet wide and 25 feet tall, is a contender for largest in the world.) Don’t miss the “cave bacon,” where instead of dripping down into a point, the stalagmite hangs in thin, drapes-like sheets. Guided tours last 90 minutes along a paved 1.5-mile (round-trip) path and must be reserved the day of your visit. 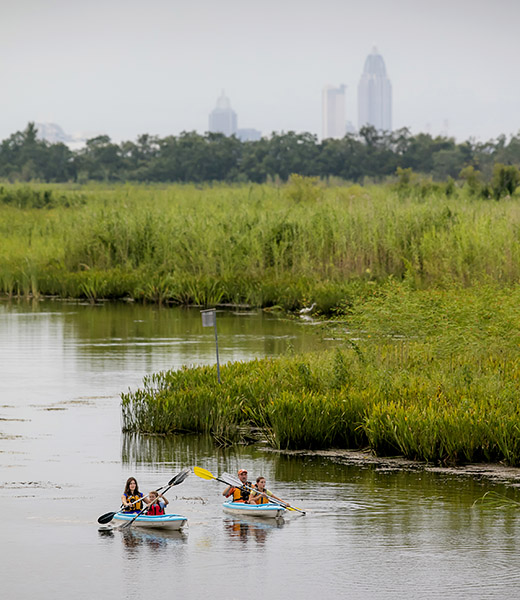 The nation’s second-largest river delta sits where five rivers–the Mobile, Spanish, Tensaw, Apalachee, and Blakeley–flow into Mobile Bay. Its picturesque bottomland forests, cypress and tupelo swamps, bogs, marshes and estuaries give shelter to more than 50 rare and endangered species. And what better way to tour the wetlands than by boat? Paddlers delight in the Upper Bartram Canoe Trail (roughly between Tensaw and Stockton) and the 19-mile Perdido River Canoe Trail (along the Florida border). Both offer campsites, floating platforms, and shelters. Boat access to the delta is also available at Meaher State Park and the 5 Rivers Delta Resource Center, outside of Mobile.

Travel journalist and guide author Jessica Fender didn’t eat breakfast and has a hankering for that cave bacon. Follow her adventures, domestic and international, at travelerbroads.com.