The Furka pass on the Grand Tour of Switzerland. | Photo by Markus Buehler/Switzerland Tourism

Ah, Locarno. La bellissima cittá! I gazed in wonder at this sun-kissed town on the ancient crossroads to Milan. After driving past palm-lined, sailboat-dotted Lago Maggiore, I strolled onto the Piazza Grande, which was framed by plunging mountainsides and pastel-hued restaurants. Dining on steaming dishes of risotto alla milanese in this balmy, perfetto paradiso, I thought, Surely, this is what they mean by la dolce vita, the sweet life. Locarno is truly the best of Italy.

Except this ain’t Italy.

Locarno and the surrounding Italian-speaking Ticino canton are in Switzerland. 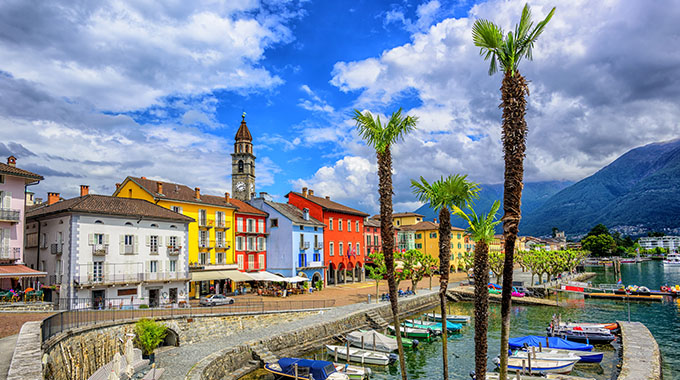 In fact, this famously neutral nation of 8.6 million—the rare country formed by choice, not conquest—is home to four distinct ethno-linguistic groups: German is spoken by about 63 percent of the Swiss, French by 23 percent, Italian by 8 percent, and Romansh, a Romance language descended from Latin, by 0.5 percent.

“We’re different, but we all feel Swiss,” my German-Swiss guide Maria Sägesser had told me in Zurich, after I’d flown into the country a few days earlier. “And we all have a positive effect on one another.”

I wanted to learn more about the country’s different ethnicities and how they coexist. So, being a lifelong cross-country road-tripper, I rented a Volkswagen Touareg in Locarno and drove a portion of the Grand Tour of Switzerland, a 994-mile route that loops around the country, directing drivers to major points of interest, including 31 Instagram-friendly photo spots. 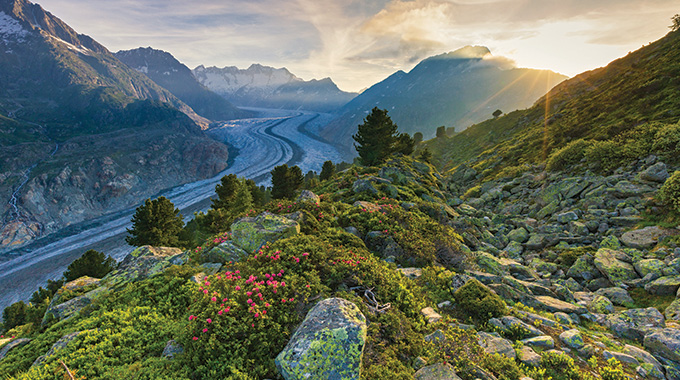 Leaving Locarno, I drove westward on a highway of flawless, butter-smooth asphalt that seamlessly flowed over bridges and into ingenious open-sided tunnels sculpted into cliffs.

My first stop was the 14-mile-long Aletsch Arena, the Alps’ longest glacier, which looks like a gargantuan, white parking lot ramp wrapped around a mountain. 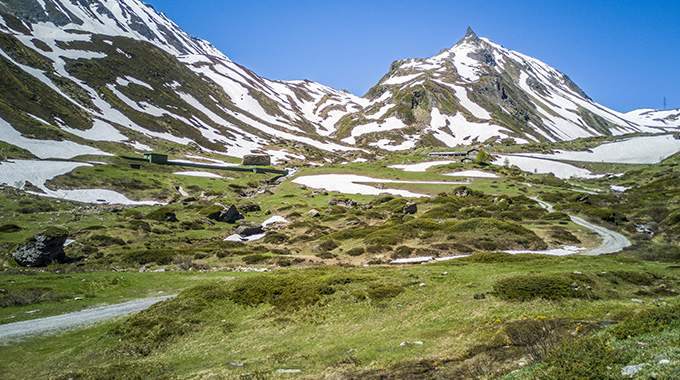 Next, at the insistence of my German-Swiss guide Nadine Blatter, I departed from the Grand Tour route to drive up 8,130-foot-high Nufenenpass, the country’s second-highest pass traversed by a paved road. An hour later, I was alone—freezing in a snowstorm—in an empty restaurant parking lot next to a 10-foot-tall snowdrift. I stood transfixed by the sight of the wild switchback I had just zigzagged 4,000 feet up from the tiny valley below. 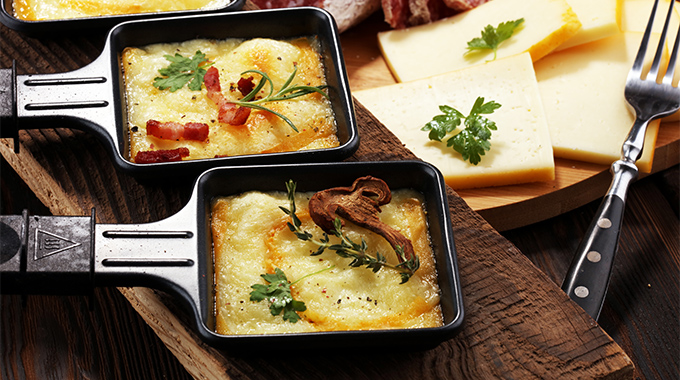 That night, after getting lost while driving yet another pass and disappearing into a seemingly endless tunnel, I arrived 90 minutes late for dinner in the French-Swiss town of Sierre. I was concerned: In Zurich, a German-Swiss tour guide had scolded me when I was just a few minutes late to an appointment. But my guide here, Benoît Caloz, wasn’t a bit upset when I arrived at the Château de Villa restaurant.

“We French are more laid-back,” he explained, as we sat down to a raclette dinner, a sampling of five brick oven–melted cheeses. One was salty; one had a savory, woodsy essence; one, Bagnes from the Verbier region, was so creamy it seemed to melt on my tongue.

While the German- and French-Swiss delight in aiming little zingers at each another—for example, “the French vote liberal and are too willing to spend a sunny afternoon in a café,” while the Germans “vote conservative and need to relax”—they fully agree on the merits of cheese (more than 450 Swiss varieties) and chocolate (the Swiss eat more of it than anyone, 22.9 pounds a year). 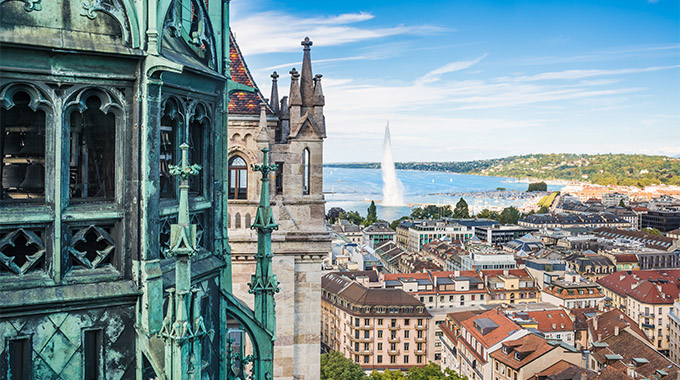 View of Geneva from Cathedral of Saint-Pierre and the Jet d'Eau fountain in the distance. | Photo by Alexander Demyanenko/stock.adobe.com

The next day, I again detoured from the Grand Tour to drive into France along the south side of Lake Léman. As I headed into Geneva, a 460-foot-tall waterspout came into view. The city’s landmark Jet d’Eau, a former safety valve for a hydraulic power network that authorities turned into art 100 years ago, exuded a whimsical, carefree quality I hadn’t felt in businesslike, German-speaking Zurich. As I sat on the fountain’s long concrete pier watching a young mom wait patiently for her soaked 10-year-old son as he gamboled back and forth through the artificial rain, it all seemed so amazingly ... French. 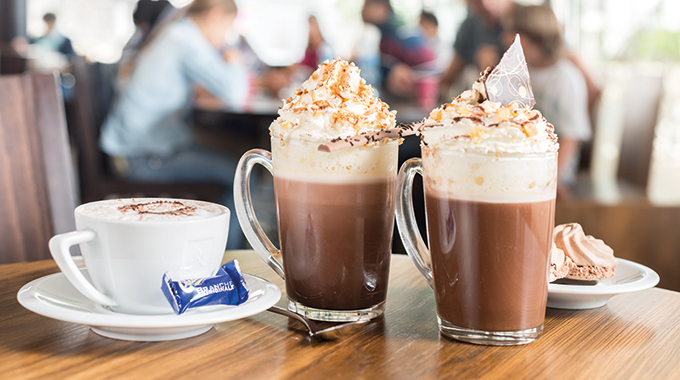 Leaving Geneva, I took another detour from the Grand Tour route to the tiny village of Broc for a pit stop at the Cailler-Nestlé chocolate factory museum (currently only the store and café is open). Chocolate-maker Daniel Peter and his neighbor Henri Nestlé, a condensed-milk and baby-food manufacturer, invented milk chocolate nearby in 1875. Determined to experience everything, I overdid it, sampling every variety—dark, white, nut-filled, and milk chocolate—several times.

In the morning, groggy from my food coma, I cruised through undulating, snowcap-framed farm country in mountain valleys painted with greens, whites, reds, and yellows so vivid that they evoked computer animation, and I entered German-speaking cantons. No stranger to lengthy Alpine tunnels, I now experienced something new: numerous short passageways earth-wormed straight through 100-foot-tall grassy hills—sometimes so close to farms on the surface that I could see the color of a farmer’s beret as he tended his cows.

At that moment, I understood why Swiss tunnels, bridges, and switchbacks had been designed so creatively and were so ubiquitous. They had to be; Switzerland had to master them to meld its mountain-and-valley isolated cantons—now 26 of them—into a nation. 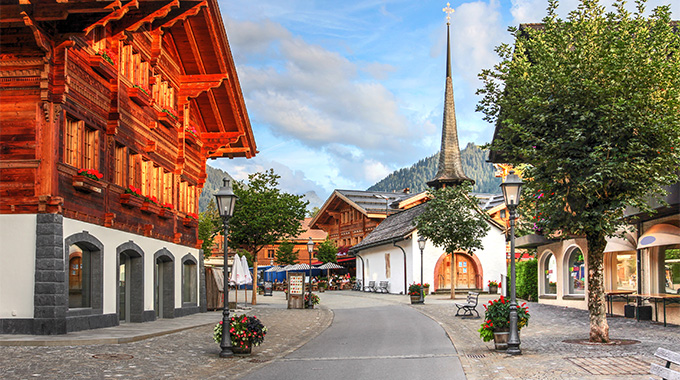 St. Nicholas Chapel stands out on the promenade of Gstaad. | Photo by Bogdan Lazar/stock.adobe.com

Before long, I arrived at the posh ski resort town of Gstaad. Think Beverly Hills with gondolas. While strolling among storefronts emblazoned with names such as Cartier, Givenchy, and Louis Vuitton, I ran into a 74-year-old vacationing German-Swiss man who’d emigrated from Switzerland to Australia in the 1960s. As we talked, he groused that things had changed in Switzerland—for the worse.

“When I was growing up, it was formal,” he said in his Aussie-German twang. “You shook hands when you met and called them Mr. and Mrs. But now, it’s first names, hugs, kisses—so ... Latin.” As a joke, I shook his hand goodbye, then feigned a kiss on his cheek. He recoiled, to the glee of his huggy 40-year-old Swiss-Aussie niece. 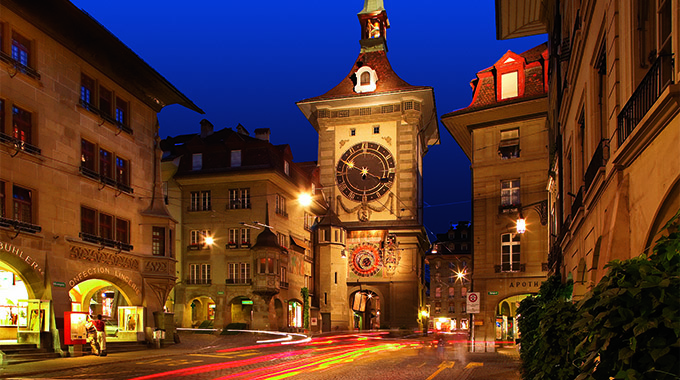 After a 30-minute hike near Interlaken that stretched to three hours because of a surprise photo op with an ibex, I arrived in Bern two hours late, which earned me a lecture from my latest guide, Nicole Schaffner. After dinner, she walked me down to the 16th-century Zytglogge Clock Tower or, as she put it, “the only World Heritage site where you can do your business,” noting the fenced-off urinal at its base).

At the Parliament building, she explained that every word and bylaw is listed in the four official languages, which are spoken in their regions, taught in schools, and printed on Swiss franc bills.

“Three?” I said. “You guys learned this from the French and the Italians—and they only do two.”

“I know,” she said. “We German-Swiss are very competitive.”

This article is reprinted from the January/February 2018 issue of Westways magazine in memory of Roy M. Wallack, who died late last year. He was a frequent contributor to AAA magazines.