You don’t have to know anything about wine to enjoy La Rioja, the famed wine region in northeastern Spain. At most bars and cafés, all you need to do to get a nice glass is to answer two questions. First, red or white (tinto o blanco)? Next, if you requested red, then joven o crianza—a young wine or one that has some oak aging? That’s it, all the Rioja wine education you’ll need.

I was reminded of this recently when my friend François and I made a tapas crawl through downtown Logroño, the capital city of the Rioja region. Here, crowds flock to more than 100 tiny bars in a two-block area for small plates and wine. Pedro Barrio, a local dentist who also happens to be president of the Rioja Academia of Gastronomy, led us to Calle del Laurel, the epicenter. “I know there are a lot of tapas in Spain, but Laurel is special, it’s very unique,” Pedro said. He added: “Here we call them pintxos”—the Basque name for tapas. “In the rest of Spain they say tapas, but in the north, it’s pintxos.”

We started at Bar Soriano, where we sipped a young red wine and ate grilled wild mushrooms in garlicky butter sauce and topped with a skewered shrimp. From there, we hit Bar El Perchas, which sold only two pintxos: pig’s ear in a spicy sauce, and a fried pig’s ear sandwich. François laughed and said, “Can you imagine a bar anywhere else in the world besides Spain that could survive on a menu of two pig’s ear dishes?” We washed it all down with an oaky red.

As the night went on, it seemed like everyone in La Rioja, from teenagers to grandparents, was on Calle del Laurel. Despite the pandemic, the streets were crowded—though almost everyone was masked. At one of our last stops, Bar Sebas, we ordered a traditional pepper stuffed with meat. “Ah, my grandmother made it exactly the same way,” Pedro said as he took a bite and washed it down with a glass of crianza. He grew philosophical. “Rioja is a land in which the culture of wine and gastronomy is part of the landscape.”

That’s not an overstatement. Located inland from the coastal cities of Bilbao and San Sebastian, Rioja has been a wine-making region for thousands of years. The area rides the divide between the Spanish and Basque worlds. It’s a region of complex history, fertile soil, and, of course, beloved, world-class wine.

Hiking in a landscape of wine

I’d been to La Rioja a number of times, mostly to taste wine, but also to enjoy the countryside. So when I returned this past summer and based myself in the small town of Haro, I made sure to schedule some hikes. When you hike in the region, you’re literally walking through a landscape of wine—specifically the endless vineyards that grow grapes for what will eventually be the tinto (tempranillo, garnacha, graciano, mazuelo) or the blanco (viura, malvasía).

The Ebro River courses through Logroño, the capital city of the Rioja region. | Photo by Matyas Rehak/stock.adobe.com

One of my favorite hikes is along the Ruta Hóndon, a path that follows a meandering section of the Ebro River, past a 13th-century bridge, with the Sierra Cantabria mountains looming in the distance. In antiquity, the Ebro separated Roman territory from Carthage. The river now serves as the divider between Spanish Rioja and Basque Rioja.

The 3,000-year-old mini-Stonehenge known as the Witch’s Hut. | Photo by Basotxerri/stock.adobe.com

From the station, I hiked about 3 miles to the remains of a Celtic temple that overlooks the vast spread of vineyards. The Celts made wine here long before the Romans arrived. And even before them, the Phoenicians, who arrived around 1200 BC, tended grapevines. But civilization existed here long before that.

All along the Basque side of the Ebro valley—called Rioja Alavesa—from Labastida to Laguardia, you can see a series of dolmen, or huge stone tombs, built 3,000 to 6,000 years ago, as well as the remains of an entire Neolithic village.

A few days later, I drove to the village of Elvillar to see the Chabola de la Hechicera—the Witch’s Hut—a 3,000-year-old mini-Stonehenge where, legend has it, a witch could be heard singing on the morning of a midsummer’s day. I didn’t hear any singing, but I continued 15 minutes down the road, to the village of Villabuena de Álava, home to 300 residents and more than 40 wineries. 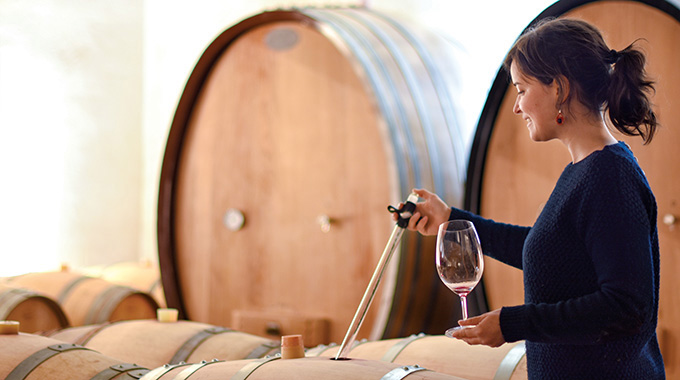 There, I met Sandra Bravo, owner and winemaker at Sierra de Toloño. She’s among La Rioja’s exciting new generation that’s committed to organic farming, low-intervention winemaking, and growing grapes at high altitudes, some over 2,000 feet in elevation. The reason for planting higher, amid cooler temperatures, was obvious during the hot days of my visit. “Now with climate change, everyone is climbing the mountains,” she said of local growers.

She took me on a tour of her vineyards, showing me one with 92-year-old vines that she called Malpuesto, meaning “badly located.” Traditional large wineries had avoided the area’s small plots for years. “These were the plots of poor people, who planted where they could,” she said. Now, as temperatures rise, sites like this are the key to Rioja’s future.

We visited one of her favorite vineyards, called Centenarian, planted over 100 years ago. Huge stone slabs similar to prehistoric dolmens ring the terrace above the vines. “We call this the Agnostic Cemetery,” Sandra said. “It’s very spiritual. When I’m here, I feel it. There’s something here I can’t explain.”

Evolution of winemaking in La Rioja

La Rioja is home to two distinct styles of wine and I love them both, in different ways. When I visit an old-school winery like La Rioja Alta, I love the bold, muscular tempranillo wines that pair with chuletas or suckling pig grilled over an open flame. When I check out a new-generation producer like Sierra de Toloño or Artuke, I’m taken by how fresh, light, cool, and energetic the wines are—wines that would pair with the way I eat at home (where I’m not constantly dining on grilled meats).

Most people who travel to La Rioja visit at least a few of the famous wineries. In Haro, it’s easy to spend an afternoon winery-hopping on foot, from Muga to La Rioja Alta to Gómez Cruzado to Roda to CVNE. (Some wineries, such as R. López de Heredia, require an appointment.) Outside of the towns, plenty of car services and private wine tours allow wine tasters to safely leave the driving to someone else.

In the village of San Asensio, I took an electric bike tour through the surrounding vineyards with Estela Lecea, whose family owns Bodegas Lecea. The views of the endless patchwork of vines stretching to the mountains were breathtaking. San Asensio was once home to more than 300 cave cellars. From the 16th century until the 1970s, wine was made in underground caves beneath the village. Estela’s father, Luis Alberto Lecea, was one of the first in the area to sell wine in bottles.

The 1970s was a time of rapidly changing technology in Spanish winemaking, with more official guidelines, more barrel aging, and more need for scale. The oaky style of wine that most people associate with Rioja began to take hold during this period. Most winemakers in the village abandoned their wineries and joined big cooperatives. Today, three large wine cooperatives operate nearby, with thousands of wine-growing members.

Said to be the only independent winery to remain in San Asensio, Bodegas Lecea still makes and ages all its wine underground. It has acquired the caves of four other families and visitors can tour them. “For us, it’s very important to preserve this history,” Estela told me. As we descended the stone stairs, I felt as though we were entering the 16th century. 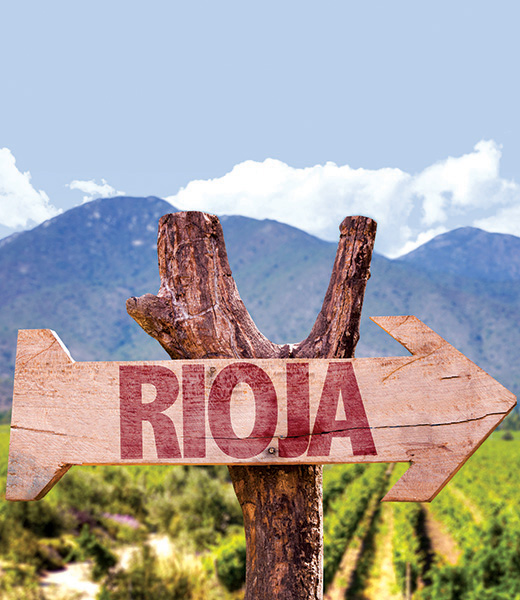 Do you know the way to La Rioja? | Photo by Filipe Frazao/stock.adobe.com

Part of preserving that history has been to reincarnate an old style of winemaking, the Corazón de Lago, in which whole clusters of grapes are left to ferment in tanks in what’s called carbonic maceration. In a low-oxygen environment, the grapes begin to ferment from the inside without pressing and eventually release their juices. Finally, the grapes are treaded by foot instead of being pressed. (Visitors during Lecea’s fall festival can even do a little foot stomping themselves.) The result is very young, fruity, drinkable wine that’s released over just a few months in the late spring. Corazón de Lago is a classic example of what’s old is new again.

That’s true of La Rioja in general. It’s a dynamic time as a new generation of winemakers returns to the old ways. When I visited Arturo de Miguel of the coveted biodynamic winery Artuke, in the village of Baños de Ebro (or Mañueta in Basque), I found a similar story. We toured his high-altitude vineyards, overlooking both the Basque and Spanish sides of the Ebro. Arturo told me that even though he is Basque, his parents didn’t speak the language—it had been banned during the Franco dictatorship.

Like many of his generation, Arturo learned the language in school. “We are the first Basque generation in La Rioja for years who can speak Basque,” he said. Likewise, he knew that any new approach to Rioja winemaking had to take a similar long-term view.

“People say ‘Oh, you’re the new style of Rioja,’ but we’re actually the real classic style, the way they worked 100 years ago, before the train station and before phylloxera came to France,” Arturo said. “Maybe if we keep speaking about this new style, in 20 years people will finally understand. Maybe we are working for the next generation.”

At press time, Spain was welcoming vaccinated Americans, although the U.S. State Department was urging Americans to avoid traveling to Spain due to the COVID Delta surge. Check with your travel advisor for updates.

Both Haro and Logroño make great home bases to visit the region, depending on whether you want a small-town feel (Haro, population about 11,000) or a small city (Logroño, population about 150,000). In Logroño, more than a dozen hotels are located near the tapas epicenter of Calle del Laurel, including NH Logroño Herencia Rioja (rates start at $90) and Hotel Calle Mayor (rates start at $150).

Besides the tapas crawls in both Logroño and Haro, check out classic dining spots like Terete in Haro (famous for its roasted lamb since 1877), humble taverns such as Mesón Chomin in Briñas, and the Michelin-starred restaurant Venta Moncalvillo in Daroca de Rioja.

For more on Rioja wine, including maps of wineries, visit riojawine.com.

Jason Wilson is the author of the books Godforsaken Grapes, Boozehound, and The Cider Revival. He writes the newsletter Everyday Drinking.