On a blue-sky afternoon, you can almost hear the beads of condensation rolling down a chilled michelada glass. A small group of visitors lazes on palapa-shaded loungers; in the distance, a foursome walks the wet ribbon where sand meets the Pacific; and two twentysomething hippie types giggle from their hiding spot in a nearby lifeguard tower.

Welcome to the busiest section of beach in San Francisco, Mexico.

One hundred ninety-two miles of golden, rain forest–fringed coastline string together little pearls of slow-paced beach towns like this one. The less-developed Riviera Nayarit stands in stark relief against more frequented Mexican destinations such as Puerto Vallarta and its megaresorts to the south or Cancún, with its all-inclusives, on the country’s east coast.

Nayarit, on Mexico’s west coast, has flirted with fame from time to time for its appeal as a surf destination, for shout-outs from poet Henry Wadsworth Longfellow (“The Bells of San Blas”) and Mexican rockers Maná (“En el Muelle de San Blas”), and for its historical significance. It’s said to be the birthplace of Mexican culture. The Aztecs built ringed streets on Mexcaltitán.

But somehow, Nayarit has stayed largely off the radar, giving vacationers the chance to know a quieter Mexico, as well as work on their tans. The region offers a beach town for every taste. Here are 3 to consider.

This tiny village—affectionately nicknamed San Pancho by locals—defines “laid-back.” Visitors will find a lively music scene that spills onto cobblestone streets. But the main drag, Avenida del Tercer Mundo, points to the star attraction: almost a mile of pristine, barely populated beach dotted with a handful of restaurants and not much else.

San Pancho’s rep for intermittent rough waters (check conditions before diving in) keeps away all but experienced surfers, saving the solitude for sunbathing, reading, and listening to the rhythmic crashing of waves.

If you must leave the lounger, take a 30-minute drive to the launch point for two island jewels: Islas Marietas’ beach and Isla El Coral’s stellar snorkeling. Tours with Santa Madre Adventures start at $70 per person for El Coral, $150 for Islas Marietas (with hotel pickup). 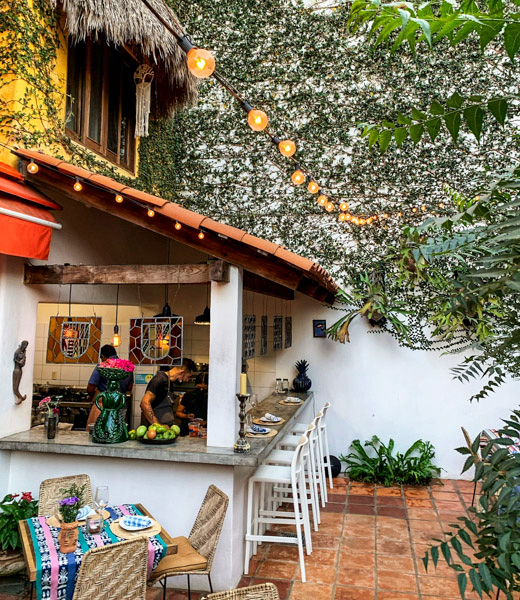 Park under a palapa with your toes in the sand while you tuck into Las Palmas’ marinated tuna tostadas piled high with lacy fried onions. Stay for San Pancho’s epic sunset. Entrées, $5–$10.

Thoughtful touches go beyond the artfully eclectic decor at Hotel Cielo Rojo, which offers massages in the privacy of its spacious rooms, as well as frequent tequila tastings (be sure to designate a driver if you plan to drink alcohol). From $65 per night. hotelcielorojo.com.

The 10-room Casa San Pancho blends Mexican style with South Asian flair in a tucked-away neighborhood about a 10-minute walk from the beach. From $102 per night. casasanpancho.com.

Profile: Steeped in history, made for nature lovers 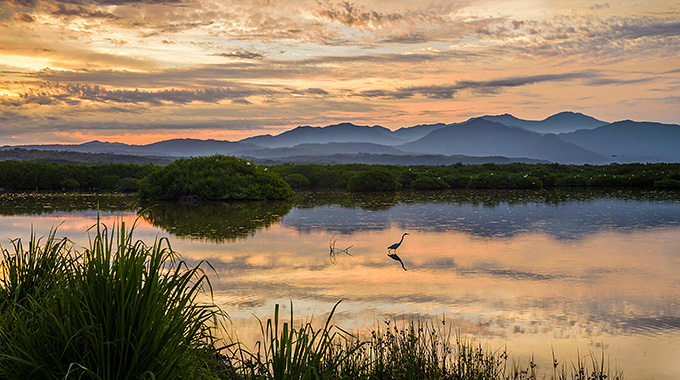 As home to both a Spanish colonial military fortress and one of the world’s longest surfable waves, San Blas has reinvented itself time and again. These days, the port town nestled against a biological preserve is an epicenter for naturalists, especially birders seeking to spot some of the 500 species that appear in the area throughout the year. Add its Plaza Principal, architectural ruins, and sprawling beaches, and a Mexican vacation all but plans itself. 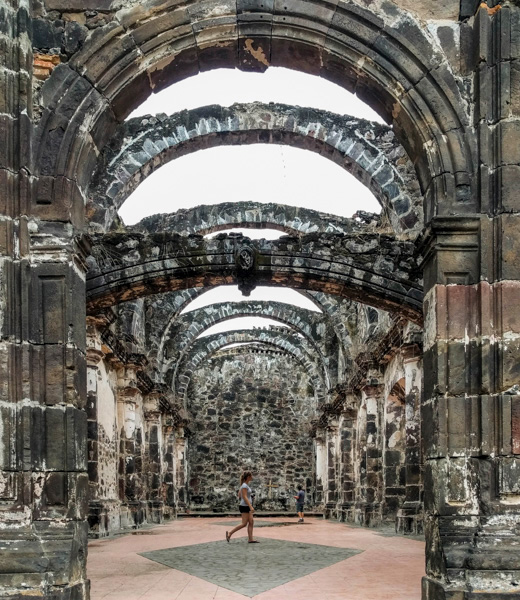 Overnight with blue-footed boobies and other seabirds on Isla Isabel, where you can snorkel above a coral reef or hike with a Nayarit Adventures guide past creatures unafraid of humans. Two days, one night, $179 per person; tent and sleeping bag rentals available. Or take a day trip to Mexcaltitán, where you can browse a copy of what’s left of the Aztec codex at a small, well-curated museum.

Drop into any of the casual open-air eateries that line the seaside for the local specialty: pescado zarandeado, butterflied fish grilled over coals in a wood-fired oven.

For one of the state’s most refined meals, reserve a table at the acclaimed El Delfín, where Paris Le Cordon Bleu–trained chef Betty Vázquez treats fresh seafood with creative sophistication. Entrées, $10–$15. www.garzacanela.com/en/restaurante-bar-el-delfin.

Nearby, a restored 1883 mansion now houses the Hotel Hacienda Flamingos, where courtyard fountains burble and colonial charm abounds. From $58 per night. sanblas.com.mx/hotelhaciendaflamingos. 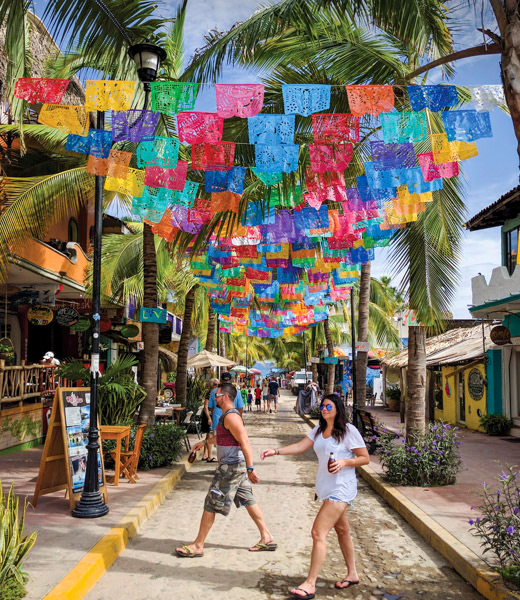 A colorful street scene in Sayulita. | Photo by Jessica Fender

Palm-lined cobblestone streets. A parade of surfers, boards in hand. Candy-colored papel picado flags fluttering in the breeze. Wandering Sayulita, where Mexico cool takes on an international sophistication, is like walking through a living postcard. A longtime expat favorite, this stylish village is one of the more developed along the Riviera, with bars and eateries lining the beach. Once you snag a spot, the people-watching is superb.

Since it’s hard to pull off surfer chic without a board, catch a few waves with Lunazul surf school. Lessons from $40 for 90 minutes. 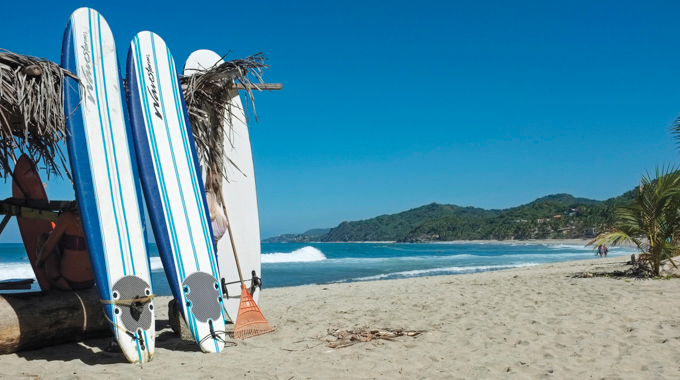 Surfboards for hire in Sayulita, Mexico | Photo by John Cairns/Alamy

Let the line of locals point the way to Naty’s Cocina, a streetside taquería that stuffs tacos with pork and nopales, chicken mole, and ample vegetarian options. Get there early; the lunch spot closes at 3 p.m. (or when it runs out of food). About 70 cents per taco.

At Villa Amor, watch beach life bustle by from the ocean-view terrace of one of the luxury villas a five-minute walk from town. From $180 per night. villaamor.com.mx.