Shhhhh,” my pedicab driver, Jorge, hissed, pointing to leaves rustling in distant treetops. A dark blur pinballed from tree to tree, coming closer with every leap. Another ﬁgure followed, then another in a chain of outstretched limbs as seven howler monkeys swung right over our heads. With gleeful grins, Jorge and I exclaimed, “Buena suerte,” good luck. Fortune was on my side.

I had tromped through this humid, fetid jungle surrounding the ancient Maya city of Coba, near Tulum, Mexico, at least a dozen times over the past three decades without ever spotting a monkey. This encounter seemed magical. In the mid-’80s, I backpacked along Mexico’s Caribbean coast south of Cancún (now called the Riviera Maya) while researching a guidebook. Back then, cola bottles upended on sticks marked sandy paths to campgrounds and temples along the two-lane high-way edging dense tropical forests and pristine beaches. I hung my hammock beneath arcing palms and swayed with the sleep of a naive adventuress falling in love. CUIDA SU VIDA NO SE DISTRAIGA, warned a rusty sign beside an especially gorgeous bay. “Be careful for your life, don’t be distracted.” A snapshot of that sign still hangs beside my desk, reminding me to appreciate both today’s dazzling creature comforts and yesterday’s primitive solitude.

Among ancient Maya spirits in Coba 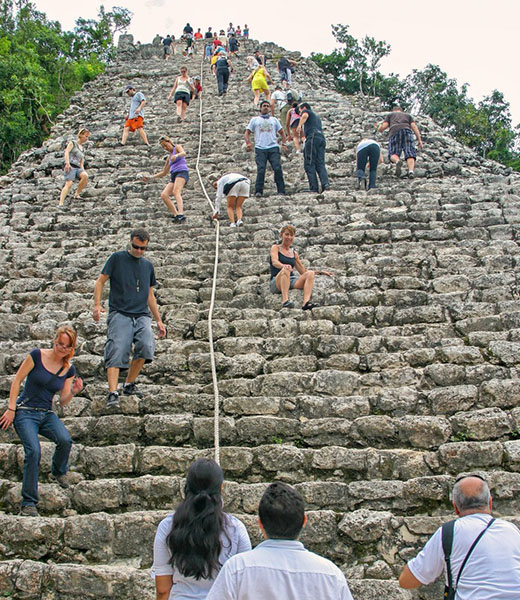 Hoping to replicate my long-ago spontaneity, I plotted a spring trip to retrace some of my early steps along the Riviera Maya. Coba was my first stop, and I’d awoken with the roosters that morning. Skipping even that crucial first cup of coffee, I raced to the archaeological site only to be turned away by a grouchy attendant pointing to his watch. Darned if I wasn’t 10 minutes early.

The second I obtained a precious admission ticket, I turned toward a cluster of bicycle taxis. Jorge, eager for his ﬁrst catch of the day, beckoned me to the passenger seat. He energetically jetted toward Nohoch Mul, Coba’s tallest temple, as the sun rose behind steep limestone mounds, scattering dust streams and foreshadowing oncoming heat.

Twenty-eight years ago, I had scampered up Nohoch Mul’s hundred or so crumbling rock steps to the crest, where I’d savored a bird’s-eye view of the paths called sacbes connecting the ancient Maya cities. At 130 feet up, bees had stopped buzzing, birds ceased chirping, and the monkeys must have been napping in the heavy, humid air. I felt an overwhelming sense of mystery and privilege, as if aluxes (Maya fairies) high in the heavens were watching over me. This time around, my aging knees decided tackling a dozen steps was sufﬁcient achievement. Still, as the adrenaline waned, I felt a sense of peace, honored to be in this place among the spirits of the ancient Maya. 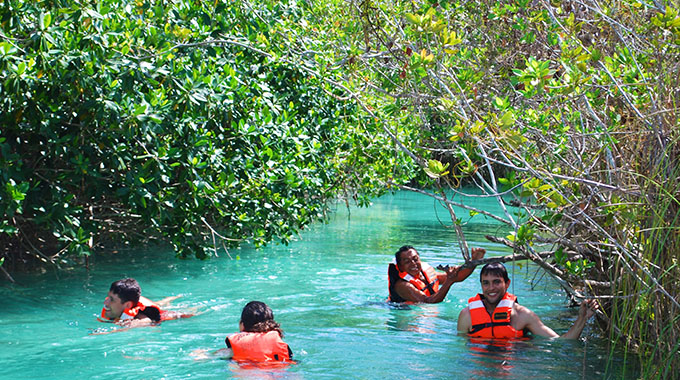 People swim in the ancient canals of the Sian Ka’an Biosphere Reserve. | Photo by Maribeth Mellin

In the mid-’70s, fancy hotels were just beginning to claim prime Cancún beaches. Further development along the coast was inevitable, and I have always been grateful for my long-ago explorations when vast sections of the area were uninhabited. Fortunately, the government had the foresight to protect precious lagoons, mangroves, and coastline early on, creating the Sian Ka’an Biosphere Reserve. Designated a UNESCO World Heritage Site in 1987, the reserve protects almost one-third of Mexico’s Caribbean coastal region.

Today, only a few companies are allowed to bring small tour groups to the reserve’s crystal-clear lagoons and canals once used as a major trade route by the Maya. I’ve grown fond of the locally trained Maya guides at Community Tours Sian Ka’an, and I joined their Ancient Canals excursion on a sunny morning. We boarded a small skiff at the edge of Muyil Lagoon’s glassy turquoise water. Narrow channels etched in thick grasses appeared at the far edge; only an experienced guide could know which passageway leads to the sea.

Our boat stopped beside a small Maya temple, where tradesmen and pilgrims once left gifts to appease Xtaba, the goddess of seduction. Apparently, the lady enjoyed luring travelers far into the tangled mangrove maze, leaving them to wander fruitlessly and eventually die (in a somewhat blissful state). Either the story is a myth or my boat captain had powers to thwart her siren song.

After exploring the temple, my fellow tourists and I passed around life jackets in preparation for a swim in the canal. “Put it on like a diaper,” said Captain Maximo, demonstrating by stepping into the armholes of a neon orange life jacket. His awkward example proved sensible as I jumped into the chilly water, bobbed upright, and began gliding past bright red bromeliads and archways of twisted mangrove branches. Staying far behind my giggling, chattering companions, I drifted languorously while watching clouds form into smooching seahorses and galloping dragons.

I caught up with the group at a dock, where we reboarded our skiff and sailed on past other small temples to the coastline where I’d camped in the ’80s, ignorant then of its natural and historical importance. I’ve since learned that early Maya tradesmen would have continued paddling their bark canoes toward unseen shores throughout the Caribbean, carrying precious stones and other treasures along with the latest news of conquerors and kings. I half envied their journeys as I imagined their sense of discovery.

A slow pace in Puerto Morelos 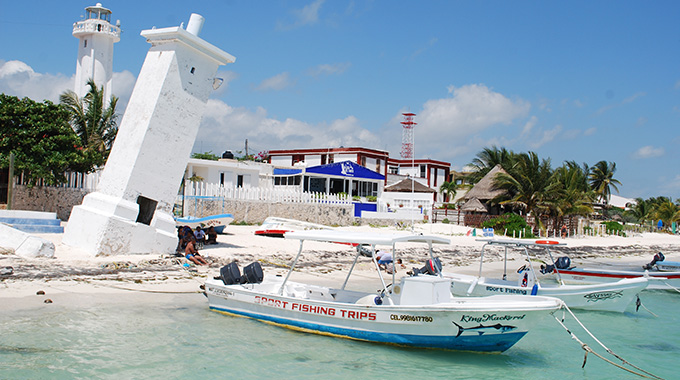 Later, my mood withered beneath gloomy skies as I drove toward the leaning lighthouse in Puerto Morelos, my favorite town on the coast. You’ve got to admire a city that counts a broken-down lighthouse as its most beloved landmark, especially when Cancún’s slick pleasure palaces lie just 24 miles north. Puerto Morelos has somehow remained one of the most low-key, unpretentious towns in the Riviera Maya. Sure, large resorts have risen north and south of town and vacation homes line the sand, but that lighthouse, blown asunder by Hurricane Beulah in 1967, remains a comforting reminder of my ﬁrst overnight on a Puerto Morelos beach.

The town’s biggest attraction, beyond its semi-traditional authenticity, is its proximity to the Mesoamerican Reef, the longest reef in the Western Hemisphere. Visions of past immersions into aquamarine water with sparkling sunlight high-lighting pink and gold corals and yellow tropical fish dissolved in the smothering humidity. Wild winds churned that day’s dark gray water into an unappealing frenzy. Shunning gloomy predictions, I believed the weather would improve in time for a snorkeling trip.

After unloading my gear at the modest Posada El Moro, I headed straight to the beach for tangy ceviche, spicy pulpo (octopus) tacos, and a cerveza. Mindlessly chomping on fresh, warm chips, I watched a lady in an embroidered huipil dress lead a group toting umbrellas and chairs along the sand. Sated and somnolent, I joined others aimlessly strolling along the waterfront malecón.

“People move differently here,” joked the posada’s manager as I absentmindedly passed the front desk, headed for my bed and a lengthy siesta. When the evening air cooled ever so slightly, I ventured outside and rambled along dusty streets past souvenir shops displaying blankets with Steelers and Patriots logos hanging beside garish masks. Piles of well-read mysteries captured my attention at Alma Libre bookstore, the best place on the coast to exchange beach reads. Locals were just beginning to settle down for dinner as I returned to my room to prepare for my excursion to the reef the next day.

The streaming sunlight I’d hoped for was nowhere in sight the next morning. I was the sole patron at the dive shop—apparently more sensible tourists were willing to wait for clearer conditions. But this was my only chance to get into the water and a few whitecaps wouldn’t stop me.

The dive master and I reached the reef quickly and jumped into the murky sea. My arms quickly grew weary as I swam with all my might, searching for at least one giant turtle by the reef. I saw a needleﬁsh, a lobster, and swarms of striped sergeant majors, but gave up after 15 minutes and signaled a strong desire to return to the boat. Instead, my guide frantically beckoned me forward. I glimpsed a dark form in the distance, then two ﬂippers and a beady head. Sure enough, a turtle was swimming right toward me. It seemed my good fortune had stuck around even in the most discouraging conditions. Buena suerte indeed.

Maribeth Mellin is the author of several books about Mexico. She is a recipient of  Mexico’s prestigious Pluma de Plata award for her ongoing coverage.