London calling: In search of nostalgia and surprise on a return trip

Only hours after arriving in London—my fourth visit to a city I claim to know so well I refer to it as “my first boyfriend”—I botched the English language. Famished after traveling across 8 time zones, I walked up to the hotel bar, glanced at the menu, and blurted out, “Can I get chips and guac?”

The bartender gave me a quizzical look. His eyes moved to where I was pointing. “You mean tortillas and guacamole?” he said in a crisp English accent. “Absolutely.”

London: always accommodating, like a trusted old friend who forgives your gaffes. Carrying on is what London does so well, and that’s what I’d come here to do, too: carry on, after a rough couple of years. I’d visited London as a college student, a bride-to-be, and a young mom. Now single after finalizing a divorce during the pandemic and facing an empty nest as my daughter prepares to start college in the fall, I chose to return to the place that gave me my first passport stamp.

The bar hummed with attractive couples who looked as though they’d stepped out of an ad for a dating app. Too jet-lagged for that scene, I returned to my room to enjoy comfort food in my pajamas. I was staying on Portobello Road, a street where I’d shopped for funky dresses nearly 30 years earlier. I looked out my window at a cold, gray November afternoon, but with hints of sunlight peeking through. It was as if the weather was unsure of its own mood.

I knew the West End sights well, and I planned to begin my visit here, exploring old haunts before venturing across town to the East End, an area I’d never explored, but whose restaurants, shops, and street art had been generating a lot of buzz. 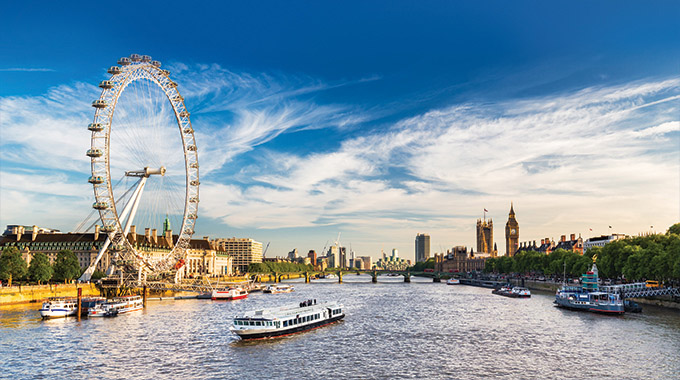 The River Thames, with the London Eye at left. | Photo by Daniel/stock.adobe.com

I had a date with an old friend: the London Eye, that towering observation wheel that offers one of the best vantage points to see the glass-and-metal skyline and to gauge how much the city had changed in recent years. Late one afternoon, I bundled up and took the long, scenic route there, riding a crowded Circle Line train to the base of Big Ben, then making my way on foot across the River Thames on the Westminster Bridge toward the Eye. Already nearly a quarter-century old, the Eye is a radiant beacon amid centuries of British architectural history. This would be my third time on it, but my first alone. 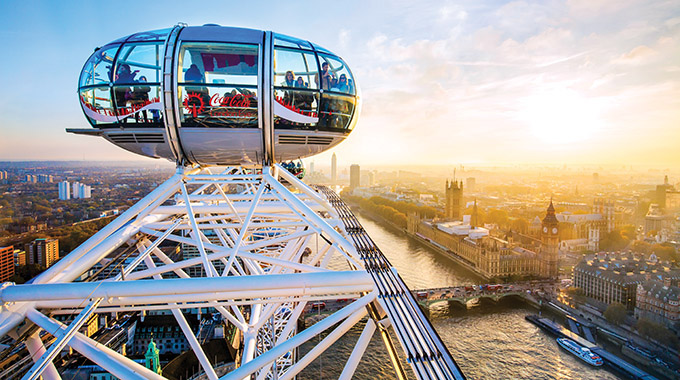 The London Eye looks down on the River Thames. | Photo by Jon Reid/visitlondon.com

I’d booked a sunset ride in advance and now found myself seated in a glass pod as the city lights flickered on and the car started to move. A single rotation takes half an hour. Rising above the Thames, I looked out at the Houses of Parliament, Westminster Abbey, Buckingham Palace, the dome of St. Paul’s Cathedral, Tower Bridge, and the Tate Modern. I’d seen these landmarks many times before, but the view never gets old, and seeing them again felt grounding. I studied the gray Thames down below and the lively South Bank at the base of the Eye. Nearby, I spotted the Golden Carousel, where I took my daughter for a ride when she was only 5. Every direction I looked triggered a memory. Riding solo felt strange at first, but I liked reflecting on my earlier visits without having to explain them to anyone. I saw cranes and scaffolding, too. Ever-evolving London. 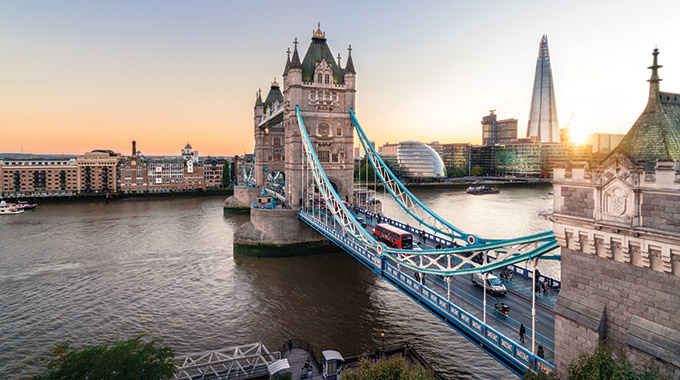 The London Bridge, with the Shard jutting skyward at right. | Photo by Antoine Buchet/visitlondon.com

I wanted to visit one more old West End friend before heading east. On a surprisingly sunny morning, I headed down 3 flights of creaky uneven stairs and onto cracked, cobblestone streets. I recognized London through my feet. Nothing was smooth or level, which was perfect. Lined with brick-and-mortar shops, Portobello Road was an ideal reentry to bric-a-brac England. I strolled past shops and stalls selling antique teapots, locally made cheese and sausage, prints of the queen, and even a place selling old ornate skeleton keys hailing from Indian palaces.

Farther down, I ambled past elegant townhouses painted in pretty pastels, so the buildings resembled exquisite macaron towers. I didn’t linger, though. I had lunch plans in Notting Hill.

If you spend any time in London, you should have a favorite pub, and mine is the Churchill Arms, which dates to 1750. The pub’s facade showcases serious flower power, with countless boxes and pots displaying a kaleidoscope of cascading blooms. I pushed past the heavy wooden door, and the pub appeared exactly as it had when I first visited decades ago: Classic dark wood dominated the interior, yet the place was redolent of peanut sauce, not the fried fish typical of most pubs. Food is memory, and I sat at one of the many wooden tables and ordered my favorite items: chicken pad thai and Earl Grey tea. The pad thai was as tasty as I’d remembered. I watched the lunch crowd pour in, then headed off to map out a part of London that was entirely new to me.

A renaissance across town

While the East End feels far, it’s only a 20-minute Tube ride away. The area had been the subject of recent splashy features in magazines. The neighborhood of Shoreditch, for example, was said to be bursting with creative energy, like a midcentury Greenwich Village. 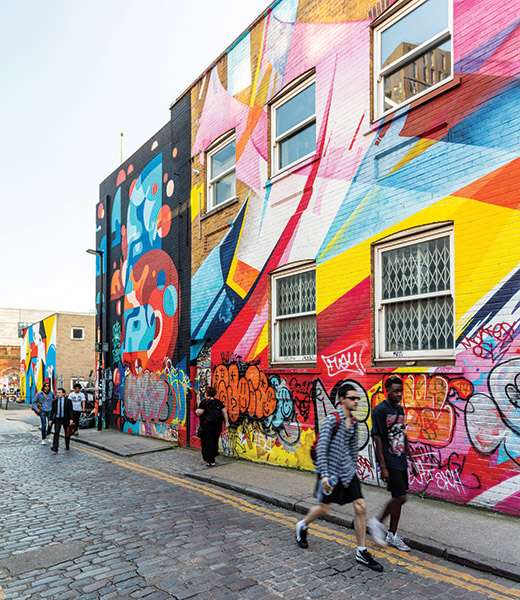 I found the streets around the Bethnal Green station to be a little grittier than the West End roads I’d been walking. I strolled past dark railway arches covered in graffiti to The Water House Project, a chic new restaurant from local star chef Gabriel Waterhouse. I’d heard his place offered a personalized dinner-party experience, and that it booked up early. I’d made a reservation 2 months before my trip.

I soon found myself inside the restaurant and in another world: Warm yellow lighting filled the high-ceilinged space, a massive floral display hung above the counter where cooks worked in the open, and the dining room was appointed with unpretentious wooden seats that made you feel as though you were relaxing at a friend’s apartment.

In fact, the restaurant felt like a very large, well-decorated living room, which shouldn’t have come as a surprise given that Waterhouse honed his style of cooking at, among other places, a supper club he ran out of his apartment. (He moved into this new space in September 2021.) The restaurant has a fixed-price, 9-course menu that changes monthly and reflects the seasons. Guests are seated and served at once, with Waterhouse and his team personally introducing each dish as it arrives. 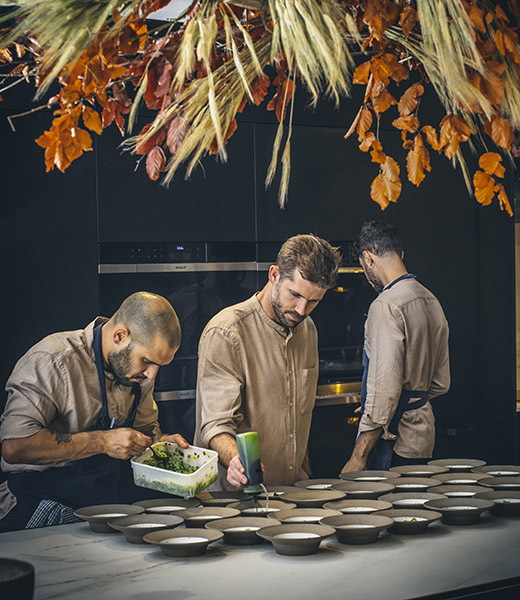 Waterhouse loves cooking with fish and has a penchant for skillfully integrating unexpected flavor combinations. Over more than 3 well-paced hours, I sampled mackerel, eel, duck, and hake.

I cleansed my palate with beetroot and buttermilk, and finished the meal with chocolates and parsnip ice cream. But it was the sweet corn tuile with raisin puree and trout roe, and an earthy mushroom puree with coffee, tarragon, and pumpkin that I would remember most. Raisin and roe? Mushroom and coffee? They were so delicious and unexpected that I almost applauded as I ate—as if I were at a theater enjoying a play. And although I was by myself, I felt recharged being there with the other diners, all of us seemingly wowed by each dish.

I met Waterhouse as he made the rounds that evening, greeting diners. “I live in East London and it’s where I wanted to have my space,” he told me. “People who visit East London have a more adventurous mind-set to try new things. Fine dining can be enjoyed in a relaxed environment that feels fun instead of stuffy.”

Blooming on the East End

After a few years of setbacks, lockdowns, and endings, I was hungry for more new experiences like The Water House Project that felt like beginnings. The East End has a growing reputation for innovation and imagination, and I wanted to see more examples of both. So, on another gray day, I braved a light rain to explore Bethnal Green’s Columbia Road Flower Market, held every Sunday and frequently packed with shoppers thanks to London’s enduring love of fresh blooms.

I continued on foot toward Shoreditch and Spitalfields, passing residential row houses and old brick buildings along the way. As I entered Shoreditch’s commercial district, I saw more murals than I could count. In fact, street art lined almost every block and ran the gamut from the provocative to the whimsical.

The edgy vibe in Spitalfields and across East London was relatively new, according to Emma Parker, founder of the tour company Coutours. I’d contacted her as I planned my trip and she told me she’d watched her working-class community evolve into a trendsetter.

“I remember when a good pizza restaurant opened at Spitalfields Market, 1 mile from my apartment, and I was overwhelmed with joy and excitement,” she said. “This was 1992. There were very few places of note in this very working-class part of town, but the East has always been an area of immigration. Our best food has been either ‘invented’ here or given to us by different cultures moving in over the years.”

Peckish from all the walking, I stopped to grab a bite at The Gun, a city tavern that mixes gastropub-style fare with tapas-style bites. The Gun can draw a classic pint of beer but specializes in cocktails (be sure to designate a driver if you plan to drink alcohol). Unsure if I wanted to feel up or down, I chose the vanilla espresso martini, which could’ve been drizzled on a pancake. The drink hit the spot on this brisk day. I opted out of the Sunday roast dinner and ordered a sweetcorn fritter topped with avocado cream and pickled onion. It turned out to be just the satisfying comfort food I craved. 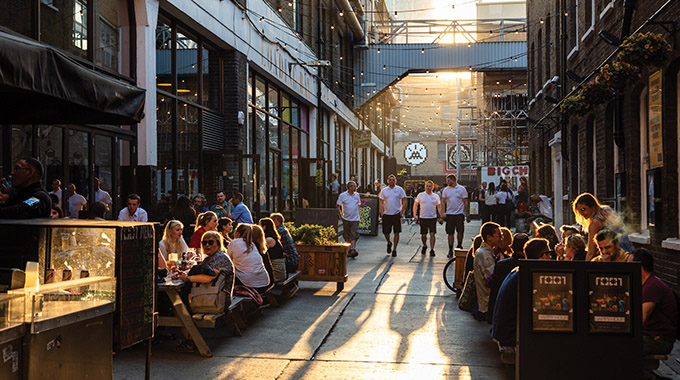 I walked off the calories at Spitalfields Market, where gourmet food trucks offer everything from doughnuts to smoked barbecue, and artisans peddle accessories, art, and fashion. I wished I had more time to browse.

Knowing I’d soon be flying home to California, I prolonged the return to my hotel and headed to the East End’s bustling Commercial Street. Black cabs inched by, cold rain hit the curb, church bells chimed, and the air smelled of coffee and fried food. I was in a new neighborhood, and yet this was exactly how London and I first met all those years ago—on foot, in a light rain.

Every time I’ve returned, I’ve felt revitalized. My life and the world around me may undergo upheaval and change, but London, I realized, would always have my back, no matter my age or my stage of life. It was as if London had been waiting for me all these years, just as I’d been waiting to return.

Katrina Woznicki has written for National Geographic Traveler, the Los Angeles Times, and the Washington Post.