Lowry’s atmospheric interior makes it a fine place to sit with a good book.

Two white-haired men watched me when my pint arrived, presumably to see if I would let the head settle before my first sip. Satisfied that I was giving my Guinness the respect it deserved—of course I waited for the pour to reach its full potential—the men turned back toward the sun.

With glasses of golden ale in front of them, they sat with their eyes closed, chatting and sipping. It was a sunny day in Dublin, and I felt lucky to find an open table outside Finnegan’s, a pub in the seaside village of Dalkey.

The Irish pub is an institution for good reason. Bartenders and regulars are generally quick-witted, hospitable, and inquisitive without being intrusive, so visitors can engage as little or as much as they’d like.

But not all Irish pubs are created equal. Finnegan’s has the warm glow of original light fittings, smooth mahogany, stained glass windows, and a fireplace that beckons, whether or not it’s drizzling outside.

It’s the kind of place that invites you to sink in and stay awhile, and once you leave, to feel a bit lighter. On that summer afternoon, I had everything I needed: a book in hand, a pint on the table, and the sun on my face. 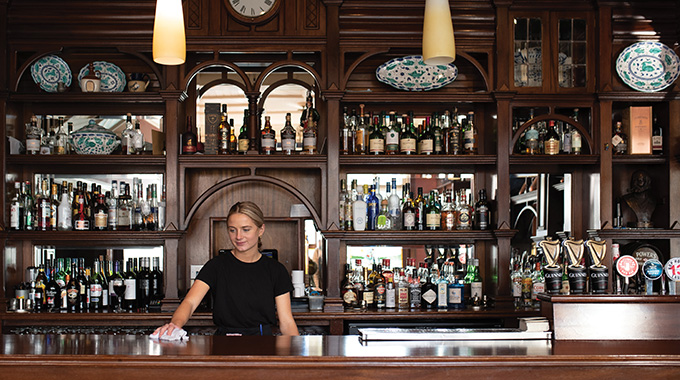 Behind the bar at Finnegan’s.

I’d come to Ireland in part to visit pubs and bookshops. In other countries, that might seem an odd pairing, but in Ireland, where Guinness and literature reign supreme, doing so makes perfect sense. Here, stout and prose are inextricably linked and offer a gateway to the best of Irish culture.

Put another way, the tradition of the seanchaí—the Irish storyteller or “bearer of old lore”—lives on in watering holes. After exploring the country for the last 15 years (and marrying a Dubliner), I’ve learned that what tempts me back year after year isn’t found in castles, museums, or religious sites, but in pubs and bookshops.

In Ireland, life is lived in the pub. This is where locals hang with regularity, and where travelers can go to immerse themselves in a community. Luckily, pubs aren’t hard to find.

As James Joyce famously wrote in his groundbreaking novel Ulysses (published in its entirety 100 years ago this February): “Good Puzzle would be cross Dublin without passing a pub.” I go to pubs for many reasons: to laugh, to eavesdrop, and to be alone with a book while in the company of others.

After the isolation of the COVID-19 pandemic, maybe you’re craving that kind of camaraderie, too. Ireland opened to U.S. travelers again this past summer. My husband and I jumped at the chance to return to his native country for an extended trip, vaccine cards and passenger locator forms (required for contact tracing) in tow. 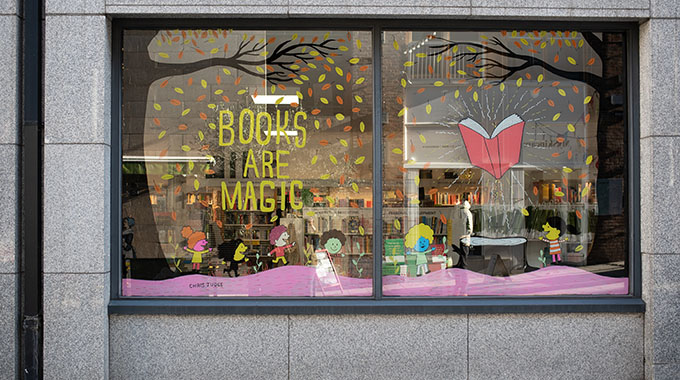 As I sipped my pint outside Finnegan’s, I sensed once again that I was being watched, though not by the pair of white-haired pint investigators this time. No, it was a tableful of people I’d seen a short while before just across the street in The Gutter Bookshop.

They’d been browsing the stacks and, like me, had bought books and crossed the road to Finnegan’s to crack the spines over a pint. They’d spotted the collection of short stories I’d just removed from my bag. We exchanged satisfied, conspiratorial looks. Surrounded by conversation and soft laughter, I dived into Claire Keegan’s stories and read through 75 pages in a haze of milky tea and Guinness.

Settling in with a book and a pint 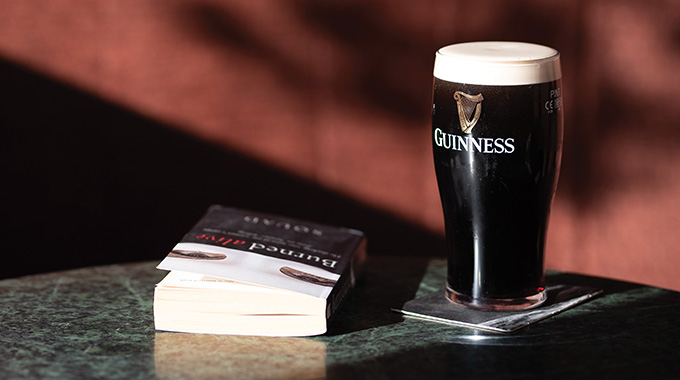 A glass of Guinness.

Later, I caught up with Alan Finnegan, who with his brother Donal runs Finnegan’s. “We’re a talking pub,” he said. “No music, no all-day TVs. We’re a place to talk or do the crossword or settle in with a book.”

Finnegan’s has been in Alan’s family since 1970, when his father, Dan Finnegan, now in his 90s, first came to Dalkey. At that time, people told Dan he was “mad” to take over a pub in Dalkey.

The village was at the outer edge of Dublin, they pointed out. It was the end of the line. “But maybe that’s what makes it so special,” Alan told me. “Every morning I go for a walk on the hill. I look out over the bay and it never fails to impress me. There’s this calm atmosphere people love.”

Finnegan’s is irresistible for the people-watching it affords, especially from the coveted outdoor tables. But on the day I visited, something else gave the afternoon a special feel: Life in Ireland was just starting to return to normal. During a strict COVID lockdown, residents were limited to travel within 2 kilometers of their home, and pubs remained closed for months (except for a brief opening period at Christmas).

Once pubs serving food could reopen, food-purchase minimums and time limits were government-mandated. Proof-of-vaccine passes were required for entry—and still are. Despite the restrictions, the Irish were eager to return to their local pub. “People were down here in a flash,” Alan said. “It’s the social aspect—the connection, the chat. That’s what people missed most.” 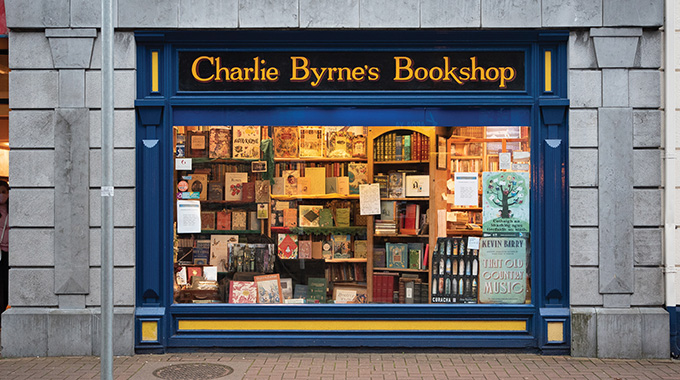 A few days later, I drove across the country to the west coast. Standing in the pedestrianized heart of Galway, the beloved university town, I couldn’t help but notice that almost every third person I passed on the sidewalk was carrying a brown paper bag with the same logo. On closer inspection, I saw the bags had come from my other Irish obsession: bookshops, or specifically, one shop in town. Instead of looking up the place on Google Maps, I decided to try a game: Could I follow the bags and find Charlie Byrne’s Bookshop without consulting my phone? A couple of wrong turns and several brown-bag clues later, I found myself at the front door.

Colorful volumes lined the window display. Inside, a handful of people were browsing, masks on. My routine in an Irish bookstore is to look for a section with a name like “Irish interest.” It has been in these lovingly curated bookcases that I’ve discovered rare travel books, new poetry collections, and small-press novels that might not be distributed abroad. 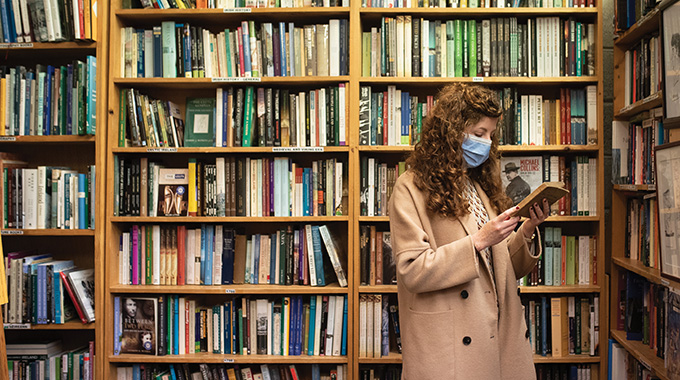 Among the stacks at Charlie Byrne's Bookshop.

From the Irish fiction section, I picked up a new release from debut Irish author Eimear Ryan. A decade prior, Eimear and I had taken a writing class together, and it was wonderful to see her novel, Holding Her Breath, on the shelf.

Later, I asked her about the unique link between pubs and Irish literary life. She recalled the many public readings she’d attended in pubs, including a recent event at Maureen’s, a tiny watering hole in Cork.

“I think there’s an intimacy to a reading in a pub,” she said. “Pubs are usually places of clamor and multiple conversations happening at once, so to have everyone quiet down to listen to one person reading feels pretty special.”

Sharing a drink at Caroll’s in Galway.

I left Charlie Byrne’s and walked 5 minutes to Carroll’s on Dominick Street, a great local pub, to meet a friend. Settling into a booth, I guiltily wished my friend might be on Irish time—and arrive a few minutes late—so I could get lost in the opening chapters of my new book. Happily, she was true to her Irish inner clock, and I made good headway in my reading.

A bookshop in every village 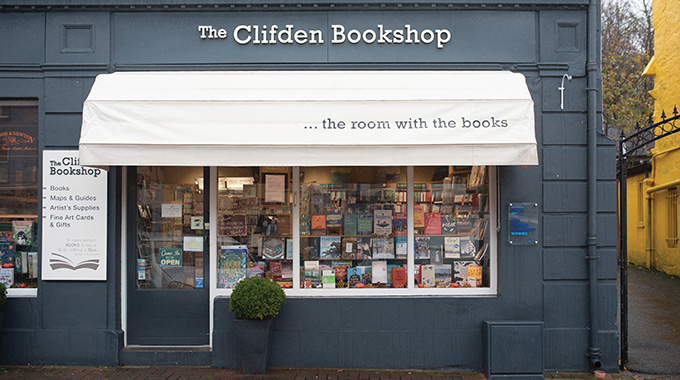 The Clifden Bookshop, which saw customers rush back after the lockdown ended.

In certain Irish circles, locals might argue that you haven’t seen the country’s best pubs and bookshops until you’ve experienced them in small towns in the countryside. I was about to test that theory.

The market town of Clifden is located in Connemara, at the far western tip of County Galway. The town is known for seafood restaurants and a main road lined with colorful shopfronts and window boxes with blooming flowers.

The Wild Atlantic Way coastal road passes right through town. In addition to its many pubs, Clifden is also home to a thriving independent bookshop. I heard that a pair of women—“real characters”—ran the store, and were reason enough to visit. I found the Clifden Bookshop on the cusp of celebrating 25 years in business.

“Plenty of people thought it would never work, but we proved them wrong,” co-owner Máire O’Halloran told me. She added, “Every village should have a bookshop.”

The Clifden is the kind of store where the owners get to know your reading preferences and guide you to titles you might like. That applies to both regular shoppers and newcomers.

“It’s in our genes to welcome strangers,” said O’Halloran, a native of County Kilkenny. “For so many of us, our forebears emigrated to the four corners of the Earth, and they needed to be welcomed where they went. So we don’t forget that each time the door to our shop opens.” 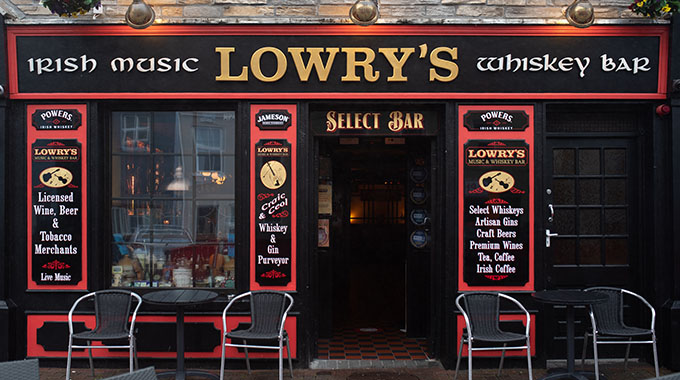 Afterward, I strolled to Lowry’s, a bar known for its whiskey and live music. I’d squeezed into the pub on earlier trips for late-night music sessions, watching a fiddler’s bow fly across strings.

But by day, Lowry’s is a lovely place to read. I found a seat and ordered a glass of whiskey. A woman reading the newspaper (and nursing a glass of gin) winked in approval as I opened a novel.

That afternoon, as I read, I overheard conversations involving all sorts of people—a fisherman, a taxi driver, a bickering couple, friends gathering for the first time since the pandemic began. They were all natural storytellers, I thought, attuned to amusing turns of phrase, all masters at building tension before delivering a good punchline or kicker. (As the Irish like to say, never let the truth get in the way of a good story.)

I left Lowry’s thinking that Irish literature owes a significant debt to the pub, this gathering place for storytelling, eavesdropping, and inspiration. How privileged we are as travelers to be able to stroll into these places, order a pint, and simply listen in.

Jessica Colley Clarke is a New York–based freelance writer. Her stories have appeared in the New York Times, Afar, and Saveur.

Dublin is a city of villages, and many have bookshops. Check out the Village Bookshop in Terenure (get coffee after at TwoFifty Square), Ulysses Rare Books in the city center (pint nearby at Kehoe’s Pub), The Company of Books in Ranelagh (settle in to Birchalls after), or Books Upstairs in the city center (don’t miss carrot cake in the upstairs café).

Both Finnegan’s and the Gutter Bookshop are core to village life in Dalkey. (Gutter also has a location in Temple Bar.) Finnegan’s hosts author readings. Dalkey hosts a book festival each June and a literary festival each October.

In Cork, author Eimear Ryan recommends Waterstones on Patrick Street, and the Mutton Lane Inn for a drink. In Galway, venture to Galway’s West End for a browse through Bell, Book and Candle and a drink at the Crane Bar next door. In Westport, County Mayo, don’t miss Tertulia Bookshop. Then grab a drink with a water view at the Towers Bar. The Clifden Bookshop owners Máire O’Halloran and Nicole Shanahan recommend a drink at the Station House Bar.

Ireland is welcoming vaccinated Americans and those with proof of COVID–19 recovery or a negative RT-PCR test result taken within 72 hours of arrival. Visitors were also required to complete a form for contact tracing.

Meanwhile, the U.S. State Department was urging Americans to avoid traveling to Ireland due to high levels of COVID-19 in the country. Check with your travel advisor for the latest updates. —J.C.C.