Spelling out the charms of the British isle of Guernsey

I was hiking a dirt pathway that snaked along the clifftop around Saint’s Bay on the British island of Guernsey. Wind rustled the brush, and some 200 feet below, the teal-blue ocean sent waves crashing against granite boulders. As I drank in the sunlit scene, I stopped to think: A book drew me here.

I’m not alone. Since its 2008 debut, The Guernsey Literary & Potato Peel Pie Society, by Mary Ann Shaffer and Annie Barrows, has drawn hundreds of visitors to this 25-square-mile island in the English Channel. Still more have come because of the 2018 Netflix movie. The book became the pathway through which I discovered Guernsey’s charms.

“People arrive here with the book in hand and want to see the places where Juliet Ashton, Dawsey Adams, and others lived,” said Gold Accredited tour guide Gill Girard, as she showed me around St. Peter Port, the island’s capital. They can’t do that because the book is fictional, written in the form of letters exchanged, and the characters’ homes aren’t actual buildings.

But the novel’s setting is real and reveals a lesser-known chapter of World War II history. On June 30, 1940, German troops landed by plane on Guernsey, which lies just 30 miles off the Normandy coast. Some 15,000 German troops occupied the island until May 9, 1945. Potato Peel Pie fans can make pilgrimages to locations described in the book, as I did.

“Though there are many who can tell a story better than I, I will tell you about our roast-pig dinner.” —In a letter from Dawsey Adams to Juliet Ashton

The novel’s pivotal event is set in St. Martin parish, near where I hiked. During the occupation, it was illegal for residents to own pigs. One character had hidden a pig and invited some neighbors to dine on the rare treat of meat after what Dawsey describes as “six months of turnips and a lump of gristle now and then.” One guest brought potato peel pie, a wartime substitute for real pie because butter, flour, and sugar were scarce. As the neighbors walked home, German patrol officers stopped them. A group member improvised the Guernsey Literary & Potato Peel Pie Society idea on the spot, offering a reason for their being out after the 9 p.m. curfew, and the soldiers let them pass. What began as a ruse became a lifeline to the group.

To get a sense of the terrain that the novel’s characters might have trod that night, visitors today can stroll the area’s public footpaths, which lead through meadows and past wildflowers.

Several main characters also lived in St. Martin. “People want to see the addresses,” said Girard. “We can’t identify the exact houses, of course, but the place names are accurate.” As I toured the parish, I saw several homes that could have served as models for those in the story. Some dated to the 17th or even 16th century, and were modernized and added on to; many were crafted from locally quarried granite in lovely tones of pink, rust, peat, orange, and way more than 50 shades of gray.

“As the mail boat lurched into the harbour, I saw St. Peter Port, rising up from the sea, with a church at the top like a cake decoration … .” —Juliet Ashton to Sidney Stark

On a boat ride back to Guernsey from the nearby island of Sark, I saw St. Peter Port from the sea. Although my view was different from what this character would have seen in the 1940s, it was enchanting, with sailboats in the harbor, pristinely kempt buildings decorating the hillsides, and a monument known as Victoria Tower at the top of a hill. (The Bailiwick of Guernsey in the Channel Islands includes the islands of Guernsey, Alderney, and Sark, as well as islets such as Herm.)

The port is where Juliet and Dawsey first meet in the story. (Of course, they fall in love.) It’s also where—in the book and in real life—Guernsey residents, fearing a Nazi invasion, evacuated most of the island’s children in June 1940, two weeks before German troops arrived. “The parents thought it would be for just a matter of months,” said Girard, noting that the children were sent to live with families in Scotland and England who had volunteered to care for them. The children didn’t return for five years.

In the book, several members of the literary society take Juliet around Guernsey when she comes to visit. I explored the island, too, entranced by fields of yellow flowers and pink orchids; herds of white-and-beige Guernsey cows lounging in emerald-green pastures; and earth-and-granite hedge banks, topped by gorse or blackthorn, in front of farmhouses.

“[The Germans] had rules for everything—do this, don’t do that … . Everyone was sickly from so little nourishment and bleak from wondering if it would ever end.” —Eben Ramsey to Juliet Ashton

The novel vividly captures the occupation experience. The conditions that the real Guernsey residents endured are chronicled in sites such as the German Occupation Museum, which has photographs and Nazi uniforms on display; and concrete bunkers and watch towers around the island. Most chilling to me was the German Underground Hospital, a 75,000-square-foot network of tunnels built into the rock. As I walked along the dark, dank passageways, once used to house munitions, the oppression the Guernsey islanders must have felt seemed palpable.

From fiction into fact

“We read books, talked books, argued over books and became dearer and dearer to one another.” —Amelia Maugery to Juliet Ashton

In the novel, once the characters returning from the pig roast had invented their literary society, they had to continue meeting—and reading books—to stay out of trouble. The books opened new worlds; people with scant literary background discovered Dickens, the Brontë sisters, and Shakespeare. Reading and discussing books provided companionship and sanity during a terrible time.

That thread throughout the novel inspired me in my journey. By allowing these fictional characters to lead me into the real Guernsey, I learned more than I could have imagined about compassion, resilience, and the power of the written word. 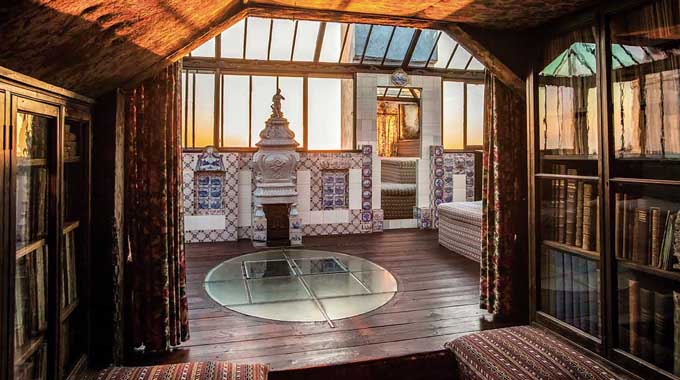 When in exile from France, Victor Hugo spent 15 years on Guernsey, where he built Hauteville House (pictured above). He designed the interiors, so visiting this mansion in St. Peter Port offers insights into his creativity. Most of the rooms are elaborately decorated. In one room, tapestries paper the walls and ceiling; in a rococo-style room, scarlet silk damask covers walls and chairs. By contrast, Hugo’s private office at the top of the house is simple. In a skylight-lit atelier, he wrote standing at a wooden desk, facing in the direction of his beloved France. Among other works he penned here, he completed Les Misérables. Typically open from April to September. Adult admission, about $12.

Guernsey fishermen’s sweaters were originally knit from oiled wool in a simple design that was the same front and back. (If you threw on your clothes in the dark of night, as fishermen do, it wouldn’t matter which side was in front.) Today’s sweaters come in various colors, styles, and fabrics. Prices start at about $100.

Between the seafood, which is among the freshest in the world, and the dairy products—from Guernsey cows, whose milk has a whopping 4.7 percent fat content—Guernsey is a fine place to dine. The butter and cream are decadently rich, and even ice cream cones from a seaside kiosk are culinary classics. I found these restaurants in St. Peter Port to be outstanding:

The scallops on my plate at Octopus were as large as tennis balls and still attached to their shells. Lightly grilled in lemon butter, they had an ethereal quality. “Richard King, a local diver in his 70s, dove down and got those today,” my server told me. About $3 per scallop. Hot seafood pots with crab and/or lobster, about $24–$60. 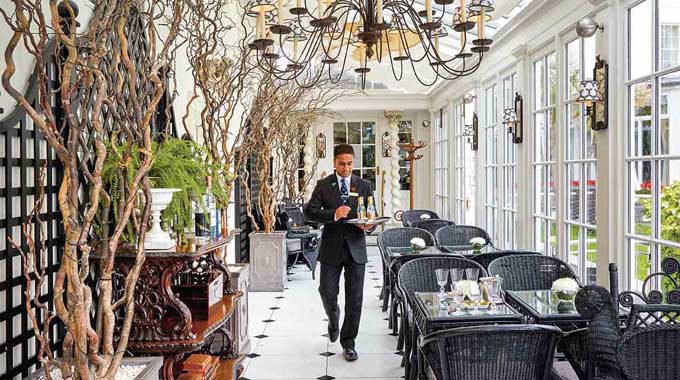 The Old Government House Hotel and Spa (pictured above), which dates to 1796 and once served as the lieutenant governor’s residence, melds a contemporary sensibility with design touches that pay homage to its heritage. In the central lounge, a massive painting of two hunting dogs hangs above a couch, and during my stay, a huge bouquet of white anthuriums took center stage. Food in the Brasserie restaurant included an oatmeal breakfast with cream so rich it bubbled on top. The staff knew my name from the second day, making me feel like a lieutenant governor, too. Rates start at about $227. theoghhotel.com.

More information is available at visitguernsey.com. A variety of island tours are offered, including a Potato Peel Pie tour.