A panoramic landscape of Raiatea, one of the Society Islands in French Polynesia. | Photo by NAPA / Alamy Stock Photo

A writer sets off to find the adventurous heart of the Polynesia.

The sun’s first rays touched the outlines of the mountains outside my window, and the whir of a boat engine broke the gentle silence. Aboard the catamaran sailboat Apetahi, its captain, the towering, tattooed Turo, lifted anchor. His coworker, Hinano, worked below decks in the kitchen, a fragrant tiare blossom tucked behind her ear, a ready smile and a cheery iaorana—the Tahitian equivalent of “aloha”—for sleepy passengers climbing up from their cabins. Living from the sea as her forebears have for a thousand years, Hinano was preparing a tender poisson cru from a fresh-caught tuna, seasoned lightly with just-squeezed coconut milk and a touch of lemon.

Today, we were headed Raiatea (pronounced “rah-ee-ah-TAY-ah”), home of Marae Taputapuatea, the most important precolonial temple of prayer in Polynesia. From New Zealand in the southwest, to Hawai‘i in the north, to the Marquesas in the northeast, people have converged on this spot for centuries with their offerings and petitions. Some still do. At this spiritual center of the Polynesian universe, at the foot of the sacred mountain overlooking the sea, I sought an answer to the question that brought me here.

French Polynesia’s more famous islands—Tahiti, with its ‘ukulele-playing airport greeters and grass-skirt stage shows; Bora-Bora and Moorea, with their luxurious resorts and star-studded guest lists—constitute the land of the perpetual honeymoon. Does anything remain of the raw, adventurous spirit of the original Polynesians?

I was, in a way, asking the same question that Paul Gauguin had asked when he came to these islands more than 100 years before to explore what remained of Polynesia’s ancient roots. The French artist came a century after the 1769 arrival of Captain James Cook, who was one of the first Europeans to make contact and whose visit set in motion a period of profound change. Gauguin was disappointed to see that Tahiti was “becoming completely French,” as he wrote to his wife soon after he arrived in 1891. “Little by little, all the ancient ways of doing things will disappear. Our missionaries have already brought a great deal of hypocrisy, and they are sweeping away part of the poetry.”

I hoped to find a different answer. I had set out from Papeete, French Polynesia’s teeming capital, to explore Raiatea and another isle, Huahine (“hoo-ah-HEE-nay”)—two of the country’s remote, lesser-visited places.

In the home of legends 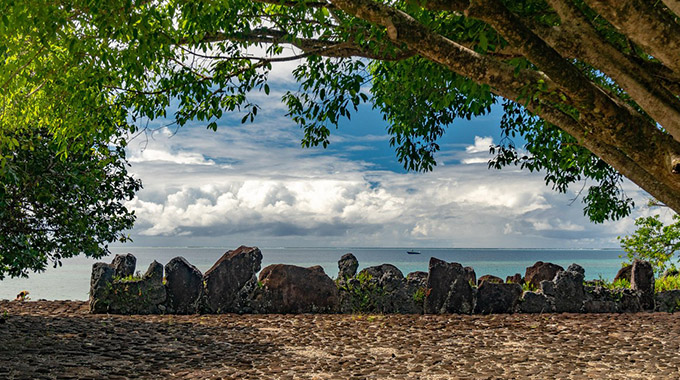 Ancient legends permeate Huahine’s green, mountainous terrain, and the largest concentration of archaeological sites in Polynesia dots its landscape. It’s actually two islands: As the story goes, the mischievous god Hiro smashed his massive canoe into the side of Huahine, breaking it in two.

Paul Atallah, an American who married a Polynesian and settled down here, took me on a tour that ended in Maeva, a village where archaeologists have discovered more than 70 marae (temples), leading the scientists to conclude that this village was home to an unusual concentration of power and designated as tapu—sacred, off-limits to the general populace. The word pops up frequently here, and I learned that it’s the origin of our English word “taboo.”

I walked along the waterfront, where several stone platforms edge the water; someone had adorned one with replica unu boards—wooden boards intricately carved with symbolic figures and geometric designs—inserted into the ground at the back of the marae.

“That’s a historical mistake,” said Paul. “The unu boards were only used in relation to human sacrifices; they wouldn’t have been placed at these small neighborhood marae.”

“It’s cool to bash the missionaries, and I use to be the best at it,” Paul said, as we made our way along a trail through the rain forest on what’s come to be known as the Maeva Marae Walk. “But I did more research. It all goes back to this myth that Tahiti was paradise, and the Europeans came and destroyed paradise. But it was never paradise. You had constant tribal warfare, you had infanticide. Today, instead of human sacrifice, there are antibiotics. Would you rather live in the islands before, or today?”

Paul’s practicality put things into perspective. “The old religions are very much a thing of the past,” he said. I acknowledged the need for change, but I felt deflated. I hadn’t wanted to find cannibalism and human sacrifice, obviously. But I’d wanted to sense the mana, a place’s mystical spiritual essence that all indigenous peoples call on. Nowadays, I had discovered, “Mana” is the name of a popular network of Wi-Fi hotspots in French Polynesia.

Paul led me up the hillside to his favorite marae, a moss-covered altar planted with a massive banyan tree. These banyans were once used in parts of Polynesia as grave trees, with the bodies of dignitaries buried among their roots, he explained. I recalled the words of Maori leader Te Rangi Hiroa, who made a 1929 pilgrimage to Taputapuatea and found it dismal and abandoned. “The dead could not speak to me . . . It was sad to the verge of tears,” he wrote. “Foreign weeds grew over the untended courtyard, and stones had fallen from the sacred altar of Taputapuatea. The gods had long ago departed.”

I turned from the altar and we made our way down the hill. Mana had not been forthcoming; perhaps, I thought, it was tapu. Or perhaps it was truly gone. I was headed to Taputapuatea myself, and I wondered if I’d find it as desolate as Te Rangi had nearly a century before.

Center of the universe 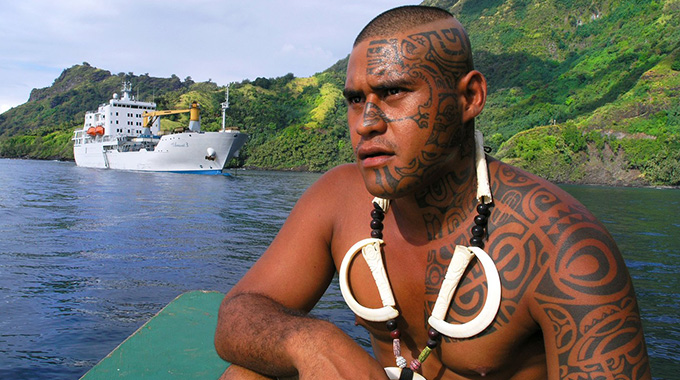 Like 70 percent of French Polynesians, a sailor on the Aranui is decorated with tattoos. | Photo by Melba Photo Agency / Alamy Stock Photo

The next day, four other passengers and I boarded the Apetahi, for the trip to Raiatea. The sailboat would also be our home for two days. I took a seat beside the captain, Turo, atop the craft and watched as he monitored an instrument panel full of dials.

My thoughts traveled across the ages to the master navigators who settled these islands, riding their double-hulled canoes and guided over thousands of miles by nothing but their celestial knowledge. Turo laughed ruefully when I commented on the contrast; his primary guide is his GPS device, but he learned to read the night skies from his father.

In his limited English and my more limited French, we talked about Polynesian traditions, which, he assured me, are experiencing a resurgence. “Ceremonies, festivals, and dances embody the old ways,” he said. “Young people are becoming more interested.”

People today, for example, practice widely the ancient art of the tattoo: An estimated 70 percent of French Polynesians carry a tattoo somewhere on their bodies. People also still follow the cycles of the moon to ensure successful fishing and planting, and they still come from miles around to leave offerings and conduct ceremonies at Marae Taputapuatea, our next day’s destination.

Making offerings in the rain

On Raiatea the following morning, as we prepared for our excursion, clouds gathered. By the time we arrived at the marae, it was pouring; after reading a few of the placards, my companions returned to the van. I was silently relieved, appreciating the privacy. Remembering the words of Antonio, the indigenous Huichol elder I had traveled with in Mexico the year before, I bowed my head. “You can’t just go to a new place and start walking around as if it’s nothing,” he’d admonished me. “You have to ask permission. And you have to leave an offering.”

Standing silently in the bone-soaking downpour before the giant platform made of volcanic rock, limestone, and coral, I saw that the marae appeared to be lovingly cared for. I took it all in: the raised ahu, or altar; the small collection of carvings and bowls; the wooden unu boards of varying heights and designs standing as ominous reminders that this site was dedicated to ‘Oro, the god of war, whose demand for blood had sealed the horrible fate of untold numbers. This is a place where one must tread with caution, I realized.

My mind reached out tentatively to whatever presence might reside in this place. Awkwardly, I murmured the words Antonio had taught me: “I’m asking permission to be here; I’m grateful for your acceptance. I respect and honor your presence in this place. I wish you no harm. I’ll pay my respects, and then I’ll be gone.”

Suddenly, as if on cue, the rain stopped. “Thank you,” I whispered. I reached inside my camera bag for something to use as an offering—a coin or a piece of chocolate would be adequate, Antonio had told me. I carefully picked my way across the rocky platform to the altar, which was covered with offerings: a tiny wooden canoe filled with stones and shells, a ceramic pot, a carved jade figurine. I left my coin on the altar, backed away and pulled out my camera for a few quick shots. Just as quickly, the clouds opened and the rain pelted down. “Okay!” I exclaimed. “I understand. I’m leaving now.”

Back on the Apetahi, I shared my experience with Turo, who threw his head back and let out a hearty laugh.

“What do you think it meant?” I asked.

His eyes searched the horizon a moment, the smile still on his lips. “The spirits are very . . . “ he searched for the right word. “Jealous,” he concluded, and said no more.

I didn’t quite understand what had happened, but I had my answer. The Polynesian culture is alive and thriving in places like Huahine and Raiatea. I had experienced the power of the marae. I had felt the mana.

Tracy L. Barnett is the former travel editor of the San Antonio Express-News and the Houston Chronicle.