Transcending the past on an Eastern Europe guided tour

The art-nouveau style Zagreb Art Museum was built for the 1896 Budapest Millennial Exhibition. | Photo by Pixabay 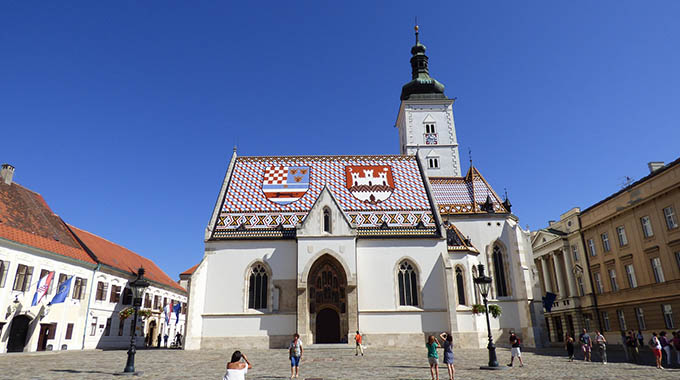 Zagreb, Croatia, has seen its share of breakups. So its Museum of Broken Relationships, a modern collection of mementos and symbols donated by those who have gone through painful separations from loved ones, seemed an appropriate place to start this trip.

The museum is located in the upper part of this northwest Croatia city and is within walking distance of the historic train station and just a block or so from Zagreb’s 13th-century stone gate. Items in the museum include a wedding dress, a checkbook, a Magic 8 Ball, a Champagne cork, a court summons, a three-volume set of writings by Proust, a stun gun, an unopened letter, and an ax. The ax was donated by a man who used it to destroy his girlfriend’s furniture after he discovered she had cheated on him.

Even the café next door is in on the act. The sign outside reads: "We serve beer as cold as your ex’s heart."

Visiting this section of Zagreb was a perfect prelude to the next two weeks of touring Croatia, Bosnia and Herzegovina, and Montenegro. The area is a mix of modern and ancient, beautiful and tragic, simple and sophisticated. The tour, conducted by Alexander and Roberts, skillfully combined the area’s history, culture, and natural beauty.

A tour of stunning complexity

This part of Europe has been conquered, conquered again, and again and again, all the way back to the eighth century. In 1946, after World War II ended, these countries became part of a collection of six republics under the national name Yugoslavia. But after the 1980 death of its communist leader, Josip Broz Tito, the region descended into a brutal ethnic and religious war that lasted into the late 1990s.

Every day, we saw reflections of the history of the Balkans, the countries of Europe’s Balkan Peninsula. On this tour, our group of 15 walked 5 to 7 miles a day, and each day seemed to span more than 1,000 years. We daily saw glimpses of the region’s future—new roads, vineyards, restoration of its culture, and modernization efforts in a desire to be embraced by the European Union.

We visited Eastern Orthodox and Roman Catholic cathedrals and Muslim mosques. One day, we walked along Croatia’s Plitvice Lakes, which are separated by natural travertine dams; each lake is fed by waterfalls from the lake above it. Another day, we toured the Palace of Diocletian and its Temple of Jupiter in the seaside city of Split. There, five men singing Croatian folk music a cappella in a stone rotunda brought us to a complete stop as the music soared into the past. Our tour guides took us to places most visitors don’t see, and in each area, we interacted with the people who lived there.

In Njeguši, Montenegro, not far from the coastal jewel of Kotor, we met a family who has been in the meat and cheese business since the 1850s. They served us prosciutto and sausage that they’d cured, along with their own cheese, tomatoes, and their wine made from honey. They took us into the smokehouse next door, where they showed us how they dry, smoke, and cure the meat, as the sausages hung from the ceiling like stalactites in an ancient cave.

Also in Montenegro, we had the best food experience on the same day we had the most astonishing visual experience. We loaded into Jeeps and headed into Durmitor National Park, a UNESCO World Heritage site. After two hours of switchbacks on unpaved paths high into the mountain, we stopped for a meal where the road ended at the edge of the Susica Canyon. An open wood fire awaited us, along with a lengthy picnic table and a crew of workers setting out chicken, veal, sausages, bacon, roasted vegetables, fresh tomatoes and cucumbers, potatoes, pastries, and blueberry juice, all made from locally grown ingredients and ready to eat. This was the best meal I’ve had in my entire life.

Part of the magic was the setting—mountains and canyons like those in Switzerland surrounded us; the rivers and lakes were an aqua that exists on no artist’s palette. Part of it was the service—friendly local growers and cooks took great delight in providing a perfect meal. Mostly it was the food itself. The meat was tender and juicy, coming right from the open fire; the vegetables exploded with flavor that comes only from being picked fresh that day; the bread was dense and still warm. I can’t fathom the number of blueberries that had to be crushed to make the juice.

“If God created a more beautiful place than this, he kept it for himself,” said Jim Pettey, a doctor from Kentucky, as we ate. 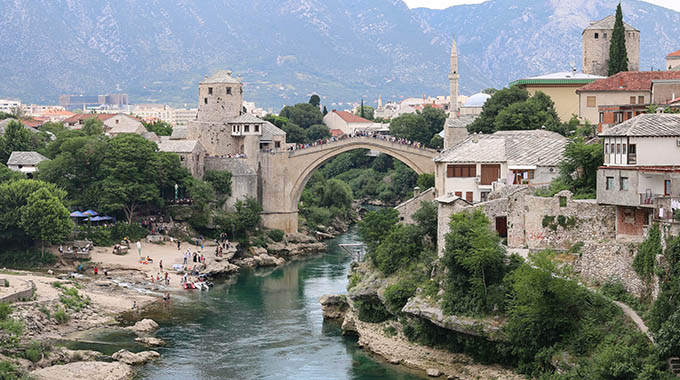 The Stari Most bridge in Mostar, Bosnia, an example of Ottoman Turkish architecture, was destroyed in the Bosnian War and later rebuilt. | Marcel Prueske / Pixabay

In Mostar, Bosnia, for example, a few steps from where divers entertain crowds by soaring off the 79-foot Stari Most bridge into the river below, we visited a café where the owner demonstrated the finer points of coffee. The Turkish influence was evident in the bridge design and the espresso. Both were bold and impressive. The bridge connects Mostar’s modern section to its old city, but it is so much more than a bridge. Its arch over the Neretva River practically brags. The stone is so white, the angle of the arch (just one across the entire river) is so severe, and the river is so blue that the landmark has probably caused more than one aspiring bridge-builder to give up and change careers. Similarly, the espresso had such strong flavor (and kick) that I have hesitated to order coffee in restaurants since returning to the United States.

The tour had sobering moments, too. In Sarajevo, evidence of the 1990s conflict with the Serbs was still visible; shell and bullet pocks remain on building facades throughout the city. A memorial to the Bosnian resistance includes a video screening room where footage taken with handheld cameras shows scenes from the nearly four-year siege that killed more than 11,000 people. We crouched and trudged through the part of the tunnel that residents used to survive and connect with one another in the city.

We went to the bridge near where, in 1914, a Bosnian Serb named Gavrilo Princip assassinated Franz Ferdinand, the archduke of Austria, an act that precipitated World War I.

Next to the bridge is the entrance to Old Town, where the Turkish influence from the 13th century dominates. Just outside Old Town are buildings and influences from Austria. In one neighborhood, one can visit Jewish, Eastern Orthodox, Catholic, and Muslim places of worship. Within a short walk is a street lined with cafés and stores like those found in any major city.

Throughout the Balkan countries, visitors can see both the past and the future. Recently, this part of Europe has been attracting refugees who want to pass through to Northern Europe, a development that will help shape its destiny. By embracing its history, the region is inventing its future. It is trying to mend its broken relationships.

The area’s reinvention struck me in a singular moment in Zagreb. In the main city square stands a statue of a man on a horse. The man is pointing his sword very forcefully, and his horse looks just as serious. The man is Josip Jelacic, leader of Croatia in the 1800s. He stood for the nation’s independence and autonomy, and the statue commemorates his 1848 invasion of Hungary. When it was erected in 1866, horse and rider faced north, toward Hungary.

When the area became part of communist Yugoslavia in the 1940s, leaders ordered the statue to be torn down; they saw any symbol of independence as a threat. To keep the statue from being destroyed, Gliptoteka Gallery curator Anton Bauer dismantled it and kept it in the gallery cellar. When Croatia became independent again in 1991, the pieces were brought out, reassembled, and returned to the main square.

This time, however, the resurrected Jelacic is pointing his sword and his horse south—significant not so much because of the new compass heading, but indicative of the country’s current progressive direction of thought.

Good move, Josip, I thought. I like where you’re headed.

Dean Nelson directs the journalism program at Point Loma Nazarene University in San Diego and directs the campus’s annual Writer’s Symposium by the Sea. He has authored several books, including God Hides in Plain Sight.