In preparing for the eighth annual Westways photo contest, we wondered to what extent folks had ventured forth during a year unlike any other. So we stretched the eligibility period—just this once!—to allow for entries that were photographed in the “Before Times.”

Some of our entrants raided their vaults, but, judging from the unprecedented number of last-minute entries (combined with a new post–July 4 deadline), others made their memories much more recently. No matter when these images were taken, they are part of another timeless collection.

We thank everyone who entered and congratulate those who won the prizes and  whose whose work appears below.

By Wayne Angeloty, a 33-year AAA member from Pismo Beach, California. Taken with a Nikon 3400 DSLR. 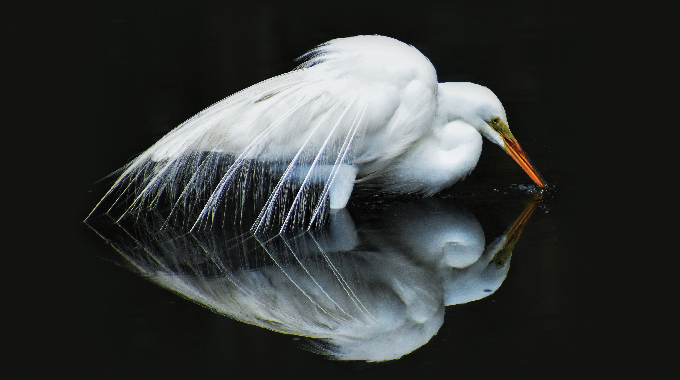 “This is a special image because [in May 2021] this was the only bird I spotted in an estuary at the Sweet Springs Nature Preserve in Los Osos. The great egret first got my attention as he stood, with matted feathers, about 4 feet tall and a football field away. He took off in my direction and landed in a small, dark pond close to my wife, Holly, and our friends. I slowly approached, and the egret seemed unfazed by the foot traffic and my continual but silent shooting. The pose, the soft reflections, and the onyx-mirrored surface reminded me of an ancient brush painting.” 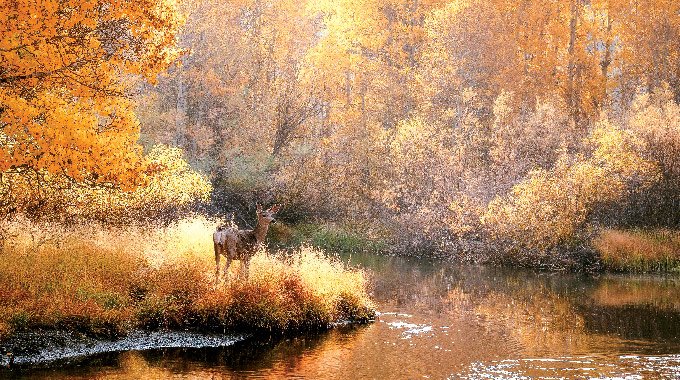 “My wife, Jessica, and I have a running joke: Whenever I ask her if a photo I’ve taken is any good, she furrows her brow and remarks, ‘It would be better with a deer in it.’ So it almost felt too good to be true when, as I was framing this [October 2020] photo of Rush Creek [in the June Lake Loop], a deer emerged from the brush next to me and meandered across the water to this spot on the other side. It stepped into the light and peered into the distance just long enough for me to snap this shot.” 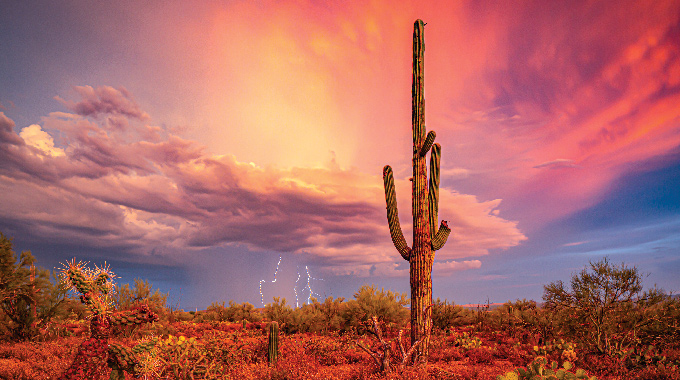 “Knowing that the monsoon season brings lightning to the area, I traveled solo to Tucson, Arizona, [in August 2019] for a week’s stay to visit Saguaro National Park and other area attractions, including the Pima Air and Space Museum and Mission San Xavier del Bac. I captured this image on the way to the park, only three hours after arriving in Tucson. Six days and 3,000 images later, this image remains my favorite.” 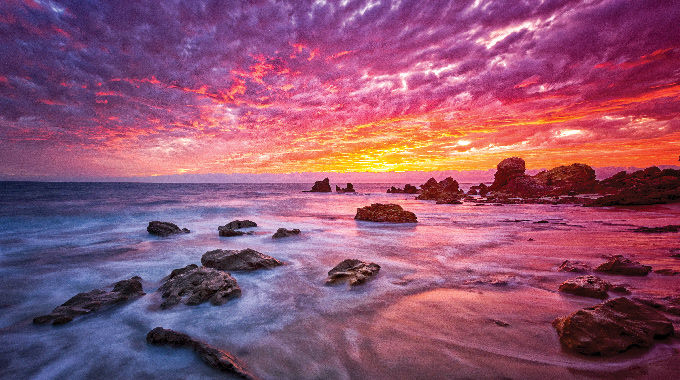 “I’m in love with California’s West Coast, especially Orange County’s beaches. Capturing sunsets is my quick getaway after a busy workweek. I had been envisioning this shot and frequently visited Corona del Mar State Beach to wait for the right conditions. I had already made several attempts at a sunset, but Mother Nature did not cooperate. On this [November 2019] day, with a forecast for stormy and windy weather and the right tides, I packed up my gear to prepare for the shot, and everything aligned. I am ecstatic that I could capture the moment and share this beautiful seascape sunset.”

Fifth prize: Welcome to the Rainforest

“After more than a year of cabin fever in Mission Viejo during the pandemic, my wife, Linda, and I decided to get away from it all [in May 2021] to experience the rain forest in Washington’s Olympic National Park. The first path we took had this arch that felt like a natural entrance to the park. Looking through the arch, I saw that the path in the distance was well lit and inviting. Inside was otherworldly: lots of moss on trees and lush plants everywhere, almost like you could see a dinosaur walk though at any moment. Incredible!” 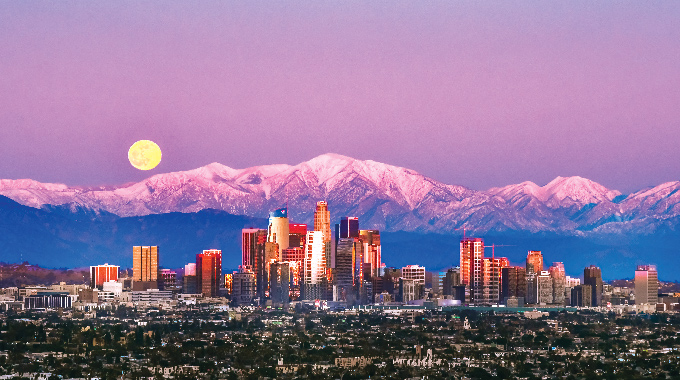 “In late December 2020, a winter storm brought fresh snow to Southern California, covering the San Gabriel Mountains. The next day, the winds blew the storm clouds out, leaving clear skies. I perched on a hilltop at the Kenneth Hahn State Recreation Area with views of downtown Los Angeles and waited for the sun to set and the year’s last full moon to rise.” 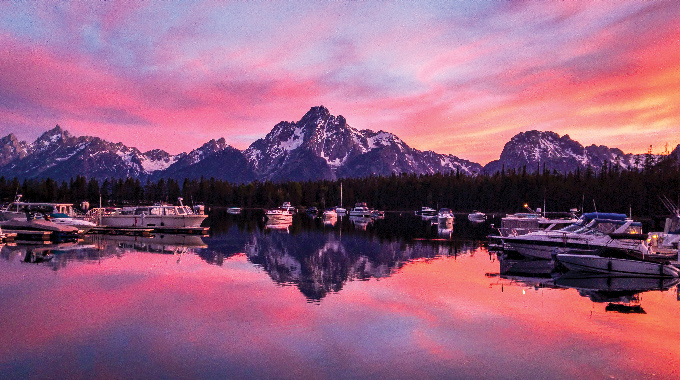 “This photo was taken in June [2021] during a two-week family trip that spanned eight states, five national parks, three national monuments, and three state parks. The trip started by celebrating the 50th anniversary of my wife’s parents and ended with my mom’s 75th birthday in Grand Teton National Park. I snapped this shot on my phone when I went to get ice at the general store. I wished I had had this type of sky a day later when I went out with my camera.” 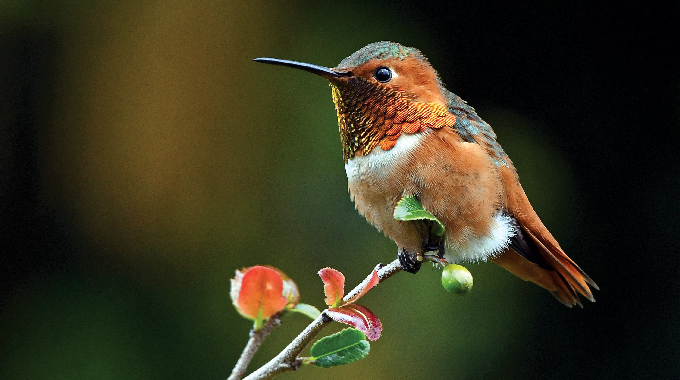 “I took this photo at the Fullerton Arboretum just before it closed due to COVID [in March 2020]. This little guy always returns to the same perch. It was just a matter of time until he came back, so I chose a nice background and shot away.”

“This was a cold, clear [March 2020] morning at the Ventura Harbor Ecological Reserve, with very little wind. The water surface was glassy smooth and reflected the bird’s image perfectly. I happened to notice several of these birds taking turns flying across the pond and plunging their beaks into the water when their prey came close enough to the surface.” 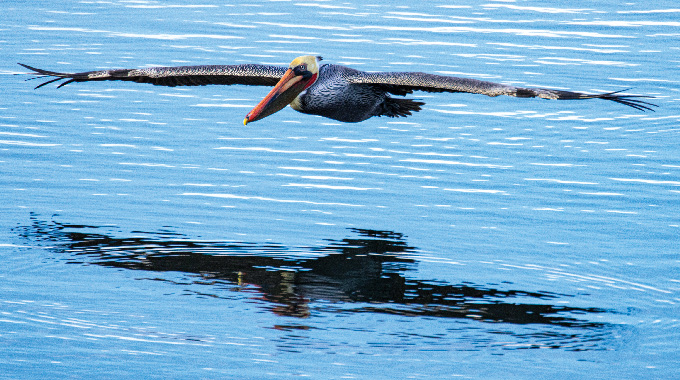 “One Saturday morning [in December 2020], I got up early to go for a walk and take some pictures at the Bolsa Chica Ecological Reserve. I arrived just as the sun was coming up. It was so peaceful, and I was able to observe many animals, ranging from ducks to ospreys to pelicans. This pelican came cruising just above the water surface, and it looked so majestic.” 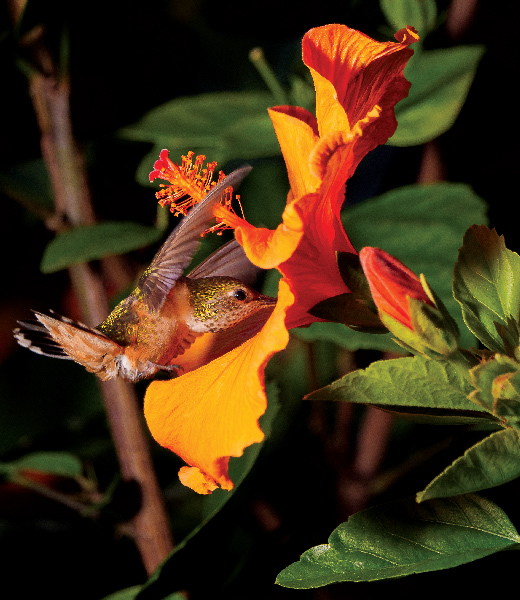 The Hummingbird and the Hibiscus by Abraham Ross, a 7-year AAA member from Beverly Hills, California; Instagram: @avichiban. Taken with a Panasonic DC-GH5.

“The coronavirus lockdown was visceral. It was easy to forget that little things still mattered, that the seasons would change, and that the flowers still bloomed. I had been conceptualizing this backyard shoot for a while but never made the time to follow through. I had a few near misses, a few bad misses, and spent a lot of time staring into empty space. No big deal. I had all the time in the world, and watching hummingbirds in Beverly Hills [in March 2020] was better than staring at a screen waiting for more bad news.”

“The Eureka Dunes in Death Valley National Park are California’s highest sand dunes, reaching more than 500 feet into the sky. During my first visit to the dunes (and my fourth visit to Death Valley) on a cold February [2021] morning, I found my spot on the mud-cracked playa and waited for the light to illuminate the sand dune and provide the flow of time I sought.” 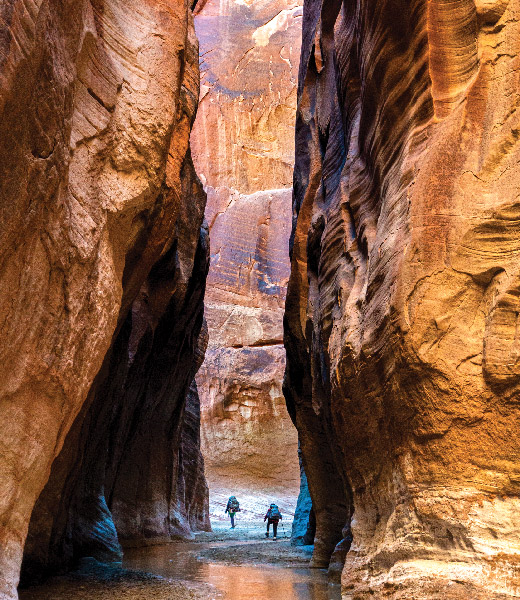 Yellow and Blues in the Paria by Jeremy Boggs, a 15-year AAA member from Van Nuys, California; Instagram: @adventurela. Taken with a Sony RX100iv.

“A backpacking trip [in October 2020] to Utah’s tall and colorful slot canyons was on our bucket list, and we had an absolute blast sharing the experience with our close friends. The cold waters of the Paria River and the deep, twisting slots of Buckskin Gulch were like nothing we had ever experienced. Get out and see this beautiful land.” 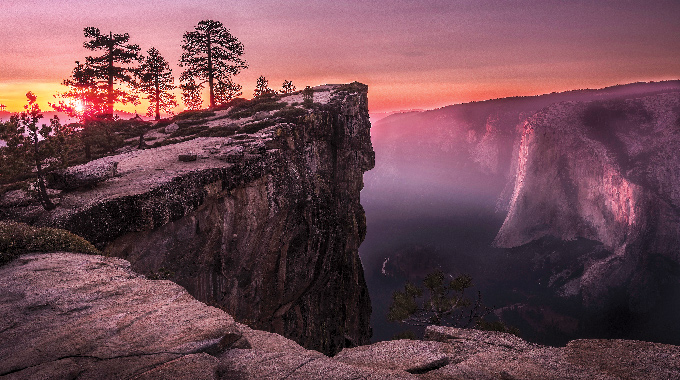 The Edge by Trent Kanemaki, a 55-year AAA member from Fullerton, California. Taken with a Sony a7r III.

“This sunset capture is at Yosemite National Park’s Taft Point during the final stages of the devastating Creek Fire [in October 2020]. Although the park was open, air quality was relatively poor from ash pollution, making photography challenging. Despite the haze in the sky, my wife and I had a wonderful time as this was our first vacation and extended time outside of the house since the beginning of the pandemic.” 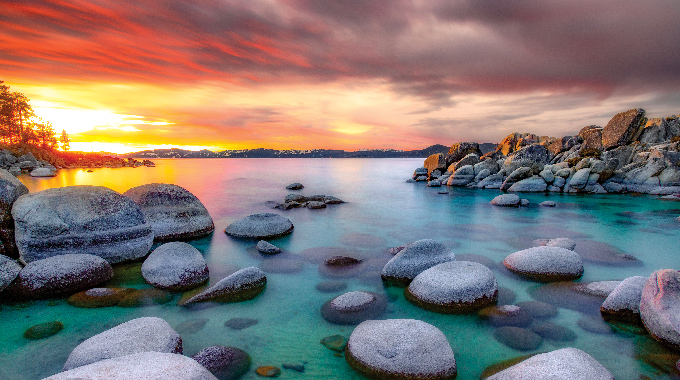 “As soon as my dad and I arrived at [Lake Tahoe’s] Sand Harbor [in March 2020], I started speed walking around looking for a spot to shoot—I had never been there before. I snapped a few photos at another spot, but the light just wasn’t right. Then I found this small cove with perfect rocks for my photo. Dad helped me up onto a tall rock, and I set up for the shoot. The clouds were initially thick and gray, but about an hour later, the sun broke through and the sky lit up.”

First prize is four nights’ stay for two in an ocean-view room with $500 resort credit at Hilton Hawaiian Village Waikiki Beach Resort; round-trip coach air travel for two to O‘ahu on Alaska Airlines; a private Island Tour for two from Blue Hawaii Photo Tours; a private Get to Know Kailua guided electric bike tour for two from Pedego Kailua; a five-day car rental on O‘ahu from Hertz; a courtesy week pass from The Parking Spot; dinner for two at Merriman’s Honolulu; and a $50 gas card from Aloha Petroleum.

Second prize is round-trip coach air travel for two to Portland, Oregon, on Alaska Airlines; three nights for two at the winner’s choice of local Hyatt properties; two nine-course dinners with pairings at Quaintrelle; an electric bike rental for two from Pedego Portland; entry for two to some of Portland’s most popular attractions from TravelPortland.com; and a one-week airport parking pass.

Honorable-mention winners each receive a one-year Automobile Club of Southern California membership with Classic benefits; a one-year individual membership at the Museum of Photographic Arts; and an Ultimate Movie Pack from Regal. Honorable mentions are presented in no particular order.

See the winning images of the 2020 Westways Photo Contest Winners.