AAA members prove that the tri-state region of Maine, New Hampshire, and Vermont is fertile ground for photographic beauty.

Although the fourth Northern New England Journey Photo Contest opened its subject parameters to all 50 states, only one of the finalists captured a location from outside of Maine, New Hampshire, and Vermont. If that number increases in the future, great. If not, it doesn’t matter: Our members proved once again that there’s more than enough beauty in the tri-state region to operate a fine competition, putting our judges to the traditional test. Thanks to everyone who entered, and congratulations to those whose work appears on the following pages. 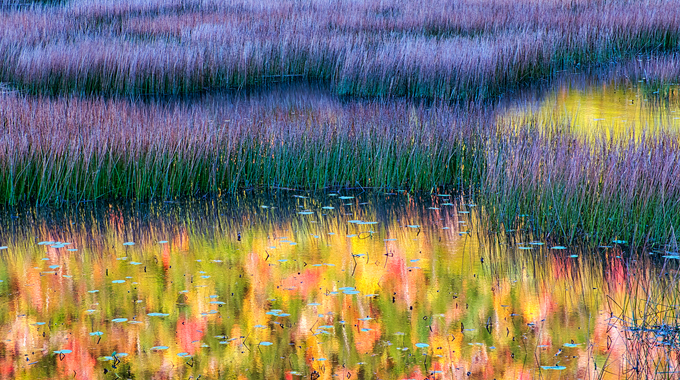 "I’m a 75-year-old retired academic physician who has been an ardent photo hobbyist since childhood.  Although I’ve had other photos published, this is only the second time I’ve received a prize for one; Billy the Goat, captured at the Bronx Zoo, won an honorable mention from Junior Natural History Magazine in 1950. This photo occurred at the last stop on a five-day Acadia National Park photo workshop led by nature and landscape photographer Colleen Miniuk-Sperry. I had cajoled my Bowdoin College Class of 1964 roommate, David Cohen, to join me. The Tarn is a pond in a glacially carved valley between Dorr and Cadillac mountains, about 3 miles south of Bar Harbor, Maine, on Mount Desert Island. Midmorning sun had risen sufficiently to light the water and cause reflections of the fall foliage as well as the rich color in adjacent reeds.” Taken with FujiFilm X-T2.

"Since my retirement in 2016, I have enjoyed traveling around the country to take scenic and wildlife photos with my college friend Chuck Maranhas, a consummate photographer, and my dog, an Australian shepherd named Gem. The A.M. Foster Covered Bridge spans a small pond on a hilltop in Cabot Plains, Vermont. The elevation, combined with being surrounded on all sides by very large, wide-open fields with no power lines and limited traffic, yields breathtaking 360-degree views of Vermont’s Green Mountains and New York’s Adirondacks, resulting in spectacular shots of sunsets, sunrises, and the moon or night sky. I created this image by merging two photographs: one focused on the bright sunset, the other on the darker foreground.” Taken with a Canon EOS 6D. 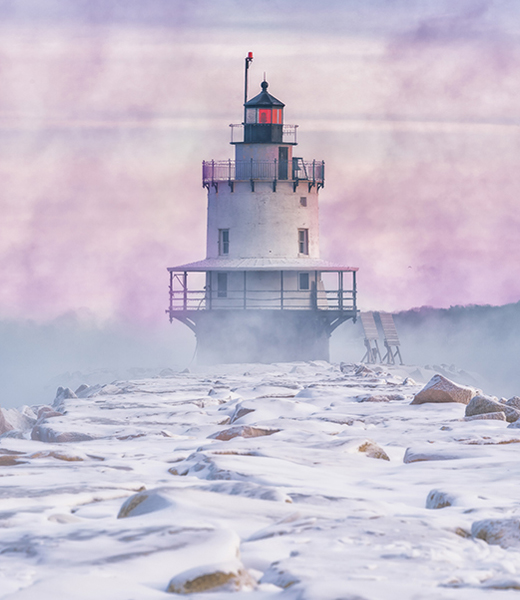 "This was the first time I’ve ever had the opportunity to photograph sea smoke since  jumping into the world of landscape photography. When my friend and I arrived at the frigid Spring Point Breakwater in South Portland, it was between minus 10 degrees and minus 15 degrees with wind. Although both of us were horribly unprepared for this level of cold, we stuck it out and waited for a break in the smoke to see the lighthouse.” Taken with a Nikon D810. "I have visited Nubble Lighthouse [in York, Maine] many times, but never early in the morning. I thought it would look nice under the stars." Taken with a Canon EOS 6D.

"A friend of ours recommended that we visit Sleepy Hollow Farm in Woodstock, Vermont, an icon of fall foliage in Vermont.” Taken with a Canon EOS 5D Mark III The photographer in the picture was standing right in the spot where I needed to be to get a shot of the sunrise and the [Pemaquid Point] Lighthouse.” Taken with a Fujifilm X-Pro1. "After a storm brought several inches [of snow] overnight, we headed out to photograph Portland Head Light [in Cape Elizabeth, Maine].” Taken with a Sony a7R II.

"This is a view overlooking Lake Champlain’s Burlington Bay and the partially obscured mountains of upstate New York." Taken with a Panasonic Lumix DMC-ZS50. "I dropped my neighbors off at the airport early one morning and took my camera, hoping for a good sunrise photo.” Taken with a Nikon D750. "I took this at 6:41 a.m. from the dock on Lower Suncook Lake [in Barnstead, New Hampshire]. I have been coming here for 64 years, and this view never gets old.” Taken with a Nikon Coolpix L830.

"While on vacation, my wife and I found Kraft Azalea Park, a small public garden in Winter Park, Florida.” Taken with a Nikon D7000.