Meow Wolf is one of the New Mexico United’s jersey partners.

On a balmy June evening in Albuquerque, as fans watch the New Mexico United soccer team battle Austin Bold FC, the game clock hits 19:12, which can only mean one thing: Magic Minute. Nearly 10,000 spectators jump up from their seats. Screaming. Clapping. Stomping their feet. Barely pausing to catch a breath. The uproar lasts from 19:12—signifying the year that New Mexico was accepted into the United States—to 20:18, indicating the year that New Mexico United was founded. 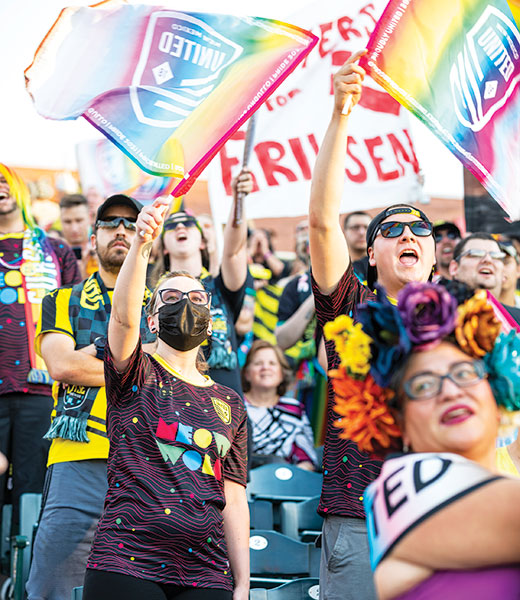 It’s a ritual that plays out at every home game. The crowd is usually a sea of black and yellow, but tonight, miniature rainbow United flags also speckle the stadium. It’s Pride Night at Isotopes Park, and even with social distancing measures in place, the rows are awash in color and sound. Team pride shines brighter than ever, in more ways than one.

Welcome to the world of New Mexico soccer. In 2018, when Peter Trevisani and his ownership group announced that the name of a new Albuquerque-based soccer club would be New Mexico United, one could forgive the soccer fanatics who rolled their eyes at the cliché. As international soccer began to make inroads in the U.S. in the 1990s, Manchester United was one of the best-known teams. Four of the 20 teams in England’s Premier League carry the United moniker, with five more in the two divisions beneath. In Major League Soccer, America’s top division, three teams are called United (Washington, D.C.; Atlanta; and Minnesota). 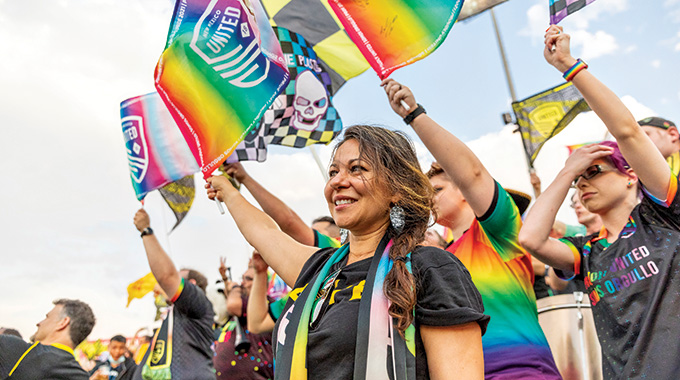 Now three years into its existence, New Mexico United has gone from an expansion soccer team to a community partner, a voice for equality, and, it turns out, a squad with legitimate title aspirations in the USL Championship. America’s second-division soccer league and one of five U.S. soccer leagues, the USL Championship consists of more than 30 clubs in the United States and Canada. Fans from around the state, whether at home, at watch parties, or at Rio Grande Credit Union Field at Isotopes Park (nicknamed The Lab), have made the team New Mexico’s hottest sporting entity. 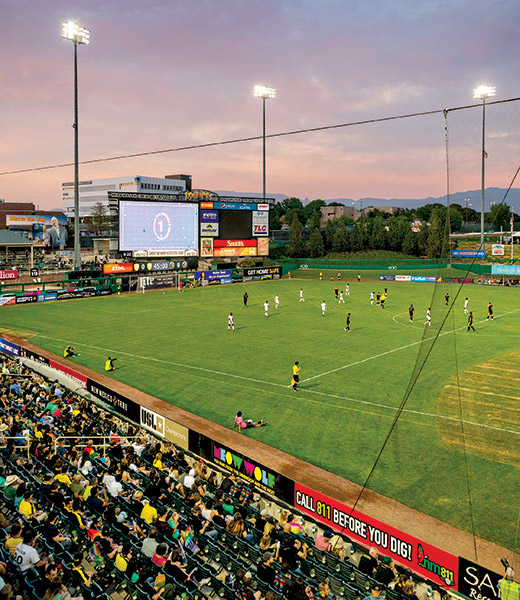 Players on the soccer pitch at Isotopes Park.

The team’s official flag features the United shield, along with the name of every city, town, and pueblo in New Mexico. Head Coach Troy Lesesne holds training sessions for New Mexican youth players, and The Curse New Mexico, the club’s independent supporters group, which doubles as a community organization, hosts watch parties in Albuquerque and well beyond. Jake Gutierrez, president of The Curse, says that though the squad is centered in Albuquerque, the team and the supporters group reach out to every corner of the state and say, “It’s not Albuquerque United; it’s New Mexico United. We want you here.” 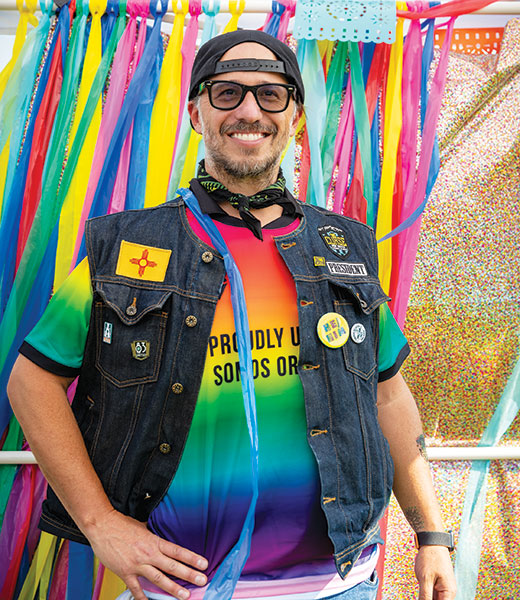 The Curse is a reference to New Mexico’s first governor, Lew Wallace. When he arrived in the state, Wallace struggled with snakes, cacti, and the heat. He wrote to his wife that things that seem to work elsewhere “fail in New Mexico.” The Curse tells its opponents the same thing. Whatever works at home for you—including your strategy on the pitch—won’t work once you cross our borders. It’s the curse of Lew Wallace.

A fan base is born

After a successful debut season in 2019, which included a spot in the playoff play-in round and a run to the quarterfinals of the U.S. Open Cup tournament (open to all levels of American professional soccer), United faced an uncertain 2020 because of COVID. Though the pandemic meant there’d be no revenue coming in from home matches, United went ahead with plans to form the Somos Unidos Foundation. This established the New Mexico United Academy, a youth soccer program that, unlike most similar programs, is free to all players. The foundation also created more than 1,000 distance-learning kits for students in the Navajo Nation. 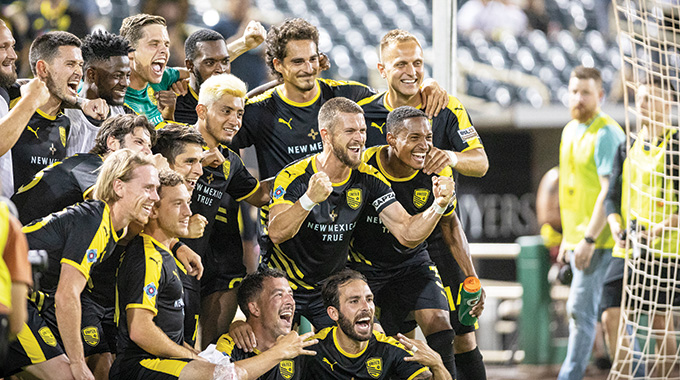 New Mexico United players pose for a photo after a game.

“I think that when you really want to do something that’s at your core, you don’t let the environment or circumstances dictate it,” Trevisani says. “You can’t say, ‘I’m only going to go do this on a sunny day’ or ‘I’m only going to go sailing when the wind is at my back.’ Sometimes, when it’s time to sail, the winds are right down the front of your boat and you’ve got to deal with it. That’s how I felt about Somos Unidos: It was our time to do it because people needed it.”

This community involvement has expanded the team’s popularity. When United takes to the road, pubs, breweries, and other places hold watch parties. New Mexico’s evolving brewery scene has unofficially adopted the club. Second Street Brewery in Santa Fe is a gathering spot up north, while the Boneyard Cantina by Icebox in downtown Las Cruces is a central meeting point in the south. In Albuquerque, Hollow Spirits Distillery and Santa Fe Brewing at Tin Can Alley are favored spots for The Curse to gather and watch games. Even the city’s Civic Plaza gets involved, with a big screen erected on one end to show the game. 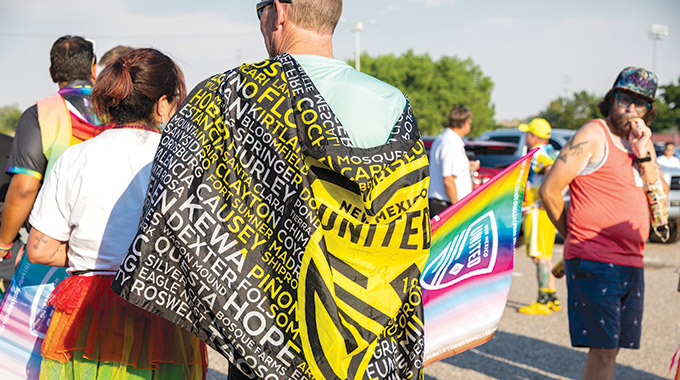 A fan wraps New Mexico United’s official flag around himself.

“Soccer in itself is unique in that its following builds a niche, especially compared to other sports,” says Joaquin Wells, the taproom manager for Santa Fe Brewing in Albuquerque. The bar was already a spot for local fans of England’s Arsenal club to watch games. Wells has christened a back area of the bar, where New Mexico United’s flag hangs and supporters gather to watch the team’s road games, as The Curse Corner. “I’ve never been to the U.K., but it makes me feel like I’m there, inside those bars, taverns, or pubs where everyone’s wearing jerseys and the whole house is full and it’s all soccer, soccer, soccer. There’s a whole vibe around it.”

While these outposts can provide evenings of camaraderie and community, the best way to understand the passion behind United is to attend a game.

At the home game on that balmy early-summer evening, The Curse throws its pre-game tailgate, and the parking lot fills up. Fans fire up portable grills, raise flags and banners, and set up tents. Because it’s Pride Night, The Curse put together a drag show, with local performers strutting and dancing to the audience’s cheers. 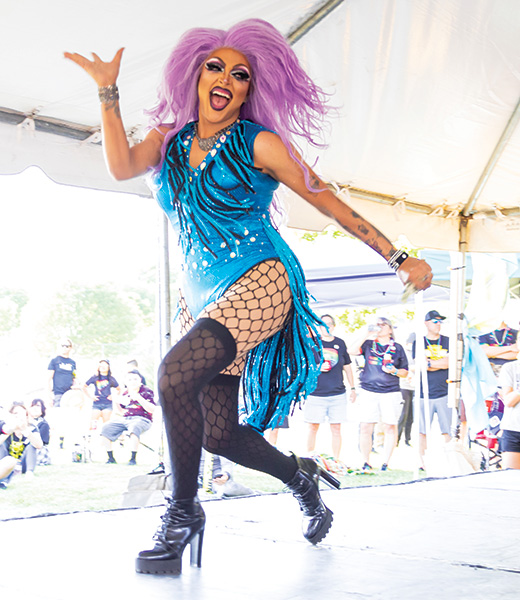 A local performer dances at The Curse’s tailgate drag show.

“I don’t think that caring or advocating for human and social issues needs to be mutually exclusive to sports, and we really lean into that here,” Gutierrez says. “There’s so many things that we get behind in our community.” Inside The Lab, fans line up for pizza from local chain Dion’s and cans of Stay Goalden, a collaboration between United and Ex Novo Brewing Company. The replica jerseys at the merch stand double down on the local vibe. Team uniform sponsors include Meow Wolf and Electric Playhouse—interactive, immersive spaces in Santa Fe and Albuquerque, respectively.

As the sun drops behind the stadium walls, the game begins with a horn blasting through the crowd, and United goes on the attack, moving the ball down the field. New Mexico dominates possession of the ball, but as the first half ends, the game is tied at 0. 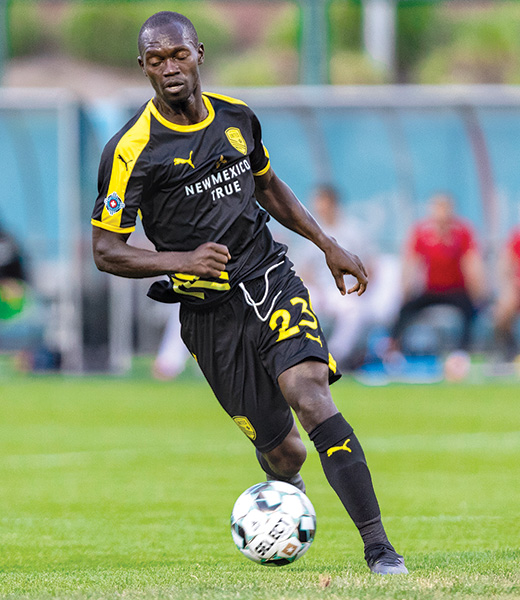 As the match wears on, both teams get shots on goal, but neither scores. New Mexico defender Kalen Ryden comes the closest, but Austin Bold’s goalkeeper makes a nice save. The game draws to a close at about 9:30 p.m., ending in a scoreless draw.

Nevertheless, a festive atmosphere prevails. Players walk around the perimeter of the pitch, taking photos with fans while Ben E. King’s “Stand By Me” blares from the speakers. Local players chat with family members, front office workers say “hi” to fans, and The Curse slowly packs away its tifo (flags, banners, etc.).

A member of The Curse leading the uproar during Magic Minute.

The experience is unlike anything else in American professional team sports. This isn’t a minor league, where the best players can be called up to the parent club at a moment’s notice. It’s also not an impersonal behemoth, where the players are on pedestals above the fans. The players represent New Mexico United, but they also represent New Mexico itself—and the same goes for the fans in the crowd wearing replica jerseys and scarves.

“I like exactly where we are right now,” Trevisani says. “This isn’t about being the biggest. We’re not in a jersey- selling contest with Manchester City. I’m less concerned with the size of New Mexico United and want us to focus on staying true to our values, ethos, and beliefs. I trust that that will take us to the right place.”

Robert Spuhler is a travel and culture writer who in his spare time can be found playing soccer in the park.