Chile peppers may reign supreme in New Mexican cuisine, but they’re not the only thing drawing foodies to the Land of Enchantment. A new crop of chefs is expanding the state’s culinary landscape with unexpected dishes and flavors. Despite diverse backgrounds and influences, these chefs share a love for supporting local farmers and their community. Meet five chefs who are making a name for themselves—and solidifying New Mexico’s place on the culinary map. 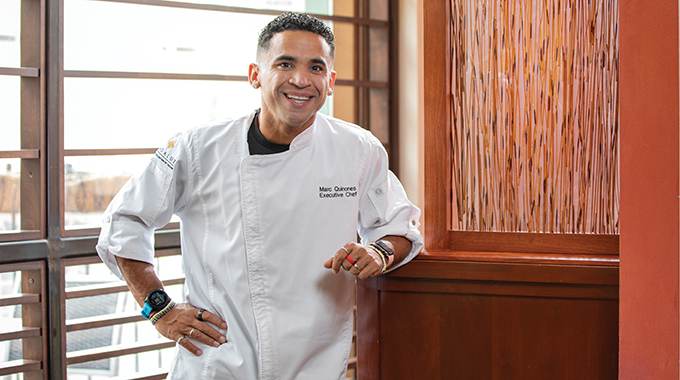 You can learn a lot about Marc Quiñones through his cuisine. “My food is from the heart,” says the 39-year-old chef from Albuquerque. “My mother and grandmother instilled in me a love of bold flavors with passion and excitement.”

Take, for example, his signature dish at Más Tapas y Vino—a crispy pork belly with an Anasazi bean ragout, toasted corn, and a harissa-sherry reduction. Inspired by the cans of Van Camp’s Pork and Beans in his mom’s pantry, Quiñones created the dish as an homage. “It’s very much my love song to her,” he says.

Quiñones was born in the South Bronx but moved to New Mexico at 13 with his mom and sister to be with his terminally ill grandfather, who passed away six months later. During that difficult period, he found solace spending time with his mother in the kitchen and watching her cook.

Quiñones pursued his love of cooking at Le Cordon Bleu College of Culinary Arts in Scottsdale, Arizona, graduating on the President’s List in 2005.

A big believer in giving back, Quiñones volunteers at local elementary schools, prisons, and halfway houses.

“I was raised by a single mother who fought to make sure I never went to bed hungry,” he says. “I very much connect with those in the struggle. It’s where my character was developed, and I want to prove that with hard work and a strong support system, you can rise from the bottom and really make a difference.” 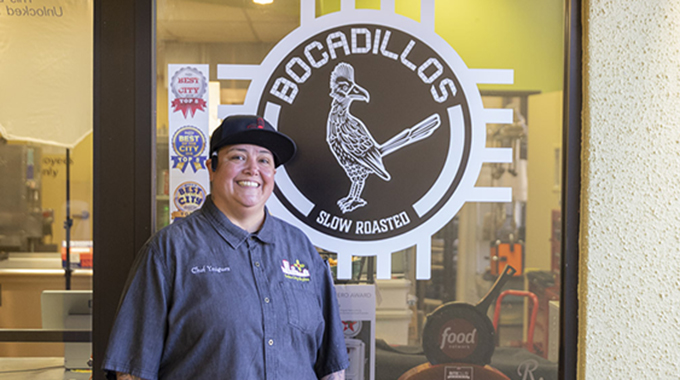 Chef Marie Yniguez has elevated the art of sandwich-making at Slow Roasted Bocadillos in Albuquerque. Photo by Gabriella Marks

Even if you’ve never ordered a chipotle-infused Duke City Ruben at Slow Roasted Bocadillos, there’s a good chance you’d recognize Marie Yniguez from her many appearances on Food Network shows such as Chopped, Guy’s Grocery Games, and Diners, Drive-ins and Dives.

The 44-year-old native New Mexican is all about representing her hometown of Albuquerque and introducing the rest of the world to New Mexico’s food and culture.

“New Mexico is in my blood,” says Yniguez. “Our culinary style here is very traditional and family-oriented, yet it’s filled with dynamic flavors influenced by a surprising variety of different cultures. We cook like our mamas!”

Yniguez’s first official culinary job was at Wendy’s, where she experienced the line-cook rush, an adrenaline blast that kitchen workers often feel after putting out order after order for hours and hours. “You’re shaking, sweating, and feeling amazing, knowing you did that without knowing exactly what happened,” she says. She was hooked.

After years of working in other restaurants, Yniguez and her wife, Karla Arvizu, launched Bocadillos Catering in 2009. Four years later, they opened Slow Roasted Bocadillos, an award-winning sandwich shop whose made-from-scratch dishes, including breakfast burritos and an unparalleled Cubano, are jam-packed with meats slow-roasted for at least 12 hours.

“I love anything between two pieces of bread,” says Yniguez, laughing. “Our food is made slow and low with all our love. We want to make sure customers leave full, happy, and satisfied.”

Celebrated for her philanthropic acts, the popular chef is known for giving back to the community, at one point preparing two meals a day for more than 1,000 schoolkids. “It makes my heart happy to know that, through food, we can change the world,” she says. “Or, at least, somebody’s world.”

Chef of Adobe Rose in Artesia 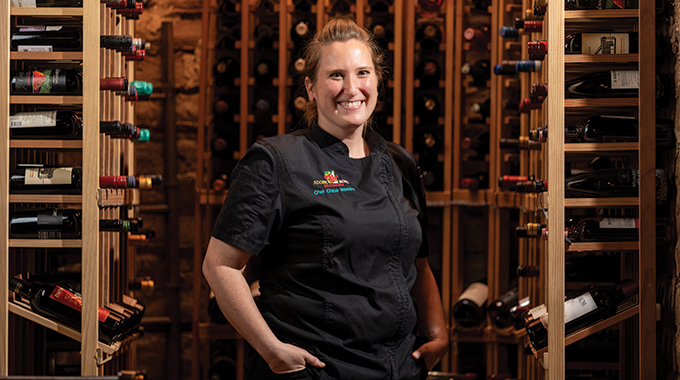 Although Chloe Winters was born and raised in Texas, she has deep roots in Artesia and Carlsbad. “You can’t throw a stick in this town without hitting someone in my family,” she says.

Family is everything to Winters, 34, who grew up cooking with her grandma in Katy, Texas. When her grandmother died, Winters decided she would honor her by doing what she loved to do.

Winters attended the Culinary Institute of America in Hyde Park, New York, in 2007. After graduation, she spent a few years working in Houston, before moving to Artesia to open Adobe Rose with her father.

“New Mexico cuisine is really unique, and I didn’t get it until I had lived here a couple of years,” she admits. Nevertheless, Winters has won over her small, tight-knit community with familiar dishes such as green chile stacked enchiladas and New York strip steak, as well as with new flavor combinations in dishes like chile devil pot roast and her signature pan-seared crushed lemon salmon.

In 2014, the New Mexico Restaurant Association named Winters its Chef of the Year. “I take my role in honoring and elevating our local cuisine seriously,” she says. “It’s a wonder to me to be a New Mexico chef.”

Chef and co-owner of TerraCotta Wine Bistro in Santa Fe 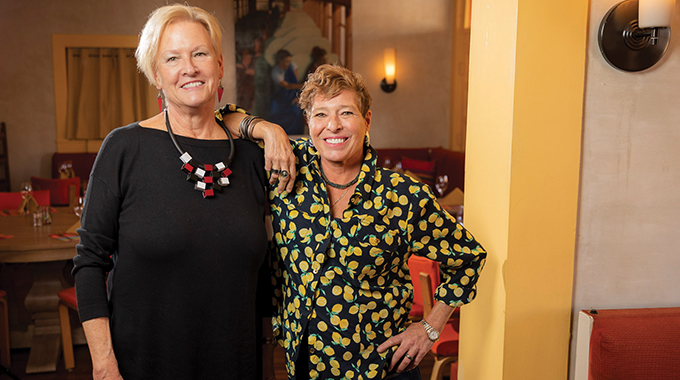 Catherine O’Brien, or Chef Catie, as she is known, likes to describe TerraCotta Wine Bistro, which she co-owns with business partner Glenda Griswold, as a “chile-free zone.”

“Although I love New Mexican food, I thought it was well-represented in town and a more contemporary American cuisine with a touch of Southern cooking would be welcome,” says the 59-year-old chef. “Southern cooking has always been my favorite. My mother, a terrible cook but a dear friend—and Julia Child—gave me inspiration and taught me kitchen skills.”

O’Brien and her best friend, Griswold, arrived in Santa Fe 25 years ago and opened Peas ’n’ Pod Catering, which is still going strong. “In a moment of insanity,” O’Brien says, they agreed to buy a restaurant and turn it into TerraCotta, which has become a Santa Fe highlight.

TerraCotta is so much a part of the community that it even opens on Thanksgiving and Christmas, and O’Brien is involved in many charitable events. “Moving here was the best thing I ever did,” she says. “Giving back to the community that I love so much is very important to me.”

Fortune favors the bold as chef Eduardo Rodriguez opened Zacatlán during the pandemic to great success. Photo by Gabriella Marks

Eduardo Rodriguez, 43, has never been one to shy away from a challenge. Starting his restaurant career in 1994 as a dishwasher at Coyote Café in Santa Fe, he moved on to Geronimo, where he was again hired to wash dishes but worked his way up to sous-chef.

His boss, beloved Santa Fe chef Eric DiStefano, became his mentor, and in a full-circle moment, DiStefano hired Rodriguez when he bought Coyote Café. After DiStefano died in 2016, Rodriguez, in the midst of his own grief, was able to take the helm as executive chef and continue his friend’s legacy while creating his own.

Perhaps it was that same resilience that inspired Rodriguez to open Zacatlán—his dream project—during the height of the pandemic.

“I was binge-watching Netflix when I got a call that a spot had become available downtown,” he remembers. “I decided to take the leap.”

With a menu that pays homage to the authentic dishes he grew up cooking with his mother in Zacatecas, Mexico—the moles are standouts—Zacatlán has already become an important part of the culinary conversation.

Rodriguez’s signature dish, cochinita pibil, a pork shank covered with banana leaves and slow-cooked with a variety of spices for 12 hours, nods to his roots in Mexico and celebrates the Southwestern flavors of New Mexico.

“I want my food to bring comfort to our community,” he says. Judging by Zacatlán’s five-star reviews on Yelp and TripAdvisor, he’s already achieved his goal.