Better health often tops our New Year’s resolution lists, and plant-based diets—or at least more meat-free meals—can help pave the way to that goal. Vegan and vegetarian diets are rich in nutrients and can reduce the risk for chronic illnesses, such as heart disease and diabetes, and some cancers, according to the Mayo Clinic. With delicious restaurant options across New Mexico, eating well may become at least one New Year’s resolution you keep. Here are some of our favorite places around the state to grab vegetarian and vegan meals. 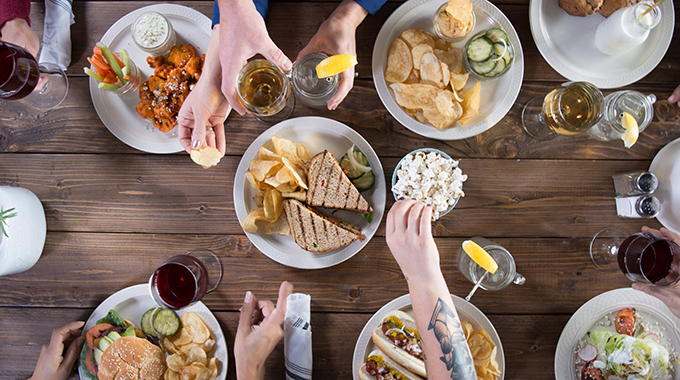 Sandwiches and comfort food at The Acre in Albuquerque. | Photo courtesy The Acre

Hearty vegetarian staples and plant-based comfort foods top the menu at this cozy restaurant. Veteran chef Shawn Weed’s search to feed his kids something beyond frozen chicken fingers inspired him to open The Acre, so it’s no surprise the menu is flush with made-from-scratch dishes.

The Power Plant salad delivers more than 30 grams of protein from spinach, quinoa, peas, chickpeas, and other ingredients. The Acre also plates up laid-back favorites such as cauliflower “wings” dunked in a spicy buffalo sauce. Weed says more than half of his guests aren’t vegetarian but simply relish the tasty and healful food.

“People told me this would never work,” he says. “However, I think there are enough people craving this food, whether they eat a plant-based diet all the time or they just want a well-made meal with great ingredients.” 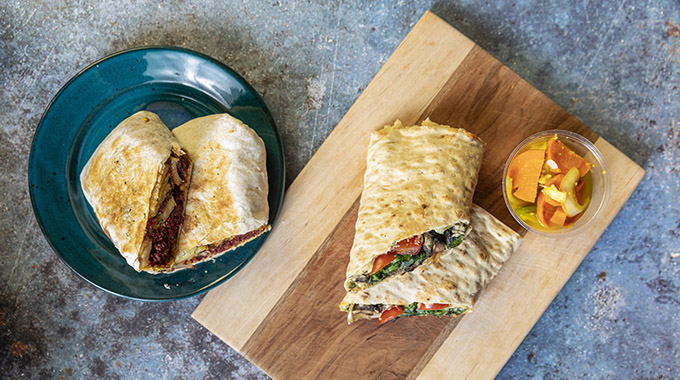 Dishes from around the globe get a vegan spin at this City Different restaurant. The former food truck graduated into a brick-and-mortar eatery in May 2020. Vegan chef Katlyn Badeaux’s menu features several on-the-go options, including a mushroom shawarma wrap with spice-marinated fungi, and a “chorizo” burrito with lookalike cheese sauce made from cashews. Badeaux also creates her own take on Nepalese momo dumpling soup with broth enriched with fresh turmeric and ginger. 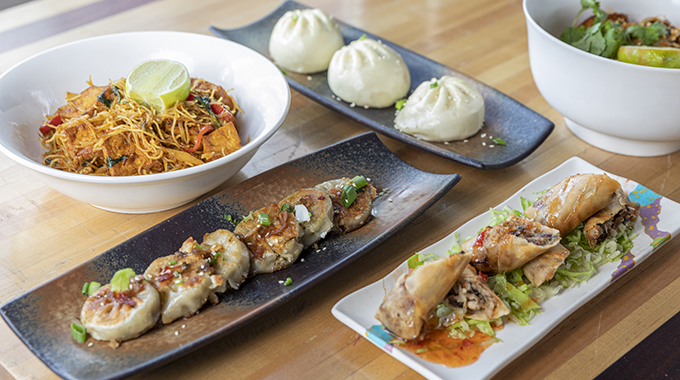 What does a cosmetic dentist do with his free time? In the case of Colin Forde: Start a vegan restaurant to share his love of healthy, plant-based fare. Launched in April 2020, Green Gene Vegan Café serves numerous Asian-centric items (try the Singapore noodles). However, the restaurant draws on other regional cuisines as well. (Don’t miss the Trinidad doubles, which are flat breads filled with curried chickpeas.) Forde worked with a local chef to develop the menu, which has been a hit with vegans and nonvegans alike.

Various locations in Albuquerque and one in Santa Fe. 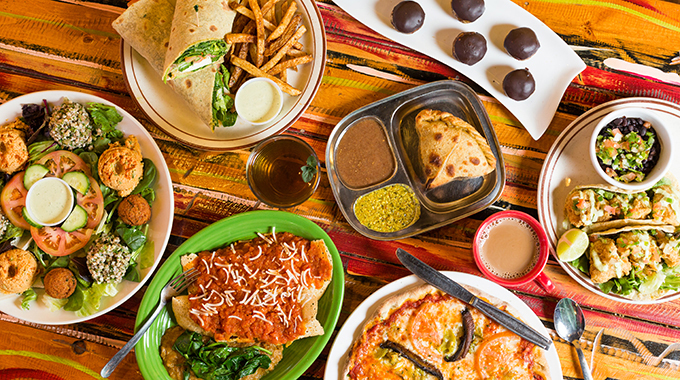 The South Indian sampler offers small bites of several star dishes: a mini masala dosa, two vadais, and a cup of sambhar soup, served with coconut chutney. Diners with dietary restrictions delight in Annapurna’s menu. Offerings are largely vegan and free of gluten, dairy, and soy; they can be nut-free, too. You won’t find peanuts or corn used anywhere in the restaurant.

“We have so many menu items, and all are meticulously put together,” Naidoo says. “You can come in for vegetarian food or, if you have allergies, we have a menu item for you.” 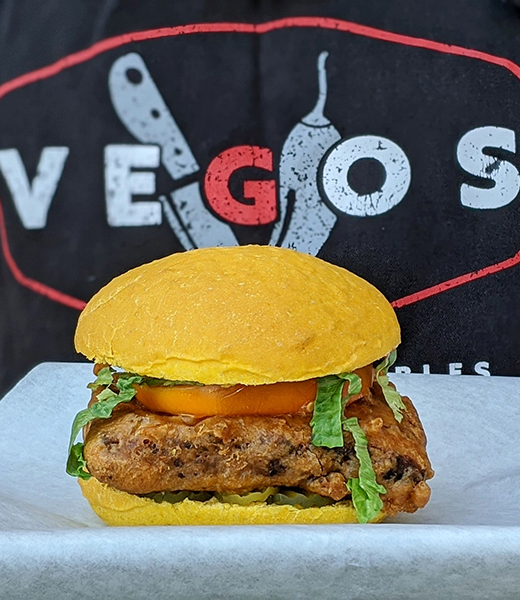 Nobody Calls Me Chicken Sandwich at Vegos. | Photo courtesy Vegos

Who says vegetarian and vegan food has to be wholesome all the time? The Vegos food truck reimagines hearty New Mexican and American favorites without meat or animal products. Traditional tamales turn vegan with red-chile jackfruit standing in for pork. “They’re tamales like grandma would make,” says chef-owner Elizabeth Bibiano. “People were amazed they didn’t have meat in them. It let me show people you can still enjoy flavor and culture while being plant-based.” Bibiano has also adapted other comfort food favorites into vegan-friendly dishes. A traditional “fried chicken” sandwich made with tofu pleases meat eaters, too. 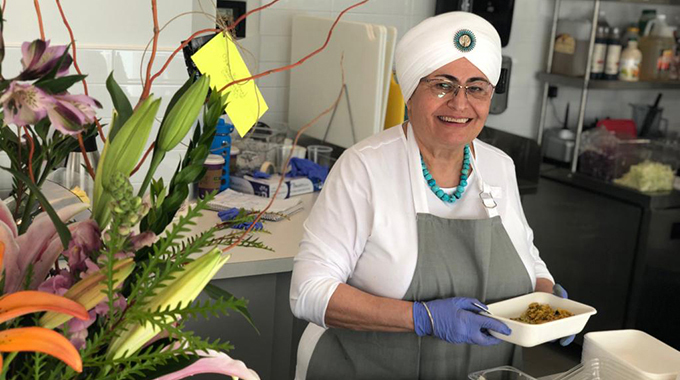 “We are healers ourselves, and we have learned how to heal through the art of food,” says Gurubachan Kaur Khalsa, manager of Mata G Vegetarian Kitchen, which is owned by his wife, Mata G. Though technically retired, the two kundalini yogis still wanted to nourish people, and they opened their intimate Nob Hill eatery with most menu items ready to take home. “For us, healthy food is the real comfort food,” says Kaur Khalsa. Vegetarian—and often vegan—wraps, sandwiches, and salads fill cases of prepared foods. Standouts include the Lebanese salad with kibi cakes (cracked wheat blended with zucchini and spices), the tofu salad sandwich, and house-made hummus. Warm, rotating daily specials draw on influences from Lebanon, Italy, and Mexico, among other countries.

7. The Wake and Take 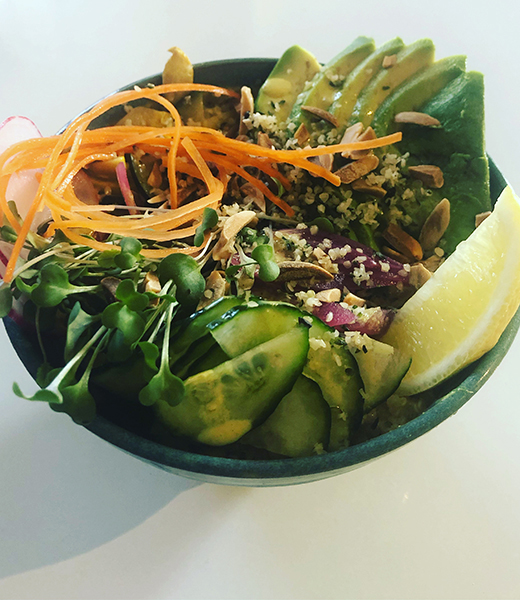 Do you crave a breakfast that will make you feel like you can conquer the day? With names inspired by powerful figures like Norse gods, the smoothies and acai bowls at The Wake and Take might do the trick. The Odin bowl blends acai berries with blueberries, banana, protein-packed peanut butter, and hemp seeds. Savory items like the Curandera bowl, with brown rice and Anasazi beans, round out the breakfast- and lunch-heavy menu. The names of the offerings and the restaurant’s vegan focus both emerged from co-owner Brittany Garner’s spiritual journey and a commitment to offering health-conscious food in her community, she says. She runs the restaurant with her husband, Noah, a Taos-area native. “We like to have a lot of fun with what we do and make it approachable,” Brittany says. “You may not consider yourself a vegan, but everyone likes smoothies.”

Ashley M. Biggers is a freelance journalist, editor, and vegetarian based in Albuquerque. Her writing has appeared in numerous print and digital publications, including CNN Travel, Lonely Planet, and Self.