By Patricia Harris and David Lyon

This year, enjoy your fall foliage drive with a side of fries or a short stack of blueberry pancakes and a side of corned beef hash. A wealth of classic diners enhances Northern New England’s leaf-peeping appeal.

The leading regional diner builder, Massachusetts-based Worcester Lunch Car Company, set the style for urban diners with its porcelain-on-steel panel exteriors, old-style sign typography, and extensive use of wood-trimmed interiors. During its 1906–1961 run, Worcester constructed 651 diners, and other makers in New England and the Northeast contributed scores more. A large number of those lunch wagons landed in Northern New England, and because New Englanders hate to throw anything away, many iconic diners remain in business.

Better yet, their griddles sizzle where the foliage blazes. Small-town diners offer good, honest food at fair prices, which is why they’re filled with local folk. Chat with your neighbor on the next stool over. You might get a tip on a secret foliage road. 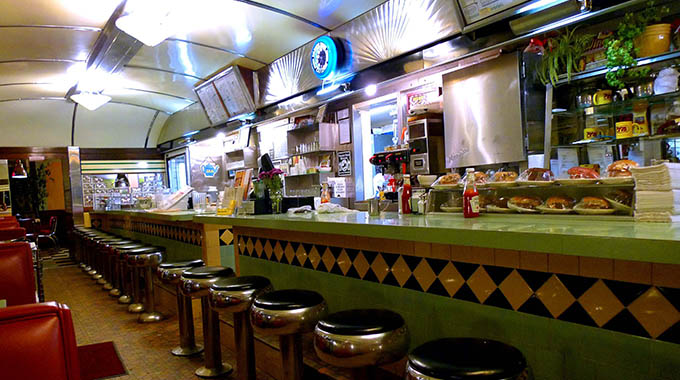 Swing by the Birdseye Diner after dark to bathe in the red glow of its neon sign, commissioned by John and Pam Rehlen, who bought the diner in 1995. The 1940s Silk City diner from New Jersey had been in Castleton since 1968, but was hiding its architectural charms. The Rehlens stripped off barn-board siding and removed a pitched roof to restore the diner’s original appearance. The Birdseye now has the classic diner look: 11 red vinyl booths, green Formica tables and countertops, and a line of 20 rotating counter stools.

As a member of the Vermont Fresh Network, the Birdseye uses as much local meat and produce as possible and offers diner standards such as meatloaf and open-faced roast turkey and roast beef sandwiches, as well as 10 specialty burgers. But a lot of customers make a special trip for the fried clam strips and the beer-battered fish-and-chips.

The Peterborough Diner is a quintessential example of a late Worcester Lunch Car Company diner. Installed in 1950, the handsome green-and-cream porcelain structure has never strayed from its original location in the small community that locals believe was Thornton Wilder’s model for his 1938 play Our Town.

The color scheme continues inside, and the diner features eight handsome wood booths and wood trim at each end. But daily regulars usually grab a seat at the counter. If you can’t decide what to order, try a staff favorite, such as a chicken tender wrap sandwich with barbecue sauce or a meaty Reuben sandwich and crisp, twice-fried french fries. The diner also excels at dessert, from house-made bread pudding to classic pies. The hard part? Choosing between blueberry or apple (with or without ice cream) or chocolate cream pie. 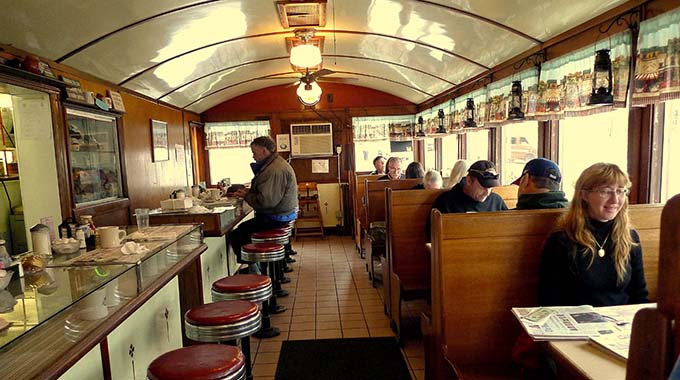 In 1997, Chris Williford began cooking at the pale yellow and red-trimmed Littleton Diner. In 2003, he and his wife, Patti, took over the 1940 Sterling diner, which was manufactured in Merrimac, Massachusetts.

They kept all the diner classics, from liver and onions to the roast turkey dinner, and added the likes of wraps and panini. But breakfast remains the big draw: The diner is famous for its corned beef hash, and the pancakes aren’t bad either. The Willifords make pancakes with flour milled at the Littleton Grist Mill on the Ammonoosuc River behind the diner. When the 1798 mill was restored in the late 1990s, “we had an exclusive on their pancake flour,” Williford says. “[The pancakes] really caught on.” Littleton regulars tend to favor the whole-wheat versions, while travelers are more likely to order a stack of nuttier, earthier buckwheat. They are at their best with pure North Country maple syrup (a slight surcharge). 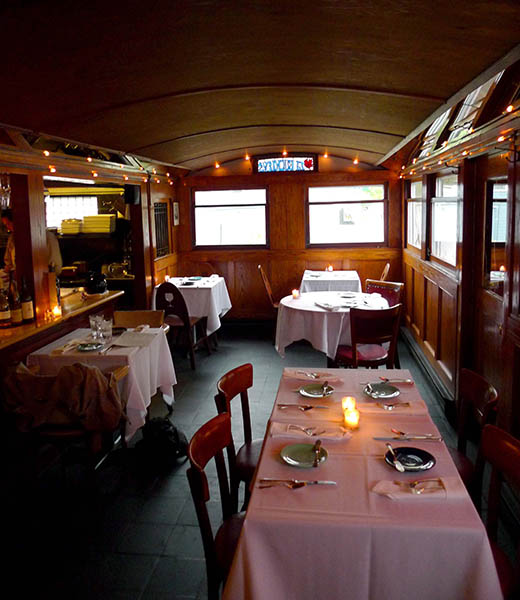 Chef Michael Fuller was an advocate of locavore dining decades before it became the vogue, and he’s a pioneer of New England gourmet diner dining. In 1983, he converted a vacant late-1920s Worcester Lunch Car Company diner into T.J. Buckley’s Uptown Dining. “I had apprenticed with a French chef and had worked in fine dining, so I was ready to open my own bistro,” Fuller says. “Then this diner became available.”

Although the diner retains its wooden vaulted ceiling and much of its original trim, Fuller enlarged and opened up the kitchen so that diners at the eight candlelit tables can watch Fuller and his staff work to the accompaniment of a cool jazz soundtrack. “It’s like everyone sits at the chef’s table,” Fuller says.

The nightly menu (recited, not printed) features appetizers such as a smoked trout tartlet with chèvre and a sprinkling of trout roe, and entrées such as a duo of rabbit leg and chard-stuffed rabbit loin. Many of the herbs and flower garnishes were plucked moments before the meal from the diner’s flower beds. The individual salads that accompany entrées are so gloriously crafted that they could pass as flower arrangements. Even in foliage season, the view on the plate measures up to the view through the windshield. 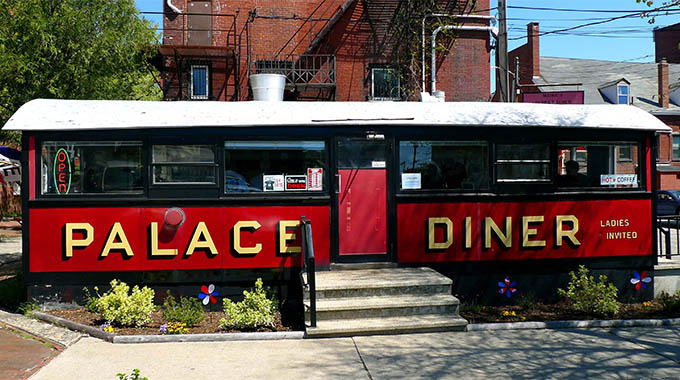 You’ll find one of the area’s warmest welcomes at the Palace Diner, which was manufactured by the Pollard Company in Lowell, Massachusetts. Originally opened for mill workers, it has been operating continuously in the same town since 1927. It was a long-nurtured dream of Greg Mitchell and Chad Conley, who took over the diner in 2014. Just 15 stools line the long counter, so mealtime feels like a big family gathering.

The Palace serves soup and sandwiches and other lunch fare. Try the special home fries made in classic diner fashion: boiled red potatoes cubed, seasoned with a special “Palace powder,” baked, and then finished on the griddle.