In Hawai‘i, local artisanal gelato and ice cream makers throughout the state have loyal followings. Many operate family-owned businesses—handcrafting their products in small batches—and have inspiring stories to share about their versions of America’s favorite dessert. The three kama‘āina we spotlight here don’t have culinary backgrounds.

They started their companies for one simple reason: They love ice cream and the way it can magically lift a heavy heart and light up a solemn face. They’re hands-on with flavor creation. Nearly every idea, however outlandish, is literally on the table—and happy customers keep coming back for more. We also introduce you to seven more ice cream shops serving up memorable flavors to try, just for licks. 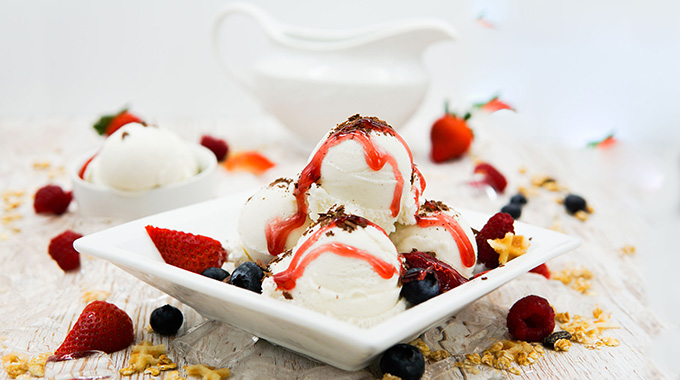 A PhD in physical chemistry from the University of Hawai‘i at Mānoa helped Dirk Koeppenkastrop excel in an occupation that gives him great satisfaction: owner and maestro gelatiere of IL Gelato.

After earning that degree in 1992, Koeppenkastrop worked in the analytical chemistry field for 19 years, managing laboratories in Hawai‘i and Germany. Embedded in his mind, however, were fond memories of growing up with gelato in Bochum, Germany.

“In the summer, the ice cream wagon came by my house every day, ringing its bell,” he said. “We kids always bought something, and over the years I kept thinking, I love gelato; why not learn how to make it?”

In 2009, while Koeppenkastrop was in Hamburg as an executive for Eurofins, the largest food-testing lab in the world, he began using vacation time to attend weeklong gelato-making courses at Carpigiani Gelato University in Bologna, Italy. His knowledge of chemistry made it easy for him to understand the process, and he earned the Master Gelato Maker title in 2010. That same year, Koeppenkastrop and his wife, Nicole Lueker, opened their first IL Gelato, realizing a longtime dream of settling in Hawai‘i.

Twenty of more than 200 flavors are available every day in their five O‘ahu locations. Ingredients include dark chocolate from Belgium; acai from Brazil; yuzu, matcha, and azuki beans from Japan; pistachios, hazelnuts, and walnuts from Italy; pineapples and Meyer lemons from O‘ahu; pineapples from Maui; and Kona coffee and macadamia nuts from Hawai‘i Island.

“My employees jokingly call me IL Gelato’s best customer because I eat almost a pint of our gelato every day,” Koeppenkastrop said. “Gelato has one-third less sugar and fat than ice cream, so it’s okay to eat three times as much of it, right?” Starts at $4.25 for a scoop.

Wing Ice Cream Parlor: Some unexpected flavors you might see on the menu: pizza, poke, Cheez-It, roasted garlic, Grey Poupon, and Maui onion and sour cream. Starts at $4.50 for a scoop. 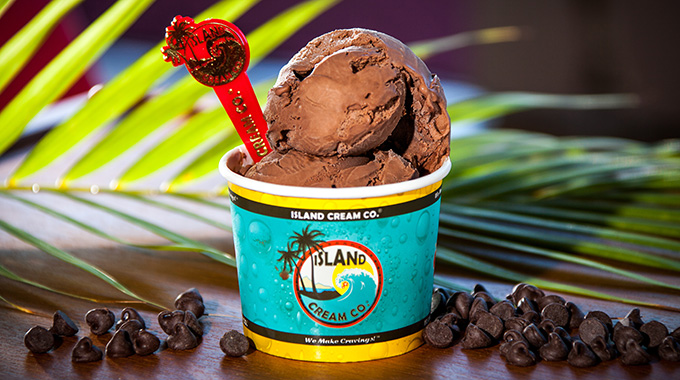 I can make it better. That’s what Dan Blessing of Island Cream Co. thought when he began seriously taste-testing gelato and ice cream in 2013. He found that, overall, gelato lacked full, strong flavors. And inexpensive ice creams often contained a lot of air—they were light and fluffy but void of a luxurious mouthfeel.

Blessing began experimenting in his home kitchen, armed with knowledge he had acquired as the president of a company with a division that, over 40 years, had developed dozens of formulas for the car wash industry. “I learned there’s an effective, efficient process for homogenizing things based on understanding harmony between products,” he said.

The result? Not gelato and not ice cream, but what Blessing dubbed “island cream,” which he says offers both the intense flavors of the finest gelato and the smooth, creamy texture of premium ice cream. Since he launched Island Cream Co. in 2014, he has created 200-plus flavors; 36 are in the rotation at the Lahaina shop on any given day.

Everything is made fresh, from the hot fudge and creams to the cakes, breads, and cookies to the vanilla, chocolate, and cinnamon cones. Two top sellers are Coconut Poi (made with real poi); and Banana Maui, warm banana bread (Blessing’s late grandmother’s recipe) paired with vanilla island cream, fresh bananas, brandy, and banana liqueur. 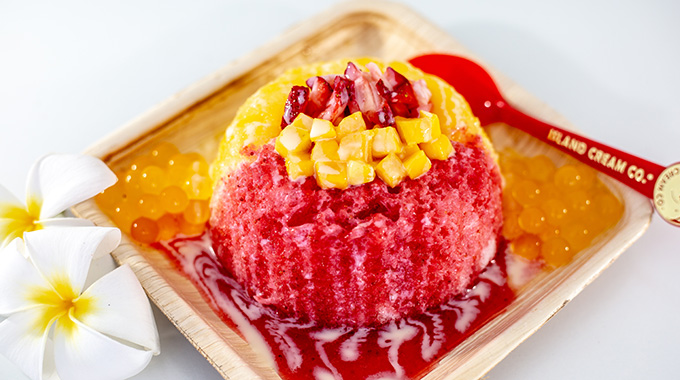 “Sposhy” shave ice might include a mini scoop of island cream (your choice); a topping of condensed milk, fresh mango and strawberries; and a puree of mango or strawberry; with boba on the side.

Blessing creates all of Island Cream’s recipes and products. “I’m constantly observing what people enjoy and thinking about how we can improve our flavors and come up with new ones,” he said. “The possibilities are endless, which makes the process fun, interesting, and tasty!”

Starts at $5.75 for one scoop or two mini scoops of different flavors.

Paia Gelato: Gelato Cake: An 8-inch round cake with a brownie or sponge cake base can be layered with three or four flavors of your choice. Options include Mango Passion Cheesecake (pictured; with mango sorbetto, passion fruit sorbetto, and cheesecake gelato). Serves 8 to 12. $35.95.

Coconut Glen’s: Coconut Cream: coconut milk, cane sugar, turmeric, honey, black pepper. All of this shop’s vegan ice creams are made with coconut milk. $8 for 8 ounces (choice of two flavors) served in a half coconut shell. 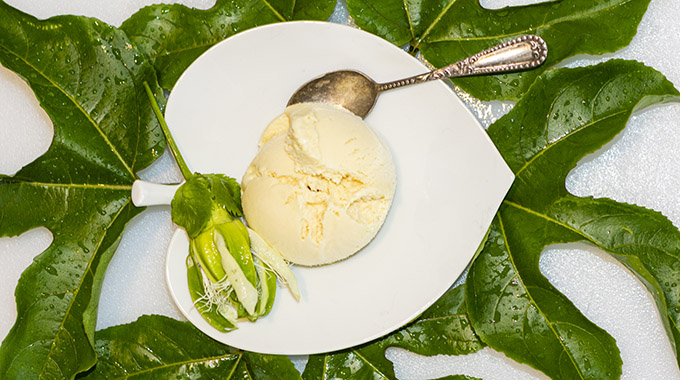 Hawaiian Licks founder Ariel Shumar describes herself as an “ice cream fiend” who always picked up a pint or two whenever she went shopping. The problem was she lives in Kalapana—20 minutes from the nearest grocery store—and she could never remember to bring a cooler when she shopped. The ice cream would be half melted by the time she returned home.

“My partner bought me an ice cream maker for my birthday in 2017,” said Shumar, who doubles as a graphic designer. “We have vegan neighbors, and I made my first batch of coconut milk ice cream for a neighborhood potluck. I noticed everyone preferred it over my dairy version. The flavor and texture were really close to dairy, but it didn’t have the heavy feel of milk fat. Someone said I should sell it, and Hawaiian Licks took off from there, with a lot of trial and error.”

“We make more than 50 flavors, and we’re always working on something different,” she said. “Ever heard of marang? It’s related to breadfruit and smells like someone set a pile of tires on fire, but it tastes like cotton candy.”

Hawaiian Licks is the way to go if you love ice cream but can’t or don’t want to eat dairy products. “We call it ‘nice cream,’ ” Shumar said. “It’s 100 percent plant-based and 100 percent delicious.” Starts at $4.50 for a scoop.

Cheryl Chee Tsutsumi’s go-to comfort food is ice cream, whether it be as a bar, shake, split, sandwich, sundae, float, in a cone, or all by its luscious self.