6 female chefs who are changing the world of cooking

The food at Honey Road in Burlington, Vermont, is locally sourced. | Photo by Kristin Teig

To reach Aragosta at Goose Cove, an oceanfront restaurant on Maine’s craggy coast, guests follow State Route 15 over a dramatically narrow suspension bridge, then cross the Deer Isle Causeway. Turning onto Goose Cove Road from State Route 15A, the road narrows even further, with pine trees closing in on both sides, until it turns into a bumpy graveled way. Just when you suspect you might be lost, however, the vista opens up to reveal a cove with a rocky beach and views of pine-tree packed islands beyond. To the left, a building covered with weathered shingles, partly obscured by lush vegetation, bears a subtle green sign that simply reads: Aragosta.

For an ambitious prix fixe restaurant, the spot is unusually remote, but it exactly suits Executive Chef/Proprietor Devin Finigan. She is just one of many female chef/owners in Northern New England who is using her talent and leadership to build a restaurant that serves her way of life and family, in an industry where the upper echelon is still very much dominated by men.

Here is her story, along with those of five other women who are carving new paths in the restaurant world. 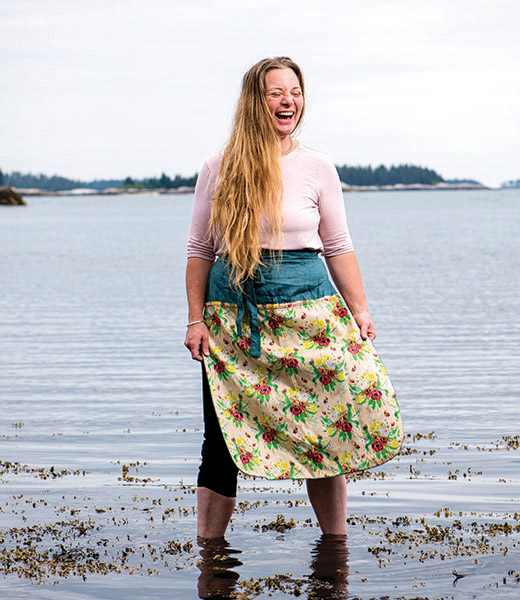 Aragosta at Goose Cove: Devin Finigan’s mission is to present a pure expression of the Maine coast. The 2020 James Beard Foundation semifinalist for Best Chef, Northeast even makes her own salt, drawing water from Goose Cove.

“It is my exercise for the day with my children,” Finigan says, explaining that every March and April, she lugs buckets of salt water into her house, located on the 30-acre grounds of Aragosta at Goose Cove, her restaurant, inn, and gift shop, then boils the water for days. Five gallons of saltwater yields a single cup.

It’s just one way that Finigan brings Maine into her restaurant at every turn. One neighbor dives for her oysters; another raises her chickens. Finigan’s husband traps the lobsters right off shore. And the chef and her team make daily foraging trips for items like sea peas and spicy, briny sea rocket to adorn dinner plates. 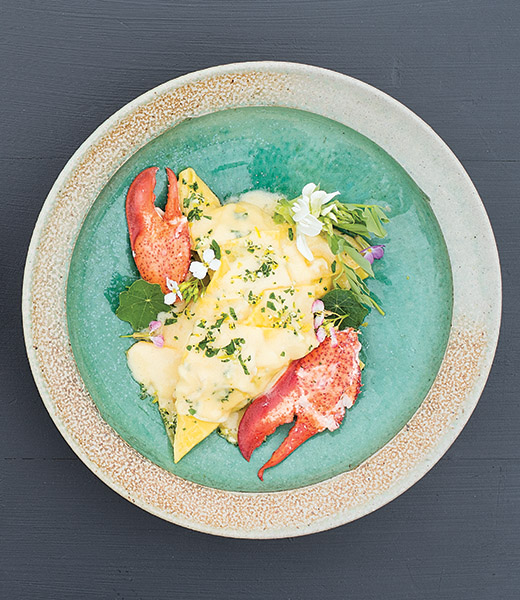 The freshness of the ingredients, combined with Finigan’s fine-dining background, contribute to a magical dining experience. The eight- to 10-course tasting menu changes weekly, reflecting a generosity of spirit, a thoughtful combination of flavors and textures, and the sheer joy of coastal Maine.

“I want to reflect everything around me on the plate,” she says, right down to the moss growing on the stone walls out front, which she uses in table settings. “I think that it’s important to take a moment to look at the moss, because you drove by it and might not have noticed.” 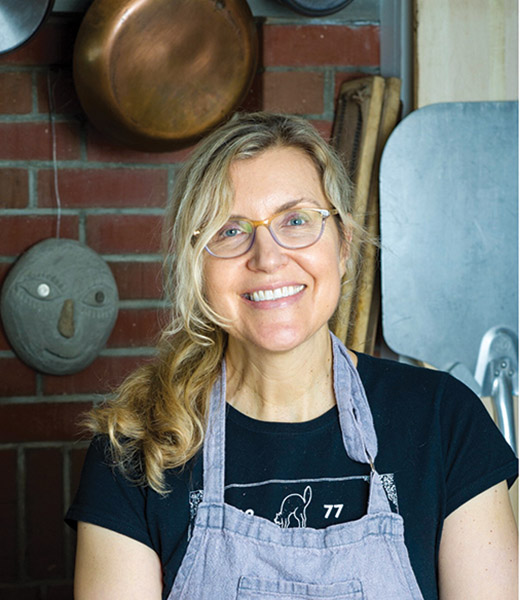 The Purple House: Twice nominated as a finalist by the James Beard Foundation for Best Chef, Northeast, Krista Kern Desjarlais has become popular beyond all of her expectations for her tiny bakery café, The Purple House. But the 544-square-foot space just wasn’t geared toward mass production—or social distancing—so she shut it down during the pandemic to focus on home-schooling her daughter and her passion for tinkering with frozen desserts.

As a result, when The Purple House reopens this summer, patrons will no longer find her bagels, pizza, or salads. Instead, they’ll see a small selection of carefully thought-out pastries, as well as composed desserts built around ice cream. When it’s safe to do so, Desjarlais will also offer lunch and dinner items such as her popular wood-fired pizza. “I had a year to reconcile what The Purple House was and what I was doing there,” Desjarlais says. “I was a pastry chef for 25 years of my career, so it felt really natural to move back toward ice cream and pastry.” 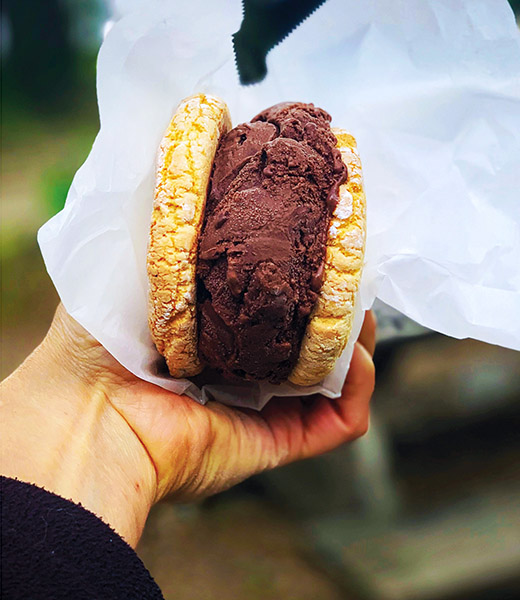 The chef had been testing the waters for a couple years at Bresca and the Honeybee, her summertime ice cream snack bar on Sabbathday Lake’s Outlet Beach. While that location focuses primarily on gourmet scoops, The Purple House will push ice cream in new directions, including nondairy options. “I love Drumsticks,” she says of the classic ice cream truck sundae packed into a cone. “The crunch and the creamy and the cold and the acid—all those things you want to put on a plate as a chef—I’m now going to be challenged to put into a cone or a cup.” 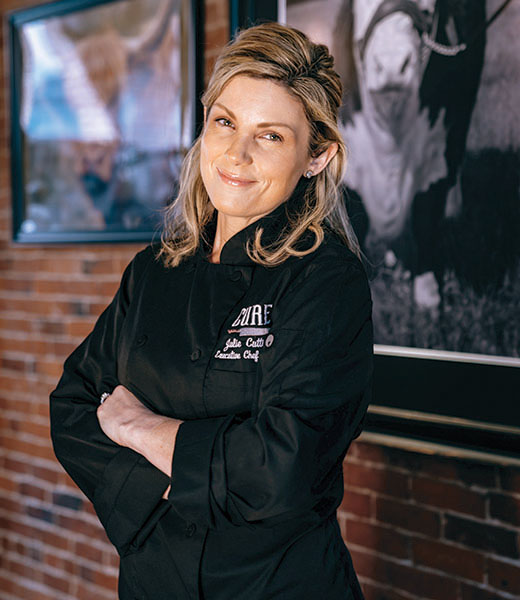 Cure Restaurant: Julie Cutting never expected to run a booming takeout business. But the pandemic forced her hand, and she found that Cure’s modern spin on comfort food—from French onion soup to lobster mac-and-cheese—travels pretty well. “I’ve gotten a lot of great compliments that the to-go food is just as customers would have experienced in the restaurant,” she says. 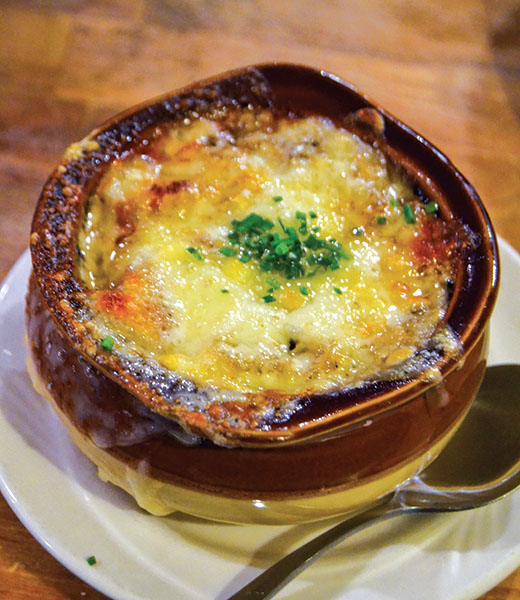 Cutting expects her COVID-compliant patio, indoor dining room, and new sidewalk seating to be full this summer, with people ordering summery favorites like fresh tomato bruschetta and buffalo-style duck drumettes—a returning favorite featuring duck confit and a spicy sauce. At that point, takeout will hopefully take a backseat, a decision she gets to control as the boss. “It’s something I feel proud of, to be able to say, ‘We would make more revenue offering takeout on Saturday nights, but it’s not worth it. It would be a struggle for my staff.’ ”

Chang Thai Café: In 2008, Emshika Alberini left a corporate job to open Chang Thai Cafe with $20,000 charged to her credit card and no professional cooking experience.

“People thought I was crazy,” Alberini recalls. But who’s laughing now? This spring, the chef appeared on the Food Network’s Chopped: Martha Rules, filmed in Kennebunkport, Maine, with Martha Stewart as lead judge.

“I got to share my Thai traditional food with them,” Alberini says—albeit with an odd list of New England ingredients that included Grape-Nuts pudding and shellfish. “Martha liked my mussels, which is really cool.” 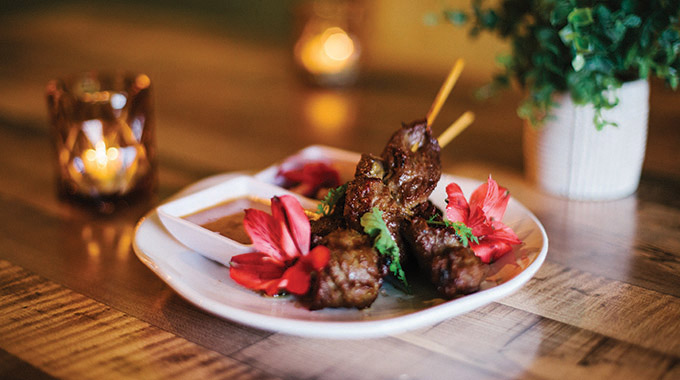 The chef/owner has also been attracting national attention with Emshika’s, her new line of canned Thai iced teas and coffees sweetened with monk fruit. Thai iced tea has always been on the menu at her restaurant, as it was at her mother’s food stand in her native Thailand. The recipe Alberini uses is borrowed from her relatives. But Alberini has moved beyond those roots: Her pan-Asian menu also includes sushi, ramen, poke bowls, and even red curry ramen—a delicious mash-up of Thai and Japanese. 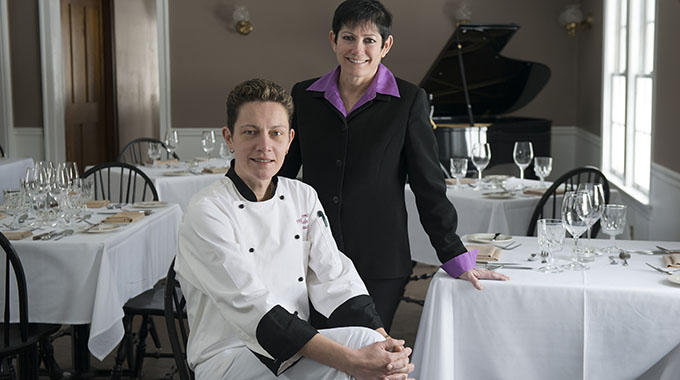 “Somebody thanked me after dinner once, because everything wasn’t infused with maple syrup,” says Executive Chef Jevgenija Saromova, who owns the inn and restaurant with her wife, Mara Mehlman. Not that Saromova, who has a background at Michelin-starred restaurants in Europe, has anything against maple syrup—it’s on the table at breakfast for overnight guests, and she also uses it on an air-dried pigeon breast brushed for seven days in a mixture of maple syrup and fish sauce. She just prefers to use the world as her palette—rather literally. 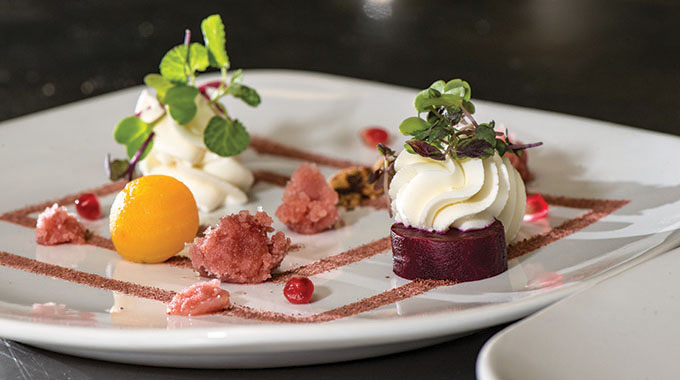 The chef is driven by an artist’s sensibility, her wife says, keeping a pad by her bed to capture sudden inspiration. “Jevgenija considers the plate a blank canvas,” Mehlman says. “She’ll draw how she wants the plate to look, and then she starts putting in the ingredients.” Perhaps langoustines from New Zealand, Wagyu beef from Japan, or octopus from Spain. “I think that’s what makes Chef so sought after,” Mehlman adds. “Customers are intrigued by her approach.” 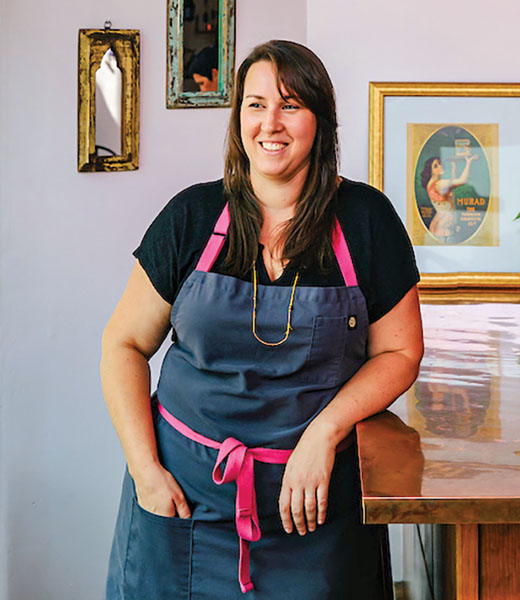 Honey Road Restaurant: Visitors to Honey Road can look forward to the return of a much-missed staple this summer—the grilled halloumi cheese. You have to eat it right when it’s cooked or it becomes rubbery, says chef/owner Cara Chigazola Tobin. As a result, the melty delicacy of the restaurant’s Middle Eastern mezze has been unavailable since the restaurant switched to takeout in March 2020. But once Tobin opens up for patio dining, the cheese, as well as fish and other dishes that were not well-suited to travel, will be back. “I look forward to being able to serve fresh food again that people are going to eat right away,” she says. “That way, I know it’s perfect.” 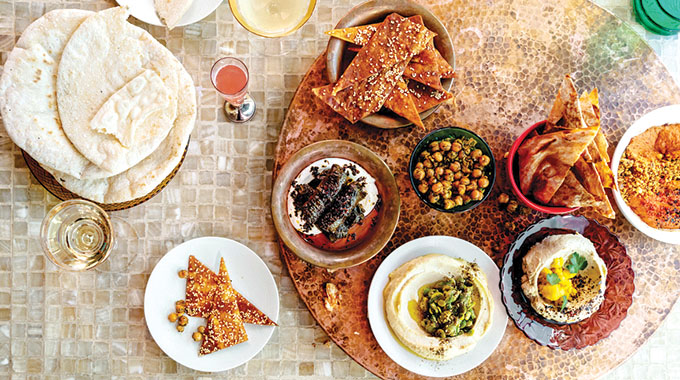 The cheese, like much of Honey Road’s menu, is locally sourced—just one of the many reasons the chef has garnered national acclaim, along with three James Beard semifinalist nominations for Best Chef, Northeast (and one for Best New Restaurant in 2018). Interestingly, when everything shuttered last spring, Tobin was surprised to realize she didn’t miss the spotlight.

“James Beard awards, and any sort of recognition—everything was just gone,” Tobin recalls. “So all I had to do was cook food and make sure that the restaurant was making enough money to get by. Awards don’t pay the bills. They are satisfying for a minute, but at the end of the day, it’s about stability, and working in a caring environment.”