Where to find authentic Texas tacos

Texans love a good taco, be it carne asada, breakfast, or barbacoa. Here's an expert's guide to some of the best in the state.

Texas is taco country. Wherever you are—be it the bayous of East Texas, the cattle country of South Texas, the lonely plains of the Panhandle, dusty West Texas, or the well-coiffed big cities—you’re never far from a good taco. The goodness begins with tortillas, is heightened by salsas, and includes, in one case, an ideal beverage accompaniment. Herewith, a guide to Texas tacos and where to find them. 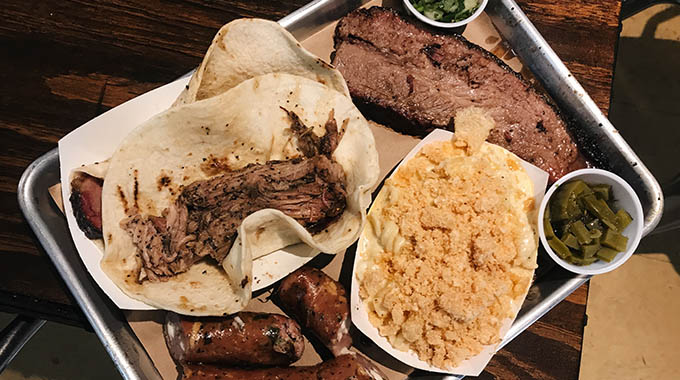 The lowdown: Although originally prepared in-ground wrapped in maguey leaves over wood burned down to coals, barbacoa de cabeza de res (beef-head barbacoa, usually cheek meat) is nowadays predominantly cooked in steamers and special ovens. Glistening knots of shredded beef bearing pops of fattiness can be seasoned with just salt and pepper and/or customized spices. But when it comes to beef barbacoa, it’s best to let the beef stand on its own.

Where to eat it: For a taste of tradition, beeline it to Brownsville and Vera’s Backyard Bar-B-Que (2404 Southmost Boulevard; 956-546-4159), where barbacoa is still cooked in an in-ground pit. Barbacoa aficionados know that San Antonio is ground zero for barbacoa—perfectly paired with a Big Red soda. If you can’t check out the Barbacoa and Big Red festival in May, visit Tommy’s Restaurant (various locations; mytommys.com; 210-558-9777), Tellez Tamales and Barbacoa Factory (1802 Bandera Road; tellez-tamales-barbacoa-factory.business.site; 210-455-0822), and 2M Smokehouse (2731 S WW White Road; 210-885-9352), where barbacoa and barbecue are reunited (pictured above).

The lowdown: Don’t confuse a barbecue taco with a barbacoa. The word barbecue comes from the Spanish barbacoa, one of the traditions incorporated to form a new style of smoking in Texas that’s centered on beef. Its most emblematic preparation is beef brisket seasoned with a dry rub and cooked in a smoker (or pit), usually with indirect fire. Texas barbecue is overwhelmingly smoky with a dry-rub bark dominated by salt and pepper accented with seasonings added by individual pit masters. Although corn tortillas can be used, in Texas, flour tortillas are preferred.

Where to eat it: Valentina’s Tex Mex BBQ in Austin (11500 Manchaca Road; 512-221-4248) is perhaps the best-known barbecue taco peddler. The staff produce hundreds of fresh dusty flour tortillas strong enough to hold the substantial fillings. The mesquite-smoked brisket isn’t overwhelmed by the smoke flavor that brands so much Texas barbecue (pictured above). Valentina’s beef stands out even against the tomatillo-serrano salsa. But the smoked chicken—topped with a bright guacamole and a surprisingly mild tomatillo-habanero salsa—is greater. In Houston, The Pit Room (1201 Richmond Avenue; 281-888-1929) makes its flour tortillas using beef tallow and garnishes its smoked chicken with whole cloves of fragrant roasted garlic, imparting a one-two punch of heat and sweetness. 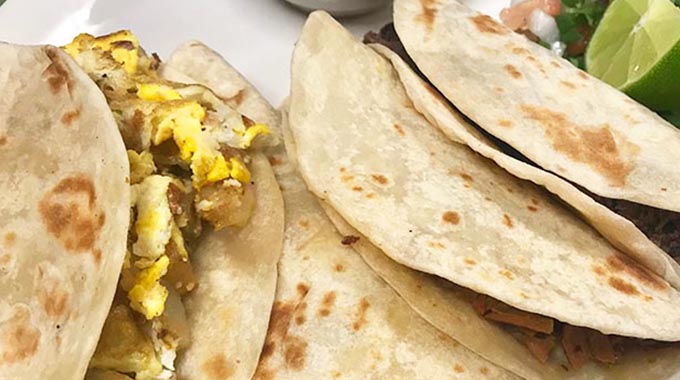 The lowdown: The breakfast taco as it’s known in Texas left the home kitchen and entered the commercial market in the mid-20th century in its home region, the Rio Grande Valley. It made its flour tortilla–based way to San Antonio, where the style was codified around a series of fluffy scrambled egg mixtures: spicy and salty chorizo; cubes of potatoes whose crispy exteriors juxtapose cushiony interiors; crunchy shards of bacon; floppy squares of ham; and silky, fatty barbacoa—cheese and refried beans optional. Fillings like machacado with eggs; shredded dried salt beef reconstituted in scrambled eggs, and kicked up a la Mexicana (pico de gallo); and sliced weenies and eggs are rarely seen outside of South Texas. The breakfast taco’s reputation as an iconic Texas style formed when it was embraced by Austinites and tourists who came to incorrectly call it the “Austin-style breakfast taco.” There have been wars fought over those words.

Where to eat it: The swarms of non-Texans who descend on Austin during SXSW will tell you to you check out Veracruz All Natural (various locations) and its migas tacos with slowly softening tortilla strips folded into scrambled eggs with tomatoes, onions, cilantro, and a lattice of Monterey jack cheese that’s topped with a slice of avocado. It’s a good taco. Book it to Laredo, a city where the breakfast taco is sometimes called a mariachi. Once there, visit Los Jacales (620 Guadalupe Street; 956-722-8470) and choose from more than 30 breakfast tacos, including migas (pictured above). But first, order the weenies and eggs. 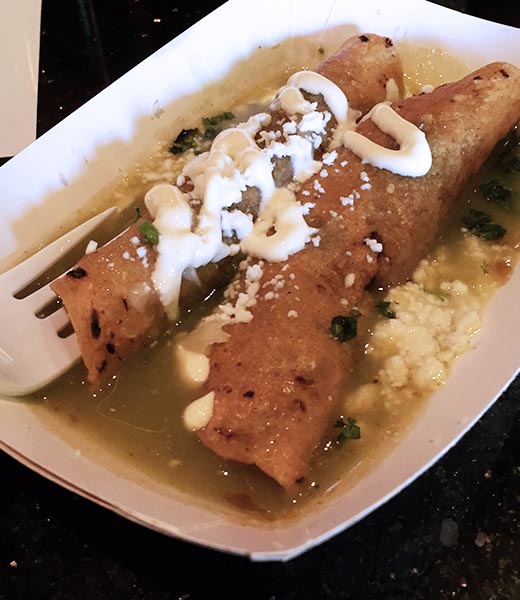 4. The Flauta or Taquito

The lowdown: Tacos can be folded and tacos can be rolled. There is perhaps no better way to consume a taco—and ensure filling retention—than rolled. Better still is a rolled and fried taco. Those we call taquitos (literally, “little tacos”) or flautas (literally, “flutes”). The latter are longer than taquitos, but both are filled with such chow as chicken, beef, beans, potatoes, or anything that won’t obliterate the tortilla or come spilling out during the frying process.

Where to eat it: Founded in 1953 in El Paso, Chico’s Tacos (4230 Alameda Avenue; 915-533-0975) specializes in flautas ahogadas—rolled and fried tacos served in baskets of thin red salsa and topped with orange cheese that are especially popular as late-night snacking. Although Chico’s Tacos is beloved by El Pasoans, try the flautas ahogadas at Tacoholics (1613 N. Zaragoza Road #201; 915-929-2592). They’re served fresh in a zippy green broth and topped with crema, queso asadero, and queso fresco. 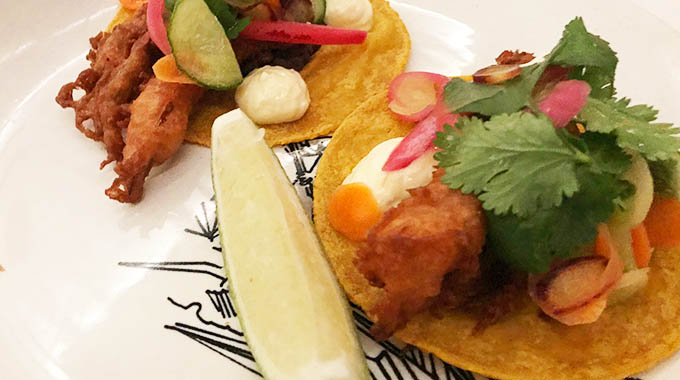 The lowdown: The taco is no longer confined to the realm of comfort food or quick street-side bite. Creative, boundary-pushing chefs are playing with its most essential ingredients, starting with the tortilla. Heirloom landrace corn—be it blue, red, white, or yellow—from Mexico is processed in the way the Aztecs processed corn to create fragrant traditional tortillas. Adjuncts like fruit purees and chile powders can then be folded into the masa to create a brilliant canvas upon which is placed all manner of fillings and garnishes. They can be classically Mexican or wildly American. Think fritters of mushrooms, silky stews of cabrito (kid goat), squid topped with dancing bonito flakes, or pastrami.

Where to eat it: First-generation Mexican-American chef Anastacia Quiñones Pittman melds her classical training and culinary heritage to create fantastical and delightful tacos at José (4931 W. Lovers Lane, Dallas; 214-891-5673). A recent special was a pork belly taco with a loose assembly of microgreens and julienned jicama surrounded by dots of coconut mole on a vibrant cilantro corn tortilla (pictured above).

6. The Old-Fashioned Crispy or Crunchy Taco 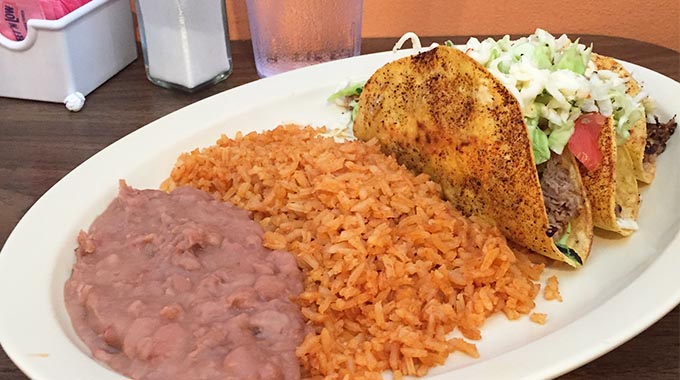 The lowdown: The recorded history of fried tacos in the United States goes back to the turn of the 20th century. In the march toward modernity, the fried taco has gotten a bad rap, thanks to the prefab taco shells favored by fast-food chains and supermarkets. They are stale, brittle imitators of the freshly fried (deep fried or on a griddle) original. The snap and crack of a freshly fried shell filled with prickly spiced ground or shredded beef are the sounds of Texas comfort food.

Where to eat it: Although crispy tacos are found across Texas, the style finds its pinnacle in El Paso at Lucy’s Restaurant (4119 N. Mesa Street; 915-544-3922), where fried shells are dusted in Lawry’s Seasoned Salt, filled with shredded beef, and capped with melted Muenster cheese (pictured above). 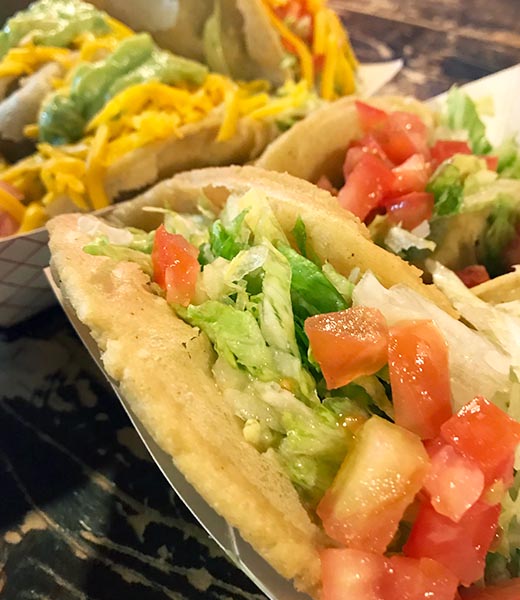 The lowdown: The puffy taco’s origin story is split between Caro’s Mexican Restaurant in the border town of Rio Grande City and Ray’s Drive Inn in San Antonio, but the taco’s formal, full name isn’t the San Antonio—style puffy taco for nothing. Unlike other fried tacos, the puffy taco begins with an uncooked corn tortilla that is deep fried and formed into the familiar shell shape via tongs, spatulas, or other handheld implements or special forms. Puffy tacos should be crispy and flaky on the outside with a chewy interior. The filling doesn’t matter as much as the filling’s liquid. Saucy fillings like carne guisada can disintegrate the bottom of the shell. Best to go classic with ground beef picadillo garnished with lettuce, chopped tomato, and shredded cheese.

Where to eat it: In San Antonio, the puffy tacos (pictured above) at Ray’s Drive Inn (822 SW 19th Street; 210-432-7171) and Henry’s Puffy Tacos (6030 Bandera Road; 210-432-7341), owned by different branches of the Lopez family, are the meccas for this taco. True to its name, Ray’s is a functioning neon-lit drive-in. Its interior is chockablock with family mementos, a wall that doubles as a religious shrine, and a 1924 Ford Model T truck in the back room. Henry’s is sleeker but no less welcoming.

The lowdown: The northern Mexican cousin of Mexico City’s tacos al pastor varies from its capital progenitor in geography, yes, but also in seasoning. Most pork taco de trompo preparations prefer smoky paprika-based marinades. Some taquerias stick with the achiote-dominant seasoning popular in Mexico City. Regardless, tacos de trompo are closely associated with the northern city of Monterrey. Immigrants from that city brought their rich, hot trompos to Houston and Dallas, where taco de trompo purveyors are identified by paintings of top-shaped trompos and Monterrey’s landmark mountain, Cerro de la Silla.

Where to eat it: In Dallas, Trompo (839 Singleton Blvd. #150; 972-809-7950), which started as a secret backyard pop-up, serves out of a brick-and-mortar on Singleton Boulevard. The regular taco de trompo is excellent, but the right order is the campechana, which combines trompo pork meat with beef in a net of melted white cheese in a flour tortilla. It’s out-of-this-world salty and punchy, especially with the ear-tingling salsa de chile de árbol. In Houston, La Macro (1040 W. Cavalcade Street; 832-618-4611) is your go-to trompo spot.

José R. Ralat is the food and drink editor of Western-lifestyle magazine Cowboys & Indians and the author of the forthcoming American Tacos: A History and Guide to the Taco Trail North of the Border (University of Texas Press, 2020). His online home is thetacotrail.com.