No one loves Los Angeles more than Danny Trejo. Born in Echo Park and raised in Pacoima, where he still lives, the 76-year-old character actor (Spy Kids, Desperado, Heat) launched his local restaurant chain, Trejo’s Tacos, in 2016. It quickly became a local institution, and his cookbook, Trejo’s Tacos: Recipes and Stories from L.A., came out this spring.

It’s a mouthwatering love letter to his hometown, where he made it big after a decade in and out of prison (including a stint at San Quentin).

“I think tacos are spelled L-O-V-E!” says Trejo. In Trejo’s Tacos, he serves up plenty of that in juicy anecdotes and 75 big-flavor recipes that he describes as “a crazy mash-up of the sometimes healthy, Mexican-adjacent, vegan-ish, always delicious food we serve at Trejo’s.”

We caught up with Trejo to dish about his new book, his favorite taco joints, and how he’ll celebrate Father’s Day.

His culinary inspiration: His mom, Alice Rivera. “I can remember her planning meals,” Trejo recalls. “She’d have these great meals at the first of the month, but going close to the end of the month, when money was running out, we’d have Out of the Cupboard this or Suck It Up and Eat It that. She was inventive!”

On what makes an L.A.-style taco unique: Nothing is off-limits, and while working on Hollywood sets Trejo learned that nearly everyone has a special dietary requirement, from gluten-free to vegan to keto. Both his cookbook and restaurant feature something for everyone at the table, from traditional favorites such as carne asada, carnitas, and barbacoa, to hearty vegan offerings filled with jackfruit, cauliflower, or mushrooms.

His favorites: “Don’t tell anyone,” he chuckles, “but I love a cauliflower taco.” He’s in good company–the late Anthony Bourdain was also a fan. Another favorite: the blackened salmon taco. “It’s delicious,” he boasts. “I never, ever liked salmon until I had one.” (Recipes for both are in the cookbook.)

His secret sauce for success: “The only way a person can reach success is having a great support system, and I thank God for the people I have supporting me,” says Trejo. “I get the credit, but it’s really the staff, the people you see every time you walk into the restaurant.”

Father’s Day fun: Trejo enjoys celebrating with three of his grown children, Danielle, Gilbert, and Danny Boy. “We all just get together, and, ‘Happy Father’s Day!’” he says. “I don’t like presents—from them. You can’t get me anything I need, so I just love having them around. They’ll cook everything and bring it over. Now, this one we might have do on Zoom.”

Beloved L.A. landmarks: The Cinerama Dome in Hollywood, Muscle Beach in Venice, and Chubby’s Automotive in Sylmar, which he touts as “one of the best mechanics around.”

Hometown hero: Trejo’s history is so intertwined with Pacoima that he’s featured in a mural by artist Levi Ponce on Mural Mile (13403 Van Nuys Boulevard, Pacoima). “When they unveiled the mural of me [in 2011], there was a ceremony and I brought my mom,” he recalls in the book. “She couldn’t help but remind me that I’d been arrested for selling drugs at the taco stand right across the way.”

Next big project: He’s the subject of the new documentary Inmate #1: The Rise of Danny Trejo (streaming digitally July 7). It traces his journey from his tough childhood, drug addiction, and prison to finding new purpose as a drug counselor and, ultimately, movie stardom (“Inmate #1” refers to his early roles).

Must-have membership: “I gotta give a shout-out to AAA. It’s saved my life numerous times. All three of my children have AAA, and their mother has AAA.”

“Carne asada is one of my all-time favorite dishes,” writes Trejo in his cookbook. “It’s easy to make, it uses affordable cuts of meat, and it’s delicious.” The marinade includes his secret ingredient: soy sauce. While not a traditional Mexican ingredient, it adds deep flavor. At Trejo’s Tacos, it is served on tacos (as shown here), in burritos, and in bowls with rice and black beans. Trejo also uses this delicious marinade to make sautéed mushrooms for a vegan version. 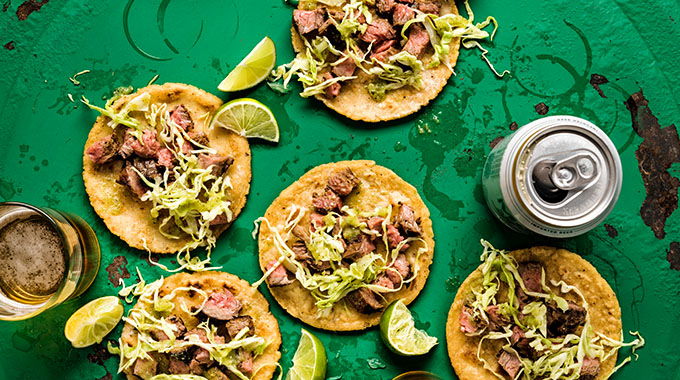 Remove steak from marinade, letting excess drip back into bag or bowl. Place steak on a platter. Set aside at room temperature for 30 minutes.

Preheat a gas or charcoal grill to medium-high.

Trejo’s guacamole plays on textures with a combo of smooth and chunky avocado, plus crunchy pistachios. 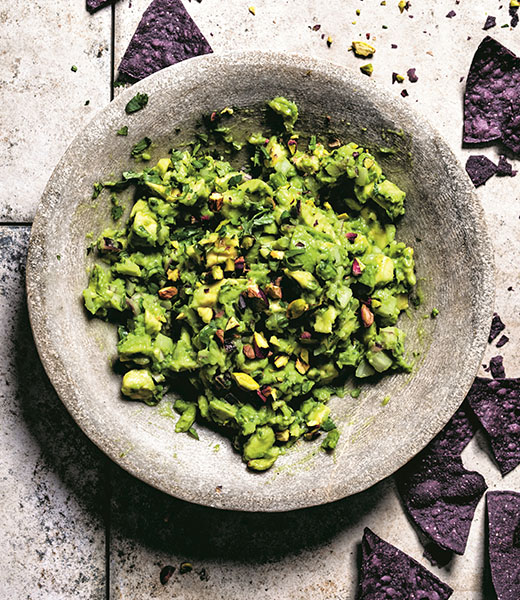 Use a spoon to scoop half of avocado flesh into a medium bowl. Smash with a fork or potato masher until mostly smooth.

This is Trejo’s summery spin on the classic Mexican cocktail. 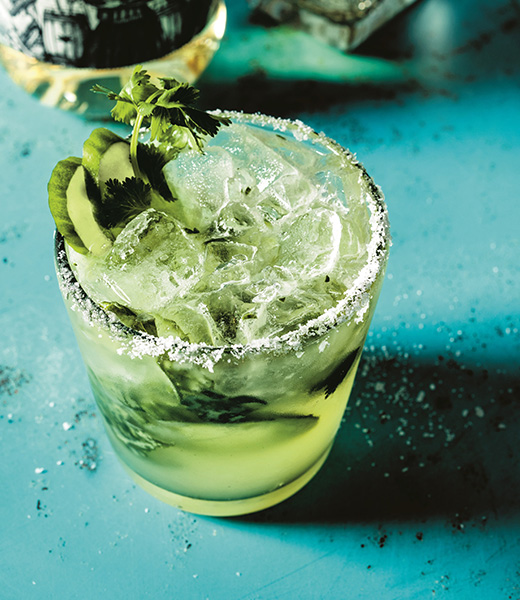 If desired, to salt rim of a glass, fill a shallow bowl with water. On a small plate, pour a circle of salt. Dip rim of a rocks glass or margarita glass in water, then dip it into salt. Set aside.

In the bottom of a cocktail shaker, muddle 4 thin cucumber slices with 1 cilantro sprig until cucumber releases most of its juices and cilantro is smashed and fragrant. Add ice, tequila, lime juice, agave syrup, and triple sec. Cover and shake vigorously for 4 seconds. Pour, including ice, into glass. Garnish with remaining (¼-inch) cucumber slice and cilantro sprig.

Reprinted with permission from Trejo’s Tacos: Recipes and Stories from L.A. Copyright © 2020 by Danny Trejo and Larchmont Hospitality Group LLC. Photographs copyright © 2020 by Ed Anderson. Published by Clarkson Potter/Publishers, an imprint of Random House, a division of Penguin Random House.