Megan Will inside her Albuquerque food truck With Love Waffles. | Photo by Gabriella Marks

Food trucks have become dynamic culinary hot spots. These mobile kitchens are places for chefs to experiment, home chefs to up their game, and budding entrepreneurs to kick off a new business.

So how do you find these “mobile” trucks? They’re often parked at breweries, parks, empty parking lots, and community events, but follow the trucks’ social media profiles to keep up with their latest landing spots.

Here are 6 food trucks worth following in New Mexico. 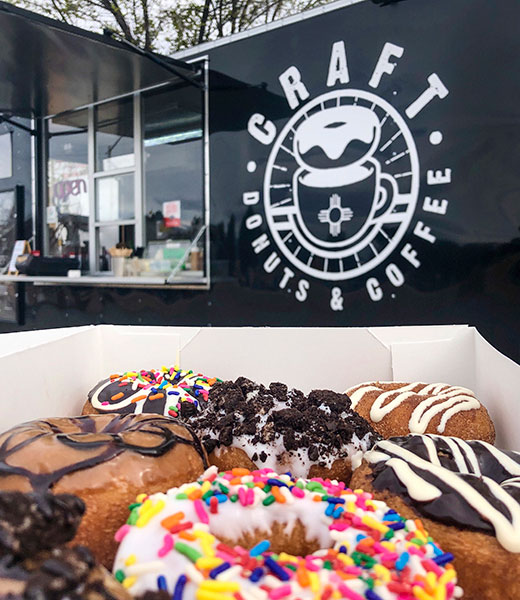 What’s better than a doughnut? A fresh, warm-out-of-the-fryer doughnut, according to Craig McGregor, who serves his creations this way. McGregor and his wife, Michelle, started a franchise doughnut business in Albuquerque in 2018, but traded the storefront for their own Santa Fe food truck 2 years later. They were determined to outshine their old doughnuts.

Customers can attest that they’ve succeeded, and the proof is in the line that trails across the parking lot at Old Santa Fe Trail and Paseo De Peralta (across the street from the New Mexico State Capitol).

It’s worth the wait for signature flavors such as cinnamon roll, a cinnamon- and sugar-covered doughnut with a vanilla drizzle; and s’mores, a chocolate-glazed doughnut with graham cracker crumbs finished with a toasted marshmallow and marshmallow drizzle. Customers can also create their own custom flavors. 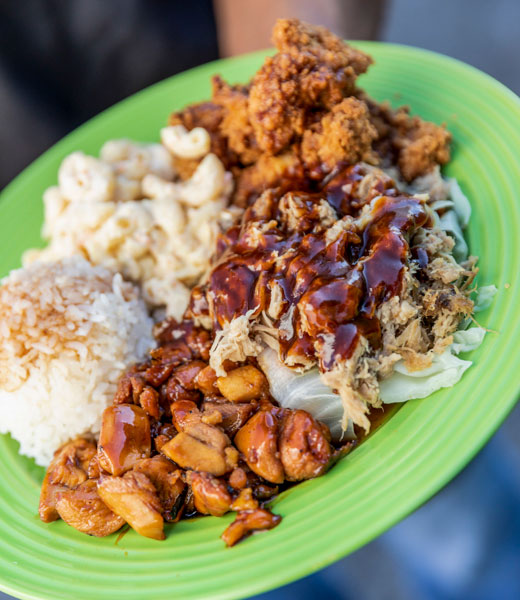 Many Duke City denizens have a Hawaiian connection, whether they were stationed in Hawai‘i as military service members or simply vacationed to the Islands and have fond memories of lū‘au meals.

James “Kimo” Strange taps into that affection with 2 food trucks and a brick-and-mortar restaurant devoted to island dishes. Strange spent 20 years in the 50th state. When his wife’s family brought him to the Land of Enchantment, he didn’t leave his favorite flavors behind.

Six years ago, Megan Will hung up her Verizon call-center headset to open With Love Waffles. The longtime baker used personal savings to launch her truck.

“It was our way to get a foot in the door as a business owner,” Will says. She originally imagined baking cupcakes, but the truck’s limited space pointed her in a different direction: waffles made on compact griddles and topped as decadently as the small cakes would have been.

The top sellers among the truck’s 8 sweet flavors are chocolate-covered strawberry and salted caramel chocolate chip. Will also introduced savory offerings, using irons like panini presses to churn out waffle-look-alike sandwiches with fillings such as turkey and green chile. 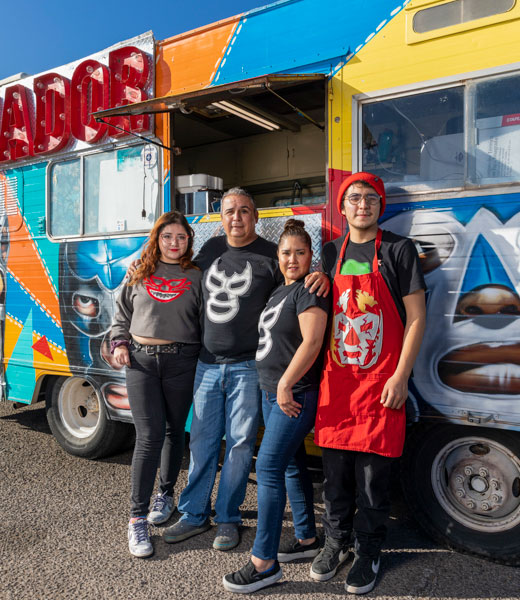 “Tenemos luchar (we have to fight),” Ivan Saenz and his best friend, Otilio Reyes, told themselves in 2013 as they pursued their dream of starting a food truck. The mantra inspired the food truck’s name, which refers to masked Mexican wrestlers.

“It took on a life of its own,” Saenz says. “Everything on the menu is named after a wrestler.”

Now, Saenz works with his wife, Sandra, and their truck is a constant at the Farmers & Crafts Market of Las Cruces. On the first Thursday of the month, it serves a free “Lucha for Hope” meal for unhoused people at Las Cruces’ transitional-living facility Camp Hope.

“We’re lucky to have what we have, and my parents taught me to share what I can,” Saenz says.

After 18 years as a radiology technologist, Carmen Medrano woke up one day and decided to open a paleta business. She dreamed of making the fruit popsicles as an homage to childhood days spent in her parents’ native Mexico eating paletas with her father.

She invested $1,000 from her pandemic Economic Impact Payments in the stock market and transformed the investment into enough money to launch her freezer-cart business. She opened the seasonal shop (May—October) in May 2021 at Taos’ commercial hub, John Dunn Shops. 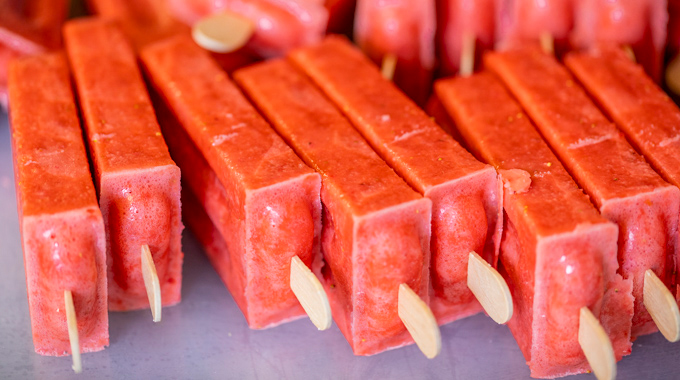 “What’s kind of neat about the cart is that everyone’s happy. If I give someone a CT scan, that’s not the case,” she jokes. 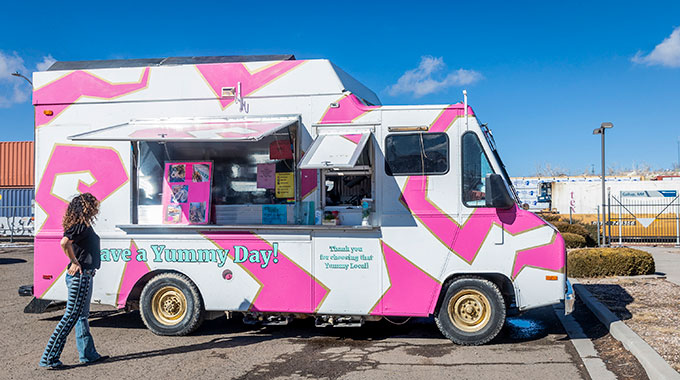 What does a singer do when she retires? For Tawnya Gomez, the answer was: start a food truck in her hometown. For 12 years, she’d traveled the world with her twin sister, Shawndey, as half of the act Dey and Nite. With her career ending, she felt lost.

“Food became therapy,” Gomez says. “I watched food shows for years, but I didn’t do anything in the kitchen. One day, I decided I was going to do something.”

Cooking became one of the loves of her life. After working in her brother’s restaurant, she opened Gallup’s only woman-owned food truck in February 2021.

The collision of hometown flavors and global travels inspires her dishes, from a tortilla burger with fresh-cut curly fries to ramen with birria (a soup with meat, in this case beef roast, cooked low and slow with chile and other spices).

There are 20 ingredients that go just in that stew, Gomez says. “I wanted to keep things really interesting, different, and unique. That’s possible with a food truck.”