A full spread of Korean food, including side dishes known as banchan, at So Gong Dong Tofu & BBQ in Montgomery, Alabama

The Korean greeting sounds almost musical as we enter So Gong Dong Tofu & BBQ on Montgomery’s east side. Our hostess leads us past tables laden with steaming stews, marinated rib eye, and shallow dishes of crisp pickled vegetables.

If I were a cartoon character, I’d be floating through the wood-paneled restaurant on wisps of tantalizing scents right now. Sharp garlic. Sizzling meats. Caramelized starches.

Nowadays, the cool kids fall in love with South Korean culture via K-pop music and binge-worthy TV dramas. (There’s even a name for this modern phenomenon, Hallyu, a.k.a. the “Korean Wave.”) But the East Asian nation followed a far more traditional path to my heart: straight through my stomach.

A brief visit to Seoul a few years ago opened my eyes to the singular flavors of Korean cuisine. And it’s this trip to Montgomery, with its sizable Korean-born community, that I hope will teach me more about the culture or, at the very least, enough etiquette to not embarrass myself at dinner.

My lessons, as it turns out, reach beyond the table to the stage, stadium, and shop floor, and remind me that a good, shared meal is a great way to learn how much you have in common with someone.

The latter sentiment happens to be a key part of the Korean ethos, Seoul-born Montgomery attorney Soo Seo Yang later assures me.

“Koreans think eating together is an important part of getting to know each other, getting closer, and building friendships,” Yang says.

Peach-colored robot arms move in quick hydraulic jerks around the frame of an SUV-in-the-making. Sparks fly with every weld. Just ahead, a self-driving delivery cart glides past our tram on its own preprogrammed tour of the cavernous building.

Whenever I ask how Montgomery—the “of all places!” rarely added but always implied—became a hotbed of hot pot, it is this futuristic 3.4-million-square-foot facility on the capital’s outskirts that gets the credit. Not bad for a factory that also turns out 1,470 vehicles a day.

South Korea-based Hyundai opened its first U.S. manufacturing plant here in 2005. And, in the nearly 2 decades since, thousands of Korean employees have either rotated through on assignment or moved here permanently with their families. With them came churches, shops, and eateries catering to Korean palates.

Visitors seeking these culinary delights must venture beyond Montgomery’s downtown tourist attractions eastward until Hangul lettering starts appearing alongside English in the signage for the shopping plazas that fringe Atlanta Highway. 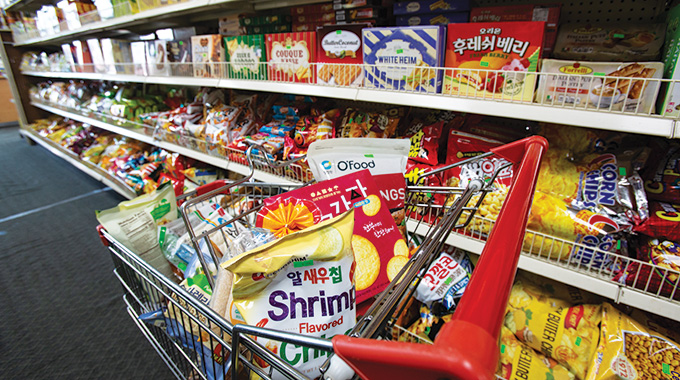 Looking for Korean groceries in Alabama? Check out Seoul Market in Montgomery.

More than half a dozen authentic restaurants, cafés, and markets (sadly, COVID shuttered the karaoke bar) offer everything from bulgogi to boba tea and feature cooking styles that span the country, from northern Seoul down to Busan’s southern shore.

The latest arrival to this panoply might also be the most on-trend, as I discover after entering the dining area at the simple fast-casual restaurant Kim Cook. 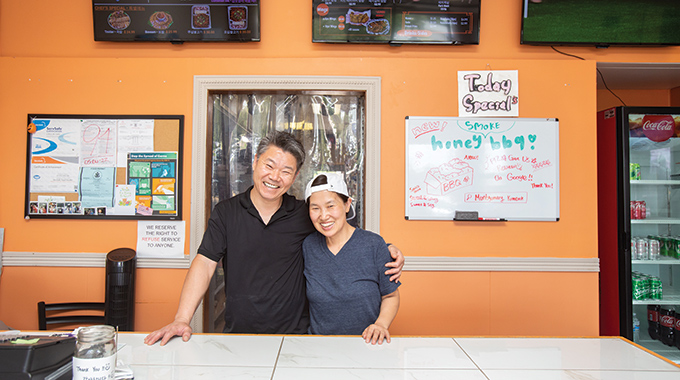 Slight and smiling, Cheol Mi Yang ushers us into a narrow kitchen for a peek at how her husband makes the house specialty: Korean-style fried chicken.

She says chicken was a special-occasion luxury when she was a kid—something your dad brought home on payday.

Today, the fried version is a beloved staple of South Korea’s drinking culture. In fact, it’s so often consumed with beer that the pairing has earned a portmanteau: chimaek (a mash-up of chikin and maekju, the words for “fried chicken” and “beer,” respectively). The chicken, with its light and crispy coating and the flavorful sauces served alongside, has grown so popular that Korean chains have started opening outposts in major U.S. cities.

Kyung Han Kim spent years perfecting his technique and his spice blend—“Korean-style fry powder,” he says with a laugh—before opening this mom-and-pop with his wife 2 years ago. Most of their customers are Korean, but Cheol Mi Yang says she enjoys the chance to get to know her American-born regulars.

“I want to share stories so we can come together, American and Korean,” she says. 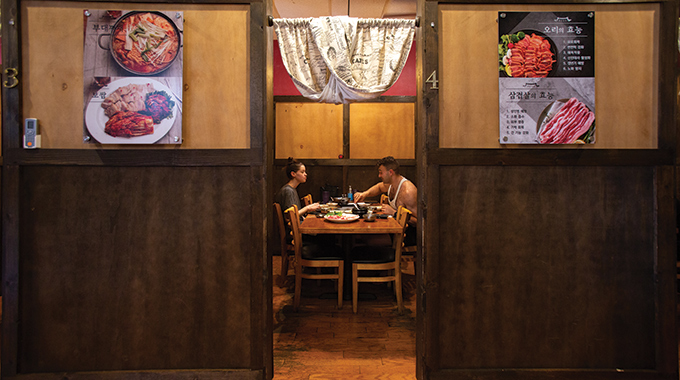 At nearby Kalim Korean BBQ, the last of the lunch crowd sizzles Wagyu short ribs and thinly shaved brisket over tabletop grills in private dining stalls. Restaurant owner Sanghyup Lee understands how this iconic do-it-yourself Korean dining experience can baffle first-timers. (My own maiden encounter in Seoul ended with the proprietor’s tweenage son cooking my entire meal for me. Embarrassing, but I went back for more later. Dinner was that good.)

Menus can be voluminous, ingredients unfamiliar, and prices a bit higher than expected, though portions are generally large.

And then there’s the multitude of delightful little dishes filled with everything from kimchi to fish cake to spicy greens that just show up on the table, sometimes before you’ve even ordered. 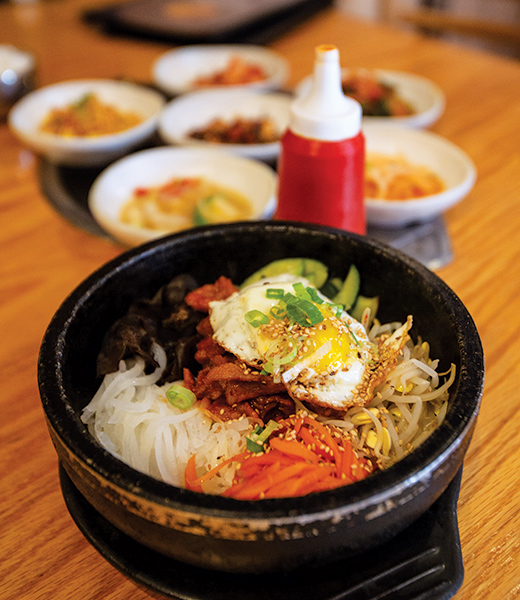 “The first time people visit, they say ‘What is this appetizer?’ ” Lee says, clarifying that the dishes, called banchan, are an ever-changing array of communal sides served before the main course. “We will teach you.”

A couple of years ago, the entrepreneur added special recommendations for non-Korean guests to his picture-heavy menu and tweaked a few traditional dishes to appeal to American tastes. Mostly, this has meant tempering spice levels. That was right around the time the Korean Wave started washing ashore in Montgomery, bringing with it a host of K-curious newcomers.

Montgomery a hotbed for Korean culture

Four fairy sisters dance together in a forest, unaware that one will soon be tragically tricked into marrying a mortal.

No, this is not the plot of a fanciful Korean television drama; it’s one of the country’s best-known folktales, The Fairy and the Lumberjack, playing out on stage at the Davis Theatre thanks to the Alabama-Korea Education & Economic Partnership (A-KEEP).

Those seeking Korean culture outside the dining room can check out one of the handful of events—including kite demonstrations, language-learning sessions, and the city’s first-ever K-pop concert—that A-KEEP hosts throughout the year.

Or they can simply wander into Riverwalk Stadium on a weekend when the Montgomery Biscuits become the Montgomery Kimchi. On those nights, the Minor League Baseball team’s name, logo, and jerseys change along with the in-stadium entertainment. Visitors might see a classical dance performed by dancers wearing traditional Korean clothing, called hanbok. Between innings, there are Korean snack–eating contests or rounds of jegi chagi, a hacky sack–like game.

There are skits, taekwondo demos, K-pop music performances, and Korean street food. Not to mention the custom-logo gear that Biscuits General Manager Mike Murphy says has flown off the shelves ever since the first Korean Heritage Night in 2021.

The festivities, designed to attract Montgomery’s Korean-born community, were developed in partnership with cultural leaders, who helped the team settle on “Kimchi” as its alter ego.

The spicy, salted fermented cabbage dish is served with just about every meal, kind of how biscuits are in the South, Murphy says.

“We wanted to expose the Korean community to Minor League Baseball, but we also wanted to introduce our Biscuits fans to Korean culture,” he says. “I’m a big believer that food is the gateway into culture.” 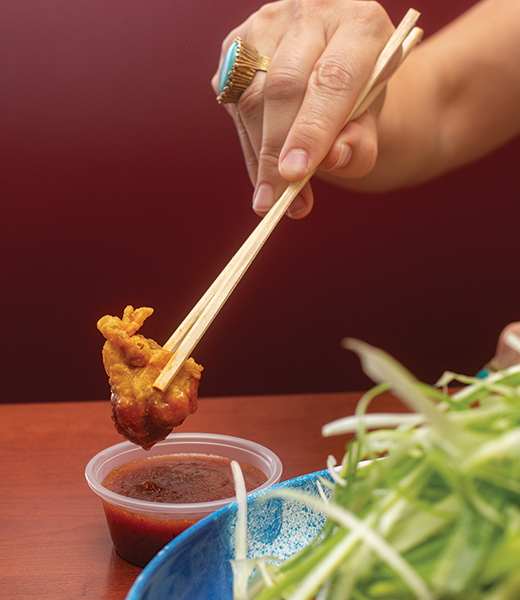 The Korean-style fried chicken from Kim Cook is coated in a special spice blend.

I figure it’s time to get a primer on table etiquette, so I call Soo Seok Yang, Korean cultural ambassador to the Biscuits and my new attorney friend.

We chat about food culture in general—beignets in my adopted city of New Orleans, the differences between Korean and American rice (we love them both)—as well as the hiatus and feared breakup of Korean boy band BTS, which made international news a few days earlier.

As he runs me through proper behavior at the dinner table, I’m struck by how many Korean mores could have come straight out of a Southern mother’s handbook.

Respect your elders. Wait to start eating until they’ve lifted their spoon or chopsticks. Show care by passing items at the table using both hands, and refill your compatriots’ glasses. Wait for them to fill yours. Dinners are family style. From the banchan to the soups to the main courses, everyone serves themselves from communal dishes.

I ask if there is a “no elbows on the table” rule. There’s not, but leaving chopsticks sticking straight up out of a bowl of rice is considered rude.

Soo Seok Yang says he often jokes with his American friends that, since he was born in South Korea, he’s a Southerner, too.

“Koreans focus on the value of family,” he says. “That’s something we also have in common with the South.”

Read more: 8 of the best food trucks in Alabama 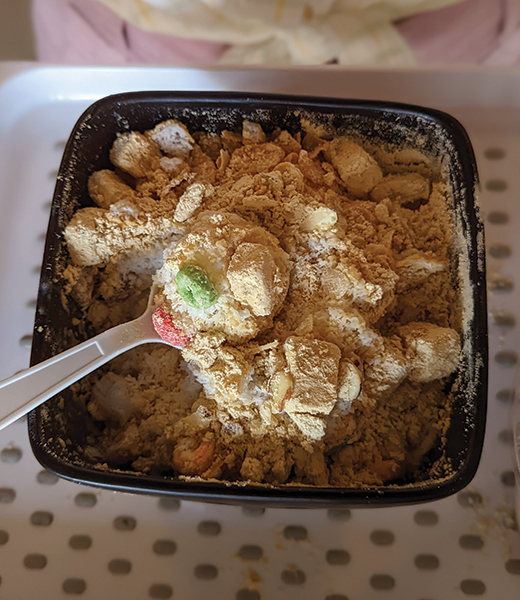 Back at So Gong Dong, my dinner companion is Brittany Payne, a fresh-faced Korean language teacher who’s agreed to walk me through a meal in real time.

She presses a small button on the wall to call for our waitress. I file that tidbit away for later.

Over haemul pajeon, crispy seafood pancakes so good I secretly rue this whole “shared plate” concept, she explains that jalmeoggeseubnida means “I will eat well,” the traditional way to thank your host at the start of a meal.

Payne browns thick slabs of pork belly—her personal fave—on our sizzling grill, then cuts it into manageable pieces with scissors and shows me how to wrap bites of meat and rice inside lettuce leaves.

As we eat, she shares that she hails from rural Georgia and fell in love with Korean culture while studying in Israel. I ask about her work at A-KEEP, which dramas I should watch, and her favorite places to shop in town.

It’s in this way that I learn the most important lesson of my Korean food journey, though it doesn’t register just yet.

“Food is very much about relationships,” she says. “For Korean people, a meal is not just to eat, it’s to be together.”

Food lover and travel guide author Jessica Fender enjoys eating her way across the South and beyond. Follow her adventures at travelerbroads.com.