Story and photographs by Jennifer Halter

As a high school history teacher, I had talked about Route 66 with my students, but it wasn’t until my 2 sons started repeatedly watching Pixar’s Cars that this fabled road found a spot on my travel bucket list.

Commissioned in 1926 and fully paved by the late 1930s, Route 66 stretched from Chicago to Los Angeles, winding its way through small towns and big cities, eventually earning the moniker the Main Street of America. Travel on the road declined as the interstate highway system grew, and Route 66 was officially decommissioned in 1985, but as countless guidebooks, travel shows, and movies attest, the Mother Road never fully left the American consciousness.

Route 66 had captured my imagination, so in September 2021, after years of planning and research, my friend Karen and I embarked on a road trip of a lifetime: We drove more than 2,000 miles from Chicago to Los Angeles using Jerry McClanahan’s turn-by-turn EZ66 Guide for Travelers to help us navigate what is left of the original Route 66.

Stopping at all the requisite roadside landmarks was part of our plan, but so was sampling as much local fare as we could. On top of the tasty dishes, we enjoyed warm hospitality, and for me, the history buff, delicious stories from the past. Over 14 days, we made 26 food stops in 8 states. Of them, here are the places to eat on Route 66, from east to west, that landed on my list of favorites.

Celebrating its 99th birthday this year, Lou Mitchell’s is just 1 mile from the Historic Route 66 BEGIN sign. Locals seated at the counter and in the booths smile as you walk in, and you may be greeted by Donna Fenton (age 92), who has worked there since 1934.

A comfortable diner with a large, double-sided breakfast and lunch menu, Lou’s is famous for its eggs—any way you like them, in fluffy jumbo omelets, egg sandwiches, and eggs Benedict (traditional, Florentine, or smoked salmon). 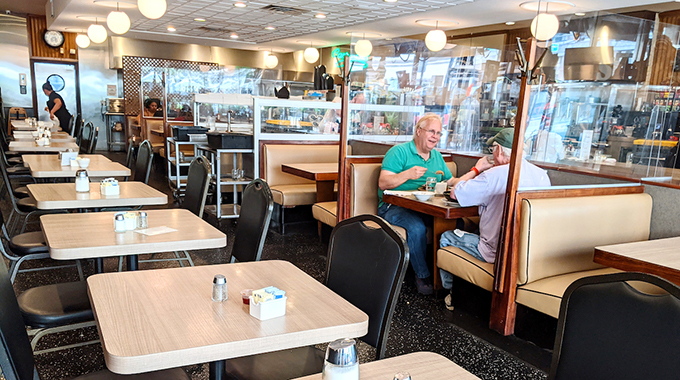 A St. Louis institution selling legendary frozen custard (richer, thicker, and creamier than ice cream), Ted Drewes opened on Route 66 in 1941. Today, crowds line up at the 12 takeout windows for concretes (frozen custard blended with mix-ins) and sundaes. Don’t be alarmed if you’re handed your concrete upside down—this is Ted’s way of proving the thickness! 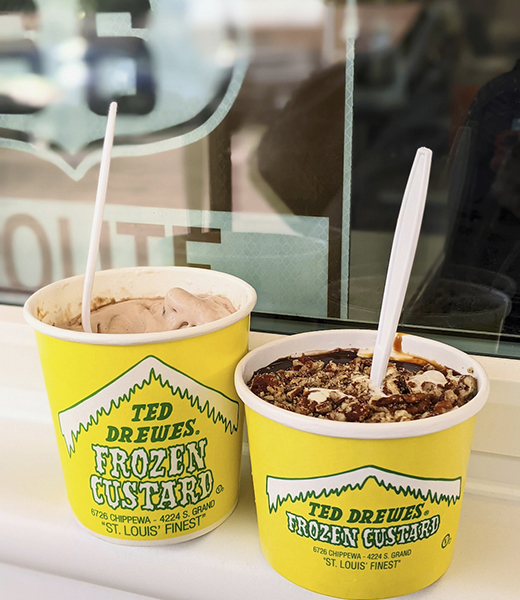 What I ate: Muddy Mississippi concrete (vanilla mixed with peanut butter, chocolate chips, and cone pieces); All Shook Up (an ode to Elvis with Reese’s Peanut Butter Cups and bananas); and the Turtle sundae (topped with hot fudge, caramel, and pecans). 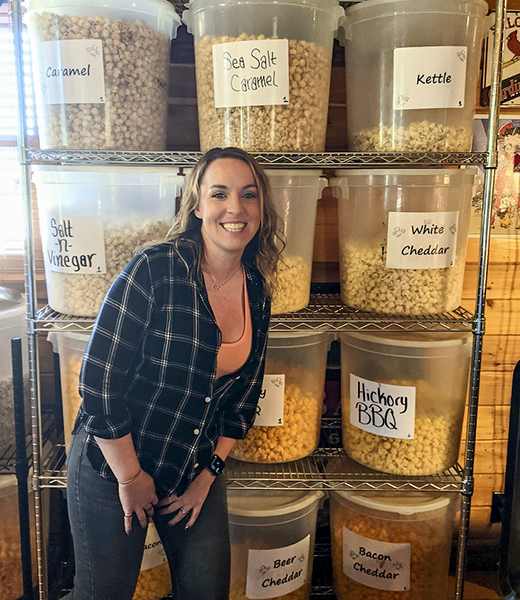 Home to the World’s Second Largest Rocking Chair, Fanning 66 Outpost is a fun roadside attraction and a great place to stock up on snacks and souvenirs—and gourmet popcorn. Owners Samantha (pictured) and Ryan Thompson bought the Outpost in 2017 and make more than 20 fresh-popped varieties, in both savory and sweet flavors, in-house daily.

What I ate: We devoured large bags of Beer Cheddar and Dark Chocolate Caramel popcorn as we continued down Route 66. As I finished the last kernel, I was comforted to know that this popcorn can be ordered online.

Consistently voted one of the best restaurants in OKC, Cheever’s is housed in a historic brick building once owned by Oklahoma Belle Cunningham, the first baby born in the city, in 1889. Belle eventually started a successful floral business, and her original display case provides a gorgeous focal point at the restaurant. The menu offers modern takes on classic American dishes and an extensive bar menu. Reservations recommended. 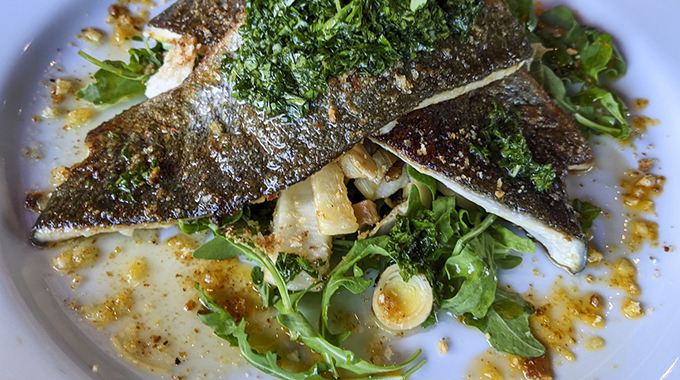 What I ate: The corn bread–crusted redfish with spicy, crispy black-eyed peas and collard greens—a perfect balance of flavors.

Recently renovated and reopened in September 2021, after being closed for decades, U Drop Inn Café is located at the Conoco Tower Station, the 1936 art deco building that inspired Ramone’s body shop in Cars. Stop in for the lunch or (early) dinner specials from the changing daily menu of classic American sandwiches and other comfort foods, such as lasagna, tortellini, or chicken soup. For dessert: sundaes, Blue Bonnet ice cream, and house-made pies.

What I ate: I slid into a booth that Elvis once sat in, and enjoyed a thick, creamy chocolate malt. It doesn’t get more Americana than that!

Read more: The top 9 things to do on a Route 66 road trip in Texas and New Mexico

The home-style cooking and excellent, friendly, small-town service showed why Flo’s V8 Café in Cars was based on this gem. Across the street is the much-photographed MIDPOINT sign.

What I ate: Tender Texas brisket served on a soft roll hit the spot after a long morning drive. Chocolate peanut butter and Bourbon chocolate chip pecan pies for dessert were heaven on earth. 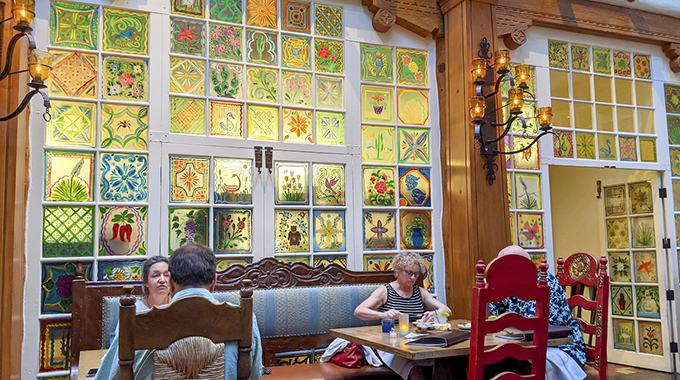 Celebrating its centennial this year, the AAA Four Diamond La Fonda on the Plaza is known for luxury accommodations and culinary excellence and dates back almost 400 years as a stopping point for people migrating west. Today, hand-painted windows in the lobby and a soothing bubbling fountain in the restaurant provide the perfect ambience for La Plazuela’s Southwestern and Mexican-influenced dishes.

What I ate: In the mood for something light, I opted for the vegetarian cauliflower “steak” with sautéed vegetables, quinoa, and almond cake (like a crab cake). Paired with a sweet apple tart with balsamic reduction, the meal burst with flavor.

Fred Harvey’s empire of hotels and eateries thrived along the Atchison, Topeka and Santa Fe railroad from the late 1870s until post–World War II. Only a handful of Harvey House buildings still exist on Route 66 (including La Fonda on the Plaza in Santa Fe, highlighted above). Luxurious La Posada Hotel, designed in 1929 by architect Mary Colter, and its Turquoise Room restaurant, with its menu of new Southwestern cuisine, maintain the Harvey legacy of superb service and food quality. 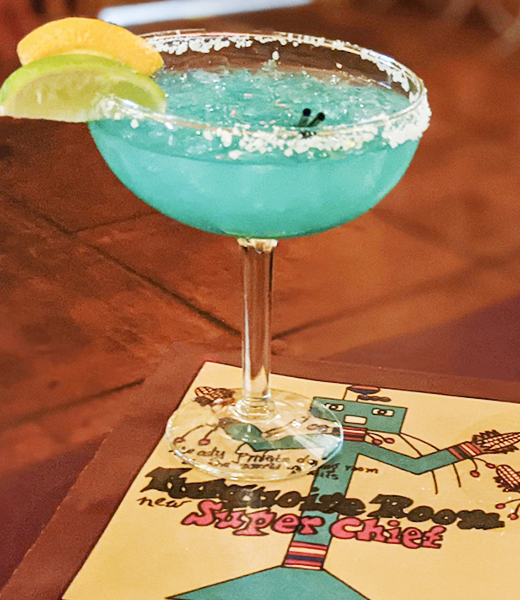 What I ate: Pork carnitas and “Fred Harvey Pie” (he was famous for his generous slices; flavors are seasonal, for us berry pie à la mode). A Turquoise Margarita (with a splash of blue curaçao) was the perfect complement for the carnitas. 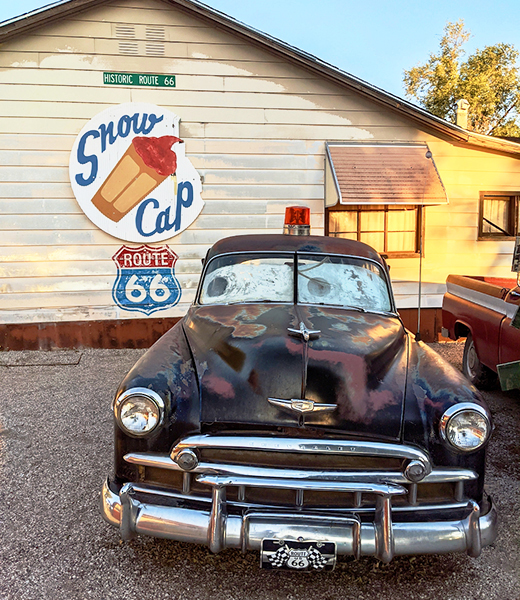 The Snow Cap Drive-In has been in the Delgadillo family since 1953. Known for delicious roadside-diner food, it’s a nostalgia-filled blast from the past. Interior walls are plastered with dollar bills left and signed by visitors (ours is below the counter). And even though I knew the staff plays pranks on customers, I fell for them anyway (watch out for flying mustard)—and left laughing.

What I ate: I chomped on the “Cheeseburger with Cheese” with chopped green chiles, french fries, and a chocolate milkshake while seated outside on the covered picnic benches.

The late-morning line was worth the wait for doughnuts from the Donut Man in Glendora, opened in 1972. The signature, seasonal (January–October) whole strawberry–stuffed doughnut was created decades ago when a local farmer supplied owner Jim Nakano with a surplus crop. Open 24 hours daily. (You can also sample Donut Man donuts at its downtown Los Angeles stall, opened in 2020 in Grand Central Market.) 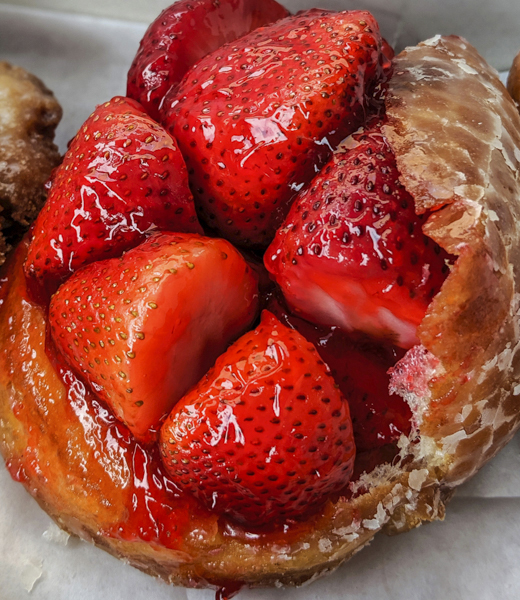 What I ate: The strawberry doughnut’s tangy, juicy strawberries mixed perfectly with the crunchy glazed doughnut. My other favorite: the extra-long chocolate glazed twist.

AAA’s Route 66 America’s Highway map includes information on roadside attractions and other points of interest along the historic route. And if you’re traveling with kids, pick up our AAA Mini Map: Route 66, packed with fun facts, games, and coloring exercises. Both are available for free to members at local branches.