Playtime aboard Symphony of the Seas

Water slides on the Symphony of the Seas. | Photo by SBW-Photo

The world's largest cruise ship offers a giant playground of games, slides, and shops for the whole family.

On Royal Caribbean International's Symphony of the Seas—the world's largest cruise ship—about a dozen recruits are on a mission. Our task: to capture mineral rights to Planet Z, located in a far-flung galaxy somewhere in the future. We are assigned to laser-tag teams (aliens vs. robots), armed with vests and phasers, and set free in an inflatable, glow-in-the-dark battlefield. Pulsing militaristic music and flashing lights add to the excitement.

As I dash around corners with determination, I quickly discover that I am no space hero. Nor am I a laser markswoman. A 12-year-old shoots me at every turn, earning points along the way. After an energetic 10 minutes, his final score is 10 times my pitiful showing. The kind kid tries to console me by pointing out that I am a larger target.

The thing is, I had a blast. On the Symphony of the Seas, not only was I defeated by a youngster, but I also got to play like one, too. 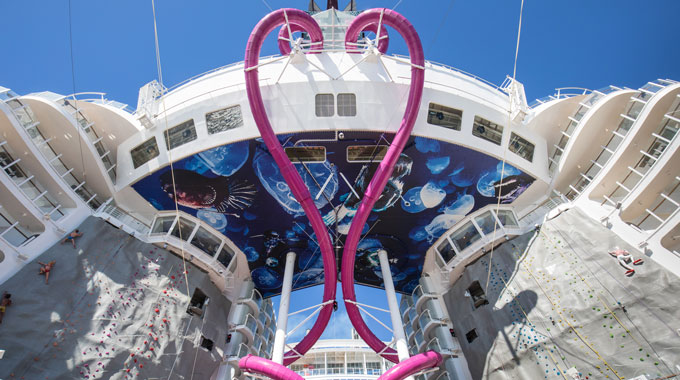 Climbing walls flank twin water slides on the Symphony of the Seas. | Photo by SBW-Photo

Being a kid again became a theme during a two-day preview cruise on this giant, activity-packed ship—large enough for seven distinct neighborhoods. This is a ship that inspires youthful wanderlust.

In the open-air Boardwalk neighborhood, I passed on a ride aboard a wood horse on a carousel to indulge in a hot dog and malt, eating while watching folks zoom by on the zip line overhead and the thrilled faces of passengers completing their plunge on the Ultimate Abyss, the tallest slide at sea, which starts 10 stories overhead.

My own adrenaline rush came in the Playmaker's Sports Bar and Arcade, not because of a big game on TV screens but because of the arcade that Royal Caribbean smartly decided to add for players of all ages. With experience from way back when, I gleefully knocked the socks off my husband in Skee-Ball.

Across the way, my eyes bulged in the Sugar Beach candy and ice cream shop, where shelves are stocked with 224 different kinds of candy, including nostalgic treats from my childhood—saltwater taffy, Atomic Fireballs, Sweetarts.

But I decided to reward my Skee-Ball victory with the calories of an adult beverage prepared by Sock 'Em, one of two bartenders (the other is Rock 'Em) in the Bionic Bar. Watching a robot arm shake and pour my rum punch, I had a flashback to the animated, futuristic TV show of my youth, The Jetsons. I was suddenly Jane Jetson, being waited on by robots.

Guests can pick from a range of restaurants. Hand-cut steaks are the calling card at the Chops Grille steakhouse, an intimate date-night spot off Central Park. Or head to the top of the ship for fresh East Coast oysters, Maryland crab cakes, and other seafood treats at the casual Hooked Seafood.

The feeling of open-eyed wonder continued at the ship's technology-driven shows, where otherworldly scenes are created in the air, underwater, and on ice.

In Flight: Dare to Dream in the Royal Theater, 3-D video and other effects simulate zero gravity with actors floating in a replica of the International Space Station. A real astronaut with space station and spacewalk experience, Clayton Anderson, consulted on the multimillion-dollar production. The show also dramatically re-creates the first lunar landing in 1969 and has a replica of a Wright Brothers plane, with a 22-foot wingspan, flying over the audience.

Royal Caribbean also pushes into new frontiers in the ship's ice-skating rink, in a show called 1977, which starts with 48 choreographed drones flying around the ice. A catch-the-jewel-thief script and more special effects take the audience on an around-the-world adventure, while an international team of professional skaters do whirls and twirls, and other feats.

In the ship's open-air AquaTheater, stunts are performed by extreme-sport athletes, who balance on various apparatuses overhead and jump off two Olympic-height high-diving boards in a show called HiRO. I was open-jawed much of the performance.

Want something more traditional? A production of the Tony Award-winning musical Hairspray! plays in the Royal Theater.

Exploring the indoor wonders of the ship, which include an Alice-themed Wonderland restaurant with oversized furniture, I found pleasant distractions among the ship's 13,347-piece contemporary art collection, with some interactive works.

While I didn't understand why anyone would mash a 1953 Volkswagen Beetle into a round sculpture, I did relate to putting my head into a purple beehive hairdo created by the artist dEmo of Spain.

Searching for the four Deep Diver sculptures around the ship is a fun pastime for adults and kids alike, and will add steps on your Fitbit.

Guests with deep pockets—about $42,000 for a seven-night sailing—can act youthful even in the comfort of their suite. The one-of-a-kind Ultimate Family Suite, with an air hockey table and a popcorn machine, is on two decks, connected with a tube slide, or stairs for the less adventuresome.

On our cruise, the sun was shining over the outdoor pool deck and towering waterslides as we sailed from Miami to the Bahamas. You could find me, however, below deck, with my laser-tag equipment. Who needs water, sun, and ocean breezes when you can battle space aliens—which I gleefully did again, with no greater success.

Fran Golden is an award-winning cruise writer for leading publications in the U.S. and internationally, and author of several books about cruising, including Frommer's guides to cruising in Alaska and on river ships.