Royal Caribbean International’s Navigator of the Seas is among the ships that sails from San Pedro. Photo courtesy Royal Carribean/Nic Morley

“You feel like you’re inside a bottle of Champagne,” said then-Solstice sommelier Randy Manansala as the ship embarked on a Mexico cruise from Los Angeles. The voyage last October marked Celebrity’s return to Mexican Riviera sailings from L.A. after more than a decade.

Solstice is one of a flotillla of ships now homeporting in Southern California. “Southern Californians are fortunate to have 3 busy home ports, making a weeklong vacation at sea or even a quick getaway so easy,” says Theresa Norton, editor in chief of Agent@Home magazine. “Now that airfares are rising, it’s more affordable to take a cruise you can drive to.”

Round-trip voyages take passengers to the Mexican Riviera, calling at ports such as Mazatlán, Puerto Vallarta, and Cabo San Lucas; up the California coast; and even to Alaska, Hawai‘i, and beyond.

Most itineraries range from 3 to 8 nights (cruises to Alaska and Hawai‘i are longer). Most fares start at under $300 per person per night, and many start at under $100. Here are some stellar ships sailing from Southern California.

You may also like: How to choose a cruise that's perfect for you 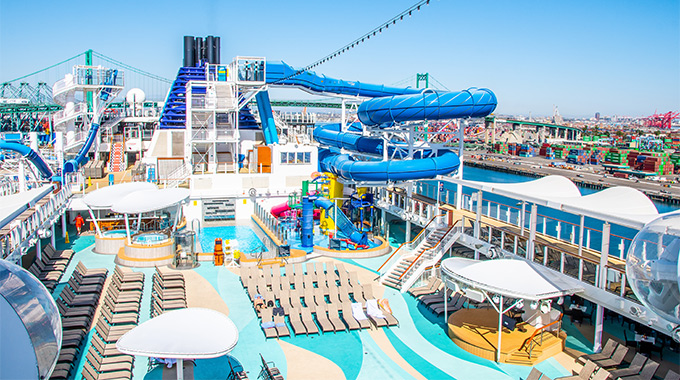 A cruise ship basks in the sun in San Pedro. Photo by Debbie Ann Powell/stock.adobe.com

Sails to: Mexico
Notable: Real grass on the outdoor Lawn Deck—great for bocce, miniature golf, and movies under the stars

Sails to: Mexico, year-round
Notable: The Blaster, the longest aqua coaster (a combo waterslide and roller coaster) at sea

Book a Navigator of the Seas cruise

Sail to: Mexico, California, and Hawai‘i
Notable: MedallionClass, an app that lets you order snacks, keep track of traveling companions, and even unlock your cabin door

Sails to: Mexico
Notable: A pipe organ sculpture in the atrium and guitars signed by Queen, Keith Richards, and Eric Clapton

In the 1930s, steam-powered riverboats like the Delta King carried guests on overnight trips from San Francisco to Sacramento. Travelers can once again ply those waters—and beyond.

Beginning in February, American Cruise Lines offers 7-night cruises round-trip from San Francisco on the Sacramento, San Joaquin, and Napa rivers. Passengers can browse Stockton’s farmstands, take a fresh look at Napa Valley wine country, and explore Old Sacramento, where the Delta King is now a hotel. Fares for the 190-passenger American Jazz start at about $800 per person per night.