By Elizabeth Harryman and Paul Lasley

As our boat entered the Cannelton Lock and Dam on the Ohio River near Cannelton, Indiana, people stopped their cars along the riverside road and got out to take pictures. Four decks high and painted white with two black smokestacks, a red paddle wheel, and trim resembling a wedding cake, the American Queen Steamboat Company’s (AQSC) American Duchess is surely among the most glamorous boats to use this lock; its normal traffic mostly consists of commercial craft moving cargo.

As the boat emerged from the chamber, having risen to meet the water level on the dam’s upstream side, we saw a row of cars along the side of the lock. Families with young kids waved to us, and we waved back. One couple sat on the back of a bright-red pickup.

“We want to come, too!” the laughing, blond-haired woman called.

“Wish you could come aboard,” we shouted back, waving until the boat carried us out of sight. 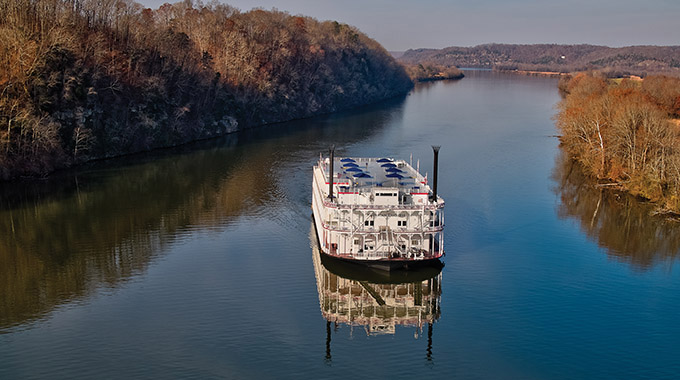 The celebratory shouts and warm greetings probably had little to do with the pandemic, but in a funny way, they made us feel as though we were finally being welcomed back out into the world. Like most Americans, we’d been home since March 2020, following COVID-19 protocols and venturing out only for necessities. But travel is our passion and our work, so in April, both of us fully vaccinated, we embarked on the American Duchess. At that time, the Centers for Disease Control and Prevention had instituted the Framework for Conditional Sail Order that effectively barred large cruise ships from sailing from U.S. ports, but the ban didn’t apply to vessels carrying 250 people or fewer. American Duchess has a passenger capacity of 166 and a crew of about 70.

We might have been reluctant to board a boat with more than 100 strangers, were it not for the enhanced health and safety protocols that AQSC had instituted. (And like everything, they’re evolving. As of July 1, the company had mostly dropped its mask rule and was requiring all crewmembers and passengers to be vaccinated before embarking.) We were eager to see what cruising would be like in this new environment.

We started to find out on the first night of the seven-night Ohio River cruise, which took us downriver from Cincinnati to Owensboro, Kentucky, and back upriver to Louisville. 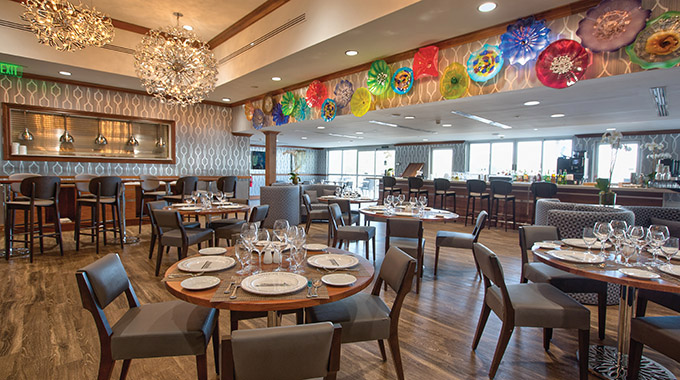 In the Grand Dining Room, which has crystal chandeliers and floor-to-ceiling windows, we met our dinner companions, a couple from Pittsburgh. Because we were about to eat, we could remove our masks. As we did so, we all smiled at one another. What a feeling of liberation!

That feeling permeated the vessel. “We’ve been living like hermits for more than a year,” said Pat Henke from Wisconsin, as she stood on the front deck with her husband, Bill, a retired Army officer. “This is freedom.”

Initially, we feared that the protocols, which included social distancing when possible and masks in public spaces when distancing wasn’t possible, might dampen cruising’s fun. But we found that we could still chat with people, attend lectures and shows, and make new friends; we just did it while wearing masks. A few passengers expressed frustration about the protocols, but most, including us, appreciated them. In the bubble that the cruise line created, we felt safer than when shopping at our local grocery store.

At the bubble’s center was the boat itself. While the outside resembles a 19th-century–style riverboat, the inside projects a modern sensibility. Glass art in strong reds, yellows, and aquas adorns the public rooms and complements abstract paintings that pulse with intense colors. Staircases with wrought-iron banisters anchor the Grand Lobby and Bar, an atrium-like central gathering place, and hallway paintings depict riverboats of yore. 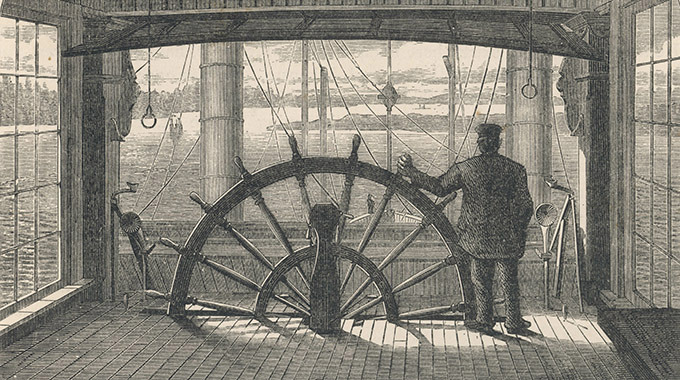 We learned more about those boats in daily presentations by “Riverlorian” Bobby Durham. “The Ohio River was the country’s first superhighway,” he said. “It helped move America west.” In the early 1800s, the steamboat revolutionized river traffic, and by the 1830s, there were more than 1,200 steamboats on the Mississippi River System, which includes the Ohio. Packet boats carried cargo, mail, and passengers on steam-powered vessels with side or rear paddle wheels. “Riverboats built the U.S. into the superpower it became,” Durham said.

Rollin’ on the Ohio River 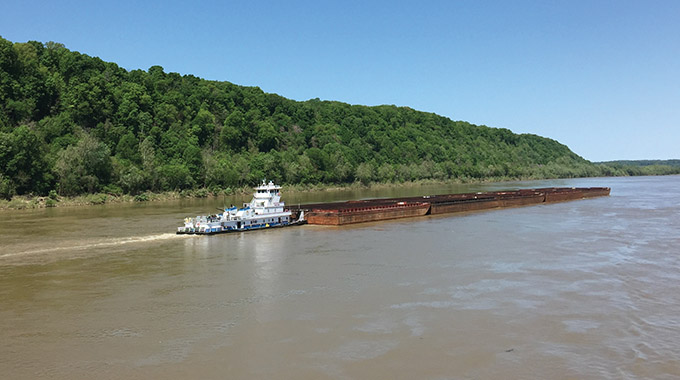 A tugboat pushes empty barges on the Ohio River. | Photo by Paul Lasley

Other forms of propulsion replaced the paddle wheels, but the Ohio still hums with commerce. One of the joys of cruising this waterway is seeing towboats pushing—not pulling—eight to 10 barges, or “tows,” filled with cargo such as coal and grain. To us, this steady passage symbolized the grit and determination of the American spirit.

We’d sit on our cabin’s veranda or in rocking chairs out on deck, listening to the gentle whoosh of the water as the boat progressed. The Ohio curves and meanders, and we never tired of wondering what vista lay around the next bend.

Trees, green with the vibrancy of spring, lined the banks, and houses topped hillsides. We passed farms with plowed cropland and small towns with steepled churches. A woman fished from the shoreline. Sometimes the current was so swift it spawned small whitecaps; other times it was calm enough to reflect the light of the full moon.

Towns and cities along the route revealed more. COVID-19 protocols extended to shore excursions: The company operates private motorcoaches, driven by crew members, and everyone underwent temperature checks when leaving and returning to the boat. 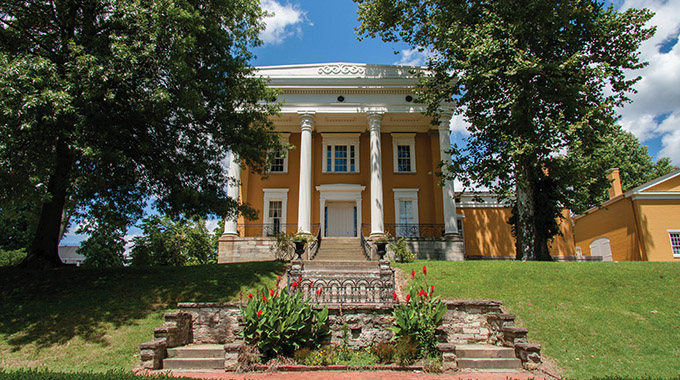 In Madison, Indiana, flowering trees graced the lawns of pristinely preserved homes reflecting Federalist, Greek Revival, and Italianate styles. More than 133 blocks of 19th- and early 20th-century structures make up the National Historic Landmark District. How had so many period buildings survived, we wondered. “Madison went through an economic downturn,” said John Nyberg, executive director of the History Center. “People were too poor to tear them down.”

In Owensboro, Kentucky, at the Bluegrass Music Hall of Fame and Museum, exhibits and live performances explore this country music genre distinguished by lightning-fast tempos and high-pitched vocals. Bill Monroe, called the Father of Bluegrass, was born near Owensboro, and the museum honors him and other greats who’ve captured in their music the soul of working men and women.

In Louisville, we toured the Kentucky Derby Museum at Churchill Downs. Through interactive exhibits (you can have your photo taken with a horse statue in the Winning Circle) the museum celebrates the iconic competition, which started in 1875. The Black Heritage in Racing section reveals that the winning jockey of that first race was Oliver Lewis, a Black man, and that 15 of the first 28 Derbys were won by horses with Black jockeys. 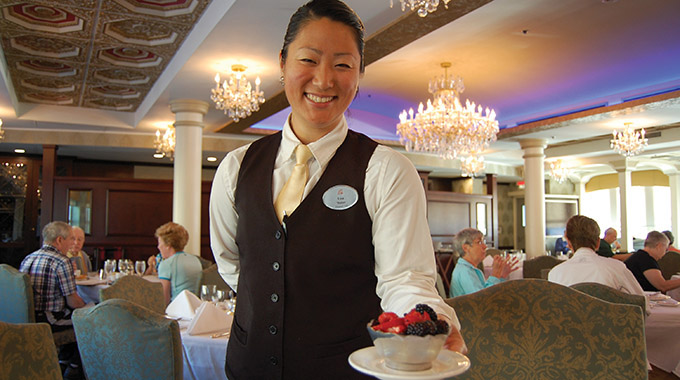 Life aboard the Duchess revolved around meals and music. Food reflected modern twists on Southern and Midwestern classics, such as blackened grouper with coconut rice–black bean pilaf. In the casual River Club and Terrace, COVID protocols required that crew members serve buffet choices. At breakfast, we’d point to biscuits and gravy, and cups of mixed berries—or have omelets made to order.

Lunches offered surprises, such as green beans cooked in Coca-Cola, delicious pulled-pork sandwiches, and sugar cream pie. The crew were unfailingly professional: Our server Karl always remembered our coffee and tea, and Jordan, manning the Perks snack bar, turned the serving of soft ice cream into an art form. They all seemed as happy as the passengers to be back on the water. 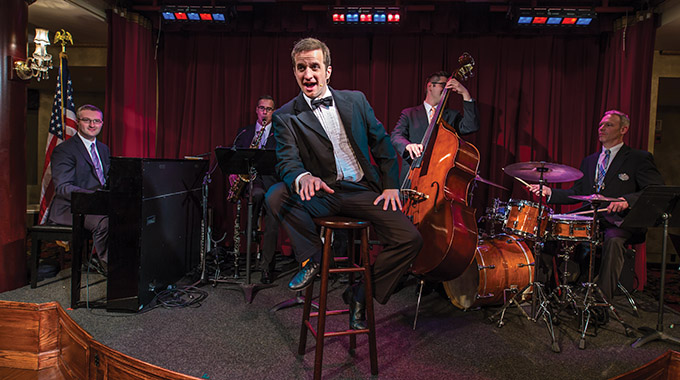 At night, two men and two women performed with the boat’s band in cabaret-style shows brimming with ingenuity. In “Mr. Bojangles,” one man sang the words while another told the poignant tale in dance. When all four sang “Getting to Know You,” they used American Sign Language to imbue the song with a deeper meaning. And “Riverlorian” Durham doubled as an entertainer a couple of nights, playing several instruments and singing with a soulful timbre reminiscent of Willie Nelson.

Passengers also made their own entertainment. When the band played its repertoire of jazz, bluegrass, and standards, couples spontaneously got up to dance. One afternoon, John DeLuca, a retired attorney who is blind, and his wife, Sandy, a retired schoolteacher who is visually impaired, gave an impromptu concert in the Lincoln Library. With John on guitar and Sandy on mandolin, they sang ballads and folk songs in harmony so sweet it moved us to tears.

Their victory over adversity seemed to echo much of what we’d observed on the cruise. As we awoke to sunrise before disembarking, we reflected on what the river had taught us. We live in a challenging time, but all along our journey, we’d seen how courage, creativity, and perseverance had triumphed. Like the river, we’d keep moving on.

The American Queen Steamboat Company offers cruises on the Ohio, Mississippi, Tennessee, Cumberland, Columbia, and Snake rivers. Fares start at about $200 per person per night, including meals, alcoholic and non-alcoholic beverages, onboard activities, and shore excursions, plus a one-night pre-cruise hotel stay and transfer to the boat before embarkation. A great perk is the wash-and-fold laundry service with one-day—or even same-day—turnaround. 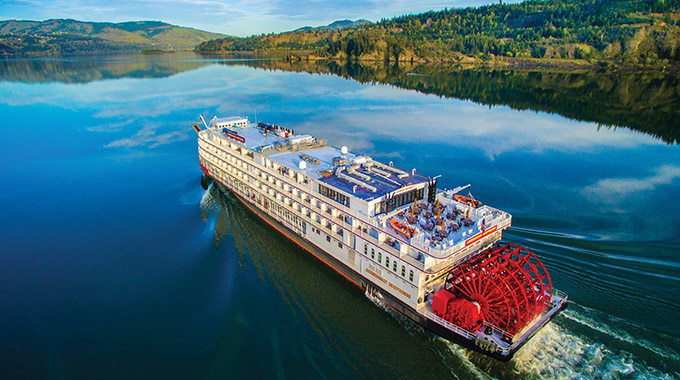 Native Americans plied these waters some 12,000 years ago. In 1805, Merriwether Lewis and William Clark and the Corps of Discovery arrived. Today, you can trace those and other sagas as the American Queen Steamboat Company’s American Empress takes you cruising on the Columbia and Snake rivers.

Itineraries unveil the Pacific Northwest’s scenic grandeur and usher you through massive locks that dwarf the vessel and enable the transfer of more than a billion dollars’ worth of wheat exports each year. Aboard, you’ll dine on cuisine inspired by the region.

Music and history highlight cruises on the Lower Mississippi River between New Orleans (pictured) and Memphis. American Queen Steamboat Company riverboats take you into the South’s past and reveal insights relevant to today. From ancient times, when Native Americans traded up and down the river in canoes, to the days of Mark Twain, whose years as a steamboat pilot inspired some of his best-loved tales, to the present, the Mississippi has a storied place in the American psyche.

At Vicksburg, Mississippi, learn about the Civil War campaign that changed the course of the conflict when the city fell to Union forces in 1863. At Nottoway in Louisiana, tour the Greek Revival and Italianate–style former plantation mansion built in 1859 by enslaved Blacks. And at Natchez, Mississippi, which was established in 1716 and is the oldest city on the river, tour the Natchez Museum of African American History and Culture and gain a broader picture of those and later times.

At least one free excursion is included in each port, and at some ports, you can buy a premium excursion. In Natchez, for example, you can meet celebrity chef Regina Charboneau and learn how to make her famous biscuits or other specialties—and taste them. And at the Port of the Mississippi Delta, you can opt for a visit to the B.B. King Museum and Delta Interpretive Center or a tour that includes the Grammy Museum Mississippi. Music permeates these cruises—onboard and off. The boat’s show band will serenade you with jazz, blues, and other genres as you experience the majesty of the Mississippi.

Paul Lasley and Elizabeth Harryman have cruised the Rhine in Germany, the Rhône in France, and the Huangpu in China. Tune in to their global podcasts at ontravel.com.

Plus, save up to $4,000 per booking and receive $200 onboard credit per person on select 2021 and 2022 American Queen Steamboat Company® and Victory Cruise Line® sailings.