AAA and the Automobile Club of Southern California’s Automotive Research Center (ARC) continually test a variety of automotive technologies and products to provide members with the information they need to make informed buying decisions and keep their vehicles in top running condition. The following are descriptions of some of AAA’s recent projects.

Many newer vehicles come factory-equipped with advanced driver-ssistance systems (ADAS) features such as automatic emergency braking (AEB), adaptive cruise control (ACC), and rear cross-traffic warning (RCTW)—that utilize a variety of sensors to help prevent drivers from tailgating or making unsafe lane changes. Experts classify this nascent technology according to 6 levels, from 0 (no automation) to 5 (full automation). As discussed below, Level 2 refers to partial automation, wherein the vehicle can perform steering and acceleration functions while the driver monitors all tasks and can take control at any time.

In a 2020 study, AAA researchers determined that during 4,000 miles of real-world driving, 5 different 2019 and 2020 vehicles equipped with sophisticated Level 2 ADAS—for example, features such as automatic emergency braking, adaptive cruise control, and rear cross-traffic warning—experienced some type of problem, on average, every 8 miles of driving. Most errors involved lane-departure or lane-positioning issues. Vehicles also came too close to other vehicles or to guard rails, collided with simulated disabled vehicles, or had their ADAS disengage with little notice.

Based on this testing, AAA concluded that current advanced safety systems are far from completely reliable and therefore are potentially dangerous, especially if drivers rely on them heavily. AAA stated that current ADAS “are in the early stages of their development” and “are not capable of sustained vehicle operation without constant driver supervision.” It urged automakers to perform more thorough testing on the systems and not to release them until they perform their functions correctly.

Vehicle safety systems aren’t typically evaluated in a real-world environment, which often includes fog, rain, or snow. To more closely model actual driving conditions, AAA and the ARC simulated moderate to heavy rainfall in closed-course testing to see how it would affect the performance of automatic emergency braking (AEB) and lane-keeping assistance (LKA).

The results were disconcerting but not surprising: Both systems struggled to perform as designed. Vehicles equipped with AEB traveling at 25 mph crashed into a stopped vehicle 17% of the time; at 35 mph, 33% of the time. LKA didn’t fare any better; test vehicles went out of their lanes 69% of the time.

The conclusion? Real-world ADAS performance is greatly affected by differing driving scenarios, road conditions, weather, and vehicle design. Therefore it’s essential that drivers know how their ADAS features operate—and what their limitations are. AAA urges drivers to read their vehicle owner’s manual and to remember that the purpose of ADAS is to assist in the driving process, not to be a substitute for an engaged, alert driver. 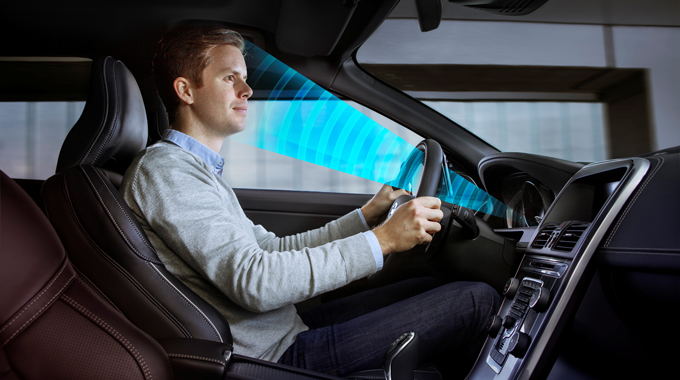 Automakers install driver-monitoring systems to ensure that drivers are alert and paying attention to the task of driving. | Photo courtesy Volvo

The term active driver assistance (ADA) refers to advanced driver-assistance features that assist a driver in the actual driving of the car; that affect acceleration, braking, and steering. These include ACC, AEB, and LKA.

ADA systems are widely available in some of the newest vehicles on the market today. They’re often termed semiautonomous because they can control vehicle acceleration, braking, and steering. This has led some drivers to believe that their vehicles can drive themselves, and that it’s okay for them to do other things—look at the scenery, send texts, or play video games, for example. Unfortunately, nothing could be further from the truth. These Level 2 automated systems require the presence of a driver fully in control of the vehicle.

To prevent abuse of these systems and distracted driving, automakers have developed driver-monitoring systems that consist of an interior camera facing the driver, sensors in the steering wheel, or both. If drivers show signs of distraction, the systems alert them to reengage with the task of driving via visual and/or audible signals, which are repeated if drivers don’t respond to them.

But do these systems work? And do some work better than others? To find out, AAA drove 4 popular vehicles with these systems: a Cadillac Escalade with Super Cruise; a Subaru Forester with EyeSight and DriverFocus; a Hyundai Santa Fe with Highway Driving Assist; and a Tesla Model 3 with Autopilot. The first 2 have camera systems and steering-wheel input; the latter 2 have only the steering-wheel systems.

The vehicles were driven on a 24-mile loop on a limited-access Southern California toll road. Vehicles moved at or near the 65-mph speed limit. Each of the simulated driver-distraction tests lasted 10 minutes, and drivers employed 3 methods:

Researchers found that camera-based systems were much more effective than steering-wheel-only systems, alerting distracted drivers much sooner and more persistently in all the above scenarios in both daytime and nighttime driving conditions.

Furthermore, the percentage of time that test drivers were engaged in driving was about 5 times greater for camera-based systems than for steering-wheel systems.

There was, however, one major drawback: Even after issuing multiple warnings about distracted driving, neither type of system disabled the vehicles’ semiautonomous safety features and forced drivers to take the wheel and pay attention to their driving.

As a result of the testing, AAA recommends that automakers equip vehicles with camera-based driver-monitoring systems in addition to steering-wheel systems. However, because both types of systems were prone to being deceived, AAA concluded that the systems require more development and refinement to prevent driver distraction and misuse. 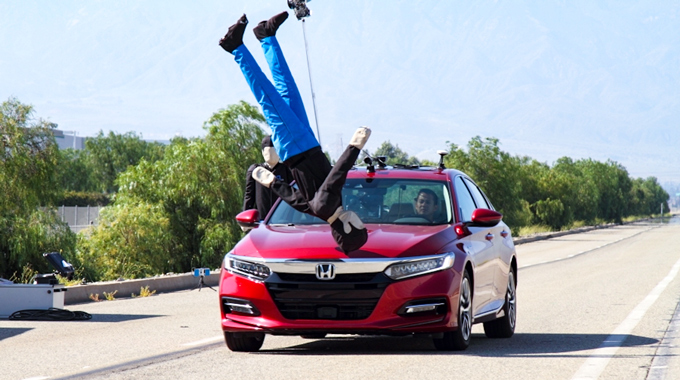 Pedestrian fatalities are on the rise, from a low of 4,109 in 2009 to more than 6,700 in 2020—more than a 60% increase. In response, many automakers have added pedestrian detection to their automatic emergency braking features. Unfortunately, the current systems generally aren’t up to the task.

AAA, in collaboration with the ARC, tested pedestrian-detection systems on 4 different 2019 vehicles to determine their effectiveness. The systems performed best in the least demanding situation—a simulated adult crossing in front of a vehicle traveling at 20 mph in daylight. Even in this near-ideal circumstance, the systems avoided a collision just 40% of the time; at 30 mph, most systems struck the pedestrian replica. 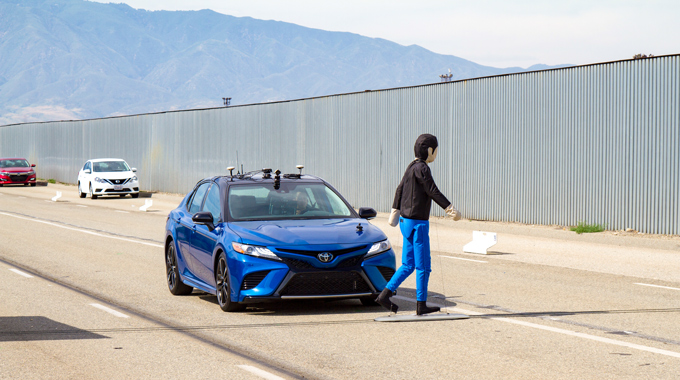 When the test simulated a child darting from between parked cars or a vehicle turning right onto a street with a pedestrian crossing it at the same time, the results were much worse: At best, vehicles avoided the targets a mere 20% of the time. In the right-turn scenario, all vehicles hit the pedestrian target. Most discouraging, all the systems allowed the vehicle to strike the simulated adult pedestrian at night, when 75% of pedestrian fatalities occur.

Until pedestrian-detection systems improve, AAA recommends that drivers not rely on them to avoid a crash, and that they use extra caution when driving at night.

Adaptive driving beam (ADB) headlights, which have been available in Europe for years, have finally been approved for use in the U.S. They illuminate the road much better than the best systems presently available in the U.S., without creating glare for oncoming drivers (note the blacked-out section of the roadway). | Photo by AAA

The principal challenge in headlight design is to make headlights bright enough so that drivers can see and avoid objects in the road, and at the same time not create glare for other drivers in both directions. To see whether current U.S. headlight systems meet this challenge, AAA compared headlight performance on U.S. cars with that of adaptive driving beam (ADB) headlights found on some European and Canadian cars.

With ADB headlights, high beams are always on; glare is prevented by creating “shadowed” areas that avoid producing glare for other drivers. Some ADB headlights consist of multiple LEDs; those that would create glare turn off when cars approach from the opposite direction.

After testing ADB lighting on a closed course and on public roadways, AAA concluded that in real-world traffic conditions, ADB lighting systems provided as much as an 86% increase in roadway lighting. At the same time, they reduced glare as effectively as automatic high beams.

Unfortunately, until now ADB lighting hasn’t been permitted on vehicles sold in the U.S. because of outdated regulations specifying that headlights must have dedicated low and high beams.

But that’s about to change, thanks to a provision in the Biden administration’s infrastructure bill, which allows adaptive driving beam headlights and requires the testing of headlight-system effectiveness. It could take up to 2 years for the new regulations to become effective.

In the meantime, AAA recommends that motorists use high beams whenever it’s safe to do so while driving on unlit roadways. They should also carefully monitor their speed so they can stop in time to avoid hitting pedestrians, animals, or other objects on the roadway.

For more information on the limitations of headlight performance, go to the AAA Newsroom.

Excerpted and adapted from the AAA Car Guide, available in hard copy at AAA branches.