Wayne Clark didn’t always listen to his father, but there’s one time he’s glad he did.

At age 16, he and his dad spent $25 for a 1940 Chevy Special De Luxe Business Coupe. “My father and I noticed the Chevy sitting in a parking space in Ipswich, Massachusetts,” says Clark, now 73. “It had been sitting for quite a while. We found the owner and asked if she would sell it. She said she’d recently been sideswiped and would never drive it again, so she’d sell it for $20. My dad gave her $25, and we bought a new fan belt and drove it away. I still have the receipt.”

In the mid-1960s, Clark drove his two sisters to school in the Chevy for almost three years. But after his freshman year in college, the car sat in storage for more than 40 years until he had the time and money to restore it. 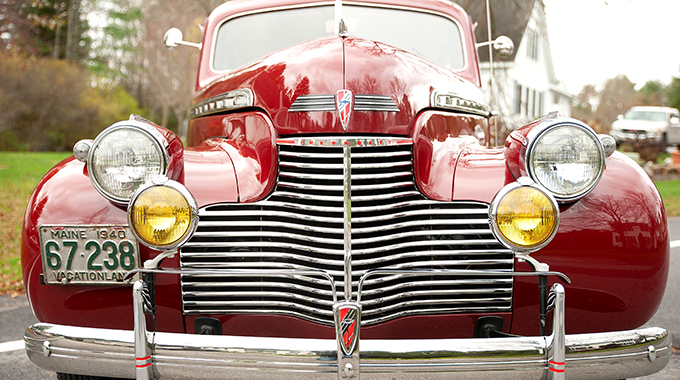 About 10 years ago, Autolab in Portland did a complete body-off restoration, including a new transmission, new brakes, and engine work. Clark spent thousands of dollars bringing the car back to life.

The country was starting to come out of the Great Depression in 1940 when Chevy unveiled a remodeled Master line, including the top-end Special De Luxe. It came with such amenities as dual windshield wipers and an illuminated clock. All for a sticker price of about $720.

Clark has two daughters who he says will probably inherit the car. No doubt they’ll be happy they listened to their dad too.