Understanding AVs: What they are, how they work, & what the future holds

Without question, the hottest topic in the automotive world today is autonomous vehicles (AVs).

They represent the biggest change in passenger vehicles since the invention of the internal combustion engine, and their development and adoption can change our lives in an unprecedented way. Self-driving cars could make travel safer by removing human error, more comfortable by removing the need for human attention, and faster by allowing artificial intelligence to coordinate traffic.

But AVs may also create unintended consequences that could disrupt our lives. Before they can become widespread, manufacturers will need to overcome many technical hurdles. And along the way, there will be ethical dilemmas and policy challenges.

So what exactly are AVs? How do they work? How will we know when a car is truly self-driving, and how close are we to that? And most importantly, what could this future look like?

What is an autonomous vehicle?

An autonomous vehicle is one in which at least some aspects of a safety-critical control function (such as steering, acceleration, or braking) occur without direct driver input. AVs use a variety of technologies, including radar, lidar, ultrasonic sensors, GPS, cameras, and artificial intelligence to navigate surroundings. 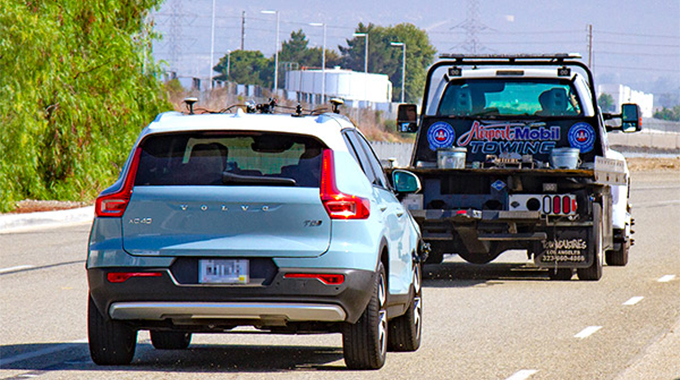 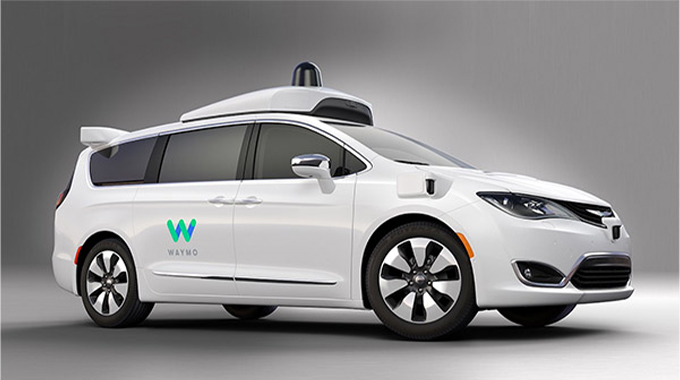 How do autonomous vehicles work? 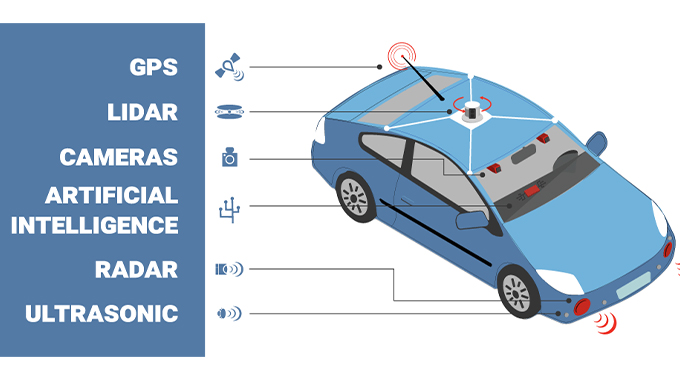 Unlike human drivers with their eyes, ears, and brains, autonomous cars rely on mechanical sensors and advanced artificially intelligent programming. No single sensor can properly detect the full range of scenarios a car might encounter, so current experimental AVs use a suite of sensors:

What companies are working on driverless cars?

An increasing number of vehicles are available with advanced driver-assistance systems such as adaptive cruise control, automatic emergency braking, blind-spot monitoring, and lane-keeping assist. These systems are the foundation for the levels of autonomy described above. AV is developing at an unprecedented rate, and not just among automakers. Tech firms and software companies including Apple, Intel, and Waymo are involved, as are automotive suppliers like Bosch and Delphi and ride-hailing companies like Uber and Lyft.

Some of these companies, such as Lyft, are developing software and partnering with a variety of automakers that will build the AVs. Others are building their own complete cars—hardware and software. Many companies are investing in or forming what might seem on the surface as unlikely connections, such as Waymo's partnership with Avis.

Hundreds of companies are getting in on the action, for one simple reason: If AVs are genuinely the future of mobility, there's a potential multibillion-dollar market for this technology, which could also change our models regarding transportation and mobility.

It's likely that the first areas where we'll see autonomous technology are commercial ventures, such as food and package delivery, ride-hailing services, various types of trucking, shuttle transportation around university and industrial campuses, and so on, rather than private passenger cars. Here's what's happening with some major players in the AV arena: 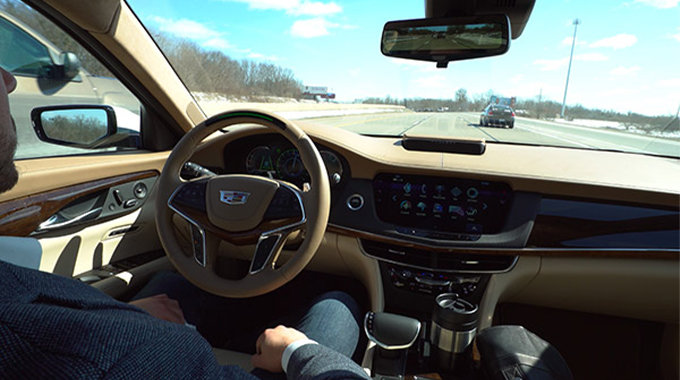 Cadillac's Super Cruise, which debuted in 2017 on the automaker's CT6 sedan, provides hands-free driving on divided highways without intersections, but still requires the driver to pay attention.

Chevrolet
In 2017, GM began testing third-generation autonomous Chevrolet Bolt EVs in San Francisco, Detroit, and Phoenix, with New York City following in early 2018—the first in the state for what will likely be a Level 4 autonomous unit. Bolt AVs are equipped with dozens of cameras and sensors, including a roof rack with lidar and laser units that spin to give a 360-degree view of the environment. The company plans to deploy autonomous Bolts for use in ride-sharing operations (as part of its Maven brand).

Ford
Ford has stated that it will bring autonomous vehicles to market in 2021. This would be a Level 4 vehicle without a steering wheel, accelerator, or brake pedal, for use in a ride-hailing service.

Nissan
ProPilot Assist is Nissan's semi-autonomous approach to help make stop-and-go driving bearable by controlling steering, acceleration, and braking. With ProPilot Assist, the driver's hands need to remain on the wheel. It's available on the 2018 Rogue SUV and Leaf EV.

Lyft
In mid-2017, ride-hailing company Lyft announced plans to build its own autonomous technology in a new lab in Palo Alto, California. The software and hardware can be integrated into a variety of vehicles; to that end, Lyft has formed partnerships with a number of companies, including General Motors, nuTonomy, Jaguar Land Rover, and Waymo. Company spokespeople have said they expect AVs to provide the majority of the company's rides in the next 5 years.

Uber & Volvo
In late 2017, Uber announced a deal to purchase 24,000 of Volvo's XC90 crossover SUVs. Intended for use in fully driverless operations (a.k.a. "robotaxis"), the 24,000 XC90s are slated to be delivered to Uber between 2019 and 2021. Volvo will equip the vehicles with its proprietary autonomous technology and sensors, and Uber will outfit the vehicles with its self-driving software. The vehicles will have the redundancy required for Level 4 autonomy.

Waymo
In spring 2017, Waymo expanded its fleet of autonomous Chrysler Pacifica plug-in hybrids by 500 additional vehicles, bringing the total to 600. It's now testing its AVs in 6 states. The extra minivans were necessary for Waymo's test project in the Phoenix area, which made rides available to the public, first with an onboard driver, then in driverless vehicles in November 2017.

When could the future of autonomous vehicles look like?

Many of the companies working on AVs expect to have limited numbers of Level 4 cars capable of autonomously driving without human input in limited situations by the early 2020s. Many technological hurdles remain, such as driving in low-visibility weather, and it will take years of research before Level 5 vehicles capable of handling all situations could become available. One estimate comes from Loup Ventures, a venture capital firm that predicts growing demand for Level 4 and Level 5 AVs starting in 2028 and that most vehicles sold will be Level 4 or Level 5 AVs by the mid-2030s.1

AVs may bring substantial positive changes to vehicle travel. According to the National Highway Traffic Safety Administration, human error is responsible for 94% of traffic collisions, which over the past decade have resulted, on average, in about 35,000 deaths, millions of injuries, and billions of dollars in economic losses annually. Experts estimate that connected and automated vehicles could prevent up to 80% of vehicle crashes, particularly those caused by distraction, inattention, and drunken or drugged driving.

Similarly, AVs could make travel more comfortable, productive, and efficient. As one example, the traffic from Americans' daily commutes could be reduced through AVs traveling safely and predictably a few feet from one another at relatively uniform speeds. People could find themselves enjoying free time to relax, sleep, get a jump on the day's activities, or talk with other passengers on their way to work. New ride-sharing business models will likely emerge, too, giving segments of the population—minors, people with disabilities, people who don't have a driver's license, and those who don't have a car—increased mobility options.

Today: Human motorists must leave gaps between cars because they can't predict other drivers' moves and need time to react.

Future: AVs that can respond at high speeds and communicate with one another might travel closer together, alleviating congestion.

There will be plenty of ethical and regulatory issues to resolve along the way. If an AV crashes, injuring or killing passengers, who will be responsible—the AV owner or the manufacturer? In addition, millions of Americans use vehicles to make their living—delivery services, small-business owners, repair services, and bus, truck, and taxi drivers. How will those industries evolve as AVs enter the commercial space? How do AVs and human-piloted cars share the road? How does an AV signal its intent to a human driver or pedestrian? Will AVs alleviate or increase traffic?

As AV develops, AAA urges the gradual, safe introduction of these technologies to ensure that American drivers are informed, prepared, and comfortable with this unprecedented shift in mobility.

The AAA Car Guide is a detailed guidebook to green vehicles and includes information on the partially automated safety systems that are available on current models.