Using voice commands while driving feels safe. After all, your eyes are on the road, and your hands are on the wheel. But according to AAA’s latest research, you’re more distracted than you think.

A joint study from the AAA Foundation for Traffic Safety and University of Utah confirms that voice-activated technologies can cause significant distractions and impair driving. After testing the in-vehicle information systems of 10 cars and the voice assistants of 3 smartphones, researchers found that all of them were cognitively taxing enough to be potentially dangerous—even up to 27 seconds after drivers finished using them.

What did AAA’s study look at?

This study was the third phase of the AAA Foundation for Traffic Safety’s comprehensive investigation of cognitive distraction behind the wheel. Such distractions can slow reaction times and cause inattention blindness, resulting in drivers unknowingly missing objects on the road, such as stop signs, pedestrians, or other cars, which can lead to a crash.Participants were asked to perform various voice-activated tasks while driving 2015-model cars, such as selecting music, placing a phone call, or dictating a text message. Cameras and other monitoring equipment measured the level of distraction drivers experienced while using the systems in question. Among other things, researchers wanted to see how various voice-based systems affect mental focus, as designs differ significantly between manufacturers.

What the study found

After observing how drivers performed using the 10 vehicle models and 3 smartphone systems, researchers assigned a distraction rating to each one based on the category scale used to rate hurricane strength. Category 1, the lowest, indicates a level of distraction similar to listening to the radio, while Category 5 corresponds to a highly challenging, scientific test designed to overload a driver’s attention.

All the voice systems tested were found to be Category 2 or higher, and 10 of 13 were Category 3 or higher. AAA considers any distraction at or above Category 2 to be unsafe; none of the systems met this threshold. Researchers found a direct link between system intuitiveness and distraction: As systems became more complex, took longer to use, or had more errors, drivers became more distracted. 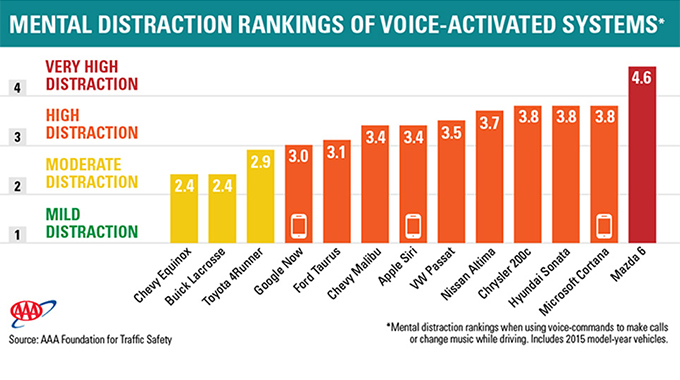 Drivers were tested before and after a week-long practice period. The second tests showed that practice reduced but did not eliminate the mental distraction caused by these systems. Interactions that were easy on the first day were still easy; difficult ones remained relatively difficult.

Another, more surprising discovery was that drivers weren’t just distracted while carrying out voice-command tasks. Cognitive focus was impaired even after tasks were completed: The most distracting systems left drivers with unsafe levels of distraction for up to 27 seconds, while even the least distracting systems still left drivers shortchanged for at least 15 seconds. That means drivers who use voice commands at “safe” times while stopped in traffic or at a red light may still be distracted when they start moving.

It’s concerning that hands-free systems, often seen as a way to avoid distracted driving, can contribute to it instead. The good news is that there are ways to make systems less distracting. While no devices met AAA’s threshold for safety, the three Category 2 systems demonstrated that good design decisions can make voice-command tasks less distracting. 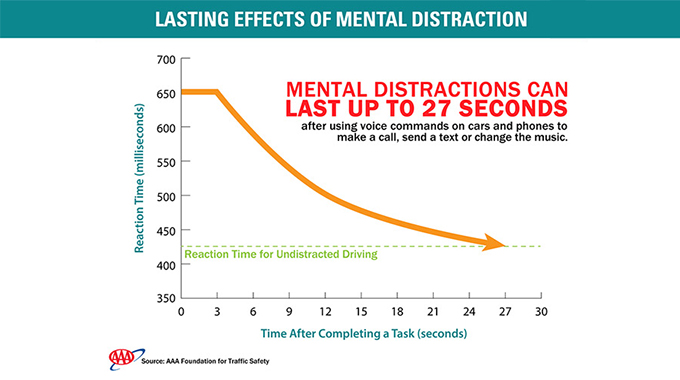 Design systems that are simple yet robust. Flexible, error-free systems tend to have lower workloads than rigid, error-prone ones, so usability testing to better understand users’ needs and minimize system errors has the potential to reduce cognitive demands on drivers.

Strive for Category 1 systems. More research is needed to determine if mental distraction levels from voice-assistant technology can be reduced to levels on par with listening to the radio or an audiobook.

Be aware of the risks. The high mental workloads observed in this study should serve as a caution that voice-based interactions in the car can still be very distracting, even if doesn’t necessarily feel like it

Weigh whether a voice-activated task is necessary. Drivers should stick to commands involved in operating the vehicle, such as adjusting the radio or climate controls. Social media, text messaging, and email can wait.

Reconsider voice-activated tasks when stopped. Since the research found that distractions from hands-free systems can persist up to 27 seconds after completion, drivers shouldn’t assume that using them while stopped is safe. Distraction may linger even once they begin driving again.