Universal Studios Hollywood ushered in the next generation of the Jurassic saga with the grand opening of Jurassic World – The Ride and a star-studded event that included franchise stars Chris Pratt, Bryce Dallas Howard, and Blue the Velociraptor.

Jurassic World – The Ride combines new breeds of terrifying dinosaurs with old favorites in an immersive adventure that will delight and thrill visitors.

What's new on the ride

The centerpiece of the new attraction is undoubtedly the Mosasaurus in her aquarium. The dinosaur makes a terrifying entrance snatching a giant shark in mid-swim with one bite. Movie magic goes a long way in upping the stakes and heart rates when the Mosasaurus cracks the tank’s glass. Fair warning: When the Mosasaurus thrashes in her tank, no part of the boat is safe from the splash zone.

Your adventure takes a turn for the terrifying when you enter Predator Cove and find the entrance to the Indominus Rex enclosure bent wide open. With Dallas Howard reprising her role, Claire Dearing appears onscreen asking riders to remain calm. Admittedly hard to do as red warning messages flash and you’re surrounded by blood-splattered walls etched deep with claw marks from the escaped Indominus Rex.

As you begin your final ascent into the tropical Tyrannosaurus Rex Kingdom, Pratt flickers on multiple screens as Owen Grady advising riders to remain calm and not make any sudden movements – a fitting precursor as a ceiling panel gives way and a dinosaur slides precariously close to your boat. As you round the final corner of the tour and get a glimpse of the Indominus Rex, the familiar Tyrannosaurus Rex makes a roaring appearance just as you’re plunged into an 85-foot drop.

Things to see & do after surviving the ride

See dinosaurs up close, including the Raptor Encounter

If the dinosaurs on the ride weren’t close enough for you, come face-to-face with Blue the Velociraptor at the all-new Raptor Encounter. Careful though, Blue gets snappy when she’s hungry. 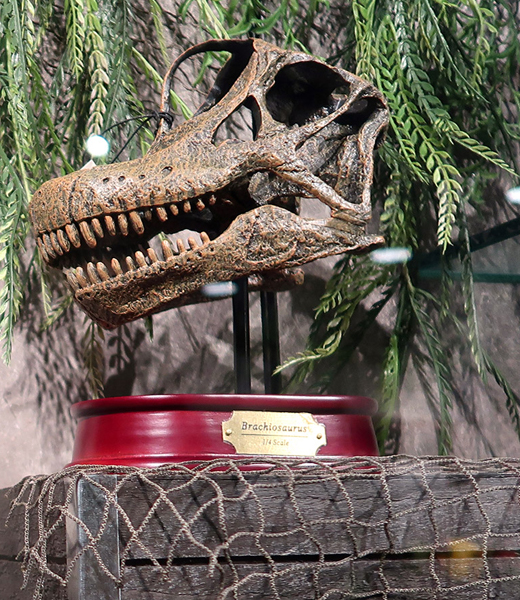 After surviving Jurassic Park – The Ride, stop at Jurassic Outfitters for a limited-edition souvenir from your adventure. Commemorate your time in this prehistoric land with memorabilia from the franchise or new, one-of-a-kind dinosaur sculptures and custom-made collectibles.

Your visit isn’t complete without a taste of the new Costa Rican-inspired menu at Jurassic Café, influenced by the setting of the Jurassic World movies. Cuisine options include citrus-glazed chicken with rice and beans, crispy green lettuce rolls with shrimp, chorizo and potato empanadas with nublar sauce, the Isla burger with plantain chips, and mojo jackfruit with rice and beans. Finish your culinary tour with a tres leches cake or a chocolate macadamia nut cake for dessert.

Ready to be thrilled by Jurassic World – The Ride?