8 tips for visiting Disneyland with kids

A visit to Disneyland Resort is a memorable occasion for kids—and a potentially stressful one for their parents.

Keeping pint-sized adventurers rested, fed, and in good spirits can be a challenge, especially at a destination like Disneyland where there's so much to see and do. Thankfully, the park is easier to experience than ever thanks to an excellent mobile app and conveniences around the resort. AAA social media manager Jessica S. and her daughter, Charlie, recently visited Disneyland Park and Disney California Adventure Park; Jessica shares tips that made the visit easier for both of them. 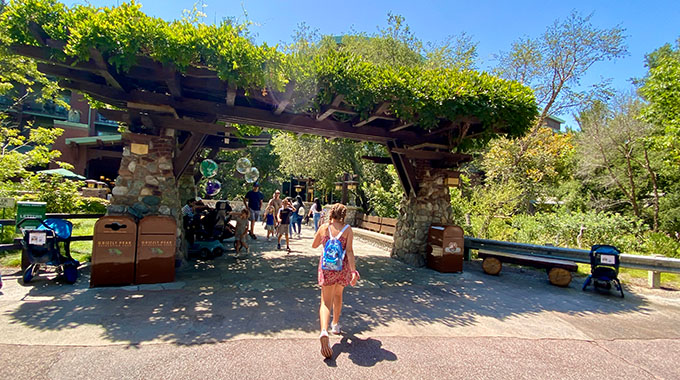 1. Stay at a Disneyland hotel

There are lots of reasons to check into a room right at Disneyland Resort, but Jessica says one of the biggest benefits is that it helps keep everyone rested and in good spirits. That's because all 3 of the on-property hotels—the Disneyland Hotel, Disney's Paradise Pier Hotel, and Disney's Grand Californian Hotel & Spa—are a short walk or monorail ride from the theme parks, so families can stop in for a rest.

"Taking breaks throughout the day is great, especially when it's hot," says Jessica. "There are fridges for cold snacks, and nice showers too if you get sweaty." She stayed at the Grand Californian, where visitors can exit directly into Disney California Adventure Park, skipping the main gate for maximum convenience. That makes it easy to stop by for a nap, a change of clothes, a diaper change—whatever you might need during a day in the park. 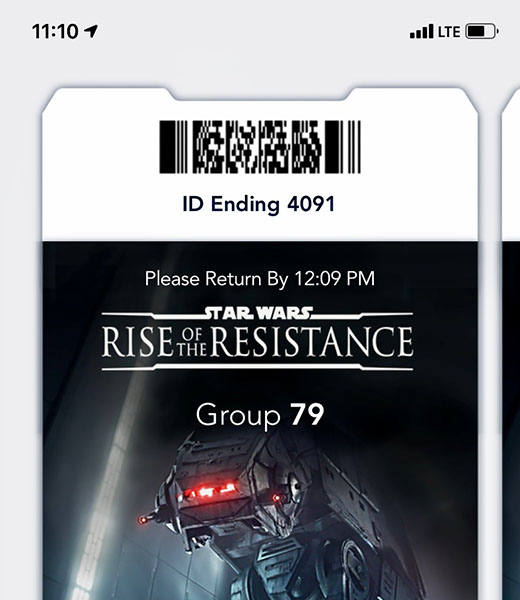 You'll need to join the virtual queue on the Disneyland app to ride Star Wars: Rise of the Resistance.

2. Join the virtual queue on the Disneyland app

The official Disneyland mobile app is a must-have for any visit, and the ability to join virtual queues is a big reason why. While only a few rides use the system, they're big-name ones that kids won't want to miss, including Star Wars: Rise of the Resistance and Web Slingers: A Spider-Man Adventure.

There are 2 windows each day to get into the virtual queue: 7 a.m. and noon. "It's important to make sure you've already linked everyone's tickets in the app beforehand," Jessica says. "You can only make a reservation for people who have a ticket in the app, and spots go quickly."

Once you have a reservation, you'll be assigned a boarding group with an estimated time that you need to be at the ride. Keep an eye on that time, as it may change throughout the day; you'll only be instructed to head to the ride once it's your boarding group's turn. 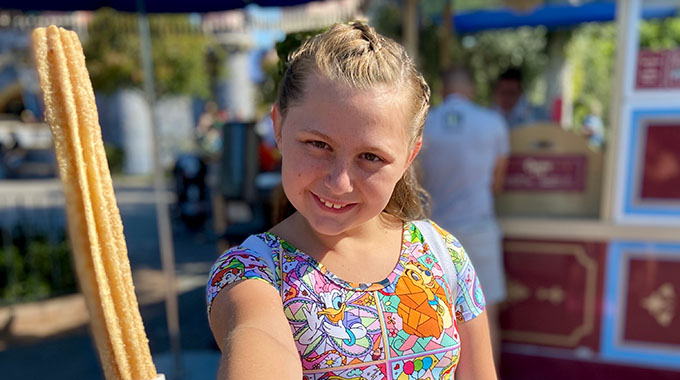 Mobile ordering on the Disneyland app makes it easy to pick up snacks like churros.

3. Order food on the mobile app, too

The Disneyland app is also handy for dining in the parks. If the kids are getting hungry, order ahead on the app and pick up food on the go. It's also easy to make reservations for sit-down meals through the app. Jessica recommends finding the name of where you'd like to go ahead of time, as restaurants are listed in the app by name: "There's options for take-out or sit-down, and for finding food by the type you're hungry for or how close it is."

"What's really convenient is that you can order a snack after getting off a ride or doing something else and by the time you get to the food, it's already ready," Jessica says. "You pick a window of time that you'll arrive, so you can adjust depending on how far away you are." 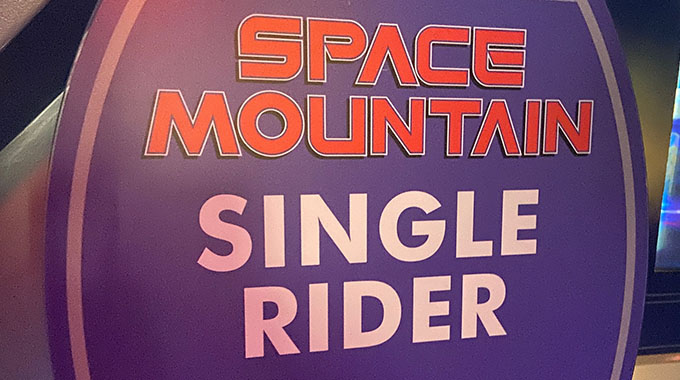 Many rides have single rider lines that are usually a shorter wait.

If you've got an older kid who's comfortable riding on their own, many rides have a separate line for single riders that's usually a shorter wait. Clever use of this option can cut down on waiting time and let you do more, Jessica says: "You can ride on more rides, and if you've got a favorite, you can ride it multiple times."

For families with young kids who can't or don't want to go on some rides, the ride switch service allows for other visitors to ride while 1 guest 14 or older waits with the non-rider. Once the first group returns, the guest who stayed behind can ride without waiting in line again.

FuelRod portable chargers are available at kiosks around the resort.

It's harder to get around Disneyland if your phone dies, especially since you won't be able to use the mobile app. Bring a portable battery to keep your phone topped off throughout the day. Jessica points out that if your kids have mobile devices, a charger will also help keep them charged up.

If you don't have or forget to bring a portable charger, never fear: You can buy FuelRod portable chargers at kiosks around the resort. Each can be recharged when it's expended, or exchanged at a kiosk for a fresh charger. 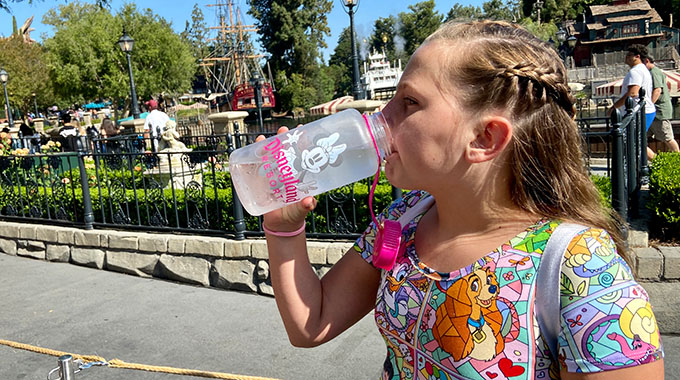 Bring a reusable water battle and Disneyland will refill it with free ice water.

Jessica advises bringing your own reusable water bottles, for 2 reasons. Since there are drinking fountains and refilling stations around the resort, it's easy to stay hydrated without paying for drinks.

The second reason? "You can get free ice water from the dining locations—just ask for ice water or a cup of ice," she says. "Having lots of cold water is great if you're visiting on a hot day." 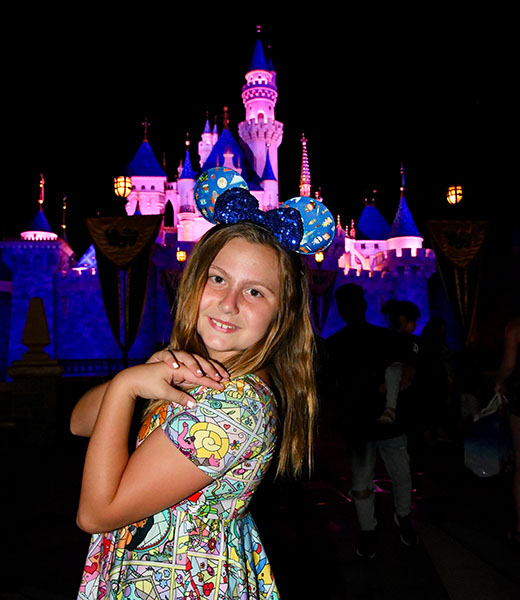 7. Hold on to the memories with Disney PhotoPass+

You can view and buy the photos individually after your visit, but if you know you want them ahead of time, Jessica recommends getting Disney PhotoPass+ One Day. "It's really convenient: $19.99 and you get all the photos for the day, no matter how many. It includes photos with characters too—look for them in the fenced areas."

8. Bringing a stroller? Make sure it's the right size

If you're bringing a stroller to Disneyland (which Jessica highly recommends if your kids are younger—it's a lot of walking for short legs), check that it meets Disneyland's size rules. Strollers larger than 31 inches by 52 inches are prohibited, as are wagons and stroller wagons.

Many attractions and venues are open in accordance with local government guidelines. Circumstances may have changed since publication; check attraction websites for current information and safety requirements.

Experience the magic of Disney vacations

Weave a little magic into your life with a Disney vacation package, including a hotel stay. Or take advantage of offers on select ticket options available only for AAA members.1